On one hand, I love seeing all of the new items in the S.T.Dupont booth at the annual IPCPR Convention & Trade Show. On the other hand, this post is not particularly fun to construct. The French accessory maker is traditionally responsible for the most amount of new products at the trade show, a longstanding tradition that will continue this year. S.T.Dupont is housed within the Davidoff of Geneva USA booth, its U.S. distributor, which got a makeover this year. Dupont’s section is more defined, now on one side of the booth. Like last year, there was a signature item roped off and with a massive price tag.

The flagship piece of the S.T.Dupont booth pays tribute to France’s history with hot air balloons. The balloon itself is bronze with various patina finishes. It rises via a motorized element to show off a solid yellow gold lighter that features 3.85 cts of diamonds and is modeled after Versaille. 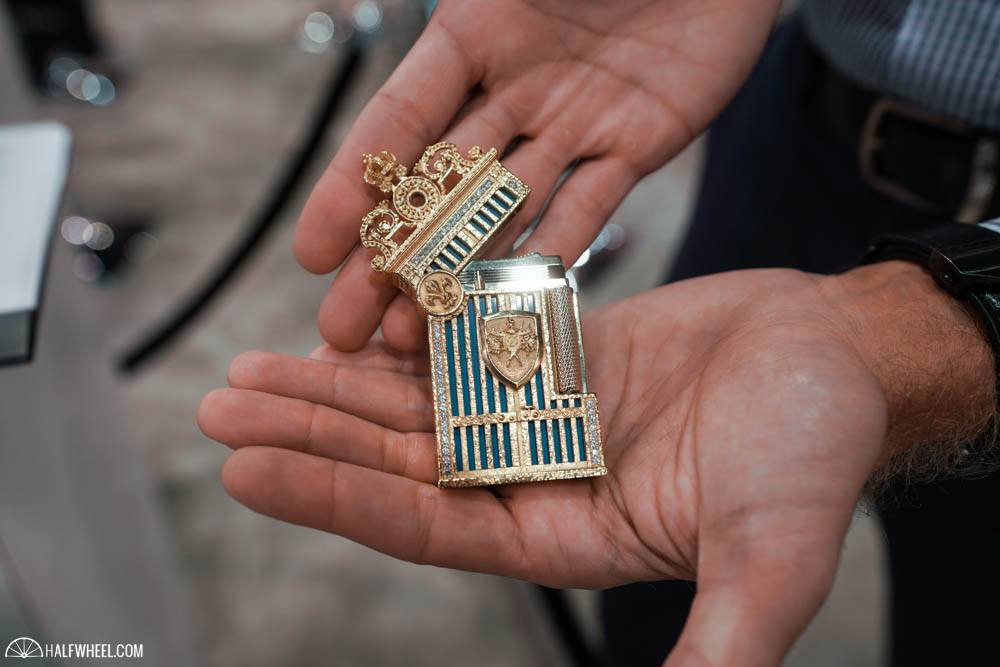 It’s officially listed as limited to eight pieces, though the number could be less as the price tag is massive. This is not the first time S.T.Dupont has created a James Bond 007 collection, though some of the items will be offered for the first time. The collection is shipping at three different times. Shipping in August are the following: This describes a variety of items, notably metal cigar cases that were shown off in Europe last year. In addition, there are two new colorways of the Le Grand Dupont lighter, as well as two new colors for the Maxijet cutter and lighter. Some items are shipping now, while others are expected by early October. The first batch, i.e. the one that is shipping now, includes:

In late September or early October, the second round of items is expected to begin shipping. That includes additional colors for the cases, as well as the lighter and colors. The new collection combines Dupont’s Firehead collection with the company’s famous lacquer. All four items are expected to begin shipping in August. This is not the first time the company has created a Picasso collection, but this time it is centered around the drawings in Profil de femme. Production is limited to 1,967 pieces of the Ligne 2 and Line D items, while the Writing Kit and Smoking Kit are both limited to 145 pieces. S.T.Dupont Year of the Dog Exclusive

This is made of bronze using yellow gold and lacquer as finishes. It comes with a sculpture base.

S.T.Dupont Year of the Dog Prestige

There’s a cheaper lighter—albeit still nearly $9,000—version that is just a Ligne 2 lighter. An accompanying fountain pen is priced the same and also limited to 288 pieces.

This custom Ligne 2 also comes with a custom base. While Dupont has done similar styles of custom metal work, the company says they are able to get better contrast with a new technique. There’s a matching pen, also limited to 88 pieces and also priced at $18,585. One of the more interesting pieces from S.T.Dupont, the Trojan Horse is an actual bronze statue of a horse that contains a special Ligne 2 Lighter inside. This is made of rhodium and shows much more contrast than just about any other S.T.Dupont lighter I’ve seen. It’s a somewhat larger production run given the details, but still rather limited. This is not for cigars, but S.T.Dupont has created an electronic lighter. The E-Slim features a variety of safety measures but is essentially restricted to cigarettes and cigarillos due to its small coil opening. It can be recharged via USB and does not require butane. If you’ve ever wanted to use the flat flame from the Slim 7 to light your candles, S.T.Dupont has made a lighter just for you. This elongated version features the same flat flame as the Slim 7, but designed for lighting candles.