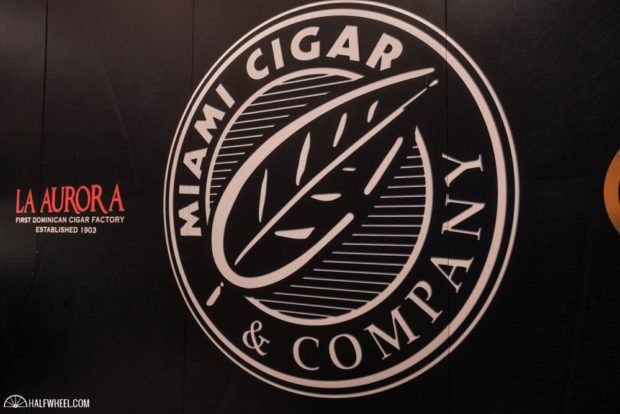 It’s the year of anniversaries and that’s definitely the case for Miami Cigar & Co. The company’s Tatiana line of flavored cigars turns 20 this year. While the brand certainly isn’t talked about much on this website, Tatiana alone outsells easily half of the company’s exhibiting at the IPCPR Convention & Trade Show. On the other end, Nestor Miranda—the man himself—turned 75 this year and he’s got a cigar for his birthday. That cigar is limited to 1,000 boxes, i.e., it probably won’t be outselling half the companies here by itself. As for the booth, Miami Cigar & Co. distributes La Aurora and Toscano in the U.S. meaning each of those companies gets a section of the booth. Toscano had a cigar roller, though she hadn’t arrived when I stopped by this morning. Of note, Viva Republica is no longer being distributed by Miami, so that branding is gone. The Nestor Miranda Collection isn’t 75-years-old, but Nestor himself is. He’s oftentimes referred to as “the most interesting man in the cigar business,” he’s oftentimes the best-dressed person at the IPCPR Convention & Trade Show and he’s a shark at the domino table.

Oh, about the cigar. It’s a Nicaraguan puro made in a 7 1/4 x 57 shape. Nestor also delivered the best sales pitch I’ve seen so far. Tatiana turns 20 with two new flavors, both in a 6 x 44 size. Carribean Chill is described as having flavors of “fresh mint, Caribbean rum and citrus,” i.e. a mojito. Harvest Moon is described as a mixture of “pumpkin, cinnamon and brown sugar.”