JetLine is one of a handful of companies who have had more-or-less the exact same trade show presentation style since I began attending the annual event, and while it may not have the elaborate design of others, it seemed to be one of the busier booths I passed by thanks to a steady stream of retailers and others in the industry checking out the company’s new wares. Under the fabric halo sign hanging from the ceiling are simply some glass display cases, a handful of tables, a vertical sign or two and piles of product brochures. 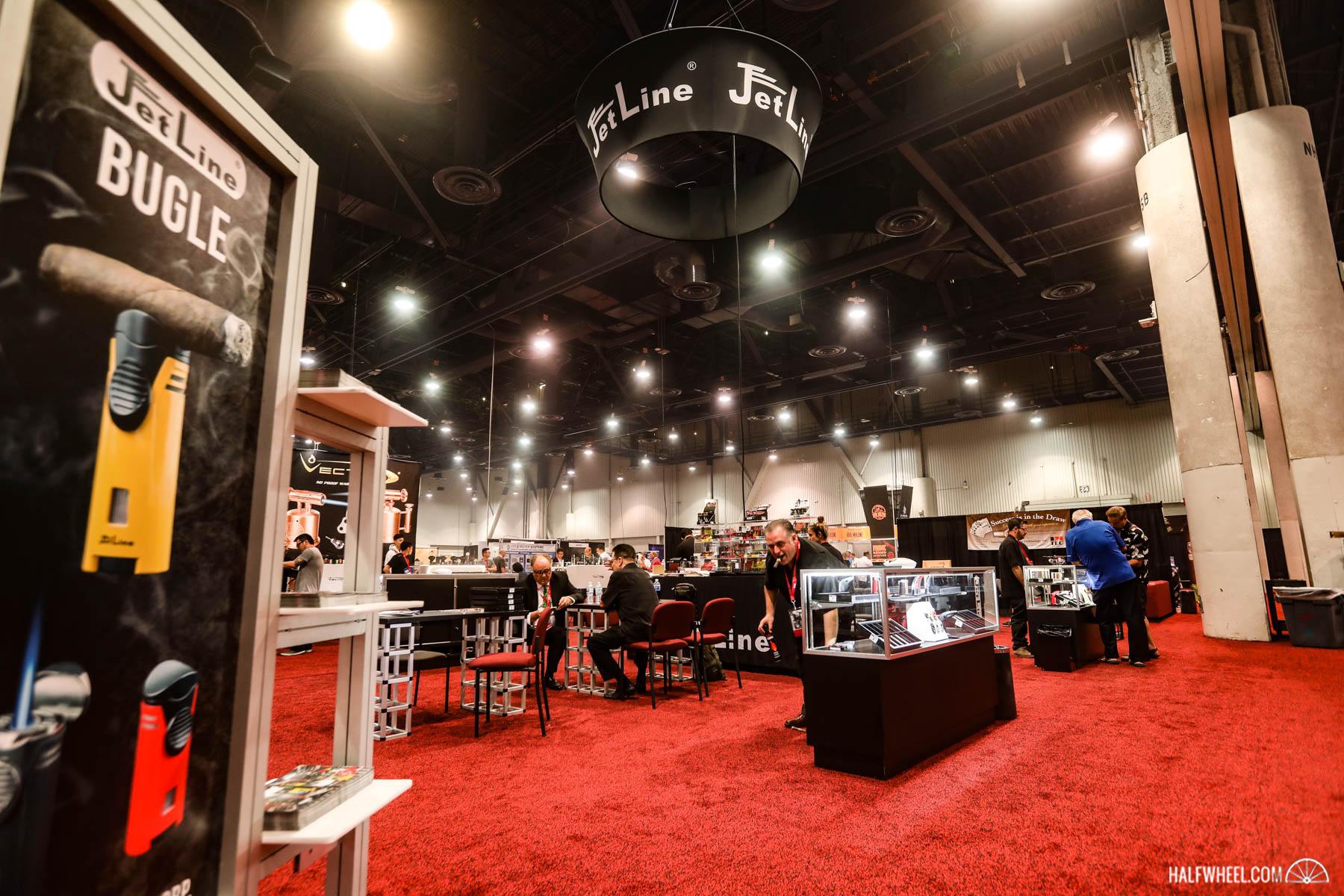 While JetLine has ventured into the higher end of the market in recent years with a $300 ashtray and $290 tabletop cutter, everything featured this year was under $50 and limited to the lighter segment. 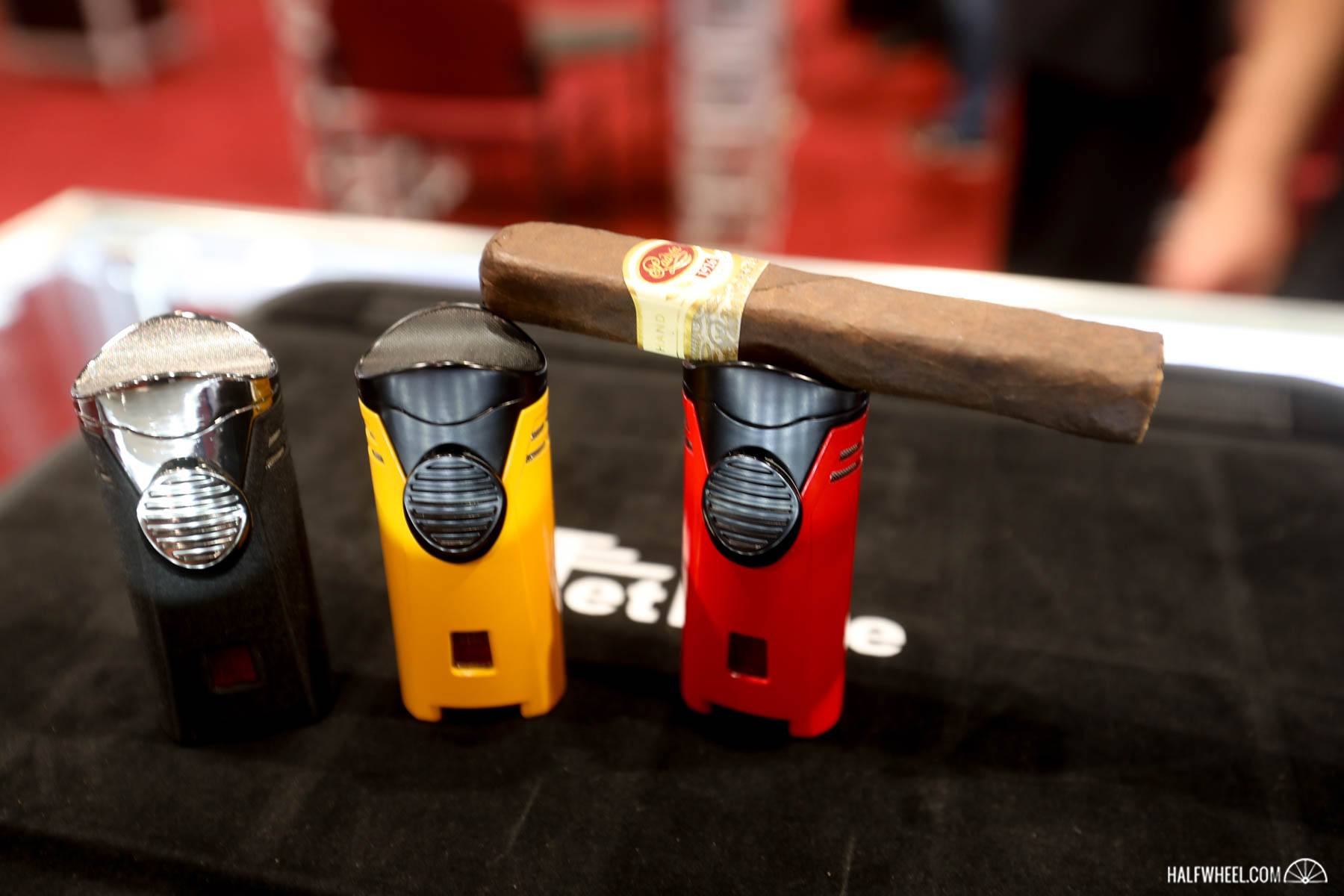 It won’t play “Taps” or make any kind of music, but it will light and then hold your cigar. That’s the story behind the JetLine Bugle, a new single torch that comes in black, yellow and red colorways. While still a pocket lighter, it’s a fairly large torch thanks to a large burner that cranks out an adjustable and much more substantial flame than your typical single torch. It also has a large fuel window on the front so you know when it’s due for a refill, and can hold a cigar with a ring gauge up to about 70 or so.

Another spin on the triple-torch plus punch cutter format, the Challenge C-300 is a single action ignition, with the large pull-down mechanism opening the lid as well as starting and igniting the butane. A good-sized window on the front of the lighter shows you how much butane you have left in the tank. It’s available in three colors: copper, red and gunmetal, each priced at $29.99. 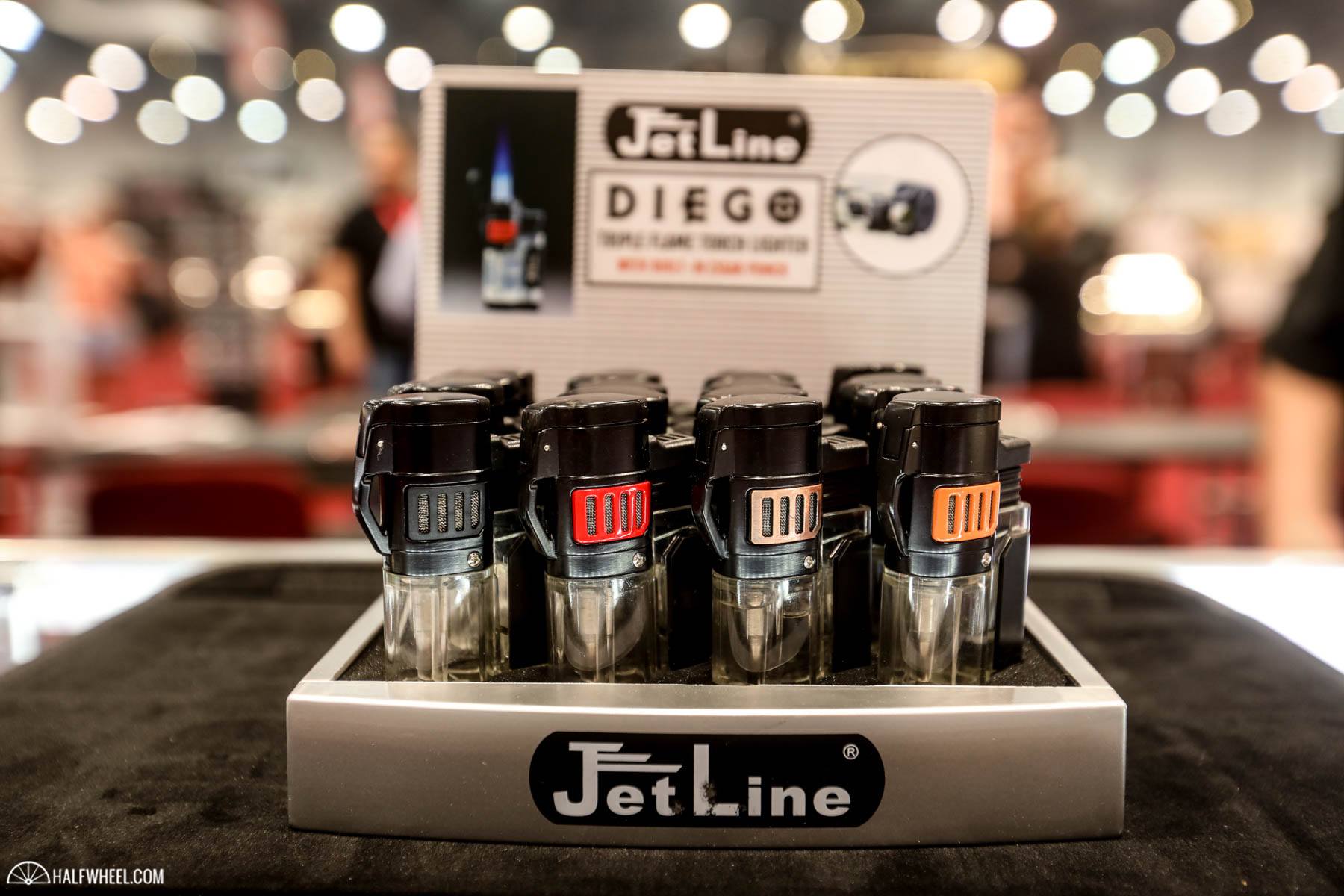 The lowest-priced of JetLine’s new offerings this year is the Diego, a compact triple-torch lighter with a translucent body to show how full the butane tank is. Its large single action ignition is complemented by a slide-out cigar punch and a convenient flame adjuster on the base. It’s available with black, copper, red or orange accents. 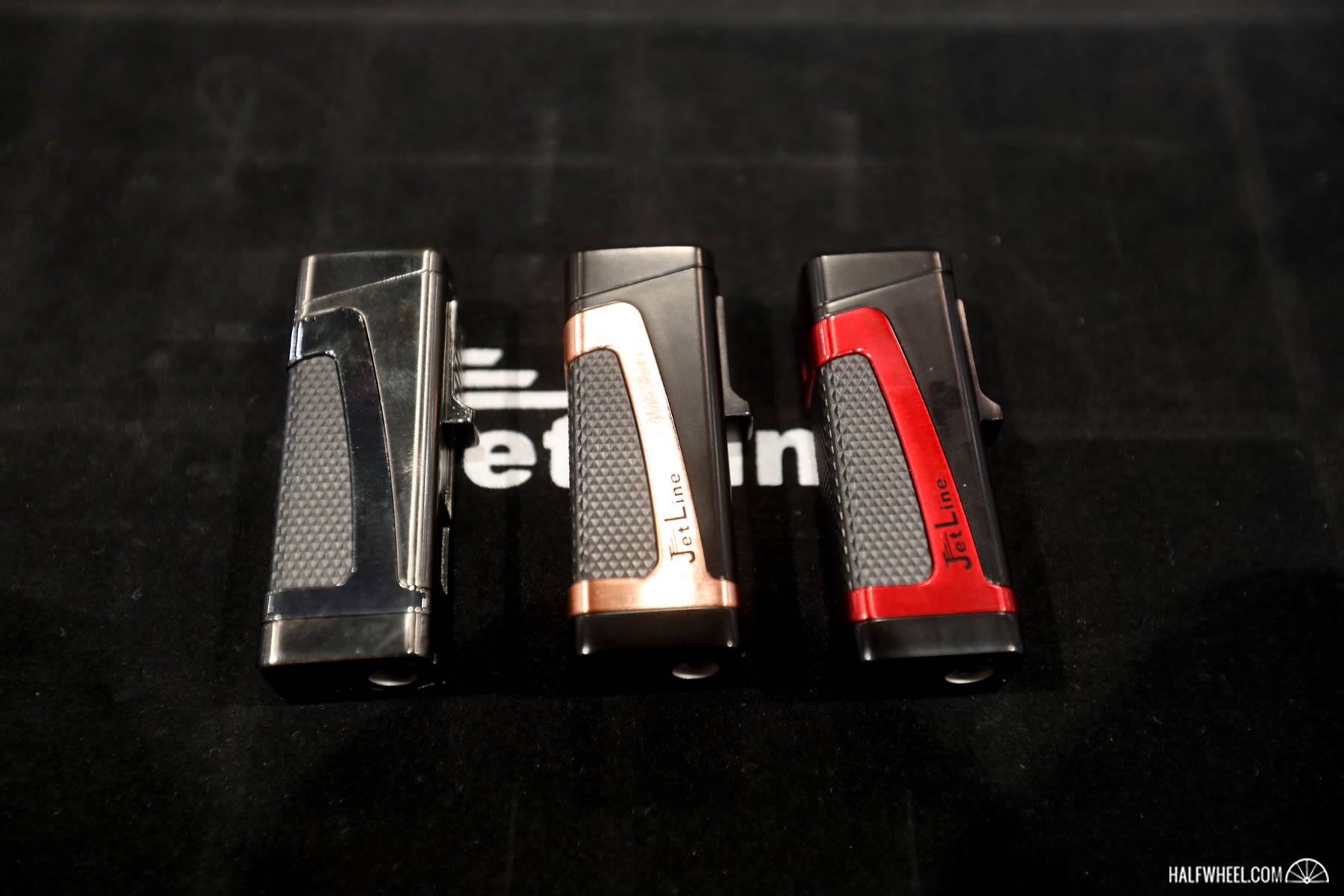 The Hurricane gets an upgrade, or as the company calls it, “a revival.” It sports an all-metal body and a manual, spring-assisted flip-top lid and an ergonomic ignition trigger. It puts out an adjustable triple torch flame and can cut your cigar with a built-in cigar punch on the base of the lighter, while also offering a color-changing fuel level indicator. It’s offered in gunmetal, copper, pearl red and black. 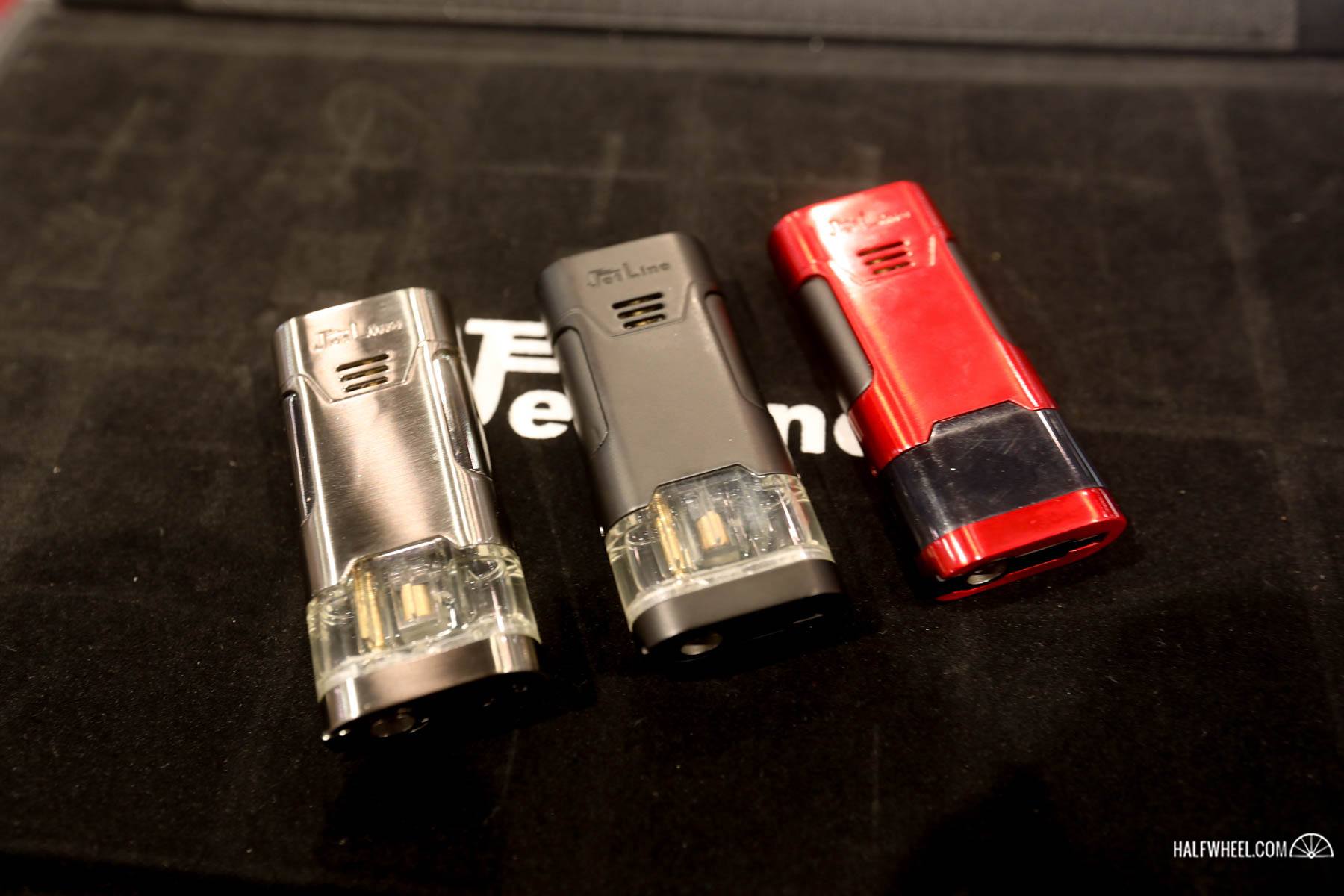 The new Jetline Mongoose is a bit reminiscent of the JS-100, which debuted earlier this year with a side-squeeze action, though this is bigger, packs three flames instead of just one flowering torch lighter and adds a punch on its base. One of the more interesting features is a clear lower quarter that allows you to see how much fuel is in the tank, while the rest of the body is made of solid metal. It’s available in three colors: pearl red and smoked black, gunmetal and clear and black and clear.

The popular JetLine Pocket Torch line is getting an updated lid design across the single, double and triple flame options. The new lid is a spring-assisted design and appears to be much more sturdy than previous iterations, though it comes at the expense of the Pocket Torch being a single action ignition as the lid will have to be opened manually. Even with the change, the company is keeping the price the same.