Inspirado Black. Inspirado White. General Cigar Co. makes it clear what it wants to talk about and there’s no question when you walk into the company’s large booth. It’s part of a large effort to rebrand Macanudo that has been taking piece by piece over the last few years. There hasn’t been a full-on Camacho, let’s blow up the portfolio, but the future of Macanduo is clearly Inspirado.

For much of the last half decade, General Cigar Co.’s booth has been the talk of the show. It started with the highly impressive Foundry section complete with steampunk theme, then there was the Foundry spaceship-like structure, Leccia’s wrestlers and then the more sparse booth that led to people asking what was wrong with the company.

I for one am a fan of the current configuration, which is nice and effective without being unnecessarily costly. At the end of the day, cigar consumers, not cigar companies, pay for trade show booths and General’s decision to cut down on at least some of its spending seems very much like the right one. There were two releases heavily promoted ahead of and at the IPCPR Convention & Trade Show: the Davidoff Winston Churchill The Late Hour and Macanudo Inspirado Black and Inspirado White.

The idea has been talked about before, a new take on Macanudo. I haven’t smoked the cigar, and haven’t talked to anyone outside of General that has smoked either, but the company says it will be a much different profile than the core Macanudo lines with White being the lighter version and Black being a strong cigar. General sponsored the kick-off party on Monday, which featured rolling demonstrations as well as the ability for attendees to smoke each filler component separately, something that I imagine will be coming to a Macanudo event near you. 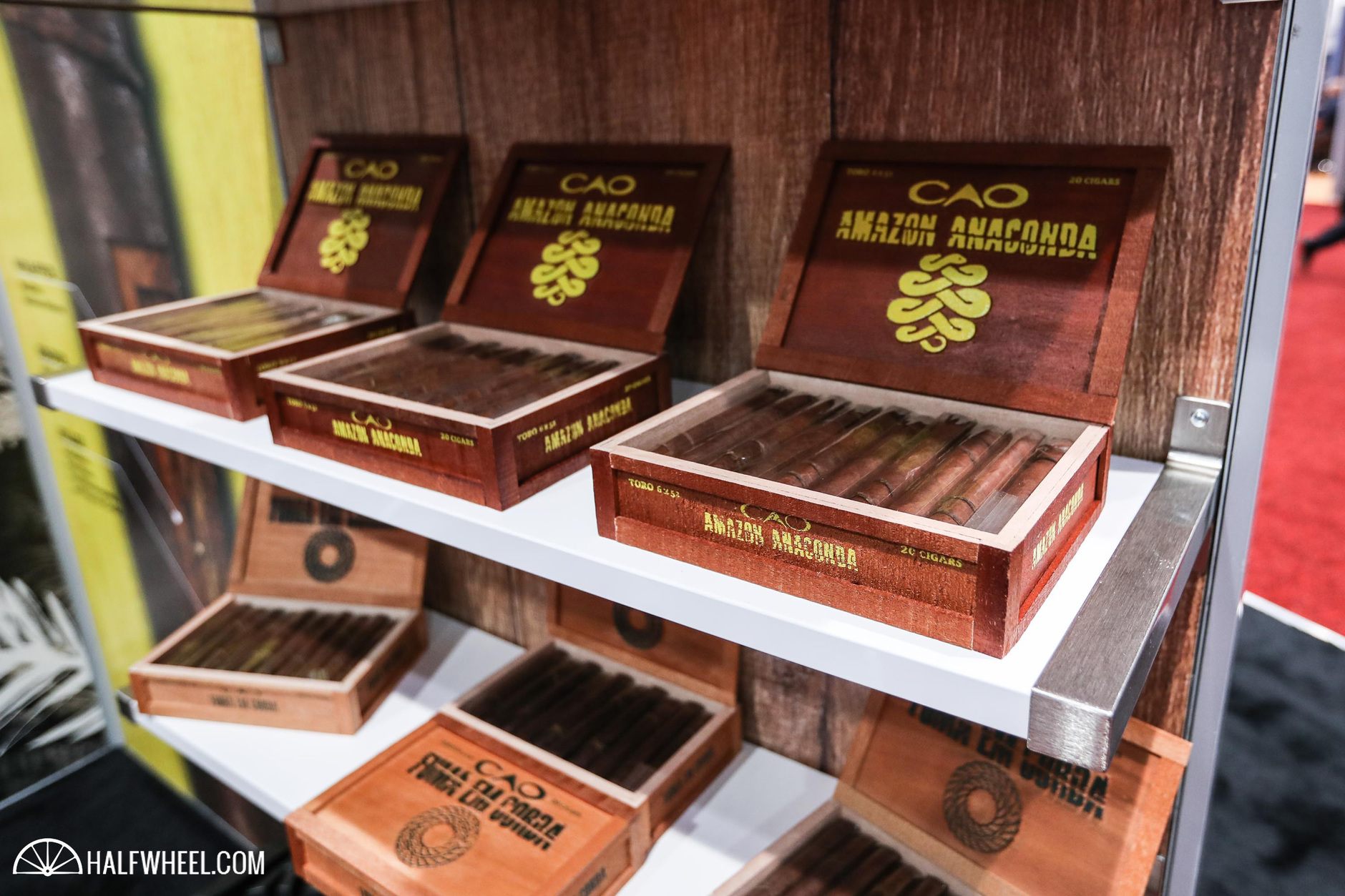 I remember being at the now-closed I Love Burgers restaurant in The Venetian and Brooks Whittington proclaimed that the CAO Amazon Basin was good, really good. It’s challenging to imagine that anyone could have seen the success of Amazon Basin, a limited release with a cult following created entirely by one of the largest cigar companies in the world.

Amazon Anaconda combines both the Brazilian Bragança made popular in the original Amazon Basin and the fuma em corda tobacco used in the eponymous release. It’s offered in a single 6 x 52 size and is limited. General certainly didn’t describe this as a one-time release, but indicated that the line would likely disappear for some time before it returned again. The company also says this is likely the only cigar on the market using Brazilian Bahiano as a wrapper. When this cigar was announced, it certainly raised eyebrows. Ernesto Perez-Carrillo Jr., who sadly was not in attendance at the IPCPR Convention & Trade Show due to family medical issues, was once again making a La Gloria Cubana. Perez-Carrillo Jr. sold La Gloria to General’s former parent company Swedish Match in the late 90s and then spent a decade working for the company before launching E.P. Carrillo in 2009.

As for this cigar, it’s being produced at Carrillo Jr.’s Tabacalera La Alianza S.A. using tobacco from both Carrillo and General. The cigar is packaged using boxes made at General’s impressive Dominican box factory ad is being sold by General. It’s also earned some rave reviews by those in the industry.

Of note, Perez-Carrillo Jr. will be doing some events at shops promoting the new release. This is likely the largest news out of the General booth: the company is selling Diesel, a brand built by its sister company Cigars International.

This is a new version of Diesel Grind and it appears the sizes are different from previous renditions. Given that the General booth was my first stop of the trade show, I’m curious to see how the new line was received by brick and mortar customers given Diesel is one of the staples of CI. It’s worth noting, General says this is brick and mortar-only. The Partagas 1845 line has been completely revamped. The bands are the same, but the boxes and more importantly, the blends, have changed. All three lines will ship in August to both brick and mortar and catalog retailers. It’s the follow up to the original La Amistad, one of the A.J. Fernández-produced General products from the last year. The original features gold accents, which is the easiest way to tell the lines apart. I admittedly walked by it a few times because I didn’t realize this was the new version. The big difference here is that this cigar is produced with entirely habano-seed tobaccos. The most ambitious product in the General Cigar Co. booth is aptly titled The Ultimate Accessory Collection. It’s a pair of cigar accessories: one triple-flame torch and one guillotine cutter. Both feature ebony lacquer accompanied by stainless steel and palladium. The cutter was of particular interest as the bottom blade actually moves inward as the cutter closes. The original Macanduo Inspirado line will get a tubo for the U.S. market. This is actually the third tubo for the line after two were lunched in Europe last year. Along with Diesel, Humi-Care—Cigars International’s private label brand of humidification products—is now being sold by General and its sales reps. I think this is actually a really smart move as General will likely be able to undercut XIKAR and some of the other companies competing in this space.

It’s not the full line of Humi-Care, for example, the brand’s blue electronic humidifiers are not being offered, but it’s a pretty wide array of offerings.