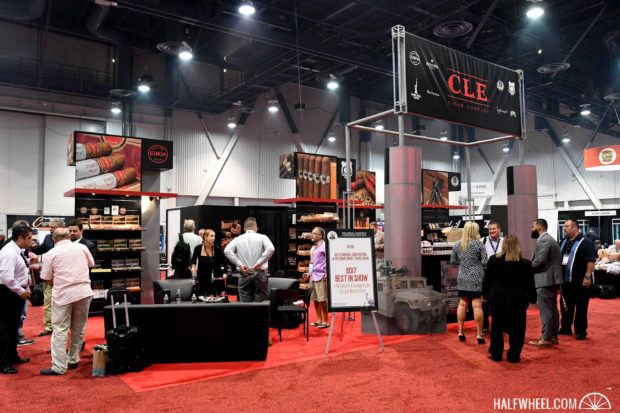 The CLE booth was new this year, and it’s a good thing since the number of people they see come through overwhelmed the enclosed walls of the previous design.

While the crowds are a testament to the cigars that CLE makes and distributes, I’m sure it helped that they also were giving away a Humvee. Unfortunately, because of some delays with the paint job, it wasn’t actually on the show floor as they originally planned. There wasn’t anything new as far as cigars go, but there were some packaging changes and some items that they were showcasing. CLE New Packaging
In what they promised was the last change to packaging for a long time, the CLE lines got all new packaging that was more shelf-space friendly for retailers. Also of note, the majority of the packaging is from sustainable sources within Honduras, even down to the tissue paper wrapping the cigars instead of the previous cellophane. The effort is part of the goals of the CLE Foundation, the primary goal being scholarships for local children in Honduras, while secondary and long term goals include environmental ones such as reforestation and eventually renewable energy such as wind and solar farms. CLE Azabache
Not a new line – but now available as a wide release, instead of limited production that was only available to TAA members.