I’m the outlier of the halfwheel staff. The standard is a MacBook Pro and a Canon DSLR. I however have done things a little different, so you’ll see some differences in my bag than the other three staff members. 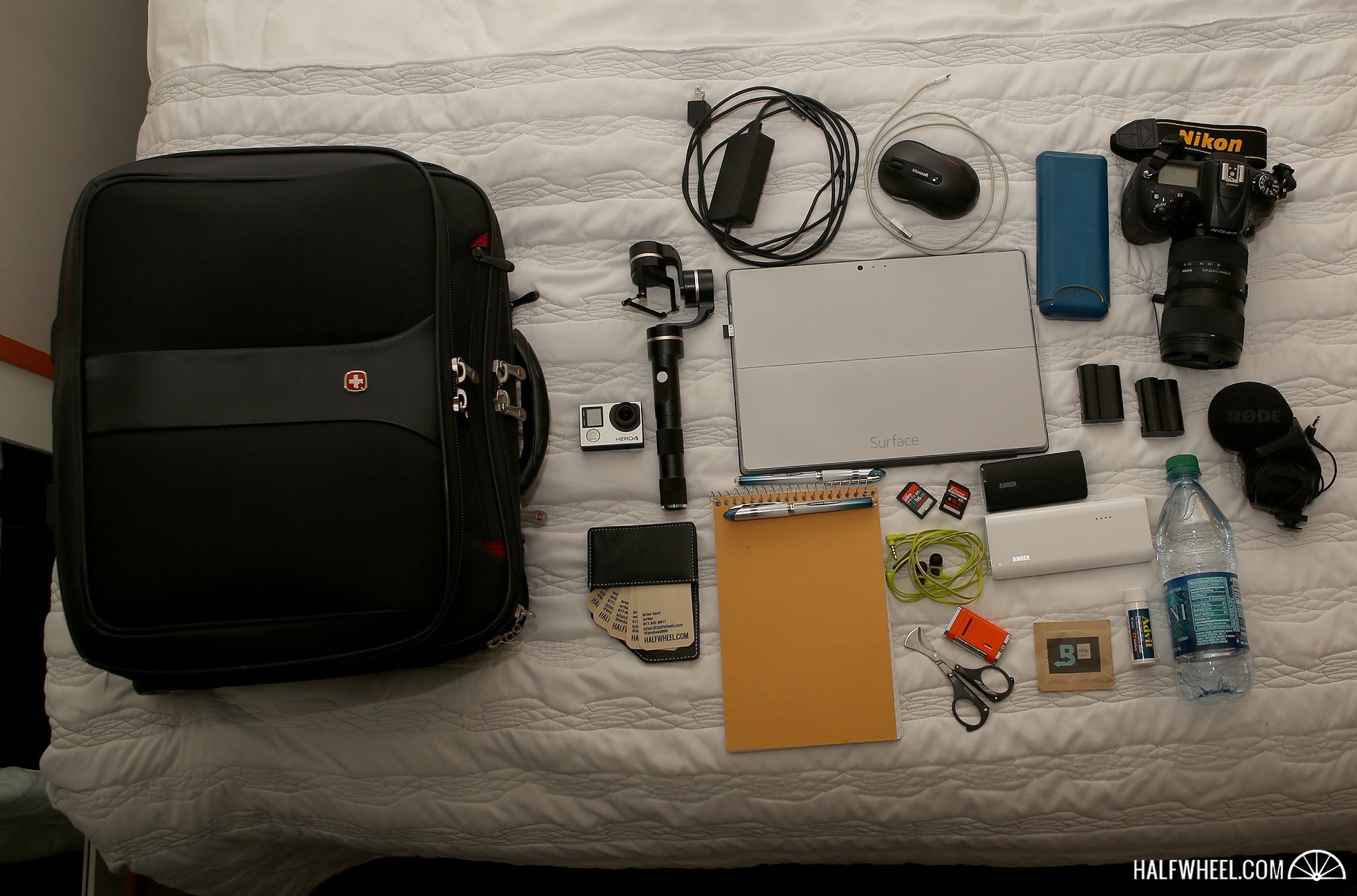 To start off with, it only took me one trade show to know that I didn’t want a backpack, so I went with the Wenger Patriot rolling bag. With plenty of document storage, pockets, laptop storage and a large compartment in the back for all the rest of my odds and ends, it’s the perfect bag to keep the stress off my shoulders while still carrying all my gear.

Inside the first and most important piece of gear I have is the Nikon D7200 camera with a Sigma 18-35mm f/1.8 lens. Along with that I have a couple of extra batteries, two 32 GB SD cards (not pictured – in the camera) and two 16 GB backup SD cards. In addition since we’re shooting video this trade show, I have the Røde Stereo VideoMic, which while not perfect in a loud environment, is certainly better than the on-board mic.

The next vital part of my setup is my Microsoft Surface Pro 3. A recent switch from a 12 pound HP laptop, its portability, power and overall ease of use is a massive improvement. Accessories for that include a charger and an external mouse, because even as great as the touch screen is, the mouse is a quicker and better option for much of the work we do.

One thing I haven’t used yet but have some potential plans for is the GoPro Hero4 Silver and a Feiyu-Tech G4 handheld 3-axis gimbal. The gimbal keeps everything smooth even when you’re bouncing around the floor and should produce some buttery smooth footage.

Random necessities that have found their way into my bag also include my halfwheel business cards in a Xikar business card case, a notepad and pens, iPhone charger, two Anker USB chargers, headphones, water, and Advil.

The last few things that are small but essential to cigars, are my XIKAR MTX Scissors, a XIKAR Allume lighter, and for those cigars I want to keep extra safe, a Warped three finger case.

Some people might think that this isn’t enough and others too much, but four shows in, this is the setup that seems to work pretty well for me. I’m sure next year will be different, but that’s for another post!