While it wasn’t stated outwardly, there seemed to be a bit of a hint that La Flor Dominicana is evolving, as some new cigars debuted while some familiar classics returned. The booth was largely the same as in years past, and it’s still a showpiece on the floor that is visually open and inviting. Some graphics have changed to keep up with the latest LFD offerings, as is to be expected. Headlining the new releases is Chapter One, a cigar blended by Litto Gomez’s son, Antonio. He’s been working more and more in the factory over the past year after largely being in sales for the company, and this is probably the most visible sign of things evolving at LFD. The cigar uses a Brazilan Oscuro wrapper with a Connecticut Broadleaf binder and Dominican filler and will only be available in a 6 1/2 x 58 box-pressed Chisel vitola. It will come in boxes of 10, with production estimated to be around 10,000 boxes. A second edition of the Factory Press Limitado was unveiled in a single 6 1/4 x 60 vitola. It uses an aged Ecuadoran Dark Sumatra wrapper with a Nicaraguan binder and Dominican filler, and the band is updated to say “F.P.L.” instead of Limitado.

Twelve count boxes with an MSRP of$14.50 per stick and $174.00. Production numbers are limited by the amount of tobacco in the warehouse, but Antonio Gomez estimated it at around 100,000 cigars. 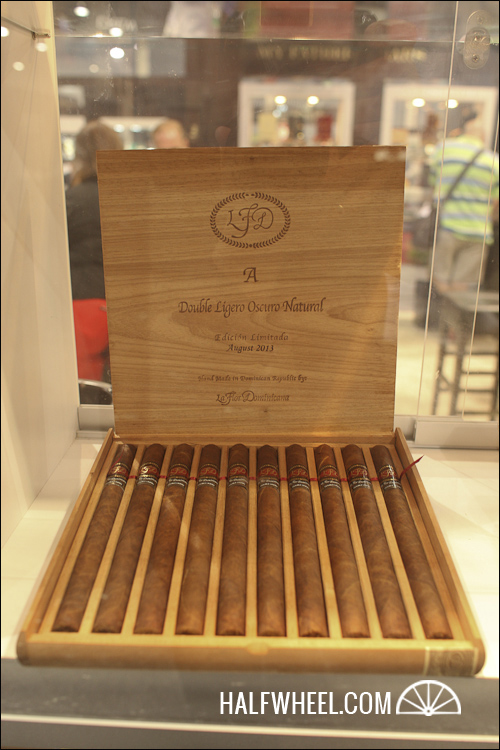 Also making a second appearance is the Double Ligero A Oscuro Natural August 2013. Another single vitola release, it measure 9 x 47 and comes in 10-count boxes, with an MSRP of $15.00 per cigar and $150.00 per box. The cigar updates the wrapper from the Ecuadoran Oscuro wrapper used on the 2007/08 version to an Ecuadoran Ligero Sumatra. The binder and filler remain all Dominican. The lid of the box also features a laser etching of the front of La Flor Dominicana’s new factory. Antonio Gomez told me it takes 30 minutes to etch each box, and–somewhat jokingly–said they’re going to keep making the cigars until the machine breaks. The Ligero, Suave and Air Bender lines are getting tubed versions, with the Ligero adding a new L100 vitola that measures 5 1/2 x 42. The L250 is also getting a tubed version, as are the Insurrecto Suave, Maceo Suave, Air Bender Matatan and Air Bender Poderoso, all existing vitolas. The company said the tubed version should add about $0.25 to the cost of each stick. Beyond that, the popular Colorado Oscuro returns for its third year, while a couple hundred more cases of the Factory Press IV have been released and will be available to retailers. Last up, and not on display, was the Litto Gomez Diez Vintage 2013, which is available only to select retailers. Ten total vitolas with MSRPs between $8.48 and $13.02 per cigar.