There are a few companies that don’t worry about the trade show: Arturo Fuente and Padrón. After the delay to celebrate its 100th anniversary, Fuente seemed slightly overshadowed by the plethora of releases from J.C. Newman. The booth was noticeably less crowded—meaning busy, but walkable, but as anyone at Fuente will tell you: it’s just another week they get to spend with friends. 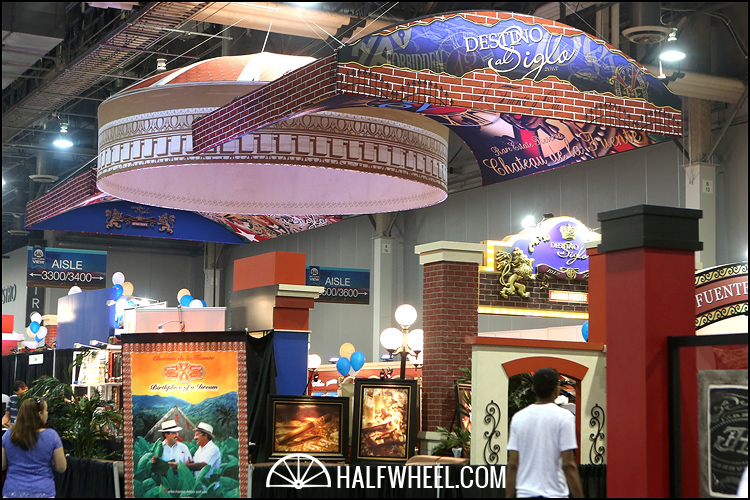 The Booth
It was the same massive booth, with ceilings, that the company debuted last year for its 100th anniversary. Missing this year, the “no new accounts” signs the company normally brings to the trade show.

Arturo Fuente 8-5-8 Sun Grown
Back by popular demand. Well, that’s what we were told. This was part of the Fuente promotion: retailers could purchase one box of 8-5-8 Sun Grown in exchange for purchasing 25 boxes of regular product. The other specials were the two FFOX sizes below and Casa Cuba. Arturo Fuente Don Arturo Aniversario Destino al Siglo
It’s here. I was told we will see this later in the year, my guess is probably part of the traditional Fuente holiday shipment. Not that this is confusing at all, but unless you were given a cigar by the family, if it says “Destino al Siglo” on it, it probably isn’t the real thing. And for the record, you’ll know when you get a real one. This was the best cigar I smoked at the trade show last year, not even close. Casa Cuba
Two years after Fuente first brought them to IPCPR—to show off to no one—Casa Cuba was on display and orders were being taken. It was the same story as 8-5-8 Sun Grown: purchase 25 boxes of regular product and you can purchase one box of Casa Cuba. There were only 1,200 or so boxes available, and Fuente isn’t specifying what size will ship in August/September, but Casa Cuba will eventually be released in full. Diamond Crown Black
Not as popular as we thought. Details are here. There’s also one in the TAA pack. Fuente Fuente OpusX Destino al Siglo
Offered in Phantom (7 1/2 x 41) and Super Belicoso (5 1/2 x 52) sizes. Retailers were offered a chance to purchase a box of each for purchasing 25 boxes of regular product. We have been told these are “tweaked” versions of the OpusX blend, although Fuente wouldn’t explain much beyond that. Opus22
Here’s the link to our coverage of the Prometheus booth.