.The focus of Drew Estate’s IPCPR is Joya de Nicaragua’s Cuenca y Blanco. The cigar, which is the work of José Blanco is the center of attention thanks to the lack of debut for Willy Herrera’s Herrera Estelí. Despite a year with less buzz on paper, the Drew Estate booth remains as busy as can be with the normal sounds of hip-hop, the signature of Jonathan Drew & Co’s trade show operations. Joya de Nicaragua Cuenca y Blanco
The five vitola line has been the work of José Blanco and Dr. Alejandro Martinez y Cuenca since Blanco joined the company last August. Brooks covered most the details a few days ago when he reviewed the Lonsdale Club. Liga Privada Único Serie Papas Fritas
There’s a new Liga Privada, it’s available and it’s $6.00. Papas Fritas has been a long-time coming and is finally ready with four-count tins. Saka says the inspiration for the tins comes from the tins that were used in first class airlines in the 1950s. Cigar-wise, the blend comes from a mixture of clippings from Drew Estate’s Liga Privada No. 9 and T52. While the price might seem high for a mixed filled Corona, it’s Liga and it will sell. 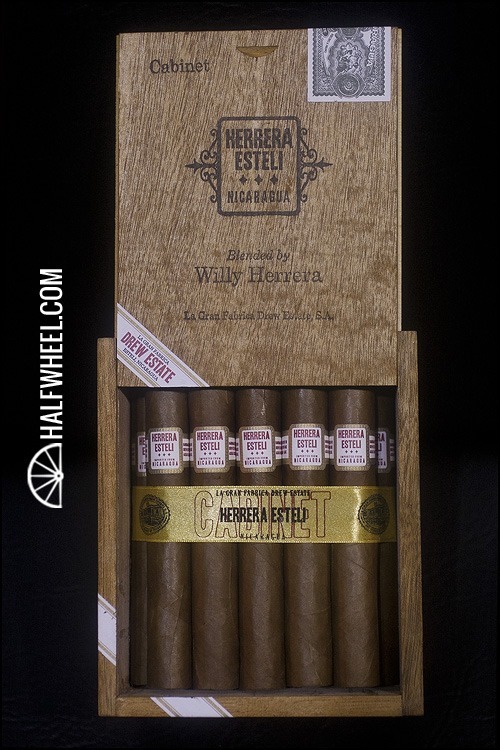 Herrera Estelí
Willy Herrera’s new project was at the show, but not available for sale or public consumption. There still isn’t a timetable on a release point, but the packaging is relatively finished. It’s finished and it’s lighter than MUWAT and Undercrown, and quite good.

My Uzi Weighs a Ton +11
It’s the newest MUWAT, this time a 5 1/2 x 52 Robusto Extra that is neither a pure MUWAT blend or the amped up MUWAT Extra Fuerte. Jonathan Drew told halfwheel it’s slightly stronger than the regular MUWAT, but not an EF. Pricing is $7.95. Natural NDB T
he national sales manager Lonsdale was also not shown, but is supposed to debut here. G-Fresh
Launching next week in Circle K, Drew Estate has packaged select ACID sizes in single packages with Bovedá packs. In addition to the new products Drew Estate’s upper management will be getting some new rules. — More to come. Steve Saka reiterated that the Tubos, despite the packaging, are unlikely ever to be for sale.