Publicly, the biggest news regarding Oliva and the 2011 IPCPR was the court order that prevented former employee Sam Leccia from attending the trade show. Despite a fairly one-sided discussion on various online format, numbers don’t lie and Oliva wasn’t really worrying about a Miami courtroom. An Oliva employee was trying to explain just how good of a day they had on the first day of the trade show, the simplest explanation: a few years ago Oliva opened the trade show with what had been their best sales day ever; July 18, 2011 nearly doubled that number. More after the jump. Cain Daytona Lancero
A few months ago the Oliva reps started taunting me with a cigar they had created for themselves, it was the Cain Daytona Lancero. Earlier in the year, the folks from Cigar Journal, formally European Cigar Cult Journal, visited the factory and were looking for something unique. Carlos Oliva intended to hand them a Cain F Lancero, but instead, he handed them a Cain Daytona Lancero. Fast forward a few months and the cigar was named Nicaraguan Cigar of the Year by Cigar Journal. There were fifteen bundles made and the reps were giving them out like candy, until the cigar got the honors. These will be made into some sort of production, but Studio Tobac hasn’t figured out how to exactly going about doing this. Cain F Lancero
There were a few hits at the show, the Cain F Lancero was one of them. At $6.50, it’s nothing short of ridiculous. You can read my review here. These ship in October and are limited in production, although we are likely to see another release next year. Connecticut Reserve Petite Corona
These shipped before the show, but they aren’t on a let of shelves it seems, that should change now. Oliva Master Blend Humidor
Not a real lot of info here. They do exist, they do contain all of the Master Blend line, and they are coming. Currently there are less than five and we should be seeing them sometime in 2011.

Serie V Maduro 2011
A few were privy to seeing this, or at least what was a fully banded prototype. It’s a 6 x 50 Toro, the first Parjeo for the annual Maduro.

Serie V No. 4
Not really a whole lot needs to be said, these are now available to all accounts. 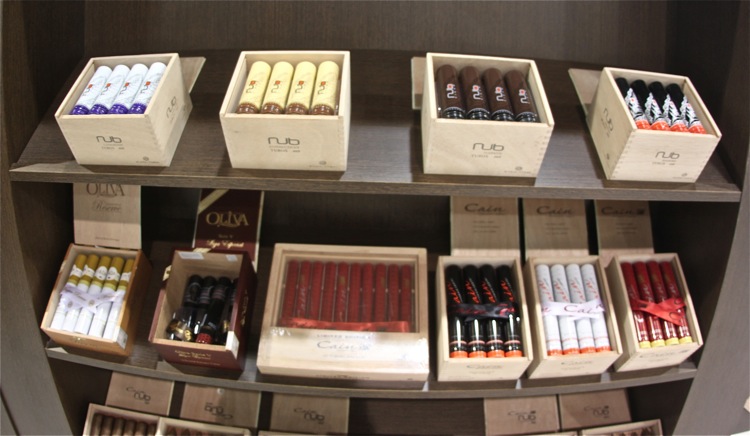 Studio Tobac
The quiet force behind Oliva, Studio Tobac still has a bit of an awkward position within Oliva, however, there’s a lot more coming from the project that has been public for less than a year. From what I was told, the innovation aspect of Studio Tobac should pick up in the future. Tubos
They were all over the place. All the info about the new packaging can be found here.

Someone last night found my site searching “Oliva cigar boycott” on Google. For those wondering about retailers boycotting Oliva, the aforementioned Monday and what was a filled waiting room on Wednesday says that the hoopla might be a bit overblown. As far as Oliva is concerned, they are selling cigars, which has nothing to do with what their attorneys are doing in the courtroom. More to come on this, sometime next week. — el niño diablo.