A few months ago, Jose Ortega and Janny García stopped by Dallas. We spoke about a lot of the new releases that were planned, including those at IPCPR. TheCigarFeed broke the news on the star of the My Father booth back when the García family’s company was featured in the State of the Brand series. Ultimately, it was more than just the Jaime García Reserva Especial Limited Edition that made for (yet) another busy year for My Father at the trade show. 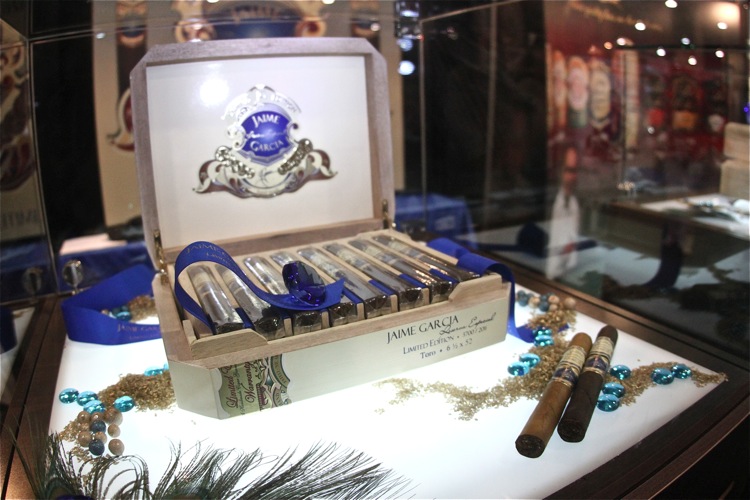 Jaime Garcia Reserva Especial Limited Edition
The particulars are: same Broadleaf wrapper as the regular Jaime Garcia Reserva Especial, two leaves of Pelo de Oro and other fillers. It’s 6 1/2 x 52 with a MSRP around $16.00. I have to imagine it was Jose Ortega’s idea, but the cigars are sixteen to a box, fifteen of the Broadleaf wrapped limited editions and one Connecticut-wrapped one. There are only 3,700 boxes and they will debut at the Khalil brother’s Casa de Montecristo in Countryside, Illinois on August 8th. (Last picture is what the current stash looks like at Casa de Montecristo.) My Father Humidor
The plan is still have these out by the end of the year. (Original plans were for July, but that seems far off…) Three-hundred, made by a single person in Nicaragua. These will feature fifty My Father Limited Edition 2011s, fifty Jaime Garcia Reserva Especial Limited Editions and five My Father Salomones, a product that was shown off at the 2010 IPCPR, but never sold. Also included are a cutter and lighter from Xikar. So… that doesn’t sound like a busy show. Sales are not directly tied to new releases, the My Father booth has seemed content on proving that considering a total of three releases in the past two years. The noticeable change in 2011 from 2010 is the amount of clients that My Father has taken on: El Tiante, a complete reblend of Forcade and the rumored line for Gary Griffith. Sources indicate that despite the increasing amount of new releases, the factory has a significant amount of capacity left in production. In addition to the launch of the Jaime Garcia Limited Edition, the family still has a planned party for the newly-opened headquarters in Miami and a lawsuit with Eduardo Fernandez that very easily could go down as the biggest the industry has ever seen. Jose Ortega had hoped for a 6 x 60 in the My Father line, and it sounds like that might be on hold. Next year is likely to see the debut of La Dueña, Janny García’s cigar, which is expected to be noticeably different from the rest of the My Father line-up and debut at the 2012 IPCPR in Orlando. — el niño diablo.