While the approach of Jesus Fuego’s booth at the 2011 IPCPR show seemed a bit quieter than the prior, the booth felt busier in terms of actually business. (So busy, that I really didn’t have much time to speak to Jesus while in the booth.) It was a mix of extensions, reblending and preview for Fuego this year, and in the midst of all that, Jesus along with Plasencia’s Tabacos de Oriente delivered one of the best cigars of the show and likely of the year. Origen Maduro Fuego is showing off next year’s Origen Maduro in his Signature Collection sampler, which includes his five current (premium) blends plus the new Origen Maduro. Royal Nicaraguan
Fuego’s bundle line is getting a reblend ahead of what is supposed to be a more committed national approach.

Sangre de Toro 6 x 60
One of two new extensions toFuego’s newest line, this time in the sales-friendly 6 x 60 format. Jesus thinks it has the best flavor of the line, which is saying something… 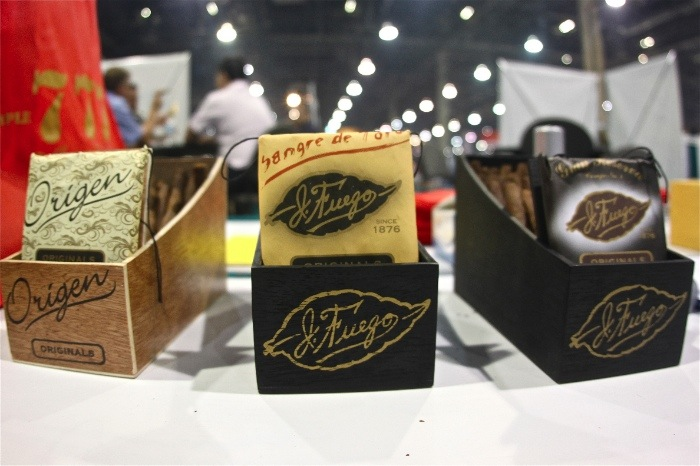 Sangre de Toro Originals
When people asked what I was liking at the show, it was a short list. At the top of said list… Sangre de Toro Originals. Many times when you take an idea that sounds great on paper and turn it into reality, it fails. This is from the case. The Original size of the Sangre de Toro is unbelievably good, everything you could have wanted wanted and more. It is an absolute flavor bomb and one of the only cigars that was able to really stand out by Day Two of the trade show. These are shipping now and a must for post-IPCPR purchases.