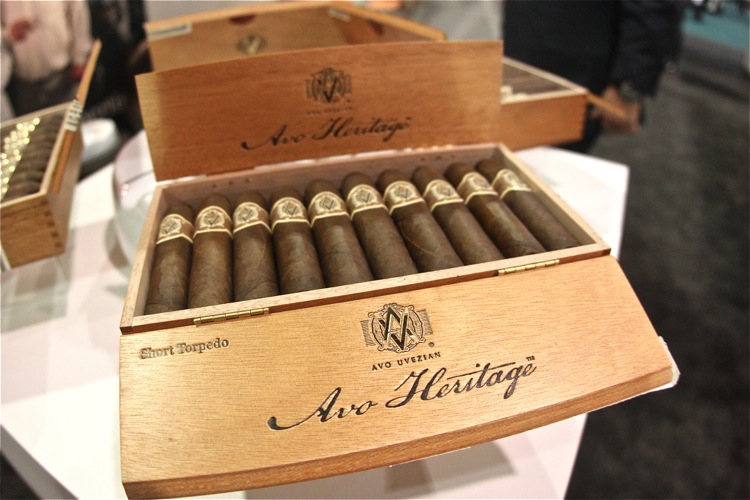 There are a lot of new faces at Davidoff, a lot. Some are formal additions like Matt Booth and Dylan Austin, who moved Room 101 and Camacho into the maze that was the winner of the large booth award at the show. Others were additions like Jim Young, the new North American President of Davidoff of Geneva, and Ron White, the newest ambassador of Zino Platinum. And then were the faces that had left: Danielle Hawthorne, former brand manager of Davidoff, who is no longer in the industry; and Michael Herklots, who left his position of General Manager of the New York Davidoff stores to join Nat Sherman. After the jump, a noticeable lack of faces and the rest of the pics from inside the maze.

AVO 787 Despite this confirmed report earlier in the year, it seems the 787 has been offered to retailers again, without the expected changes. Camacho Liberty Series 2011
The next release, details are here. Davidoff LE 2011 “White Edition”
It’s a 5 1/2 x 52 Belicoso Supremo, retailing at $19.00. Filler is San Vicente and Piloto, a Peruvian Corojo binder and Dominican Corojo wrapper. There are 8,000 boxes of 10 to be released starting in September. Winston Churchill Lancaster
I’m not really sure if it’s a true IPCPR release, but the new 4 1/2 x 46 Belicosos are packaged four to a tin, not to be confused with the Spitfire (4 x 38) in tins of five. All signs point to some repackaging of the line. As for the larger picture at Davidoff — the revolving personnel door at the top seems to still have plenty more spinning left, more to come. — el niño diablo.