At this year’s IPCPR Convention & Trade Show, Davidoff announced a new plan for retailers who sell its flagship white label Davidoff brand, an anniversary program. The program gives retailers who are celebrating major anniversaries a chance to get their stores name on a special cigar. Davidoff selects a specific vitola—this year is a 5 1/4 x 54 “robusto gordo”—and makes a handful of different blends from which retailers can select their own cigar.

We are told that the blends are not identical to existing Davidoff blends, for example, you should not be able to choose a Millennium Blend in a 5 1/4 x 54 format—and that multiple retailers could in theory choose the same blend. Each retailer must purchase at least 300 boxes of 10, although they can order more and the cigars are shipped at the same time. This year four stores took part in the program: Blend Bar Cigar of Indianapolis, Ind.; Cigar on the Avenue of Winter Park, Fla.; Club Humidor of San Antonio, Texas; and Tobacconist of Greenwich of Greenwich, Conn.

While the program is generally designed to celebrate major anniversaries, Blend Bar Cigar, previously known as Indy Cigar Bar, is only celebrating its first year under the new name and has a Davidoff exclusive to go along with it. The Davidoff Blend Bar Cigar Inaugural Anniversary is limited to 500 boxes with cigars priced at $29.50 per cigar.

The store says the blend uses a Connecticut-seed Ecuadorian wrapper designated as “Colorado Claro.” Underneath is a Dominican San Vicente binder aged for four-years and five different filler tobaccos from the Dominican Republic aged four to seven years make up the filler. The goal was to get close to the Davidoff Limited Edition 2009 Selección 702. On Aug. 18, the cigars went on sale at an event with Henke Kelner. The store says it has around 350 boxes remaining.

Blend is actually the only store that is disclosing the blend of their particular cigar. Davidoff declined to comment on the specific, explaining that all promotion for the project is up to the stores. Cigarz on the Avenue also received 500 boxes for their anniversary. While it’s not disclosing the blend info, the store told halfwheel it does have five different ligero fillers and hinted that the cigar packs a punch. Pricing is set at $34.99 per cigar and the store said it has around 340 boxes left after going on sale on Oct. 16.

For Club Humidor, it’s not even a matter of choosing not disclose the blend, they simply do not know.

“I didn’t even want to know the blend,” said Keith Rumbo, who owns the San Antonio-based chain with his wife Tiffany. Rumbo and his staff tasted each of the blend options blind and liked the winner well enough that it really did not matter what was inside the cigar.

They took 300 boxes, priced at $20 per cigar. The Davidoff went on sale at the store’s annual cigar dinner on Oct. 11. 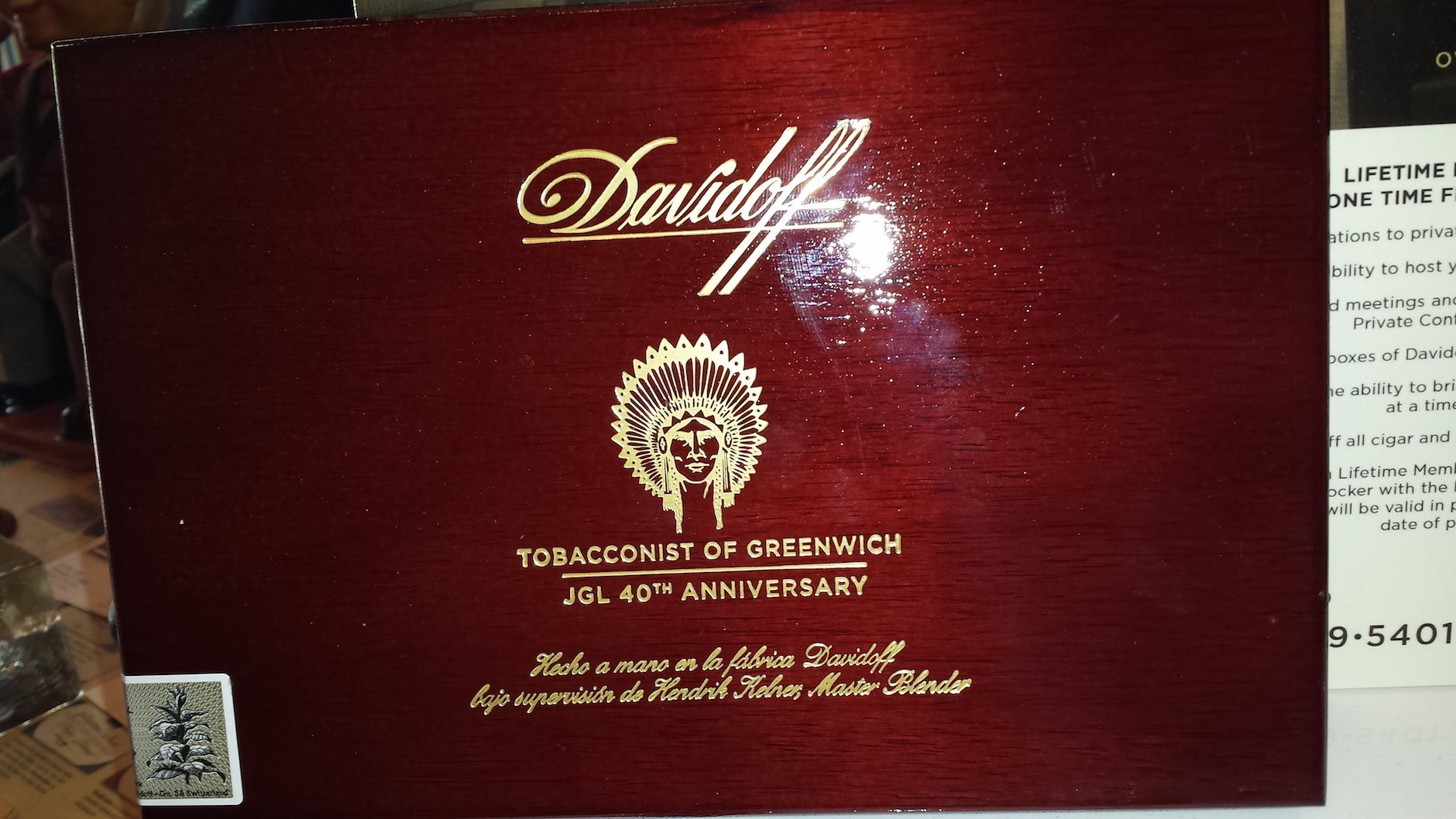 Tobacconist of Greenwich opted for 400 boxes, it’s also not disclosing the blend although according to owner Michael Cafagno, it tastes similar to the Davidoff Art Edition 2014.

“It was a very cool process,” Cafagno told halfwheel. “Nine different cigars to choose from, did a tasting test, three of each blend, took notes, narrowed it down to three, sent more of those three and we picked the final one.”

The cigar is actually named the Davidoff Tobacconist of Greenwich JGL 40 Years, named after the store’s original owner, James G. Lacerra who passed away in 2011. It is priced at $20 per cigar and went on sale in mid-September. While the program is new, Davidoff is no stranger to making cigars for anniversaries having made releases for stores around the world, including those it owns and those operated by others. There should be at least one more release, Davidoff’s Kris Miller told us at the IPCPR show that the Davidoff retail outlets in Las Vegas would be getting a cigar to celebrate their 15th anniversaries.

As of July, next year’s release was said to be a toro due out in the first quarter.

(All images via the respective retailers.)

(An earlier version of this story said the cigars were six inches long, they are in fact 5 1/4. We regret the error).