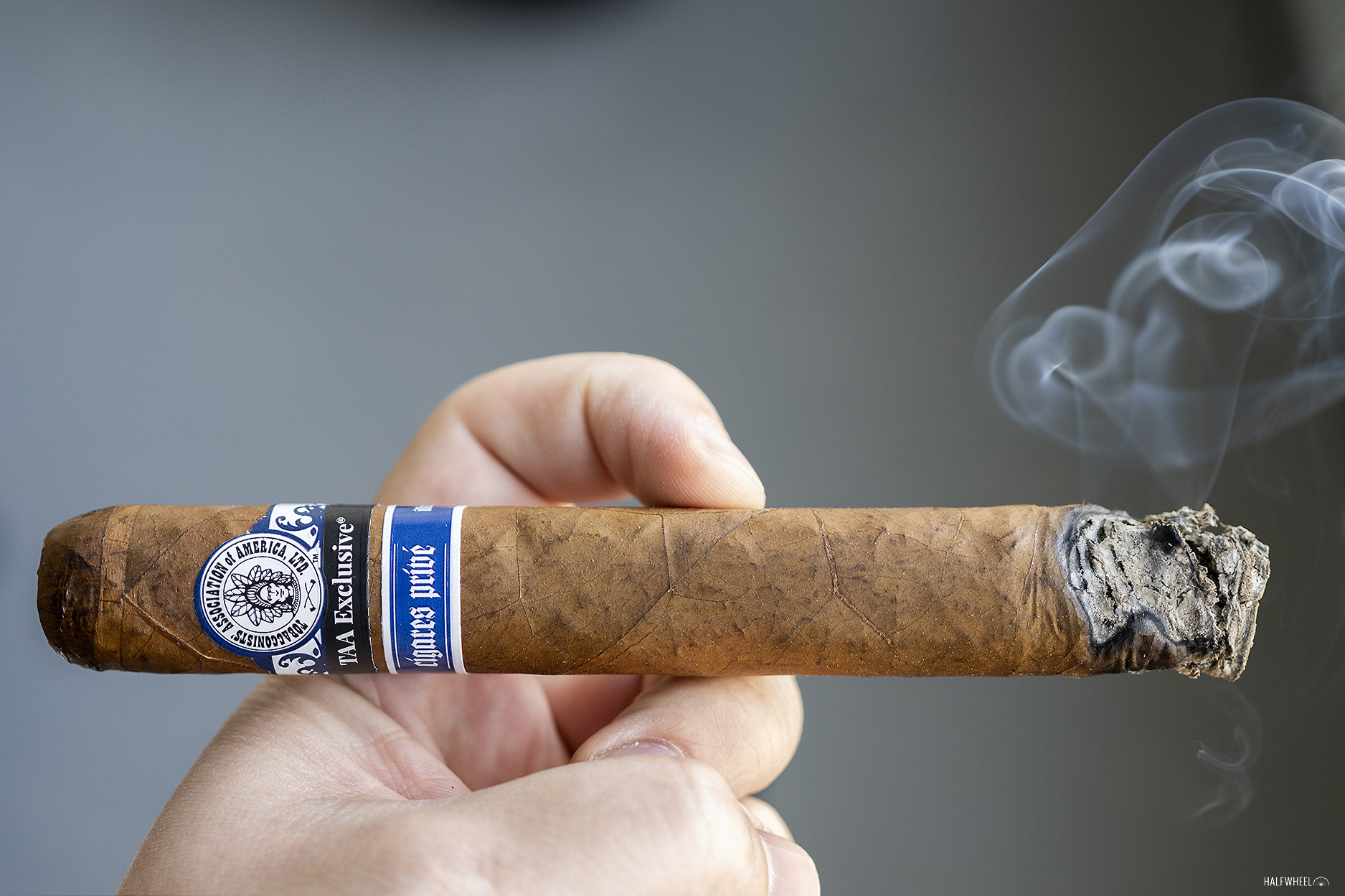 Because of the cigars from other manufacturers that have come before them, it’s always interesting to me whenever I see that a company is releasing its first exclusive release for the Tobacconists’ Association of America (TAA). On average, I don’t think the TAA cigars are any better than the rest of the cigars you might find on a retailer’s shelf, but there have been a few standouts that I still remember to this day. Furthermore, there’s some interesting business considerations that go into agreeing to produce a TAA Exclusive such as: whether it might upset a company’s sales representatives who may not get compensated for TAA-related sales at some companies, whether the manufacturer is content to give the TAA a minimum 50 cent donation for each cigar sold, and the question of how a TAA release might fit into the company’s overall approach.

This year, Illusione released its first TAA exclusive. The Illusione TAA 2021 is a 6 3/4 x 52 toro that—like many other Illusiones—is made entirely of Nicaraguan tobaccos at AGANORSA’s Tabacos Valle de Jalapa S.A. (TABSA) factory in Estelí.

The cigar was announced in March at the TAA’s virtual meeting alongside a dozen other new TAA exclusive cigars for 2021: 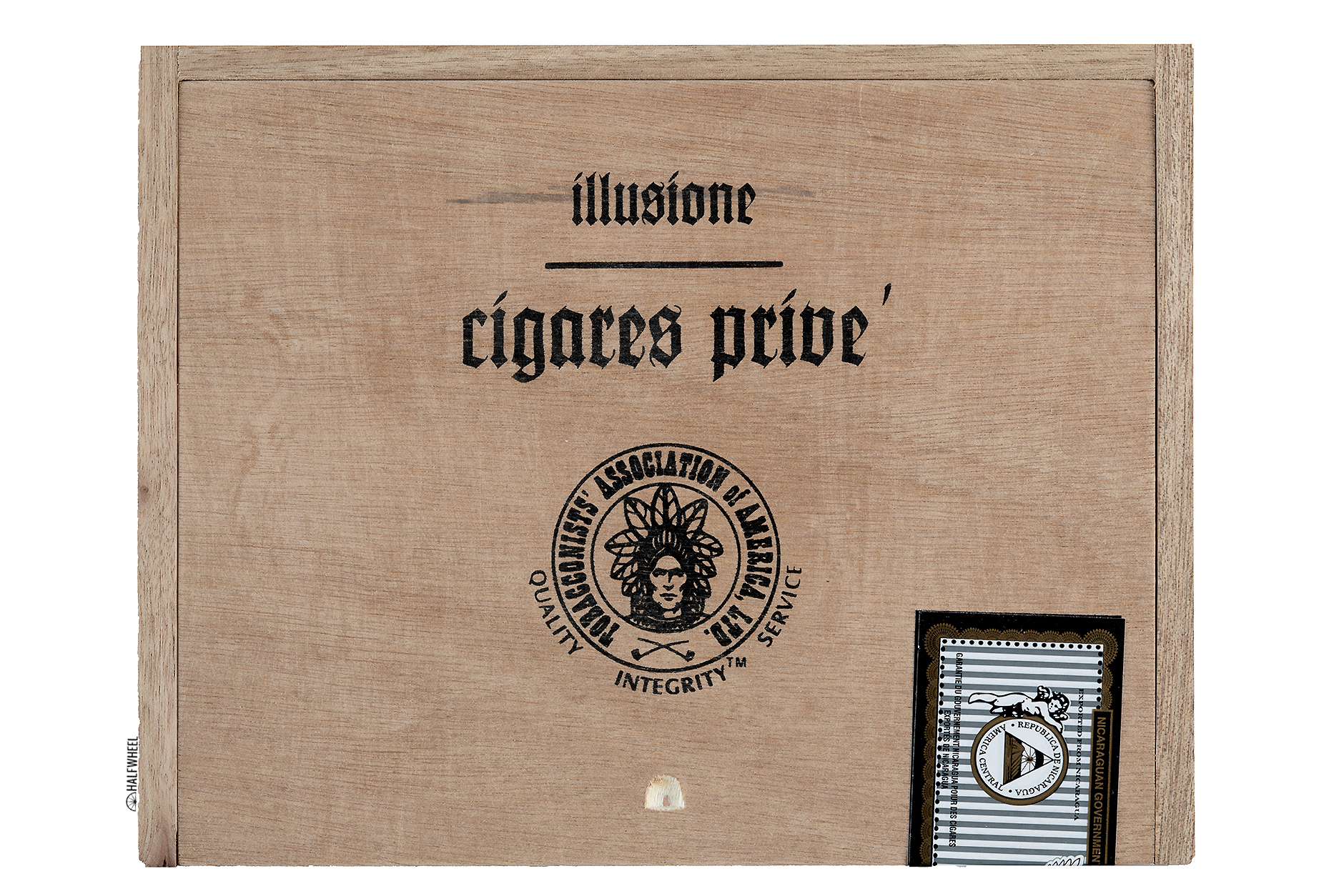 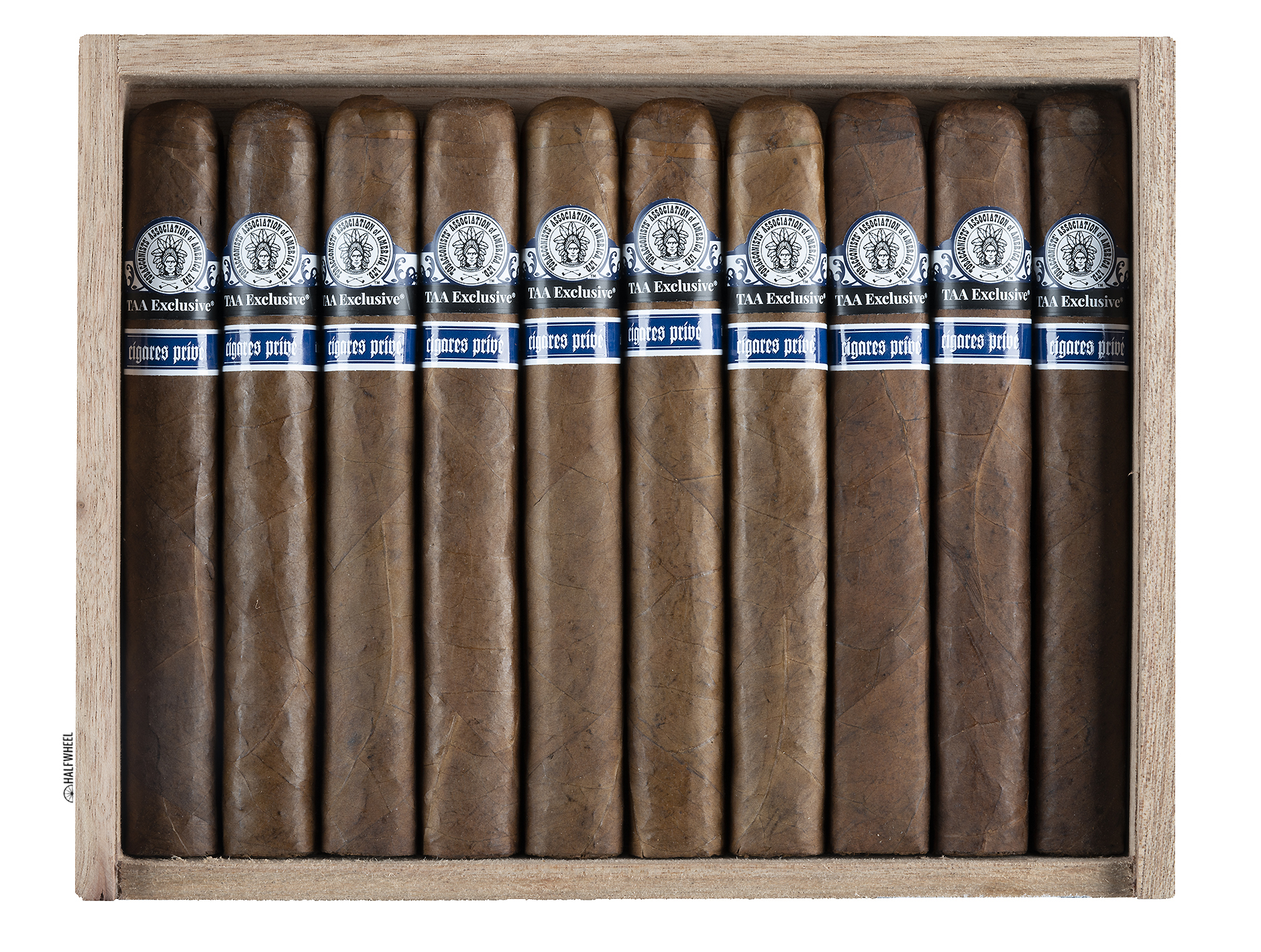 “I’ve been working on and off with a particular tobacco for a couple of years now that Eduardo (Fernández Pujals of AGANORSA) grows off and on,” said Dion Giolito, Illusione’s founder, to halfwheel in March. “I made some things personally for myself to smoke when I’m at the factory using this viso. I’m very comfortable with it now, and know how to utilize it within the context of a blend. It’s full-bodied, rich and goes deep, it has all the characteristics of an Illusione cigar when blended correctly.”

This year, the TAA held a virtual meeting during March and then an in-person event in late October. Upon opening the box of Illusione TAA 2021 we purchased, it is very apparent that something was not correct. Beyond the fact that the bands aren’t aligned in a normal manner and the wrappers aren’t the most uniform color-wise, it is immediately apparent that the cigars aren’t the same shape. Some of the cigars are definitively box-pressed, other cigars are pretty much round, and of course, some cigars are somewhere in the middle. The shapes of these cigars aren’t like J.C. Newman’s Yagua, but they are also unlike any other box of Illusiones I’ve seen. Moving on to the other parts of the cigars’ appearance, the main band itself is neither my favorite nor the most well-done band I’ve ever seen. The same could be said about the wrapper’s appearance, which is spotted and somewhat inconsistent between the cigars in the box. Aroma-wise, it smells like a mixture of burnt bread, barnyard and campfire flavors over something that reminds me of onion powder. The foot is closer to full and has aromas of roasted nuts, spiced rum, sweet chocolate and graham crackers. For all of the interesting combinations I was able to smell, the cold draw is almost entirely oatmeal flavors. On one cigar I get a citrus sweetness that reminds me of Sprite, but it’s largely just oats.

The first bit of smoke that hits my palate is very reminiscent of the pre-light process described above. There’s toastiness, oats, leather, a lime sweetness, white pepper, black pepper and some earthiness. Depending on the cigar, it varies between medium-plus to medium-full. I am not surprised at all to find the Illusione TAA 2021 shifting more and more towards the oatmeal flavor, though I am a bit surprised that the oats get to be as dominant as they do. It’s not 50 percent oat flavors and 50 percent everything else, it’s probably closer to 80 percent oat flavors and 20 percent everything else. Those other flavors include mustard powder, some spiciness, a little bit of creaminess and, on one cigar, some sunflower seeds. The finish adds a pretzel dough flavor to the mixture, which mixes with the oats in an interesting manner. There’s also some saltiness but it’s hitting a very different part of the palate compared to the pretzel flavors. While there’s lots of mouth salivation, the profile is a bit too homogenous for my liking. Fortunately, whenever I need something to change the profile, a retrohale provides a decent dose of creaminess and white pepper to change up what I’m tasting. Additionally, there’s some of the oatmeal flavors, along with a raspberry, though those are minor compared to the creaminess and white pepper. Retrohales finish with a velvety texture and flavors of creaminess, pita bread and some burnt flavors. Intensity-wise, flavor is medium-full, body is medium-full and strength is medium. One sample has a loose draw—it also has a tiny bit of tobacco missing from the center of the foot—and all three cigars are requiring me to smoke quicker than I’d like. Each cigar requires at least one touch-up, usually to help with the smoke production, while on one cigar the burn line is in need of some serious help.

There are two major changes during the second third. First, I find the profile to be a lot livelier than before. Second, the oatmeal is no longer the dominant force that it wading the first third. It’s still there, but earthiness and grains are pretty close to the intensity level of the oats. There’s also an uptick in black pepper—which makes a major difference—along with some mustard, leather, sourness and a touch of barnyard flavors. The finish has earthiness, oats, black pepper, sourdough bread and some mineral flavors. Prior to this review, I had only smoked one cigar in the last week and I’m astonished how beat up my palate feels as midway through the first sample as it feels like I’ve smoked multiple cigars during the same day, something I did not do. Retrohales once again provide some very different flavors compared to the main flavors. There’s a lot of citrus—more grapefruit than anything else—along with some meatiness and barnyard. It’s a very odd mixture, but it works well, in part due to how much smoother it is than the mouth flavors. The finish has burnt popcorn, leather, sunflower seeds, a chemical-like flavor I can’t entirely place and some green pepper on my throat. Flavor is medium-full, body is medium-full and strength is medium-plus. While the draw issues on the one cigar have gone away, the burn issues persists on each cigar. It’s not a touch-up every inch, but I find myself smoking quicker and using the lighter to help prevent the cigar from going out. 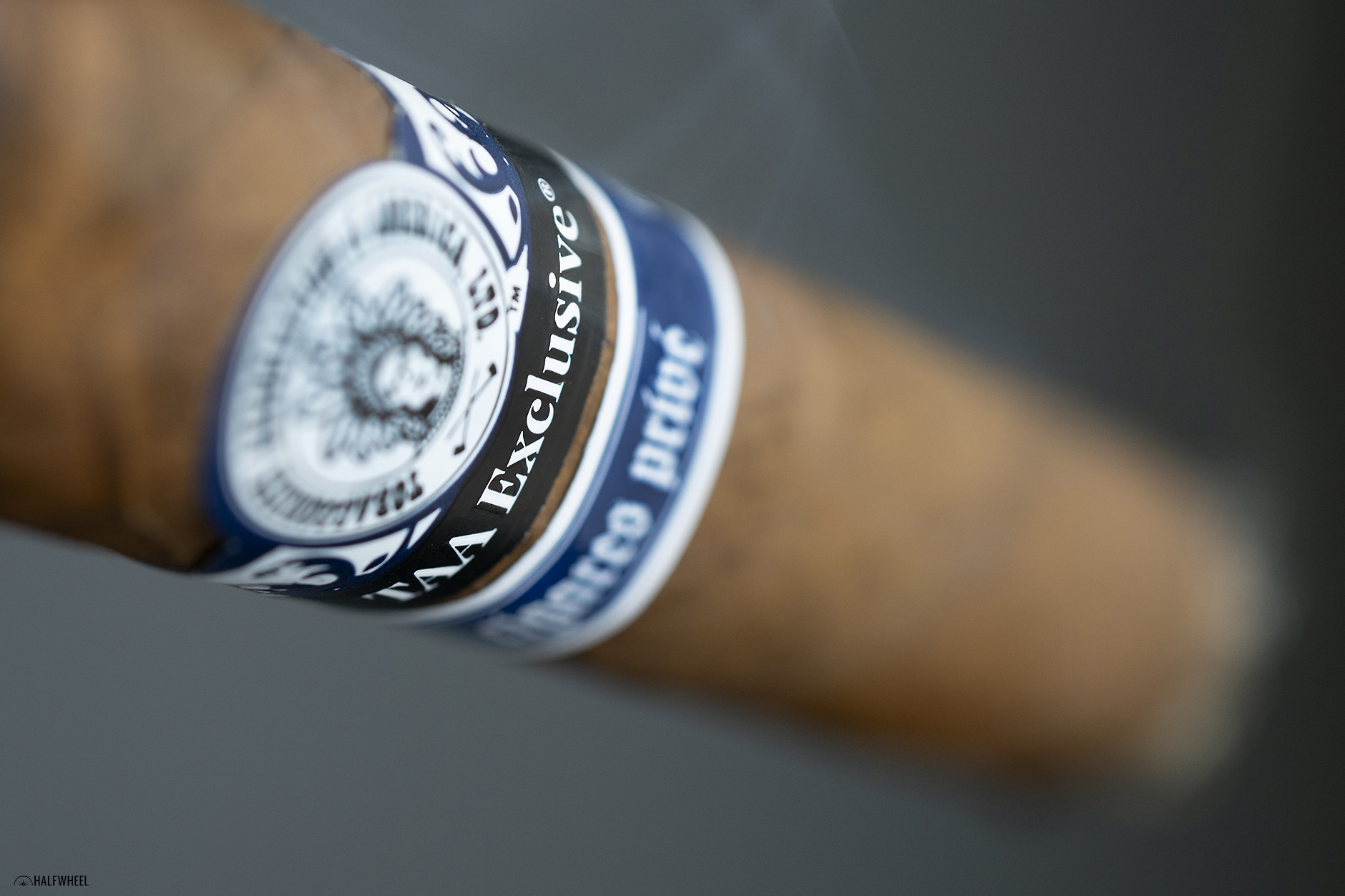 Somewhere during the last parts of the second third, the oatmeal flavor disappears and by the start of the final third, it somehow feels like a distant memory. While I would have preferred a much different profile, I’ll take what the cigar is giving me, which is now led by a mixture of nuttiness and some crackers. Behind it is a reduced amount of white pepper and some hints of liquid smoke, though the overall effect is a profile that is much sharper than before. That sharpness extends to the finish, which has more of the campfire flavors along with some bread, earthiness and remnants of the oat flavors from earlier. Retrohales see a toastiness take over as the leading flavor growing out the citrus and a subtle sweetness. The retrohale’s finish tastes like I just ate a carbohydrate-laden breakfast of oatmeal and multigrain bread, along with some generic pepper. It’s a similar story in the sense that it’s a lot of homogenous flavors that dry out my mouth. Flavor is medium-full, body is full and strength is medium-full. I continue needing to touch up the Illusione TAA 2021 during the final third, though the threats of the cigar going out seem reduced compared to the earlier parts of the cigar. 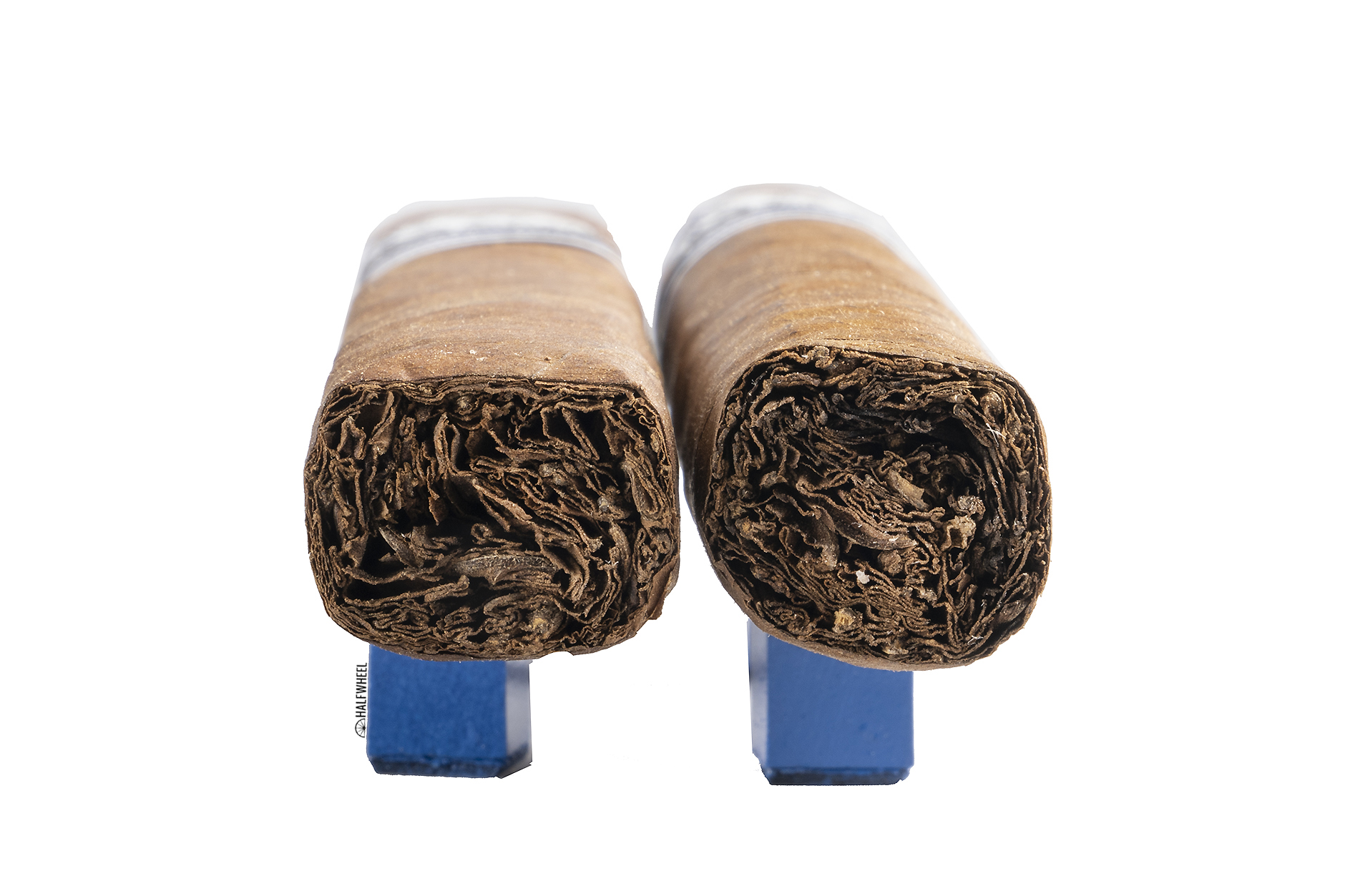 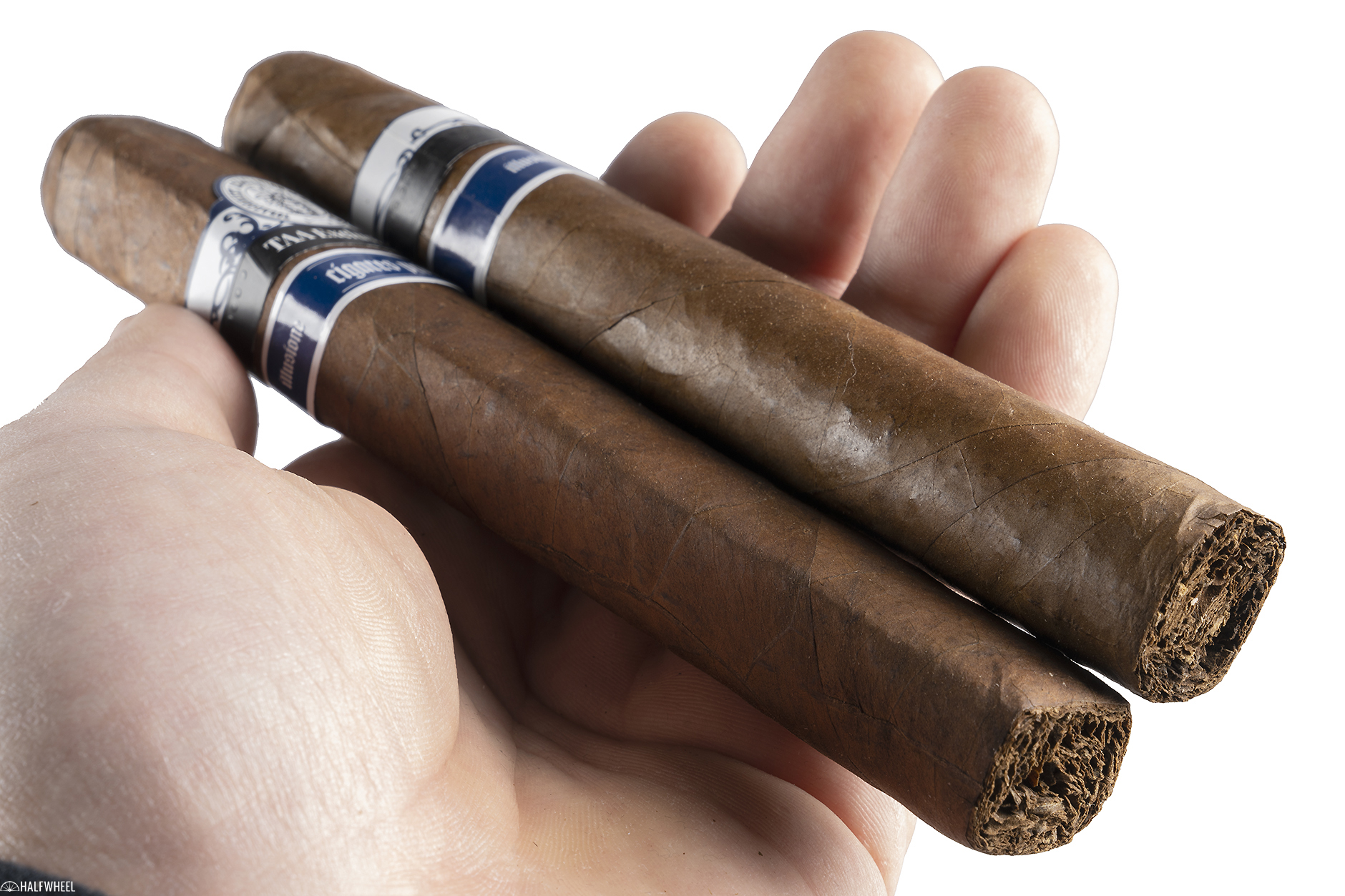 The Illusione TAA 2021 has more construction issues than I’d like in any cigar and as such, I’m not entirely sure what to make of the flavor profile. While it wasn’t my main focus on any individual puffs, I found each cigar to be slightly unbalanced. Rather than a profile where flavors worked with one another, it seemed like every flavor was trying to outdo one another in terms of its aggressiveness, albeit, not in terms of intensity. But like any cigar with consistent construction issues, I wonder what this would have tasted like without them. My question about what Illusione intended this cigar to be is only furthered by the inconsistent imperfections in regards to the cigars shapes. Regardless, Illusione makes a lot of excellent cigars, this box of Illusione TAA 2021 does not contain that type of cigar. Though, even a bad Illusione is still far from a bad cigar.