The Singularé line from Illusione should seemingly need little to no introduction by this point. Launched in 2010, it has been a near-annual release from Dion Giolito, save for 2017 when cigar was released, and the 2011 and 2012 versions which shipped alongside each other in July 2012.

When that first cigar, the Phantom, was launched, it was understood that the line would add a new cigar every year, though in a different size. Ten years later, that is almost exactly what has happened. 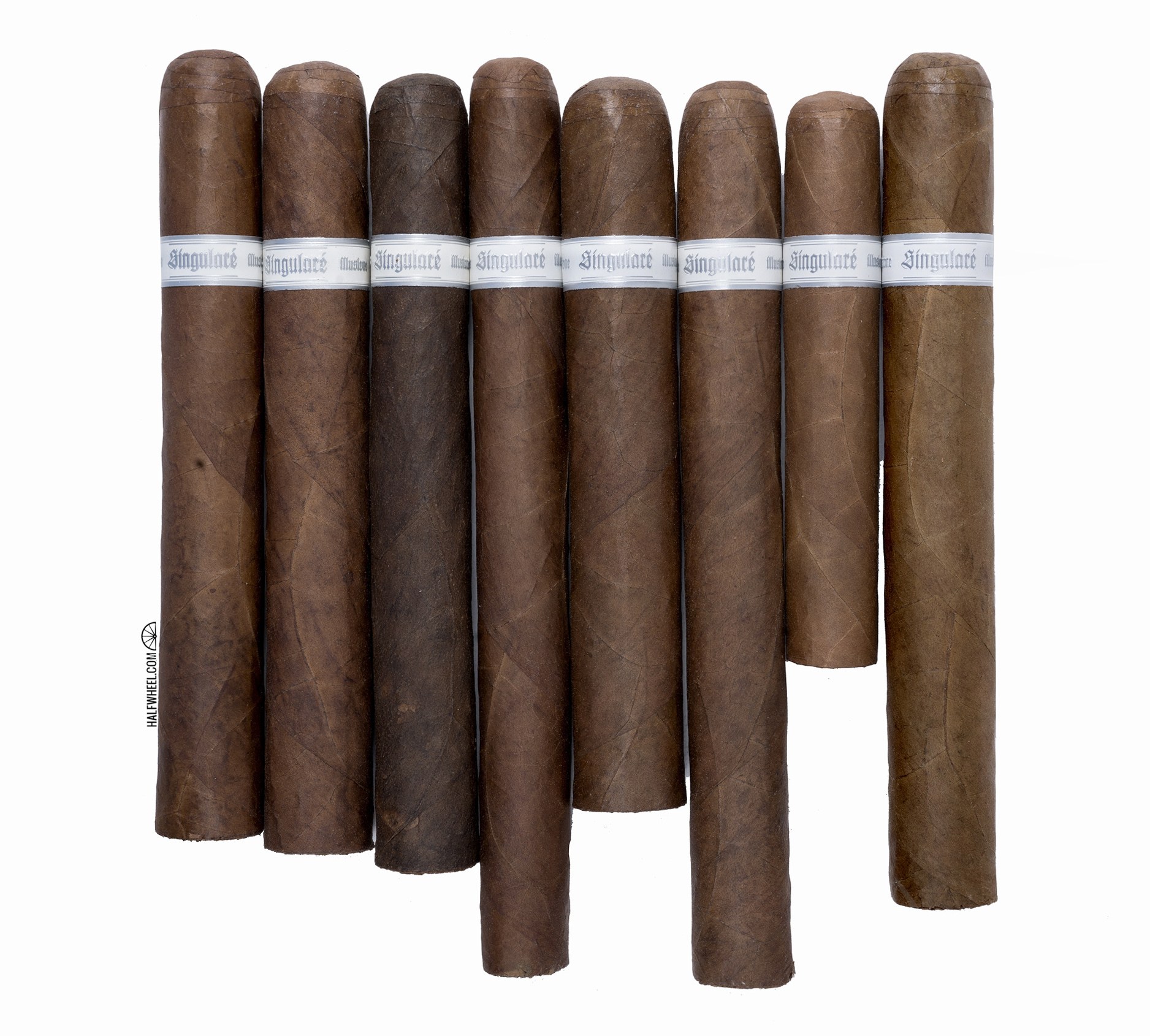 In the case of the Illusione Singularé 2018 Turin, it was one of the beefiest cigars that the company had released in the series, tying for second in terms of ring gauge and third by way of length. It is a Nicaraguan puro, a trait shared by all but 2012’s Vimana, which used a Mexican San Andrés wrapper and happened to coincide with the year that Giolito moved production of the line from Raíces Cubanas in Honduras to the Tabacos Valle de Jalapa S.A. (TABSA) factory in Nicaragua, which is owned by Eduardo Fernández, the principal in AGANORSA S.A., the company which supplies the tobacco for the release. 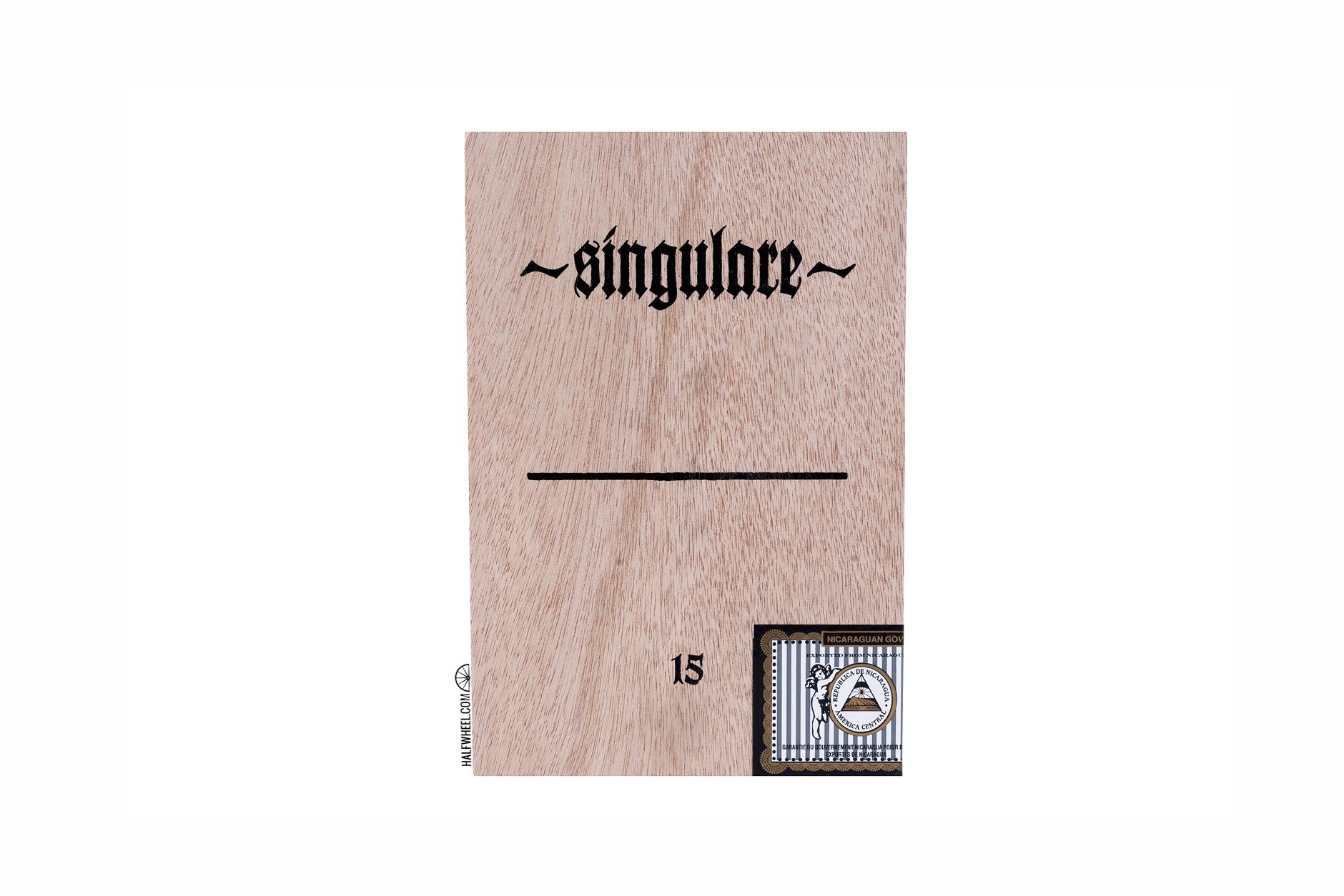 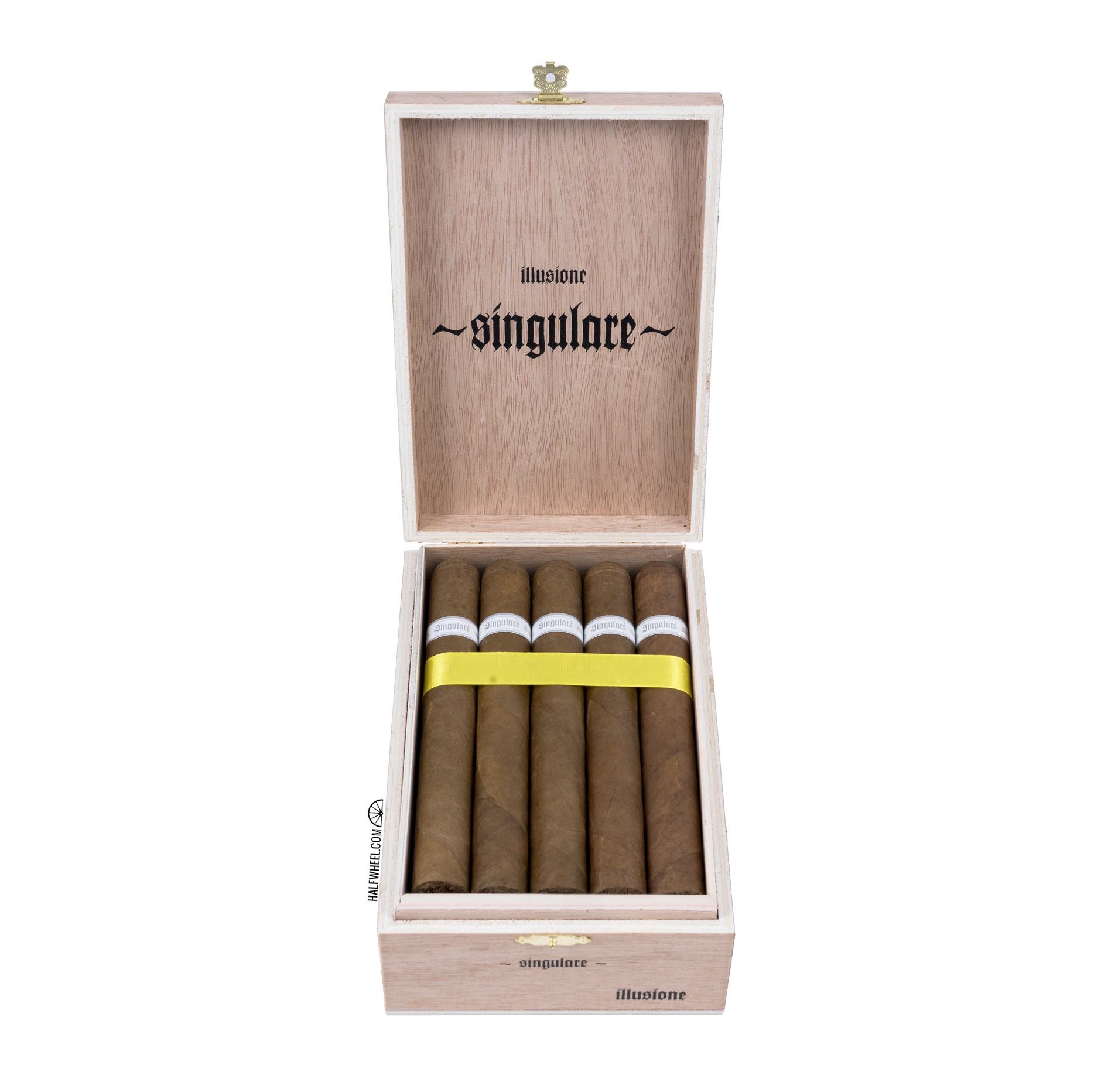 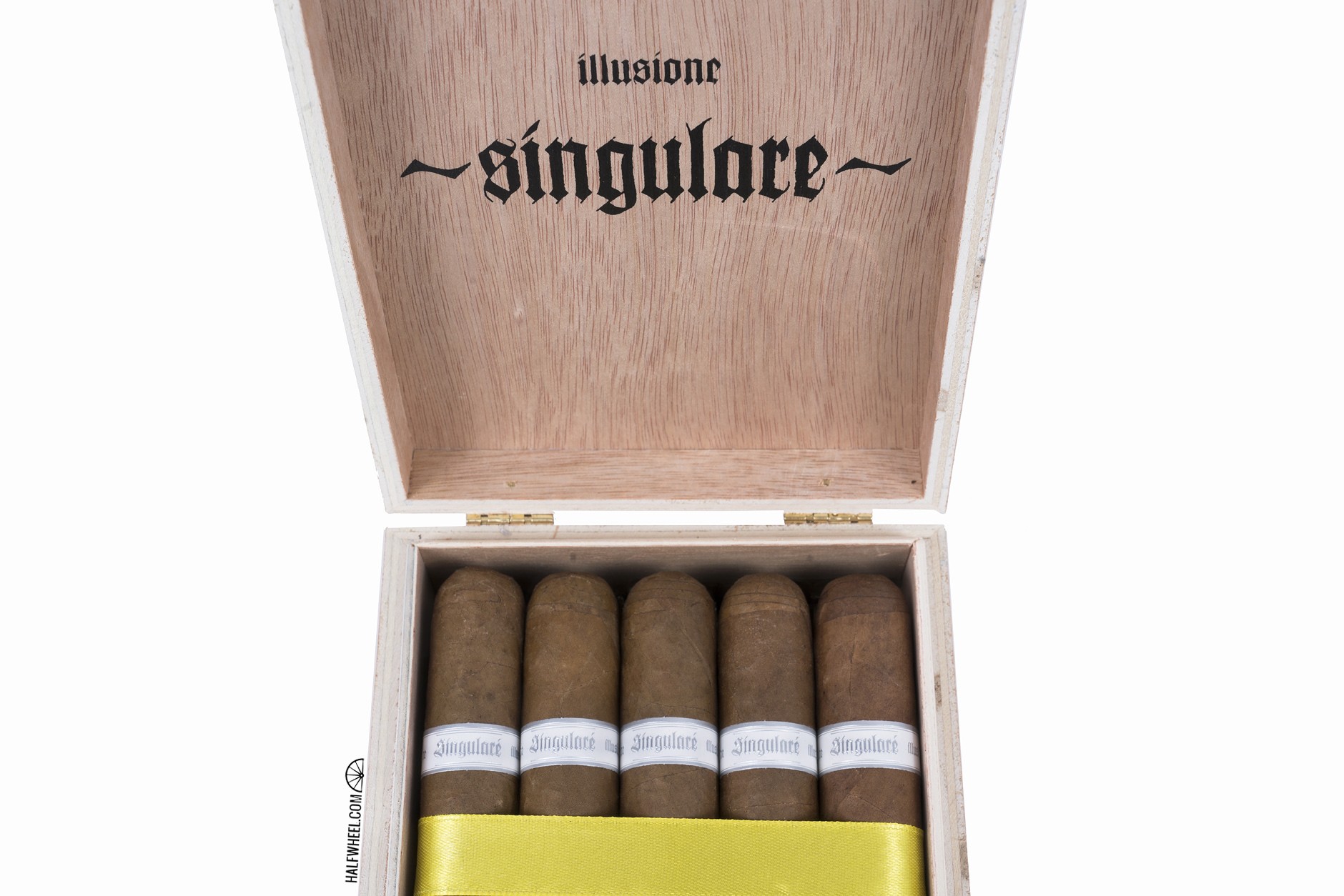 It was also to be the release with the smallest number of boxes produced, a number that has not been specified but would be no more than 900 boxes, as that is how many were created for 2013’s Rose Croix and 2015’s Miserere. Since 2016, Giolito has not disclosed the number of boxes he produced for the Singularé releases.

As for its name, it certainly conjures up thoughts of the Shroud of Turin, a piece of linen that was long believed to be the burial cloth of Jesus Christ. It may be best known for containing an image of what was assumed to be Jesus, though scientific testing and testimony by a 14th century bishop and confession by an artist of that era proved it to be a forgery. Still, it remains in the Cathedral of Turin in Italy and remains an item of devotion for many Christians as well as the basis for what many believe Jesus looked like.

The ninth and most recent installment, the Illusione Singularé 2019 Seven Horns, just began shipping in October. It is a 6 3/4 x 52 diadema, the first time the line has used a figurado vitola. Like this cigar and nearly every Singularé release, it too is a Nicaraguan puro that is made at the Tabacos Valle de Jalapa S.A. (TABSA) factory in Estelí, Nicaragua, with an unspecified number of 15-count boxes shipped, though the range was set to be between 500 and 700 boxes, depending on the availability of the tobaccos. That cigar is priced at $15, before taxes.

Here’s what I said about the Illusione Singularé 2018 Turin when I reviewed it in May 2018:

To say I was surprised by both the start and finish of the Illusione Singularé 2018 Turin would be an understatement; there’s a much bolder start than I generally expect from the company, while the final third was sharper and harsher than I’d like from any cigar. That leaves the second half of the opening third as well as the second third, which are both quite good and almost signature Illusione: a refined, medium bodied and flavored profile with underlying creaminess that invites the person smoking it to dive into its nuances. For as good as those puffs are, the finish leaves such a punch of strength that it’s seemingly all that occupies the mind once the cigar is put down. This is a cigar I could see evolving well with some time, and one I’m hopeful will preserve the best parts and smooth over the ones I found less than ideal; if and when that happens, this will easily rank among the top in the Singularé series. I have been staring at this cigar for some time now, thinking about it for a redux for the past few months every time I open up the humidor that contains that group of cigars. The cellophane has begun to show its age, so much so that I thought this might be the Illusione Singluaré Rose Croix, which I reviewed in 2013 and which has a similar vitola, though at 7 x 46 is longer and slenderer than this 6 1/4 x 52 toro, especially once the cigar is in the hand. Secondarily, the cigar has a few small, dark brown spots on it, which I immediately became concerned were beetle holes, though was relieved to find out were simply small flakes of loose tobacco that brushed off easily. There is a small bit of damage near the head that I’m both assuming happened during transit or storage and hoping won’t be problematic. The cigar itself has a graham cracker color, evenly and well tanned, though I can see a bit of green in spots and one watermark. Otherwise, it is an attractive capa with flat seams and a network of very small veins. It’s rolled firmly but still shows some give, with no obvious construction issues. The foot of the Illusione Singularé 2018 Turin is light and sweet, leading with bit of strawberry before pepper appears and gives the nostrils a solid tingle. The cold draw is a bit firm, and it feels like I get a few small flecks of tobacco to come out of the cigar as well. The flavor is thick and creamy, leading my mind to think of various kinds of yogurts, puddings and the like, though failing to find an exact match as there isn’t a solidly defining flavor. Like in the nose, pepper follows along shortly after to wake up the taste buds and palate.

The first puffs of the Illusione Singularé 2018 Turin show that nearly 18 months of rest hasn’t tamed the black pepper, as while it isn’t big, bold or brash it still manages to get right to work tingling the tongue. An early retrohale shows its vibrancy through the nose is about on par, though each experiences their own distinct expression, with the retrohale feels a bit more complex and balanced at first encounter.  It’s not long before the two become better matched—and more importantly—more complementary to each other. The palate gets a slightly more subdued version that has a subtle creaminess enveloping the pepper along with some chalk and minerals, while exhaling through the nose reveals a brighter white pepper that stands out from that same creaminess. The ash hangs on decently until the one-inch mark before releasing its grip via a light tap. Its departure doesn’t immediately affect the profile, though the cigar continues on a path of getting more vibrant with white pepper while beginning to swap out the creaminess for something drier. The first thing to come to mind is Wheat Thins, both for flavor and the changing texture, though there’s also a very subtle wood note to them as well. As the burn line approaches the midway point, the burn, draw and smoke production have all been near perfect, while the cigar is a vibrant medium-plus in terms of flavor intensity thanks to the pepper, and a medium-minus in terms of strength.

The second half continues to develop the wood flavor, and while I referred to it as matchstick wood in the initial review, here it tastes more developed and matured. Whether or not that is due to age or just the uniqueness of this individual cigar, the result is a good one. Not long into the second half, the cigar does a switch-up with the pepper, swapping almost all the white pepper with a hearty black pepper, something I discover via a retrohale and which pushes the profile into medium-full territory for me but could easily land at full for others. It is still well balanced and easily at its fullest level of flavor. Right as the final third begins, the Turin’s profile takes another turn, this time not for the better. The overall flavor sharpens quite noticeably, and whereas the pepper had previously been very agreeable it now serves to agitate the senses. The smoke seems more textured as well, having traded its smoothness for pointedness, and I now get some heavier notes that suggest black coffee and coffee grounds. The cigar also begins to struggle a bit more with combustion, requiring slightly more frequent puffs to stay burning, something not found earlier. Thankfully, the detour that the flavor took was fairly brief and the cigar shifts back to a smoother profile that has picked up some nuttiness, with roasted cashews standing out on a few puffs. The pepper also dies down quite a bit, and the cigar is able to close after nearly two and a half hours on a higher note than it appeared to be headed for just a few puffs earlier.

When I wrote about the Illusione Singularé 2018 Turin, I noted that I was hopeful that some age would smooth over the parts of the cigar that I thought weren't on par with its better ones, and I'm pleased to report that for the most part, 18 months seems to have done just that. The cigar is still bright with pepper and as noted above, can show some strength at times, but for the most part the rest has brought about a much more complex and enjoyable cigar. Other than a couple of puffs in the final third the Singularé 2018 Turin is very enjoyable and offers a profile befitting of a limited edition release from Illusione. While one of the challenges of a redux review is attempting to use a single cigar to evaluate how a line has aged after a period of time, in this particular case it seems to suggest that this cigar has evolved into the cigar I was hoping it would be and would suggest to begin lighting them up if there are any sitting in your humidor.