Late last month, Fox Cigar Bar surprised everyone when the Gilbert, Az. store quietly announced it had landed an Illusione exclusive, Sin Cinta. While the store has a track record of landing exclusives, Illusione has a reputation for not doing them, with a notable exception being the Illusione Burn, which was made for Burn by Rocky Patel.

A limited edition Illusione is heading to Fox Cigar Bar. On Monday, the Gilbert, Az.-based store will begin selling the Illusione Sin Cinta. Sin cinta, which translates into tapeless or no band, is a predictably unbanded 6 x 52 toro limited to 50 cabinets of 50 cigars.
Sin Cinta is a Nicaraguan puro using a corojo wrapper from Jalapa and fillers from both Estelí and Jalapa. It also uses double binders: a corojo ’98 from Jalapa and criollo ’98 from Estelí. The cigars were rolled in November at TABSA, the same factory response for Rothchildes and the recent batches of Singularé.
Pricing is set at $8.99 per cigar or $400.00 per box. The cigar will be sold locally beginning on Jan. 27 and will not be available for phone orders until Feb. 3, although there is a wait list.

The cigars are shipped in 50-count cabinets, which includes a Rothchildes-style back for the lid to be displayed. 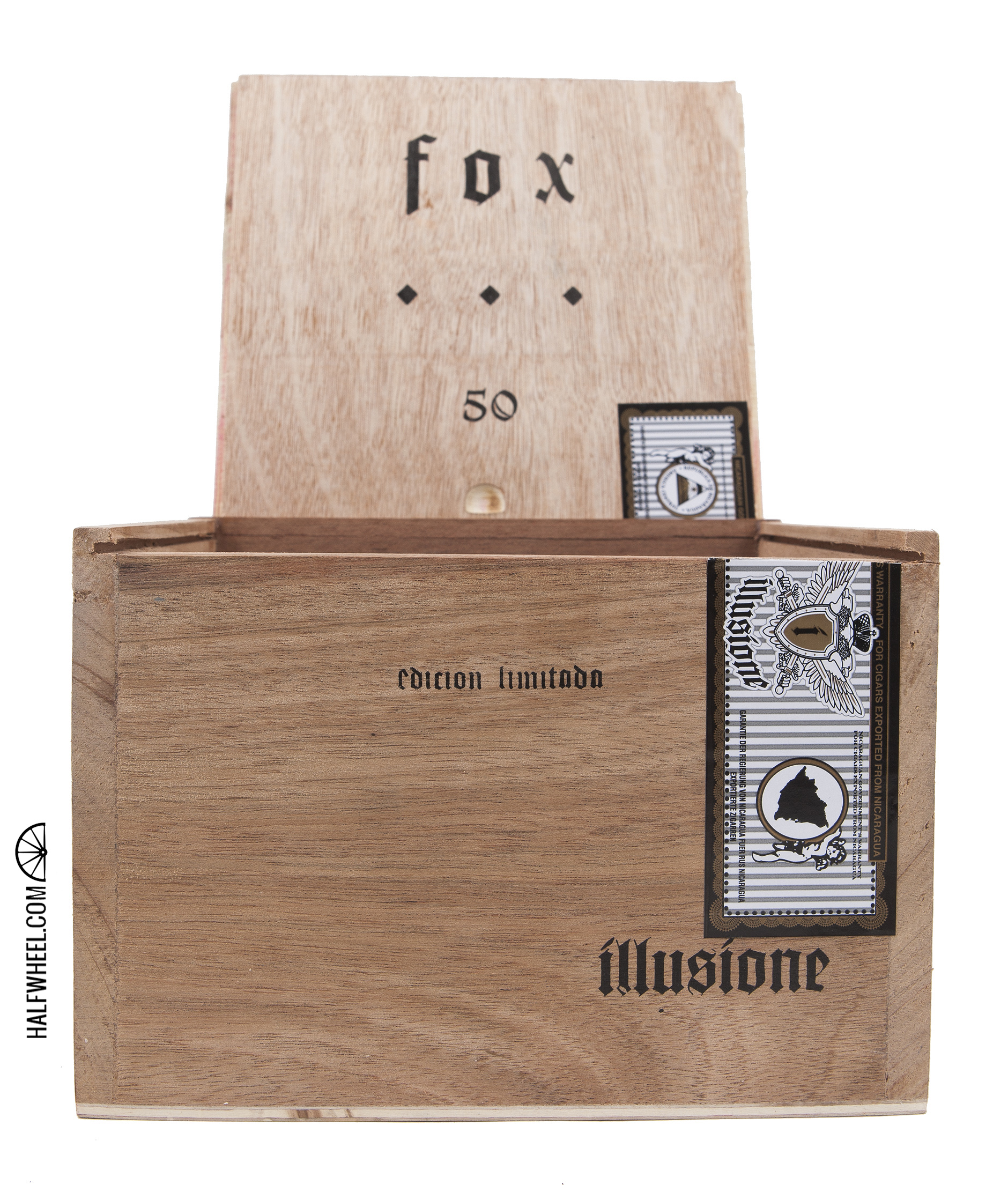 One of the reasons for not putting bands on cigars is that it makes you think about the cigar more. That’s the definitely the case with Sin Cinta. It’s not the prettiest cigar I’ve smoked this month, but it is well-rolled and has decent oils. There’s very little aroma to the cigars, something probably not helped by the fact they don’t have cellophane and my cigars were shipped in only a five-pack. From the foot, there’s some sweet woodiness, but not much else. The Illusione provides a sweet peppermint note on the cold draw, it’s smooth with some fruitiness. Of the four cigars I smoked, the first had much more of a woody cold draw, the following three were the peppermint and sweet fruit notes. All were slightly on the tight side with medium plus flavor.

It’s not the start I was expecting. A woody note that ranges from cedar to saw dust with coffee grinds on the finish. There’s quite a bit of sweetness on the Illusione and an ideal amount of spice and pepper. It’s medium: no blast of strength and flavors that are definitely contained. As the Sin Cinta progresses a fresh nutmeg note develops alongside the cedar as a saltiness comes and go. The fruitiness has taken a firm place in the nose and a bit of creaminess develops as the sweetness recedes. Draw remains a bit tight, smoke production is copious and the strength is medium. The second third of the Sin Cinta provides a profile that is more Connecticut-like than anything else. Gone is the saltiness, but an intense nuttiness takes over alongside the nutmeg with an even stronger creaminess. The fruitiness has turned more citrus and now providing a refreshing characteristic to the cigar. I am able to set my own pace with Sin Cinta, finding that a bit quicker than a puff per minute provides an interesting contrast as the cigar is pushed to its limit in terms of heat. A burnt coffee bean note emerges alongside some saltiness for the final third. Truth be told, all four cigars provided a different starting point and profile in the final third. Consistent was the saltiness, although three cigars showed the coffee note. Regardless, this was not the place where the Illusione shines. The lack of fruitiness on the nose took a bit out of the cigar’s ability to be dynamic and the smoothness just was not there. An enjoyable toastiness emerges at the two-inch mark on all four cigars, but it’s a shell of itself. At around an inch and a half the smoke production continues to slow down and I try to get as far into as I can. I do not believe these cigars are going to get much better after a few years of aging, but that’s okay. This might be my least favorite cigar Giolito has released in the past year, but it’s still quite good. There’s a richness that most Illusiones have that is not present here, but there’s enough of a contrast that I would definitely smoke more. Is this a Rothchildes, Epernay or Rose Croix? No. Price aside, still prefer Rex over Sin Cinta, although the former definitely has some consistency issues. Flavor-wise, Sin Cinta seems fragile, slightly muted and definitely a bit more hollow than I’ve come to expect from Dion Giolito, but even with those flaws, it’s still a very good cigar with plenty of flavors.