In the rush to get new cigars to market prior to U.S. Food & Drug Administration’s (FDA) Aug. 8, 2016 deadline for when they would need pre-approval, Dion Giolito added a number of new offerings to his portfolio, including the third extension to the popular *R* Rothchildes line.

This newest cigar was an Ecuadorian Connecticut version of the Rothchildes, with Giolito swapping out the original’s Mexican San Andrés wrapper for this project. It would stay as a single-vitola release, a 4 1/2 x 50 robusto like the original version that came out in 2013, with a very appealing $5.50 MSRP and packed into 50-count boxes.

Not only was this a new release, it was Giolito’s first venture into Connecticut wrappers, a variety to which he has readily admitted to not being a fan. He ended up not only using it on the Rothchildes, but on its bigger sibling, the Illusione Gigantes.

Here’s what I said about the Illusione Rothchildes CT when I reviewed it in February 2017:

I’m a bit on the fence of the like/love debate when it comes to the Illusione Rothchildes CT; there are certainly parts where it is a tremendous cigar, and there are a few that are head-scratchers, and the start of the final third is the most challenging due to the quick change that the cigar takes because of the heat. All that said, it’s still quite a flavorful cigar and certainly stronger than the CT label might suggest and one that deserves at least one or two chances to see how it sits on your palate. I have a pretty good feeling I’ll be steadily smoking these in the coming months. 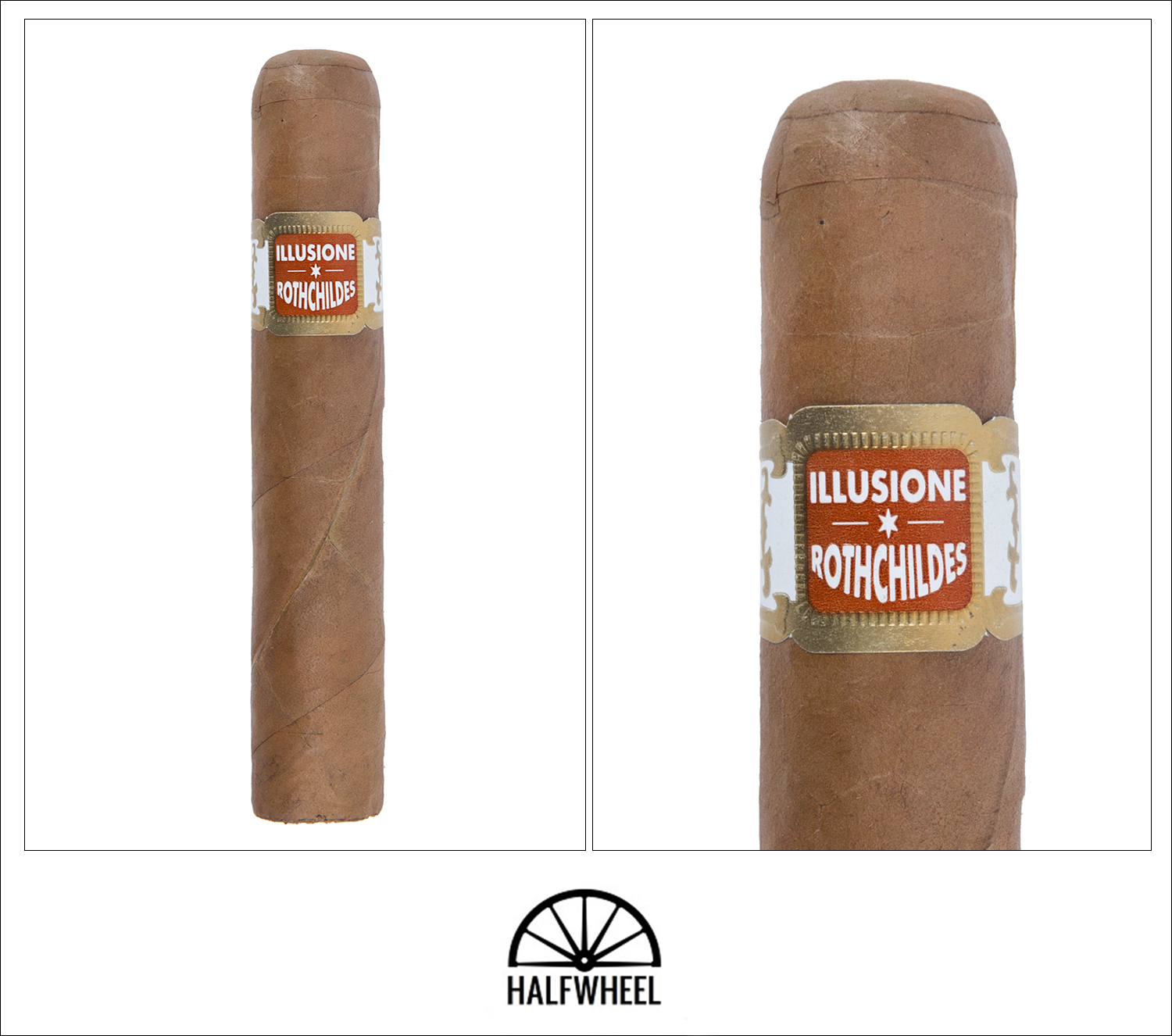 The Illusione Rothchildes CT is still a simple yet beautiful cigar, with a lightly tanned, graham cracker hued wrapper and complementing band with its gold and burnt orange tones. The sample plucked from my humidor for this redux is much firmer than I recall, showing absolutely zero give when gently squeezed. The foot is light with notes of crackers and dinner rolls, a touch of butteriness and just a sprinkling of pepper. The cold draw is ideal for air flow, offering a bit of graham cracker and corn flakes, slightly sweet but far from obnoxious and a bit less complex than my notes from the original samples indicate.

There is no shortage of smoke and a surprising amount of pepper offered by the Illusione Rothchildes CT when I toast the foot and take the first puffs; before long the pepper shows a mix of white and black with the balance shifting towards the former and my nostrils tingling with each retrohale. My fears that the cigar may have been a bit under humidified are quickly realized as the cigar develops a sizable crack, though so far it hasn’t affected performance, which is very good with an easy draw and even burn line. A bit of creaminess begins to emerge to help soften the pepper and add a touch of new sweetness and complexity. While the crack doesn’t get better, the flavor continues to evolve nicely, holding steady on the specific components but allowing them to blossom and deepen, with a texture that has me thinking of a syrup or sweet spirit beginning to develop. The first clump of ash finally lets go near the midway point as the cigar continues to burn well and holds its profile. 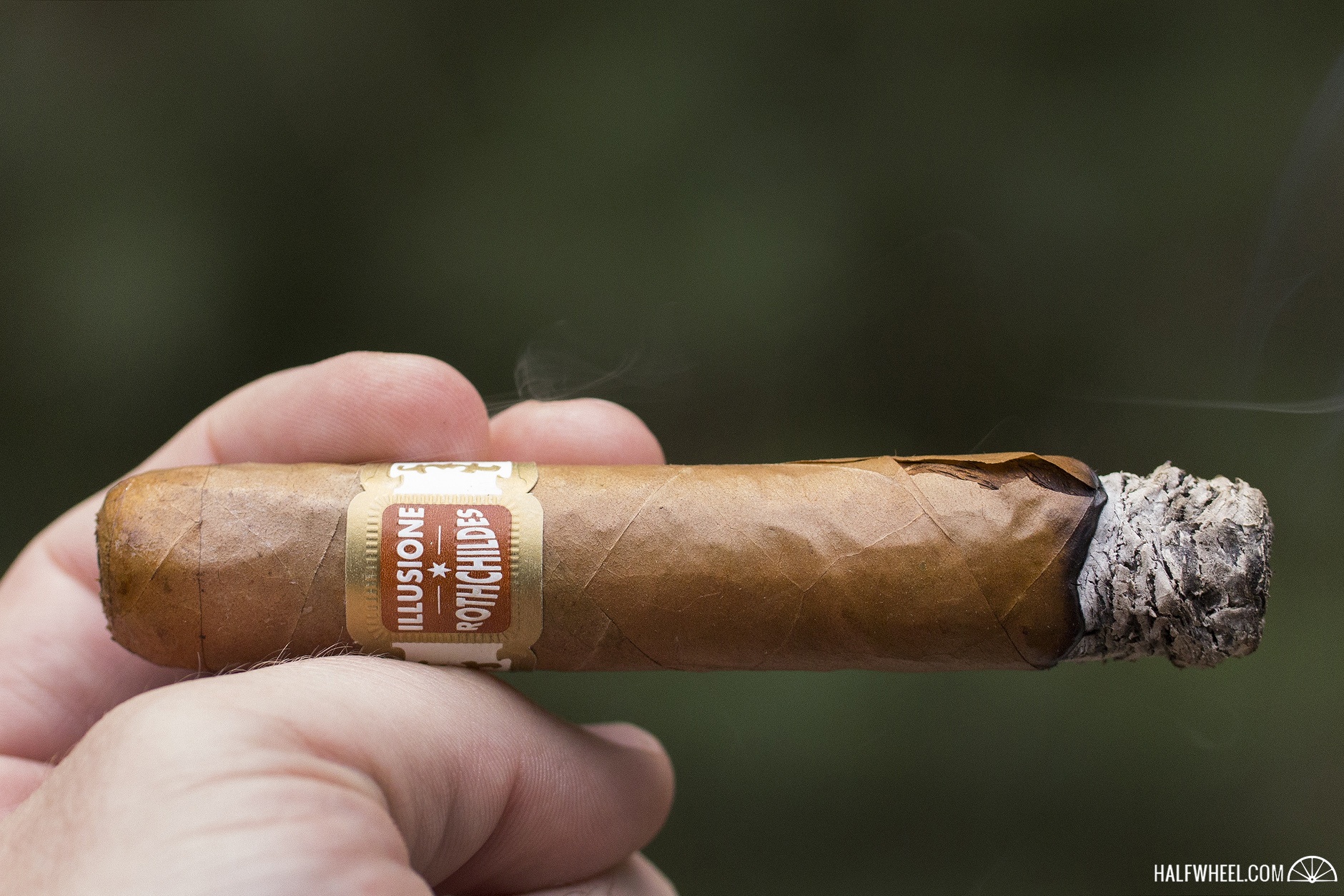 I find myself surprised by how peppery the Illusione Rothchildes CT is; I had recommended this to an uncle of mine as he tends to prefer milder cigars, and had I had this profile in mind I might have steered him to something else, though thankfully he seems to enjoy it. There’s a bit more of a toasty edge to the profile, playing off the pepper but developing on its own as well. While I wouldn’t say the flavor has flattened a bit, a good amount of the sweetness is gone, replaced by a dry, lumberyard core that flirts with cedar but never quite embraces it, leaning more towards the notes of white toast that began to appear just a it earlier. Thankfully the wrapper has held together and the cigar continues to burn beautifully, with plenty of smoke, an easy draw, and an even enough burn line that keeps the lighter on the table. The cigar coasts into its final puffs with the same finesse and smoothness that it has shown since the start, only picking up a touch of heat and smokiness and leaving me quite satisfied for nearly 90 minutes of smoking time.

In my original review, I noted being on the fence of the like/love debate when it came to the Illusione Rothchildes CT. After this redux and a handful of samples of it since, I have to say I lean more and more to the latter, more for what it is—a reliable, flavorful, and enjoyable cigar that is priced extremely well—than for any flavor descriptors I could attach to it. This is the kind of cigar you want in your humidor or at every cigar shop, as it's almost a no-brainer cigar for when it comes to something that nearly everyone can enjoy, doesn't take all day to get through, and can be savored from start to finish without imparting a nicotine hangover. I know people who have picked up handfuls or boxes after their first experience with it, and it's easy to see why.