Illusione has released relatively few limited editions over the years, so it is always an event when the company announces a new addition to that part of its portfolio.

One such time was back in 2008, when the company commented the 15th anniversary of the European Cigar Cult Journal magazine—the name of which has since been changed to Cigar Journal—with a release known as the ~eccj~ and blend that eventually went on to become the Illusione Epernay. That original release consisted of a 5 5/8 x 46 corona gorda priced at $8 each with only 4,500 cigars rolled in total.

Fast forward five years to 2014, when Illusione showed off another limited edition to celebrate the magazine’s 20th anniversary at the 2014 IPCPR Convention & Trade Show. Appropriately dubbed the ~eccj~ 20th, that release was a 6 1/4 x 48 corona extra incorporating a Nicaraguan Corojo 99 wrapper covering a Nicaraguan binder and internal blend composed of Nicaraguan criollo 98 and corojo 99 tobaccos. However, the size and blend were not the only differences between the two releases, as the newest version retailed for $13 each and featured a total of 30,000 cigars rolled and packaged in boxes of 15.

It turned out that Illusione was not quite done with the that latest blend, as the company announced in 2016 that it would be available as a regular production release in three different sizes: a 5 1/2 x 50 Robusto, a 5 5/8 x 46 Corona Gorda and a 6 1/2 x 48 Churchill, which was only 1/4 inch shorter than the 2014 incarnation.

Here is what I said about the Illusione ~eccj~ 20th in my original review back in February 2015:

I was not expecting the same cigar ~eccj~ 20th to be the same cigar as the ~eccj~—they are different blends, after all—but after smoking four of them for this review, I am a bit surprised at how close to the overall feel of the profile of the original the new one exhibits. Having said that, there are some significant differences between the two: the new version has significantly more spice on both the retrohale and the palate than the original, and also features more floral notes than 2008 version when fresh. Construction was excellent all around and smoke production was well above average with a strength that was noticeable, but played well the rest of the profile. A superbly blended, excellently balanced flavor bomb of a cigar, and I have no doubt they will age extremely well. 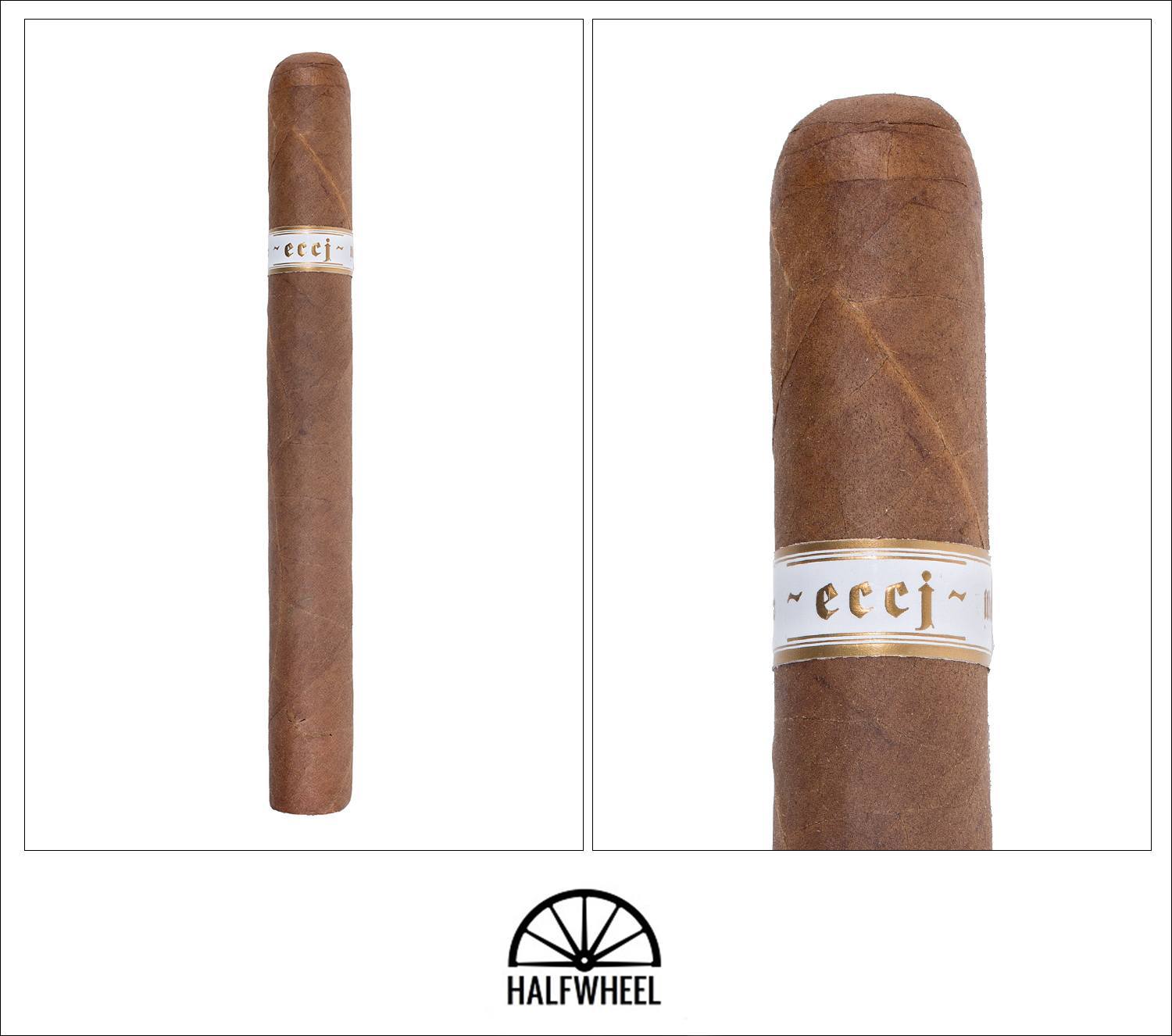 This ~eccj~ 20th came from the same box of original releases as the samples I smoked for the first review, so it is no real surprise that it looks quite similar to what I remember: a golden brown wrapper that is smooth to the touch while also being devoid of almost any trace of oil whatsoever. The cigar is quite firm when squeezed—just short of rock hard, in fact—and I easily detect a small soft spot located right under the band after an inspection. The aroma from the wrapper is a combination of dark chocolate, cedar, leather, hay, peanuts and earth, while the cold draw brings distinct flavors of cinnamon, slight citrus, sweet milk chocolate, almonds and cedar along with some slight white pepper and a touch of spice on my lips.

Just after toasting the foot of the Illusione ~eccj~ 20th, I am inundated with flavors, including a dominant combination of creamy cedar and freshly roasted espresso beans on the palate. Other notes of cinnamon, hay, anise, nutmeg, earth, lemongrass and generic nuts flit in and out, while a bit of white pepper on the retrohale and some spice on my lips both make themselves known at various points. There is an interesting floral note on the retrohale as well that stays in the profile throughout the entire smoke, although it is most prevalent in the first two thirds. While the dominant flavors remain the same, the final third does drop off a bit from the amazing profile that preceded it, losing most of the floral note as well as the white pepper on the retrohale. In addition, the milk chocolate sweetness begins to morph into more of a rich cocoa nibs note, which adds some bitterness into the mix, albeit not enough to negatively affect the other flavors that are present. 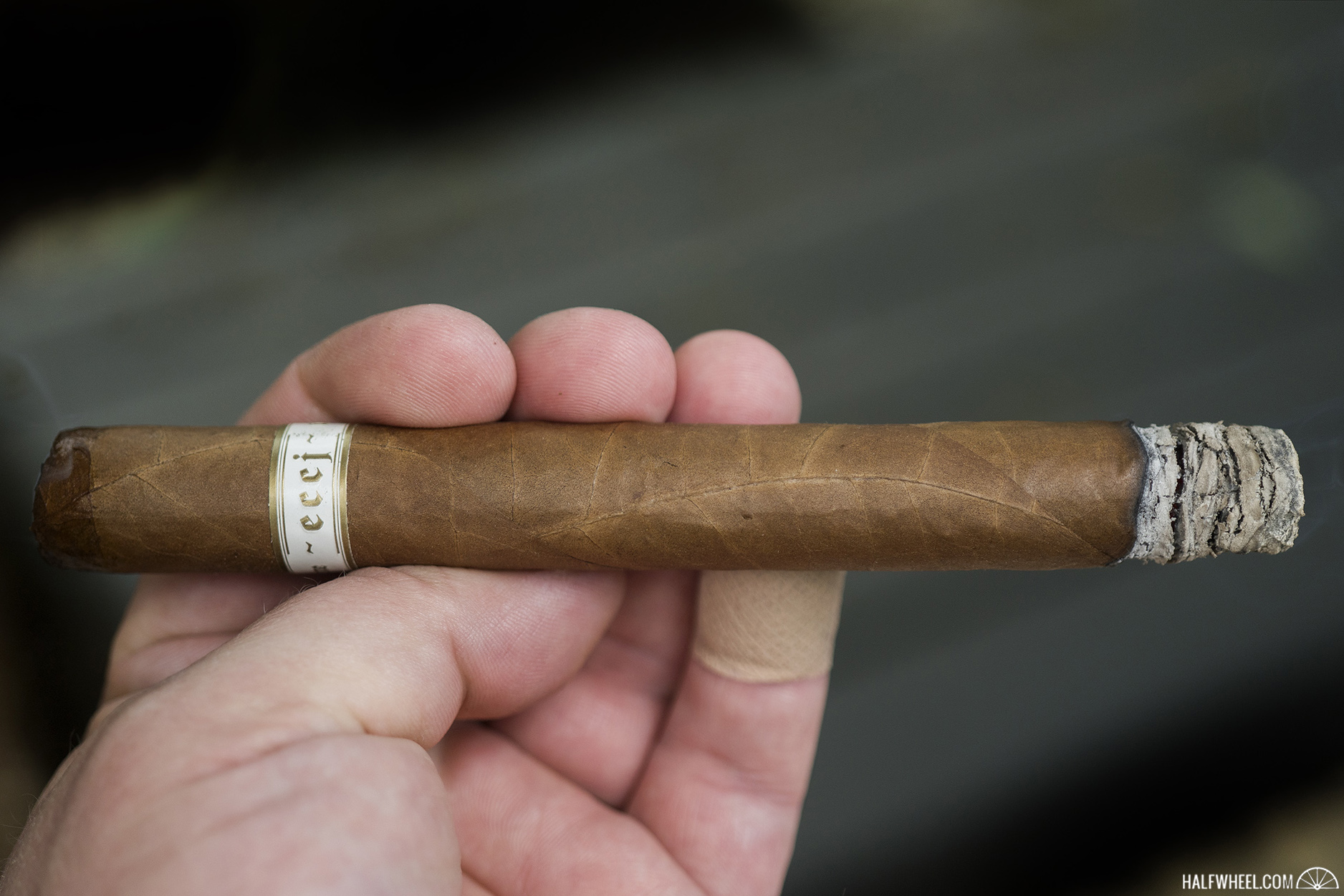 Construction-wise, the draw on the Illusione is excellent throughout the cigar after a simple straight cut and while the burn did wander enough to need a touch up around the halfway point, there were no other issues. The overall strength started out quite mild, and while it did increase noticeably, it ended up barely hitting a point under the medium mark just as I put the nub down with about an inch left after one hour and 52 minutes of smoking time.

Even after more than four years of age, the Illusione ~eccj~ 20th continues to be one of the best cigars I have smoked from Illusione. Exceedingly creamy, excellently balanced and wonderfully constructed, the cigar is a joy to smoke, easing me into a profile that is full of creamy nuts, cinnamon and milk chocolate sweetness, with some floral notes and white pepper to keep things interesting. There is a bit of a drop off in the final third, but even at its worst, the ~eccj~ 20th is better than the vast majority of cigars no the market at the moment. While I think the original release still has some gas left in the tank, it is smoking amazingly at this moment if you happen to have one or more in your humidor.