Cigars have long been used to commemorate the life of a person: many cigars are named for people, lines have been released in  celebration of the Day of the Dead, and countless off-the-shelf cigars have been smoked to celebrate the arrival of a person to earth and then in memory of those who have left this earth.

While not likely a familiar name to American cigar smokers, for those in the Netherlands, the van Horssen name is synonymous with cigars. Brothers Ilja and Sasja van Horssen built Longfiller Co. into a premier cigar importer for the country, with a list of cigar companies that reads like the Who’s Who of the industry: Arturo Fuente, Ashton, La Flor Dominicana, My Father Cigars, Oliva. Padrón, Tatuaje and many more. In addition, Sasja van Horssen is the owner of Cigaragua, a cigar shop that carries only Nicaraguan-made cigars, and he has a Fuente-exclusive store in the works for Amsterdam.

Unfortunately, Ilja van Horssen passed away on July 14, 2006 at the age of 36. In addition to co-founding Longfiller Co., he was the owner of the Cuesta-Ray and de Graaff cigar shops in The Hague, Netherlands.

To memorialize his brother, Sasja came up with the idea of releasing a cigar every December, beginning in 2007 with the Ilja I, an OpusX in an A vitola. Since then, the OpusX line has made four appearances, including an Angel’s Share blend, and the line has also included cigars from Oliva, Padrón, Joya de Nicaragua, Drew Estate and this release, which was produced by My Father Cigars, blended by Jaime García and rolled by him and his father, José “Pepín” Garcia. It was released in December 2014 as the eighth cigar in the series. 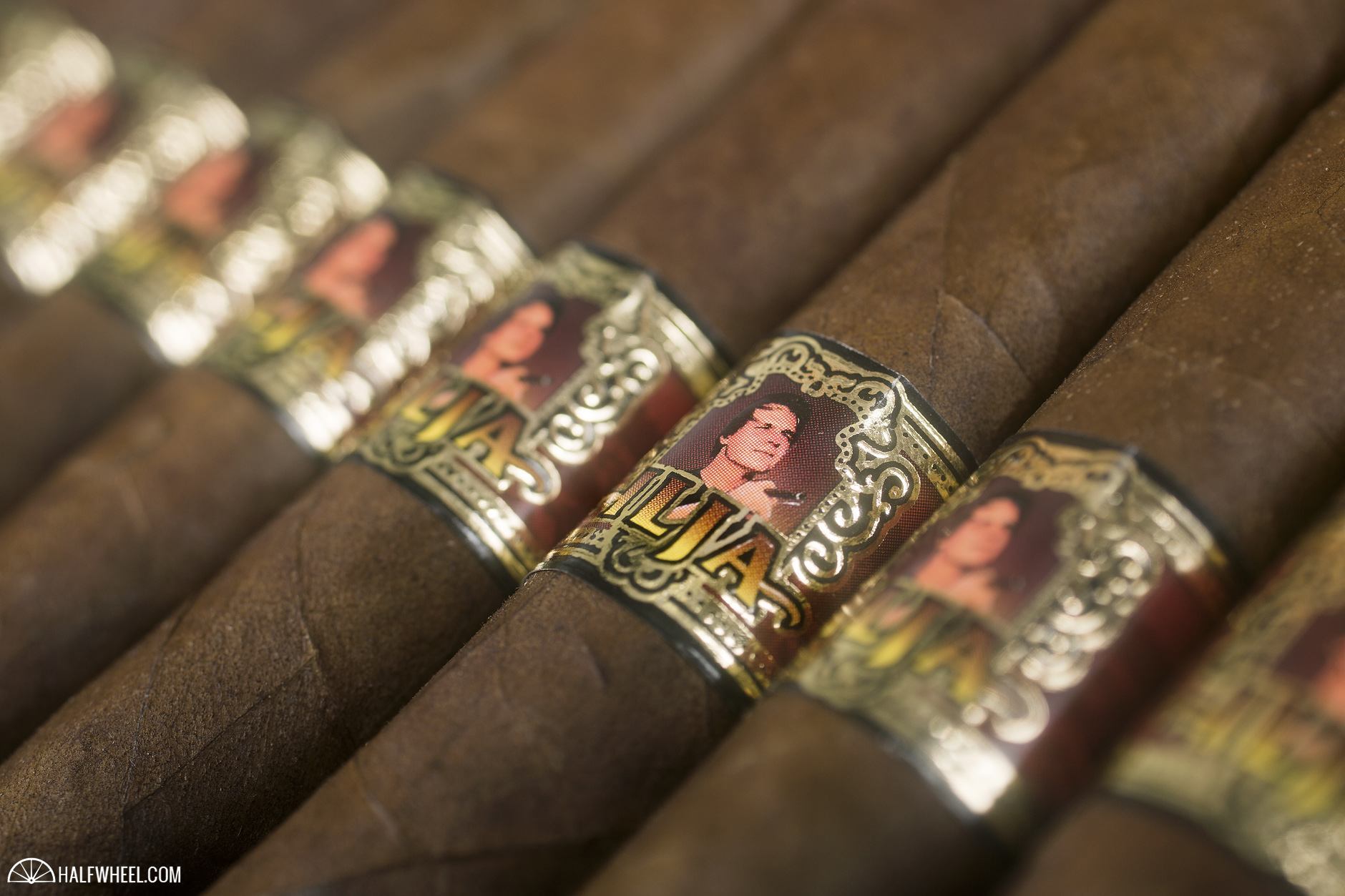 While other releases have drawn on existing lines, there is no formal name for this particular cigar, and it’s not said to be part of any of My Father’s existing lines. In fact, none of the blend details have been disclosed about the cigar. This was also the first year when the manufacturer’s band was not used, as the Ilja band had previously been used for a foot band. Those bands do not make mention of what the cigar is, or which one in the series it is.

None of the cigars in the Ilja series are for sale in the traditional sense; instead the company invites 36 people who “really enjoy smoking” according to Sasja van Horssen, to one of two shops: Van Dalen Cigars in Rotterdam or the Studio Tobac Cigar Lounge in Den Bosch. Whatever the customer ends up paying goes to charity.

“The reason we do it the way we do it is simple,” said van Horssen. “We want our brother to be remembered by others than us for what he was for them: a person with great passion for handmade cigars who brought a great amount of fantastic smokes into our country and onto the lips of many cigar enthusiasts.”

Each release is made up of 36 boxes of 13 cigars, each of which bear the same design as the band, which features an image of Ilja smoking a cigar. Of those 36 boxes, one is always reserved for Ilja’s children, one goes to his parents and one goes to Sasja. “I am the only out of the three that always smokes the box,” he said.

Here’s what I said about the Ilja VIII when I reviewed it in January 2015:

If someone is going to make a cigar that is over nine inches long, it had better make use of every inch in crafting a flavor journey, and that is exactly what the Ilja VIII does. While nearly four hours is a long time to smoke a cigar, and the Ilja VIII isn’t the most practical cigar to fire up, this stick does everything it can to keep your attention with every puff. Like all A vitolas, the Ilja VIII is an impressive visual of a cigar, evoking a similar experience to standing next to a 7-footer who plays in the NBA. Because of the size of the wrapper leaves needed to properly roll an A, that can limit the selection a bit, but there is seemingly nothing wrong with the leaf on this cigar. It is a dark brown hue with a good vein structure, a bit of toothiness, and some oily sheen remaining even after more than six years since its creation. It’s a firmly rolled cigar, certainly inline with current standards. The roll also looks good; there are a few small bumps and the veins call attention to the seams, but both of those are minor issues that can affect cigars of any size. The foot of the cigar offers a meaty aroma at first, similar to pulling a piece of meat out of a sealed bag to prep it for cooking. There’s a bit of earthiness and pepper in the background, though I’d hesitate to call either prominent. The cold draw is perfect in terms of airflow and shows no ill effects of the size. Flavors are mild and I find my lips tingling from the tobacco before I can identify any flavors. There is some pepper leading a mild earthiness with some clay accents, but beyond that the cigar doesn’t seem to want to reveal much.

The Ilja VIII starts off both smooth yet peppery, imparting an easy tingling of the lips which I’m inclined to think is the tobacco itself as much as the smoke. I’m always hesitant to say something along the lines of “I can taste the age on this,” so I won’t, but it certainly doesn’t start with any sort of pepper bomb. As the cigar opens up, there’s a bit of very subtle chalky earth emerging, which then moves into a white pepper-led expression avoiding any sort of funkiness. It’s not long into the cigar that it reveals a need for regular puffing, as a slightly longer than average break results in needing a relight. The cigar begins slowly picking up black pepper, nudging the flavor intensity slowly up the scale without pushing a bit of creaminess out of the profile. Retrohales thus far have been very mellow and approachable, with just a subtle tingle of white pepper standing out from a lighter-bodied smoke with a bit of creaminess. Through the first third, about the only thing I can say is that the cigar seems to be burning a bit quickly, even with the relight issues. Otherwise, the cigar is near perfect, particularly if you like subtlety and nuance. In the second third, that begins to evolve, picking up black pepper that energizes the profile. There’s a building woodiness as well, and while those capture my attention, it’s the new complexity that reveals itself not long after where the payoff is to be found. For a cigar with several years of age on it, I’m impressed with its rapid transitions as it approaches the midway point, as the profile quickly turns robust and more pointed as the black pepper sharpens. By the midway point, the cigar continues to burn well and now sits at medium-plus in flavor, while body and strength are closer to medium. The ascent from the mild beginning of the Ilja VIII to where it sits just past the midway point isn’t perfectly smooth, but the points it stops at along the way are all very enjoyable. Heading into the second half, the flavor still has black pepper leading each puff, and while woodiness continues to be the secondary flavor there is a building dry earthiness not far behind. Creaminess has largely subsided, with puffs where it seems completely absent. What isn’t absent is the finish, which is slightly rough on the palate thanks to the pepper and earth. The final third begins very close to full-flavored thanks to a lot of pepper leading a somewhat thin-bodied smoke, as the earth and wood have dialed back a few ticks. What earth is present is light and dry, and I find myself trying to resolve the gap between the intensity of the pepper and the thin body, as a fuller base would seem to pair better. Regardless, the experience is still very good, particularly with a bit of water to rinse off the still very lingering finish. As is fitting, just as soon as it seems like the final third’s path has been laid out, creaminess returns to the profile, adding body and cohesiveness to the flavors. The retrohale also seems to now pair better with the flavor than it had previously, as the white pepper is toned down just a bit and provides an accent rather than its own fuller sensation. The changes keep coming as the wood now sharpens up a bit, and the tongue gets a steady tingle with each puff. Smoke production is plentiful, and once the pacing of puffs is figured out, the cigar burns quite well. There are a few spots where the burn line gets askew, but I never considered touching up the cigar. The cigar eventually runs out of tobacco and transitions after about two hours and 20 minutes of smoking time, a seemingly low number for such a big vitola.

I would be lying if I said that I had vivid memories of this cigar when I smoked it approximately six years ago, other than it was very enjoyable and that I looked forward to the day that would come when I could light another one up for a redux. My original notes still apply here: this is a long cigar that never takes a puff off and keeps the flavor steadily evolving from start to finish. It offers a journey in flavor, strength and body, and plenty of enjoyable time with which to remember Ilja van Horssen. Even though I didn't know him, I am left to believe that the quality of this cigar that honors him is a reflection of his quality of character, and those who were fortunate enough to know him, let alone smoke this cigar, have that much more to be appreciative of.