As a special offer for retailers who attended the 2016 IPCPR Convention & Trade Show, HVC Cigars offered an additional size of its La Rosa 520 line, a 6 1/4 x 48 toro called the Reyes.

The guts of the La Rosa 520 remain the same in this new size; it’s a Nicaraguan puro made by Tabacos Valle de Jalapa S.A. (TABSA) in Estelí, Nicaragua and using a corojo 99 wrapper from Jalapa. Pricing is set at $11.80 per cigar or $118 for one of the 500 boxes of 10 cigars produced. 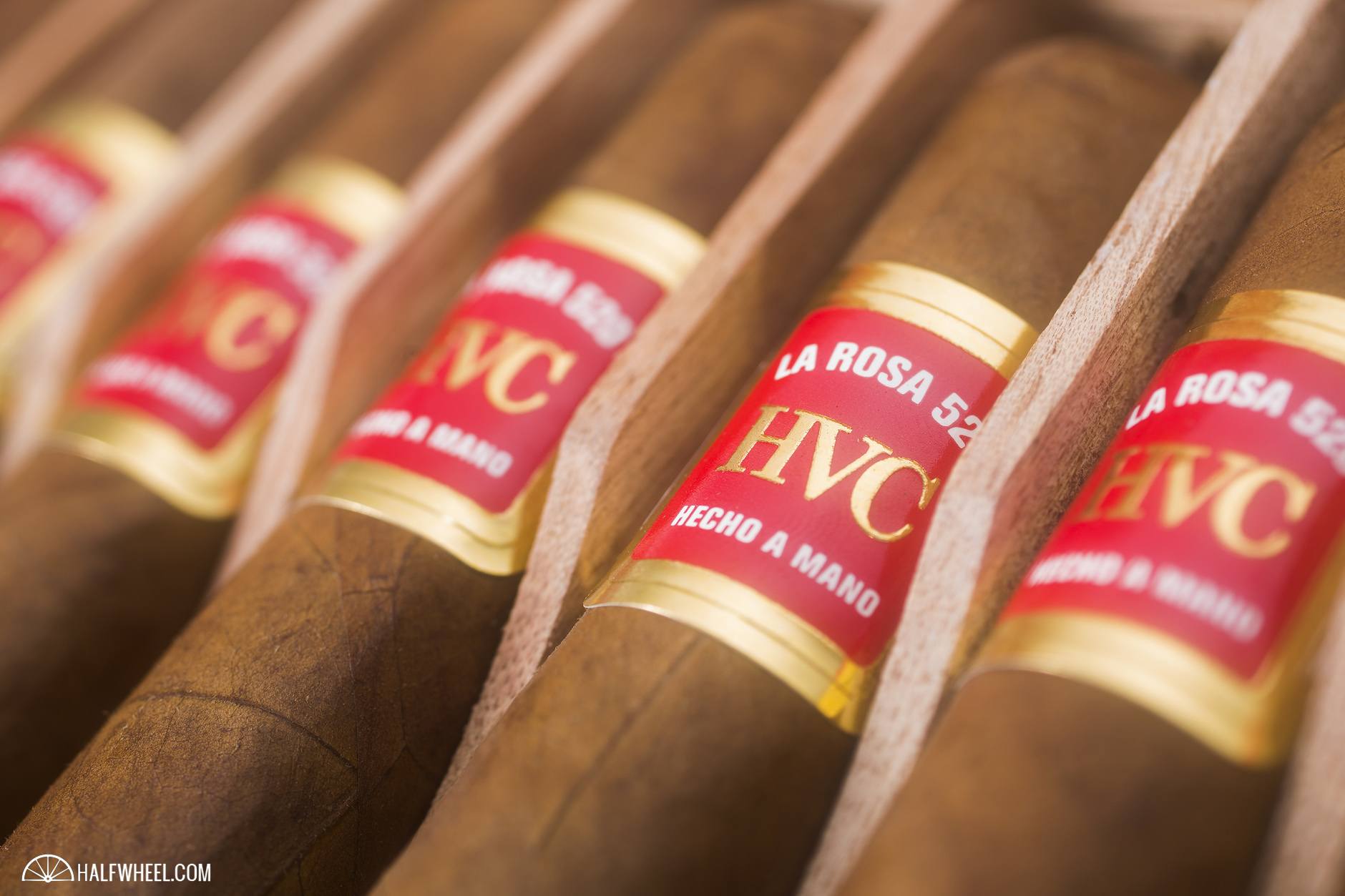 As fans of HVC know, the company gets its name from an abbreviation from Havana City, Cuba, where company founder Reinier Lorenzo is from. Building on that theme, the La Rosa 520 line gets its name from the address where he lived in the city, with the boxes making that even more apparent as they bear a stamp that says “Special Delivery From: La Rosa 520 Havana City 10400.”

Tobaccos come from the TABSA-affiliated AGANORSA company with Lorenzo saying he was looking for tobaccos that reminded him of the San Luis and San Juan y Martínez regions of Cuba’s Pínar del Río province, which is the westernmost province in the country and home to the island’s famed tobacco fields. 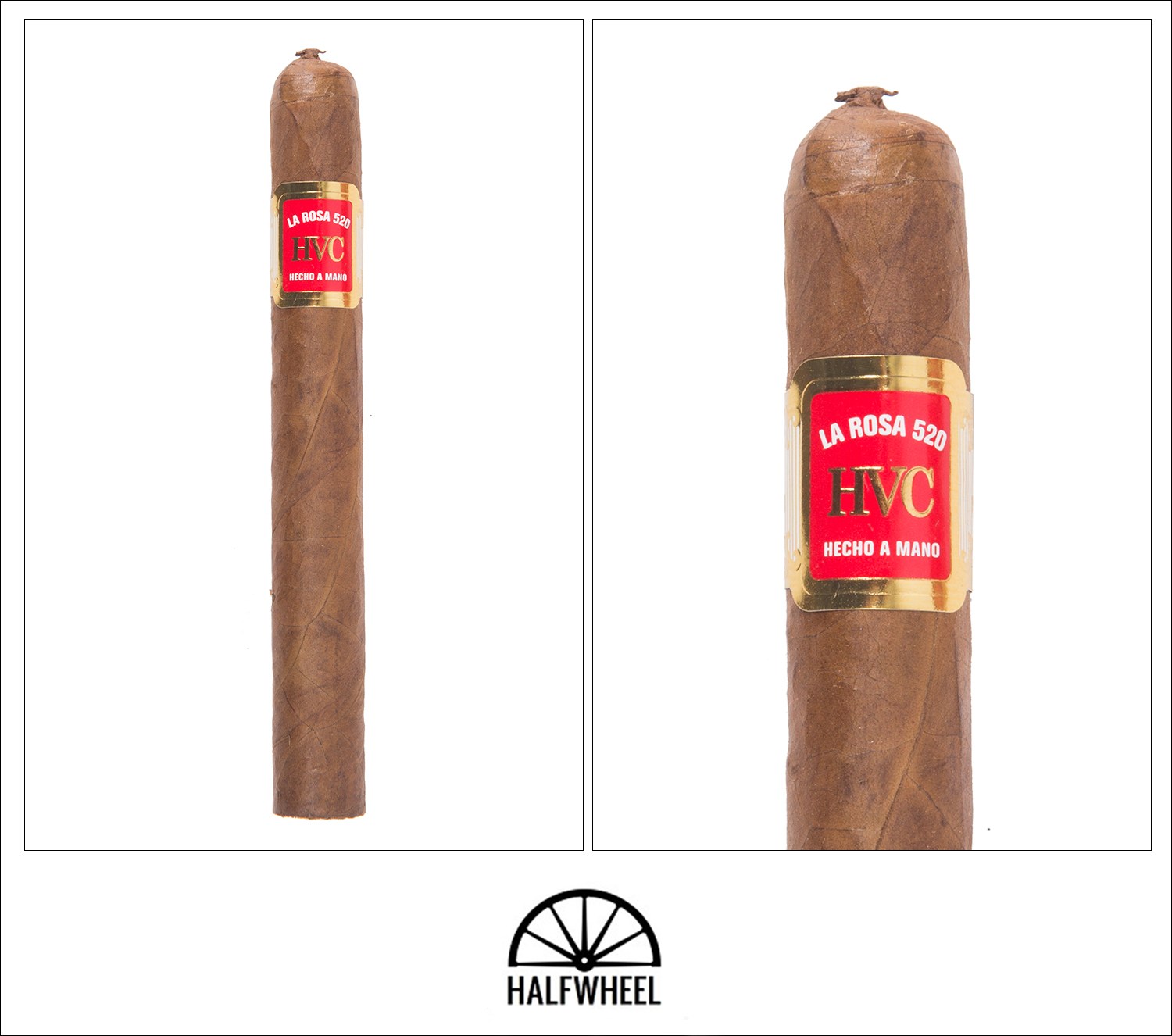 I hate to call a cigar nondescript, but other than the short and stubby pigtail, the HVC La Rosa 520 Reyes is just that. The seams are flat but visible, and the wrapper offers a fair amount of vein structure to attract the eyes. The color is a fairly uniform shade that sits between Colorado claro and Colorado, though there are a few spots where the hue lightens a bit. A tiny pigtail sits atop a triple-capped head that is well applied, though the decoration looks a bit more like a fantail in all fairness. It’s a firm cigar without much give, though by no means does it feel overfilled or abnormally hard. The foot of the cigar offers a delicately sweet aroma that immediately has me thinking of bubble gum before conjuring up ideas of delicate pastries and assorted berry jams. There is a very faint hint of pepper tucked well into the background that only comes out after repeated sniffs. The cold draw is almost spot-on in terms of airflow and in the cigar with the dominant bubble gum note further shows it, making me think of Hubba Bubba Bubble Tape with notes of strawberry coming through most vividly. It’s not a consistent flavor however, as the other samples shift to wheat bread and faint strawberry jam.

There are a few flavors that I see my colleagues describe in cigar reviews that I rarely find myself experiencing, but the HVC La Rosa 520 Reyes crosses one of those off: bubble gum. The first sample leads off with the unmistakable flavor that combines a bit of dried strawberry with confectioners sugar to produce a distinct sweetness and flavor, though one not shared by every sample. The second is much more bread and wood driven, and as such seems to set a better launchpad for the pepper that the cigar contains. The bubble gum—when it appears—is a defining but not lasting flavor, as the cigar pivots to bring in some pepper and light coffee that is transported by a thick, creamy smoke, and I also get tastes of campfire and chocolate, almost enough of both to call it a s’more. The first clump of ash falls off at about an inch in length, and when it departs the cigar takes another step forward in pepperiness, particularly through the nose, and while the flavor doesn’t turn explicitly coffee-like, the suggestions of it are there with touches of acidity and roasted beans. The draw and burn have both been quite good, as has smoke production. After a first third that had a few transitions and variations, the HVC La Rosa 520 Reyes finds a consistent track to start its second third, gravitating towards the drier profile offered by smoky wood, coffee, wheat toast and pepper. By the midway point, the cigar has taken on a decidedly dry profile that has an underlying note of wood and light coffee that easily yields to the black pepper. While the sweetness is largely gone, I do find myself getting occasional hints of Butterfinger candy on the palate, namely the chocolate coating and peanut butter core, while touches of toffee—à la a Heath bar—also can be detected. There are also touches of campfire smokiness that add a bit more allure to both the flavor and aroma. The technical performance of the Reyes remains above average, as the consistent and even burn are so good that it’s easy to overlook them since neither needs any sort of attention. While there isn’t a dramatic shift in flavors at the start of the HVC La Rosa 520 Reyes’ final third, a bit of peppermint begins to come in and I’m getting a few suggestions that the bubble gum flavor might not be far behind, though it turns out not to be the case. Instead, the peppermint and sweetness quickly bow out so the pepper can return with brightness and a good bit of vigor for both the nose and tongue. The La Rosa 520 Reyes closes out with a bit less pepper and one more appearance from the early sweetness before needing to be put down. It nudges its way into medium-full bodied and strength at times, though tends to say a tick or two below both ranges for the better part of the cigar. The fact that 500 boxes of the Reyes were made--more than were made for the first two runs of the La Rosa 520—should be an indication of the faith that Reinier Lorenzo has in this cigar, and I'm pleased to say it's well-founded. Other than the bubble gum note at the start of the first sample, each of the three cigars I smoked were incredibly consistent and rock-solid in terms of flavor and aroma, with construction so good it hardly gets thought about. I'm incredibly impressed by where these are now and hopeful that time will be good to them, as this is a cigar I wouldn't mind having in my humidor.