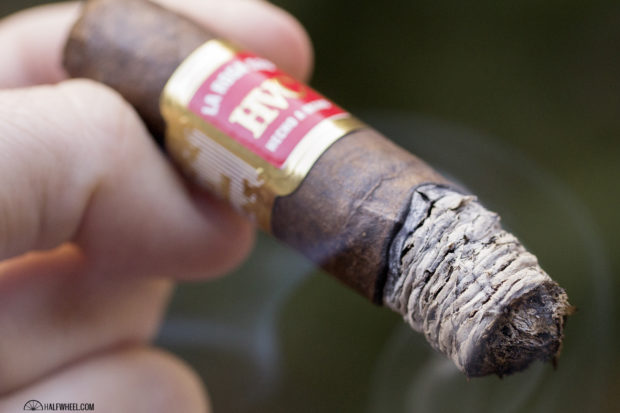 For the first maduro version of the La Rosa 520, HVC decided to keep it limited. Just 300 boxes of 10 cigars, and all headed to SmallBatchCigar.com as an exclusive release to the online storefront of Maxamar Ultimate Cigars, a retailer in Orange, Calif.

The cigar is a 4 1/2 x 52 robusto vitola that uses a Mexican San Andrés maduro wrapper over Nicaraguan fillers from Jalapa, a change from the Nicaraguan corojo 99 leaf that the original blend wears. “La Rosa 520 line holds a very special place in my heart,” said Reinier Lorenzo, HVC’s founder, in a statement to halfwheel. “It never fails to bring back memories of my home in Havana City. I’m really happy to welcome Small Batch Cigar to my home and have an exclusive cigar just for them. ”

More specifically, the La Rosa 520 name comes from his home address in Havana, Cuba, a very localized tie-in to the HVC of the company’s name, which stands for Havana City. Say the word maduro and this is the shade of wrapper I would expect to see: a deep, dark brown Mexican San Andrés leaf with a good amount of tooth and a fairly dry, rustic appearance. The three samples vary in firmness, from quite firm when squeezed to offering more than just a touch of give. Roll-wise, the cigar looks decent, with some caps a bit less than perfect in terms of how the tobacco was laid and the shape of the head. Like most San Andrés wrappers there’s some tooth to be found on the wrapper, veins are noticeable, but unobtrusive, and the coloration is quite even. The wrapper has no distinct aroma on its own, while the foot has some subtle earth to it with varying amount of pepper. One sample has a bit of raspberry syrup sweetness, one has an aroma trying to get to ground coffee, and one sample has absolutely no outright pepper or sweetness. The cold draw is a bit firm on the firsthand third samples and both have a surprising creaminess as the first thing to hit my palate. It’s a bit sweet and there’s hardly any pepper to be found. The second is a touch more ideal and shows more wood and light pepper.

The HVC La Rosa 520 Maduro starts off rich and earthy, with a bit of berry sweetness and various amounts of black pepper; the lightest, a sprinkling for some tingle, and the heaviest a bright and somewhat stinging experience for the nostrils. It’s hard to look past the copious amounts of pepper when the cigar is at its most vibrant, and while it’s not tasting like red chili pepper, the physical effect is fairly similar. The first clump of ash falls off the first sample unexpectedly before it reaches a half-inch in length, and because of that I’m tempted to knock it off a bit earlier than I would otherwise on the other cigars. Pepper continues to dominate the blend and be the bulk of what gets noted about the cigar, while the draw, burn and smoke production are all quite good. The second third of the HVC La Rosa 520 Maduro doesn’t offer much in the way of big changes to the profile or strength level, though the background flavors and texture of the smoke seem to have softened ever so slightly, while the pepper begins a more gradual downtick in its intensity, putting the cigar somewhere between medium-plus and medium-full in flavor and strength. It’s just around the middle point where the cigar takes an appreciable step towards the medium mark, and in the case of the stronger cigars, it’s a positive step. There’s a bit more creaminess, some alluring fragrances of cedar and what I want to label as cotton candy, though that doesn’t feel quite accurate. Unfortunately, it is fleeting, a change I discovered by trying to take a very slow retrohale, during which I was greeted by the return of the bright pepper that was prevalent earlier. The HVC La Rosa 520 Maduro makes yet another pivot in the flavor profile as it gets into its final third, picking up an aroma of thin chocolate and fruit-centric coffee; if you’re in to the more modern varietals of coffee that are sold on having specific tasting notes, you’ll appreciate what the cigar has going on at the moment. There are also some spots where the profile shifts up the earth note, taking on a bit more clay and a very subtle chalk undertone, both of which dry out the palate and reinforce the effects of the pepper and other tingling sensations. The final puffs can get a bit hot, so a slower puffing rate is needed to minimize that effect, but otherwise, the cigar smokes down quite well, holding its burn line fairly even while still putting out a good amount of smoke. Say the words Mexican San Andrés maduro and you’ve got my attention. Yet it’s also one of the varietals of tobacco I find myself being the most critical about, and I have a feeling that’s what drove most of this cigar’s score. There are numerous parts of this cigar to really like, possibly even love. But then there are some parts where it falls short of some of the better San Andrés leaves I’ve encountered, namely in terms of sweetness and showing the better parts of terroir. The overall impression is still well above average, and while I don’t know if I’d go out of my way to buy a box, I’d be lying if I’d said the thought hadn’t crossed my mind, especially if I saw one in front of me. The smoking experience is quite good from a technical standpoint, and save for a few spots where my mouth gets dry or the pepper just tries to be a bit too much, the flavor experience is equally enjoyable. If forced to choose, I think I’d stick with the original blend of the La Rosa 520, but this maduro option makes for an enjoyable change of pace.