It would be easy to start this review like many others, with a cigar company celebrating an anniversary with a new limited edition. That is true, but an anniversary is not what I think is the most interesting aspect of the HVC 10th Anniversary.

Rather, it’s a tobacco being used in the filler, a fairly new varietal called corojo 2012. Corojo 2012 is a Cuban-seed tobacco that has been showing up on a handful of projects coming out of Tabacos Valle de Jalapa S.A., the Estelí, Nicaragua that is owned by AGANORSA Leaf. The factory produces cigars for Illusione, which is using it in the filler of the PIV Robusto, a cigar created for actor Jeremy Piven, while AGANORSA Leaf  will be the first to use the varietal as a wrapper for its new Guardian of the Farm Cerberus line.

Corojo 2012 is notable not just for being new, but because the company says it provides more character and strength, particularly when grown in Jalapa and then used as wrapper.

But in the case of the HVC 10th Anniversary, the tobacco is part of the filler, joined by Nicaraguan corojo 99 and criollo 98 tobaccos. The binder is a Nicaraguan leaf of undisclosed varietal and region, while the wrapper is a Nicaraguan corojo 99 leaf grown in the Jalapa region. The cigar is offered in a 6 1/2 x 50 toro extra vitola, with production limited to 2,000 boxes of 10 cigars being produced, and each cigar priced at $15 per cigar. 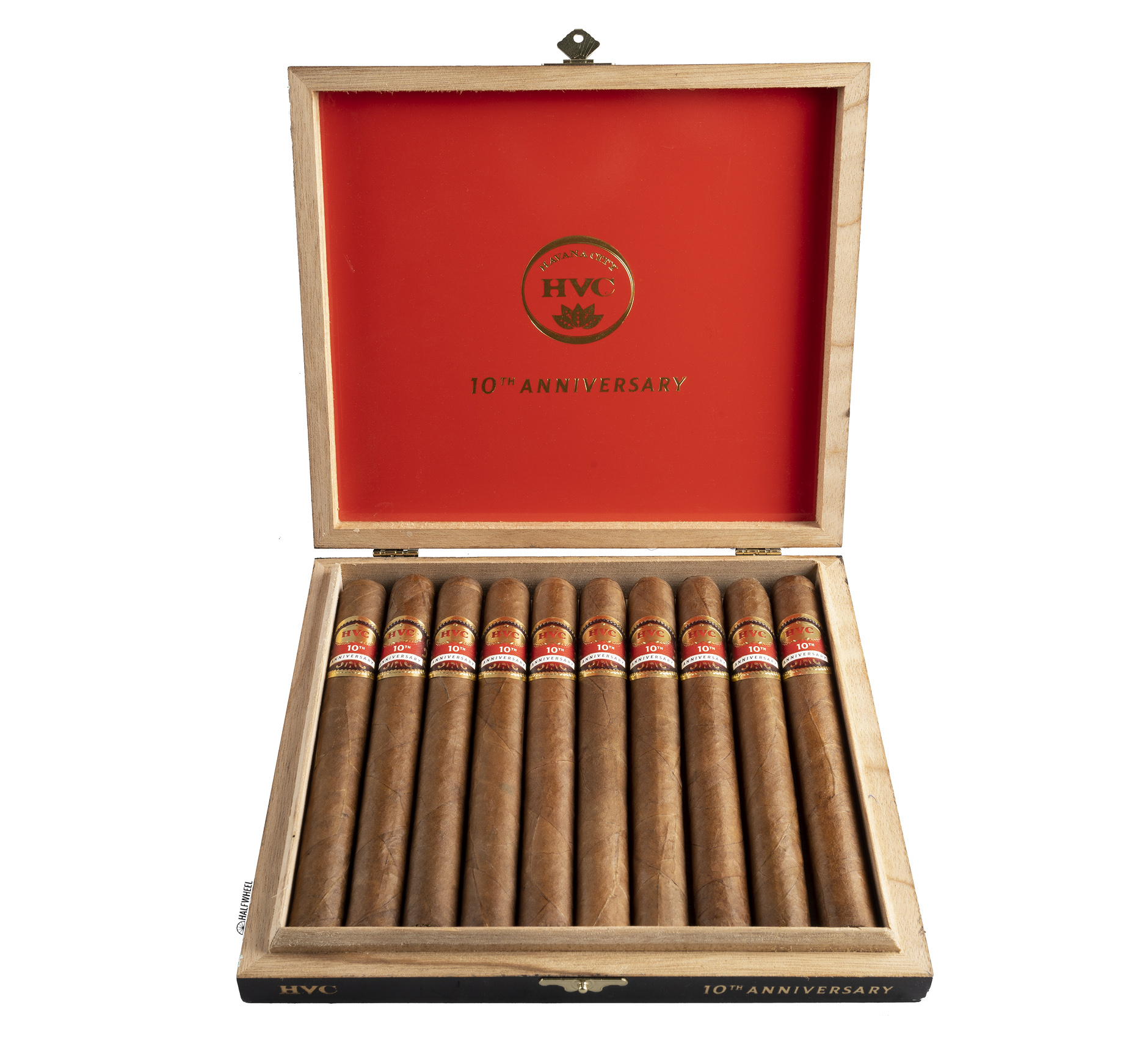 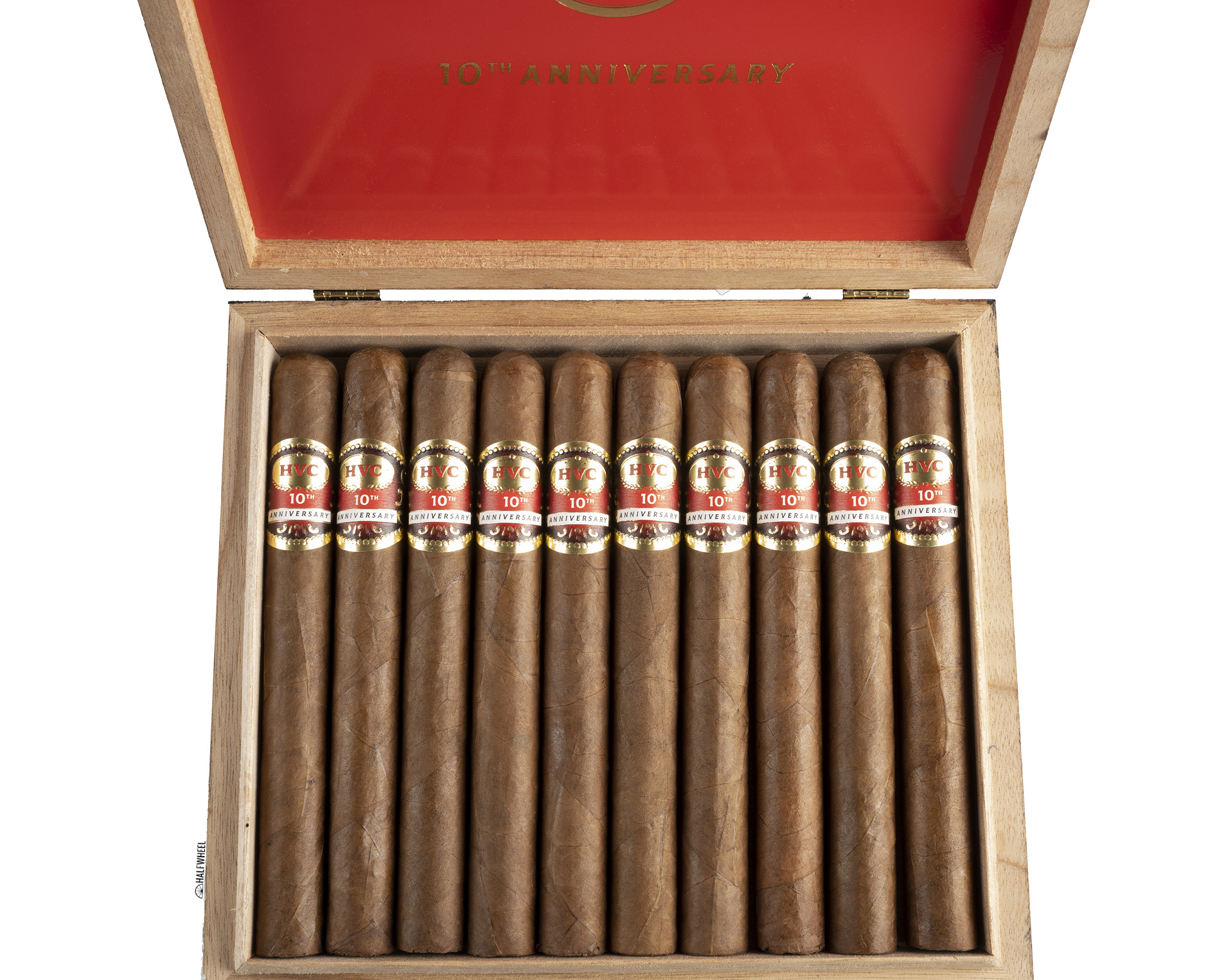 “I am happy to announce the release of our very own ’10th Anniversary’ cigar. It has been 10 years of consistency, perseverance and hard work and I am excited to celebrate with this special cigar,” said Reinier Lorenzo, HVC’s founder, in a post on Instagram. “Needless to say, I am extremely grateful to every single person who has supported me and our brand, all the clients, sales reps, the people from Nicaragua and my family for encouraging me throughout the years. It is a big milestone that only motivates me for the next 10 years ahead.”

After being slated for an August release, it began shipping in the second half of September. More on this in the notes, but for some reason this toro extra looks like a Churchill, a long and comparatively slender vitola compared to many of the chunkier cigars on the market today. The wrapper of the HVC 10th Anniversary is fairly evenly colored and without much distraction, though one sample has what looks like a small oil stain, and the placement of the bands can lead to a vein showing up on the front of the cigar. The color is a darker-than-medium, nuttier shade of brown that reminds me of cocoa in certain lights. There are a decent number of veins, and with one cigar I couldn’t pick an orientation for the band where there wouldn’t be a visible vein on the front of the cigar. It is rolled firmly and consistently, and I’d go so far as to call one sample outright hard. The foot of the first cigar has a thick and fairly uneventful aroma that has me thinking of various bread doughs awaiting being formed and baked. As such, I’m a bit more aggressive with a sniff of the second cigar, and find more pepper and a bit of tartness that reminds me of some room temperature green apples. The cold draw is surprisingly firm across the samples, giving me that cold milkshake sensation so much so that I’m a bit concerned about how air might move once the cigar is lit. The flavor isn’t much more exciting than the aroma, nor does it seem to offer much more insight as to what awaits save for a bit of creaminess The tobacco provides a bit of a tingling sensation where it touches the lips, but supporting flavors are fairly limited.

The HVC 10th Anniversary starts out with a fairly tame first puffs; there is a bit of pepper to be found which helps to wake up the taste buds, while creaminess and a bit of pizza dough soften the smoke. More pepper can be found by way of retrohales, which deliver a fairly bright punch of black pepper to the nostrils. There is some point where that pepper wakes up to both senses, and when it does it creates a real zing of pepper to the palate. There’s a bit of oiliness to the smoke, which seems to add a bit of a funky flavor as well, either on its own or by way of some chalk. Just after the first clump of ash falls, there’s an interesting hint of peppermint that hits my palate; it’s the thinnest of threads of flavor, yet its distinctness is unmistakable and the peppermint adds a quick hit of aromatic freshness to the mix, not too unlike an Altoids mint or a candy cane. Pepper continues to steadily build and as the first third comes to a close, it is at its brightest and most vibrant through the nose, hitting the olfactory nerves on an almost individual basis as opposed to the blunter, heavier punches that some other cigars deliver. Flavor is medium-plus to full, body is medium-plus, and strength is medium. Construction is good, even with a slightly firm draw but plenty of smoke and an even burn line.

Continuing the building pepper from the end of the first third, puffs at the start of the second third are much more flavorful and full-bodied than earlier. That feeling tends to extend down into the chest a bit, as the first sample of the HVC 10th Anniversary feels like it’s hitting me a bit harder than the average cigar. It’s not a consistent sensation across the three samples, thankfully. The flavor picks up nuttiness and shifts to a white pepper sensation before picking up a very dry toast and wood duo that seems to suck the moisture out of my mouth with each puff. That profile gets the cigar across its midway point and through a good chunk of the second third before picking up a more singular peanut note and black pepper returning, this time giving the cigar a much more robust profile that causes some irritation in the throat with a fine, gravelly texture. Flavor is full, body is medium-plus, and strength is medium but seems to be getting stronger. Construction is still good all around, and thankfully the draw isn’t of much concern. The first cigar seems to be burning a bit slower than average, though I’m not making an attempt to rush through it. As the HVC 10th Anniversary gets into its final third, the robustness remains but shows some signs of mellowing; the irritation that comes along with it is still there and taking a bit longer to diminish. The profile is now a bit earthier, a change brought on by the robustness and pepper, even though it’s not as genuine of a flavor of cigars that exhibit true earthiness or even terroir would offer. There’s a bit of heat developing in the cigar, though I’m also wondering if the sensation might be the irritated nerves in my throat fooling me with a sensation rather than an actual change of flavor. Yet amidst all that, there are some lighter and very enjoyable aromas: a bit of cedar, some campfire and a rich, complex, fruit-based sweetness. It’s not the smoothest of landings—or finishes in this case—but the cigar wraps up in a way that makes me think a bit less than the rougher spots before it. Flavor finishes full, body is medium-full, and strength is now medium-plus if not a tick more. Construction and combustion are both very good. As I mentioned in the introduction, the HVC 10th Anniversary is more about one of the tobacco leaves in it than the anniversary that it celebrates. It's an interesting cigar that has some familiar notes of Nicaraguan tobaccos, and won't be unfamiliar to smokers of cigars made from AGANORSA Leaf tobacco, yet not longer after lighting it will also be new and different, something that I have to attribute to the corojo 2012 in the filler. It is definitely a richer, more vibrant flavor, even if in this instance it oversteps more times than I would like, going from full flavor to irritating for much of the profile. Yet even with that, the experience still manages to be enjoyable, certainly enough to show the promise of the leaf. Maybe a bigger ring gauge with a different blend of tobaccos to soften the strength would do the trick, though that is a discussion I will leave to those tasked with blending the tobaccos. What I will say is that there's a good chance this cigar helps show that corojo 2012 tobacco has a place in the cigar industry, and one that might be looked back on as one of the first examples of a tobacco you could well be seeing much more of in the not-too-distant future.