Last year General Cigar Co released a special edition Hoyo de Monterrey to celebrate the 150th anniversary of the brand. Called the Hoyo de Monterrey Edición de Cumpleaños 150, it sported a new band that just had Hoyo in the logo, departing from a more traditional band and logo. This year they followed that limited release with a new regular production line simply called Hoyo.

Featuring the same band and logo design from the Edición de Cumpleaños 150—minus the secondary anniversary band of course—Hoyo uses many of the same tobaccos as it’s predecessor as well. The deep brown wrapper with the primarily black band creates a very dark presentation. The wrapper itself is slightly rough and has quite an oily feel to it. Overall the cigar only has a little give to it, more what I would call firm than hard. The aroma off the wrapper is made up of bright grass, earth, leather and a musty wood aroma. With the cold draw, the first note I get is a strange sort of chemical taste, which isn’t entirely unpleasant but more along the lines of artificial flavoring than anything. Unable to really pin down exactly what it is, it disappears after a few draws leaving dark cherries, cocoa and a touch of citrus.

Starting into the first third I get some dried fruit, light pepper, spice and a touch of oak. Unfortunately the draw is very open, and while it’s more open than I would prefer, it still is productive, with plenty of smoke on each draw. The burn line is quite jagged, and flakey ash seems to precariously hang on the end of the cigar, threatening to fall apart in my lap only a half an inch in. Charred oak has moved forward, with the sweeter dried fruit fading slightly. The pepper and spices are somewhere in the middle, with a slight peanut note that has appeared as well. As I move into the second third, there’s a touch of the chemical aroma back from the cold draw. The rest of the flavors of charred oak, pepper, spices, peanuts and dried fruits are still there, just overlayed with it. The burn is still a disaster, requiring multiple touch ups and the cigar is still having trouble keeping any sort of semblance of being even. In addition to the burn issues, the ash is still quite flakey, making quite the mess around my laptop and chair. In a good move, the chemical aroma has faded away, leaving the flavors on their own again, unchanged from earlier, which is a good thing. 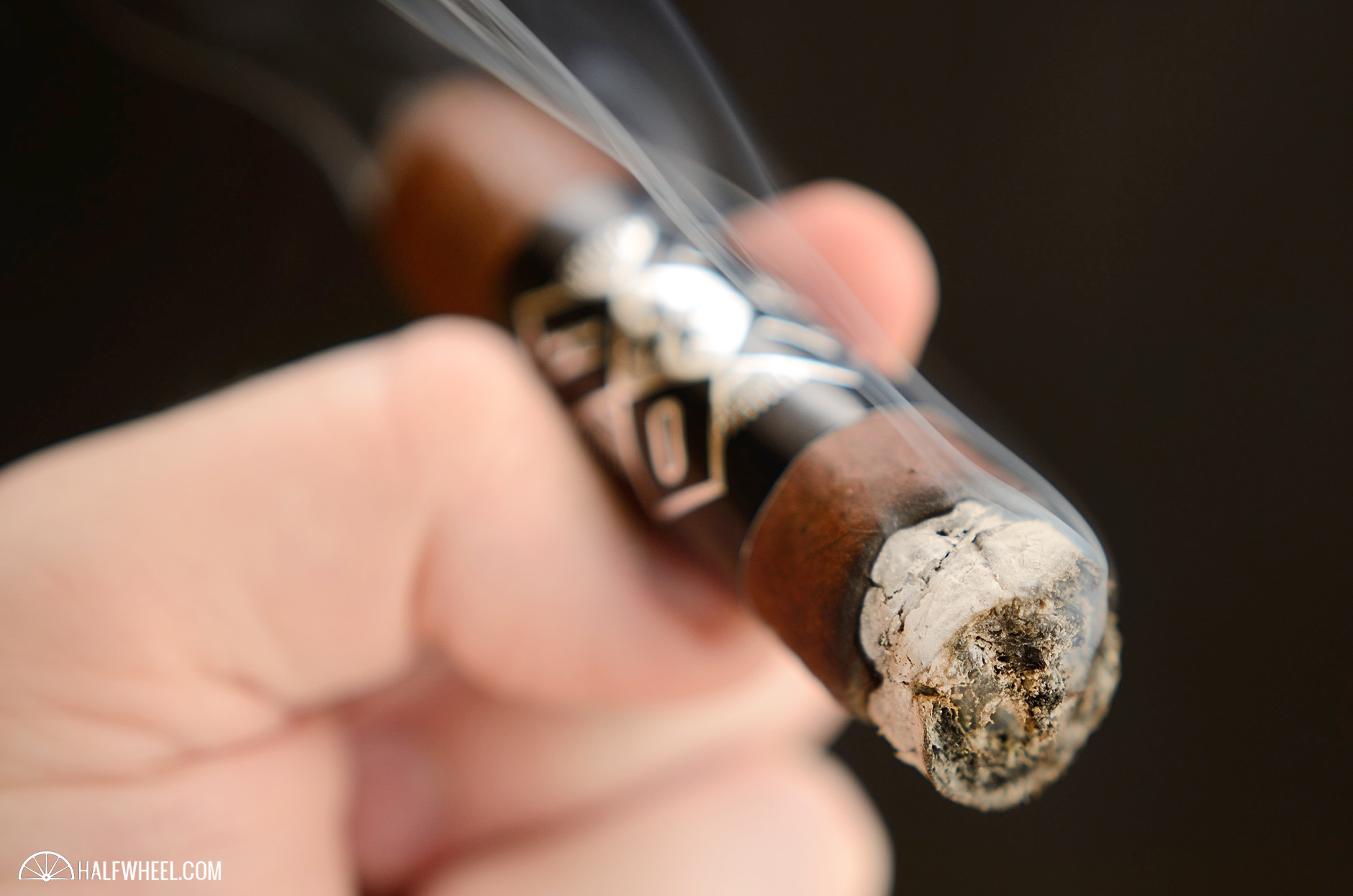 The final third doesn’t see much of a change in anything. Oak, pepper, spices and peanuts still mingle together up front with a sweeter dried fruit note in the background. The burn continues to need help from my lighter, and the ash is still flakey and wants to fall off before the inch mark. The good news is that the cigar does end smoothly and without getting harsh or hot. Despite the weird chemical taste in the cold draw, the cigar presented itself well enough before I lit it up that I was looking forward to trying it. Even when I first lit it, the flavors were intriguing enough that I had some higher hopes for the Hoyo. Unfortunately the profile dropped to just an “okay” level and hovered around there for the remainder of the cigar, while the construction issues plagued the entire cigar from the very beginning. If I could try another size of these that I would know weren’t going to have either a super open or crazy tight draw, I would be interested in seeing if another size worked with the blend, because it had moments where I could tell it wanted to shine. Unfortunately though, the construction issues turned me off from the cigar enough that I probably won’t be seeking out anymore samples of these.