One of the questions I’m frequently asked about cigars has more to do with travel than tobacco. Inevitably, a cigar-smoking friend or colleague will head to Mexico, Canada, or really anywhere in the world where Cuban cigars are allowed to be sold, and they’ll ask me where the best place is to buy some. My answer is always the same: the nearest La Casa del Habano.

This answer points individuals to the franchised locations that exclusively, or mostly, sell Cuban cigars, and often include a bar, lounge and trained experts in the history and offerings of the Cuban cigar conglomerate. The first La Casa del Habano was opened in Cancún, Mexico in 1990, and since then the number of franchises has grown to include stores around the world, with the current number sitting right around 90 stores.

Over that time, Habanos S.A. has created a series of cigars made just for these stores, all of which come bearing a secondary band bearing the LCDH name and logo. It began in 2004, when a trio of Bolívar cigars—the Belicosos Finos, Hermosos No. 4, and Gold Medal—were released as exclusive cigars made for La Casa del Habano franchises, and since that time the list has added a dozen more cigars, with the program becoming more formalized in 2011.

The list of La Casa del Habanos exclusive releases has grown since I reviewed this cigar, and now is as follows:

Here’s what I said about the Hoyo de Monterrey Epicure de Luxe when I reviewed it in October 2017:

Here’s the rub of a cigar like the Hoyo de Monterrey Epicure de Luxe: for as much as I enjoy it right now, I can’t see myself smoking many more of them because I know the flavors are too bright, too young, and frankly not what I imagine this cigar was meant to be. I’m impressed that given its relative youth there is little to no harshness, and given the wrapper issues that Cuba has had, the cigar is pretty decent looking. I’m not a fan of forecasting how a cigar will evolve and perform in the future, but there’s enough in this batch of the Hoyo de Monterrey Epicure de Luxe to make me optimistic that once that tobacco has had some more time to mellow out, this could turn into quite a good cigar that is much more in line with what the Hoyo de Monterrey marca is known. 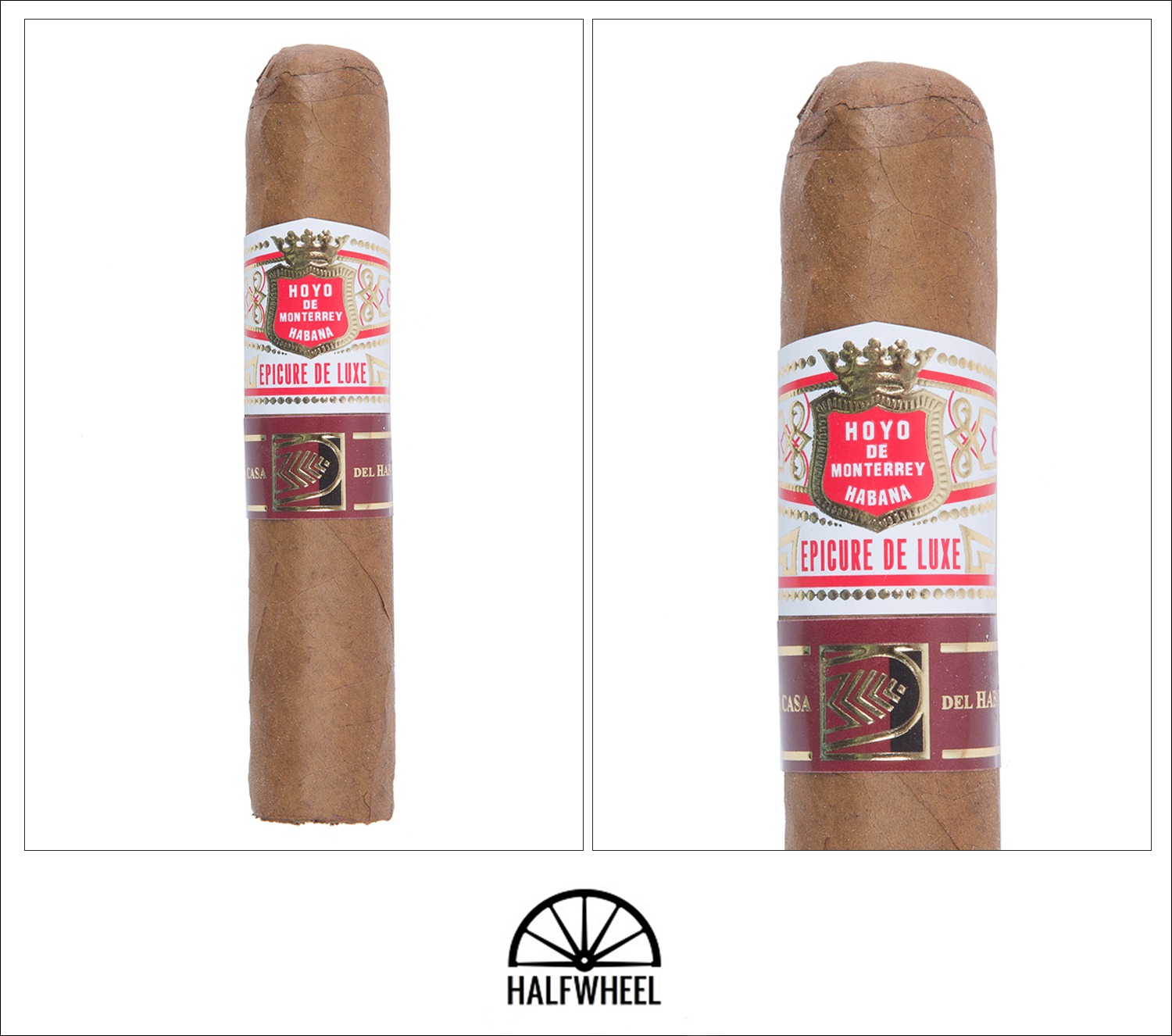 In terms of what occupies the visual landscape of the Hoyo de Monterrey Epicure de Luxe, it’s almost as much band as it is wrapper, thanks to the addition of the La Casa del Habano secondary band. The cigar looks much like any other Hoyo de Monterrey, with an evenly tanned cover leaf that has the familiar Cuban vein structure and a bit of dryness. It’s a fairly firm cigar that is rolled and capped well, with no obvious imperfections or visual distractions, other than that the cap is a bit flat and lacking more pronounced shoulders with which to align my cutter. The foot offers a fairly light aroma of cereal grains, breads and the slightest bit of floral sweetness. The cold draw is a bit firm and noticeably mild, with some creaminess leading the cereal grain.

This Hoyo de Monterrey Epicure de Luxe, which came out of a box dated TOS ENE 17, starts with a much toastier profile than I would have expected, as the flavor is a bit dry and pepper-deficient, but has that warmed grain flavor that is so commonly associated with breakfast. There is a bit more pepper through the nose but it is fleeting, leaving hardly a trace of what first greets the nostrils. While my focus is primarily on the flavor, it’s not long after lighting that I have to remove the secondary band, as the burn line makes steady progress towards it. Pepper and earth continue to build, and I’m once again surprised by the fuller bodied profile, especially considering that Hoyo de Monterrey is described as “delicate yet aromatic” and “lighter to the taste but with great elegance and complexity.” There’s even a bit of char to be picked up ahead of the midpoint line, adding a good bit more character to this cigar than I would have anticipated, and suggesting that nearly a year in the humidor hasn’t done much to mellow things out. The draw and burn are both quite good, and while smoke production isn’t abundant, it’s not lacking. 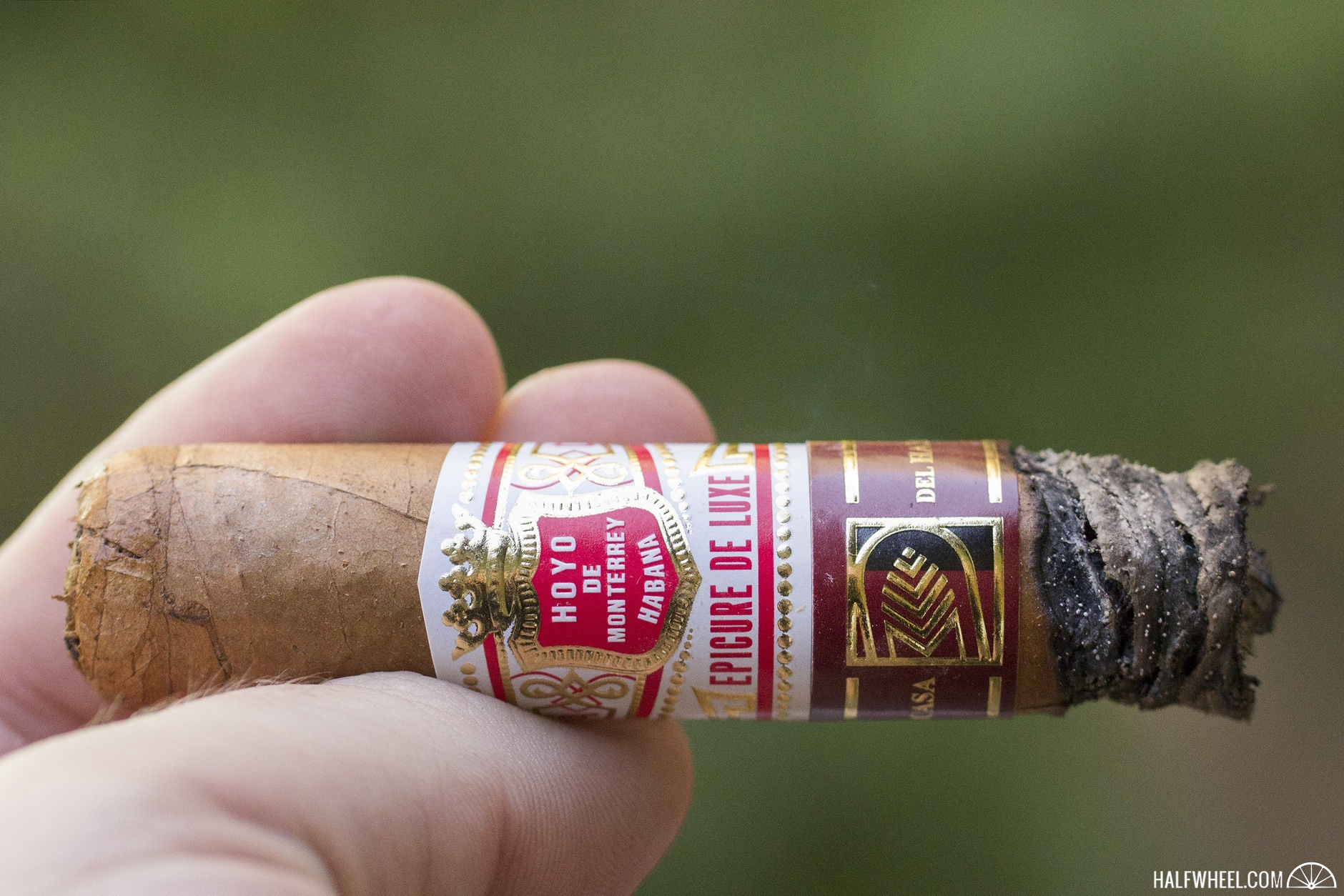 The second half of the Hoyo de Monterrey Epicure de Luxe continues on with the charred flavor, now with dry woods and black pepper as the two undertones that contribute the profile. There is also now more of a nicotine kick coming from the cigar, which when combined with the lingering pepper on the tongue creates an interesting sensation of strength. There isn’t much change in the final inch or so, though thankfully the draw and burn remain quite good. It’s unfortunate that’s not enough to soften the less than pleasing finish that the cigar leaves on my tongue as I put it down after about an hour and 20 minutes of smoking.

When I first smoked the Hoyo de Monterrey Epicure de Luxe, I noted that it didn't feel or taste like a typical Hoyo blend due to its strength, pepper and medium-full body. That holds true almost a year later, and if anything, this one sample shows the cigar might have even gotten a bit stronger. After the first inch or so, there is little to any nuance to the flavors, and if anything it seems to hide a lack of depth behind prominent pepper and char. I'm still optimistic that these will eventually turn into the refined, balanced and subtle Hoyo de Monterrey profile that I have come to know and generally love, but it will certainly require a good bit more time and patience to get there.