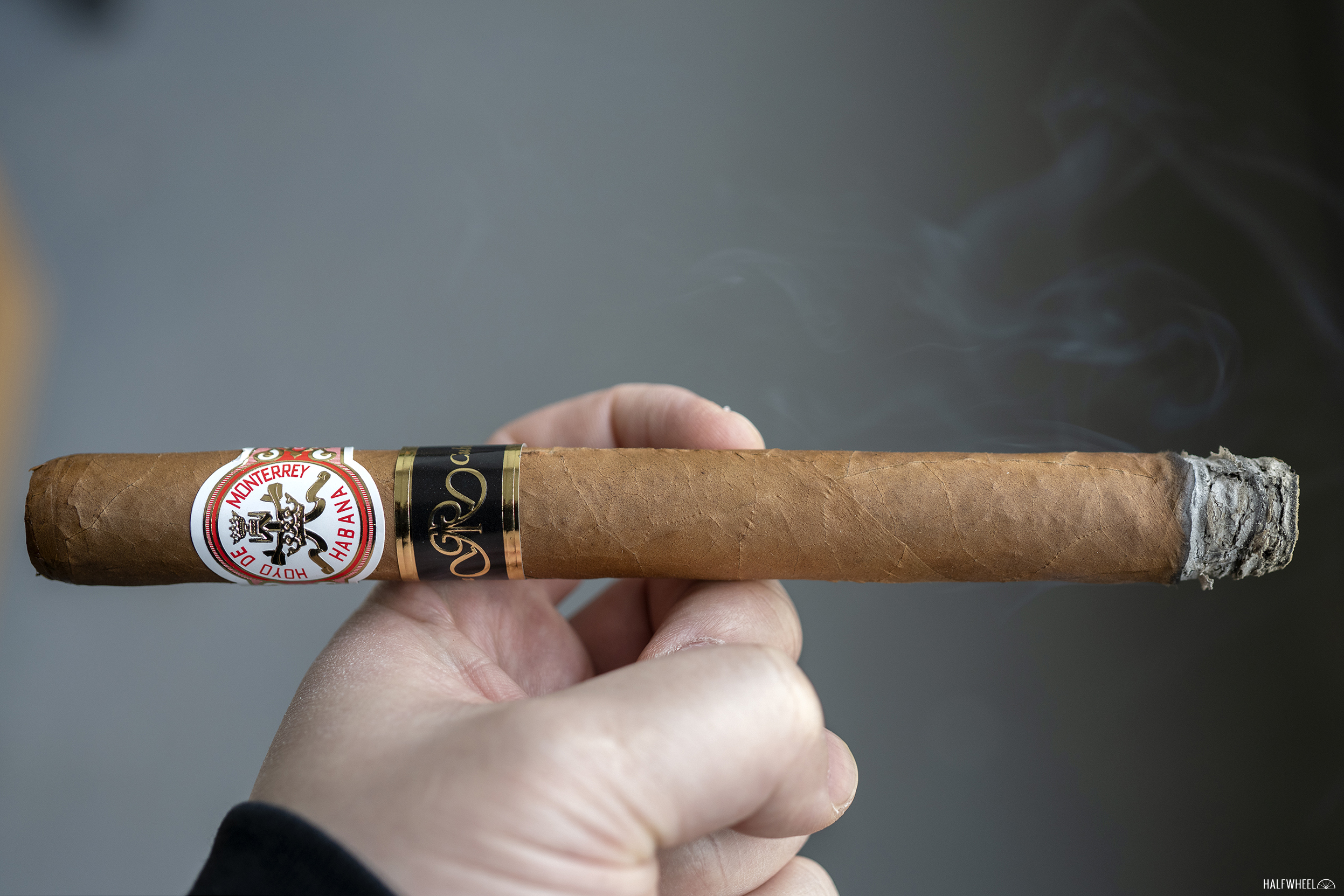 While there’s no way to guarantee you are going to get a good cigar—especially a Cuban cigar—for a long time, the closest you could get to a guarantee was by purchasing a cigar with a Reserva or Gran Reserva secondary band.

Those secondary bands—silver on black for Reservas and gold on black for Gran Reservas—designates that the cigar is part of Habanos S.A.’s Reserva/Gran Reserva program. Each year, Habanos S.A. selects one regular production cigar to be part of the program, which means the cigars use aged tobacco and are packaged in special boxes. Currently, an even year means Habanos S.A. will designate a Reserva whereas odd years means a Gran Reserva is chosen.

A Reserva means the tobacco was aged for at least three years, whereas the Gran Reservas used tobacco that is at least five-years-old. Currently, Reservas are packaged in boxes of 20, whereas Gran Reservas are packaged in boxes of 15 cigars. Officially, each release is limited to 5,000 boxes though there have been years when there were seemingly fewer cigars released than the 5,000 box number.

Up until the 2020 release, it was believed that the cigars chosen needed to come from Cohiba, H. Upmann, Hoyo de Monterrey, Montecristo, Partagás, Romeo y Julieta or, technically, José L. Piedra. Prior to 2020, Habanos S.A. divided its brands into various segments, these brands were known as “global brands,” though Habanos S.A. has since abandoned that brand classification. Furthermore, in 2020, Bolívar was selected as the Reserva release, putting an end to the global brand requirement.

While the Reserva program started in 2003—though the modern program really didn’t start until 2005—the Gran Reservas didn’t debut until 2009. There have been six cigars released and one more that has been announced but not yet released: 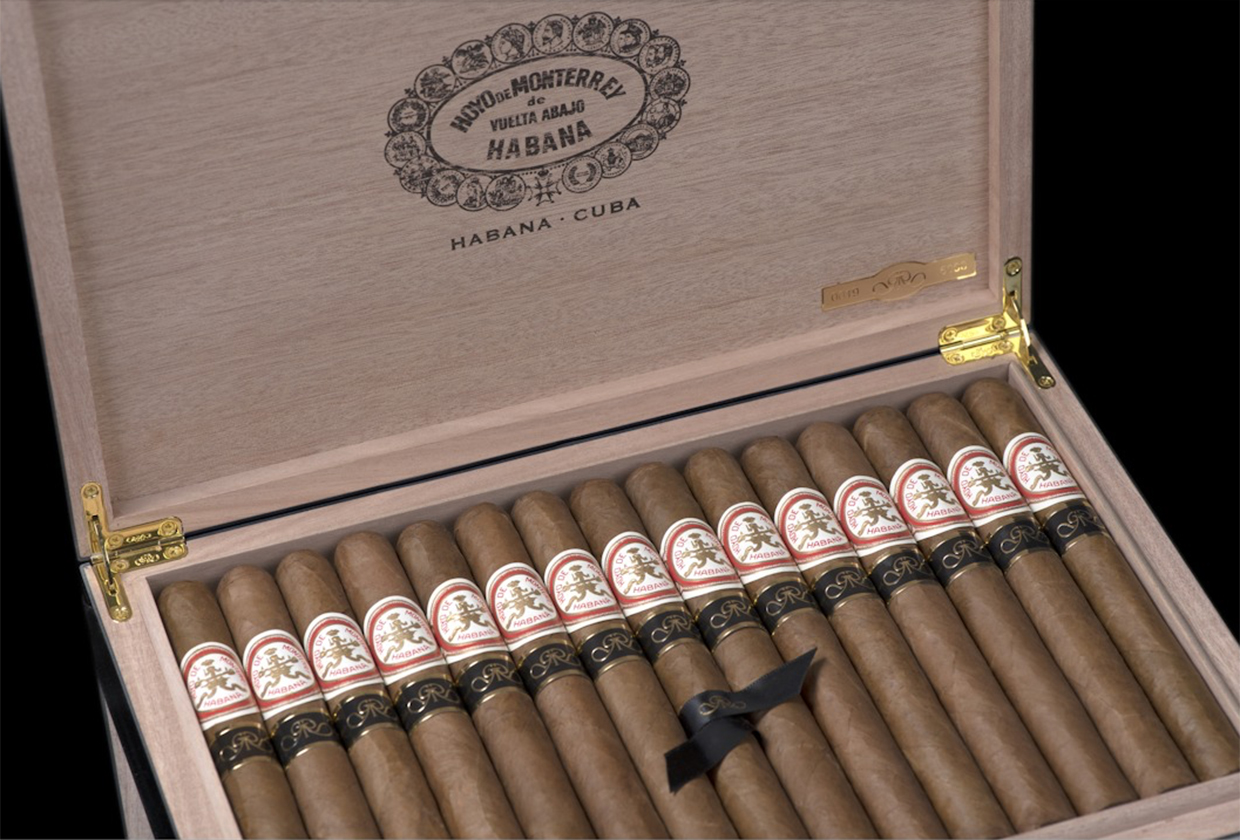 About a year ago, we had the opportunity to buy some of the Hoyo de Monterrey Double Corona Gran Reservas. Despite being asked to pay $200 per cigar, it wasn’t a tough choice given our annual Holy Grail Week. Also, trying to find someone willing to split up a box is tough and we didn’t need 15 cigars for this review.

If you are wondering about the name, cosecha is Spanish for harvest. The “Cosecha 2013” means that the tobacco used for this cigar was part of the 2013 crop.

Note: Since halfwheel launched in 2012, we have started off each new year with a week of reviews that are different from the other parts of the year. Rather than reviewing new cigars, we try to find cigars people might consider a holy grail cigar. These reviews are scored the same as our regular reviews, though oftentimes we are only able to procure one of the cigars, so many of these reviews are based on smoking one cigar instead of our normal three cigars per review. You can read more Holy Grail Week reviews by clicking here. — Charlie Minato. 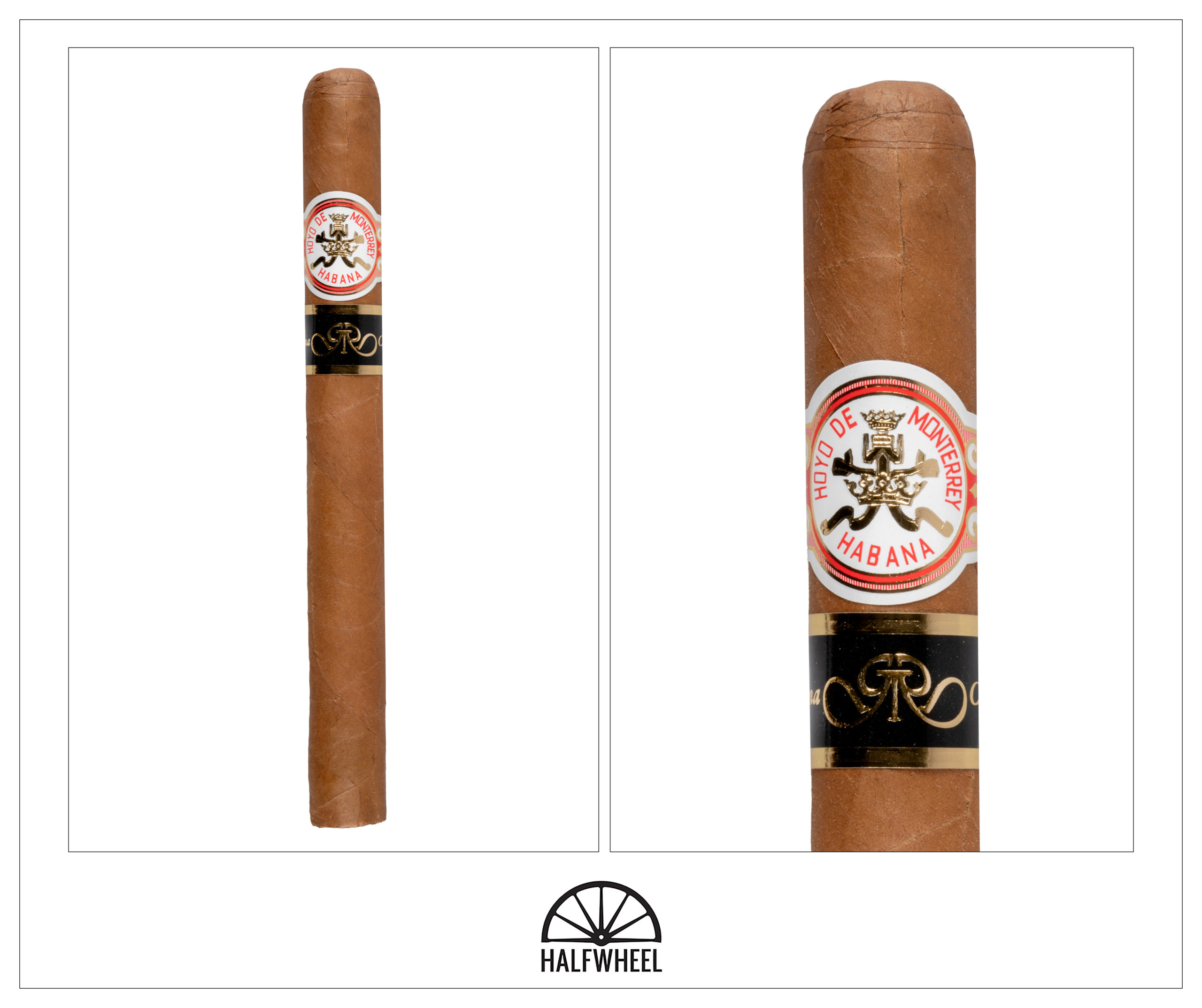 The two bands are very pretty and the triple cap is well-applied. That’s the good, but it’s not all pretty. The two cigars are not flawless from a visual standpoint. That’s largely due to the above average amount of larger veins, which can create an appearance that the wrapper was stitched together. For a typical Cuban cigar, this wouldn’t be all that notable, but given the Gran Reserva program, this is unexpected. These cigars have been sitting in a humidor for a year and I can’t pick up much beyond some acidity. The foot has a medium aroma with classic Cuban twang, some sweet ketchup and acidity that reminds me of the sweat in workout clothes. Cold draws have the sweet floral flavors and sugar that I describe as Cuban twang over some milder brown gravy flavors. While I enjoy the cold draw, I am somewhat disappointed there aren’t more flavors.

It’s chewy. The Hoyo de Monterrey Double Coronas Gran Reserva Cosecha 2013 starts with a list of flavors that is not exotic—woods, Lay’s potato chips, metallic, sweetness, hay—but the texture of the flavors is so chewy that it’s a remarkably different experience than most cigars. The chewiness and contrasting other textures also create a layered sensation that only a minority of cigars can have. About 10 minutes into the cigar, a chewy nuttiness leads the profile in the sense it’s both the strongest flavor I taste but also the one that hits my palate first. It’s followed by popcorn, a bread cracker that reminds me of the Chex Mix breadstick, some beef meatiness, unsweet floral flavors and some black pepper. The finish has popcorn, oak, black pepper, mild citrus sweetness and mild leather. Retrohales have a softer peanut butter flavor followed by pineapple sweetness, creaminess and a spicy white pepper. The finish has oatmeal, pine, leather, coffee, white pepper on the tongue and black pepper in the nose. Flavor is bouncing between medium-full and full, body is medium-full and strength is medium. There are many Cuban cigars that have construction issues, fortunately, the first third of this cigar is not one of them.

After a few false starts in the first third, the bread flavor joins the nuttiness as one of the now two leading flavors of the Hoyo de Monterrey. Like the nuttiness, the bread flavor has an incredible amount of chewy texture to it. There’s burnt espresso, burnt caramel, some sweetness, earthiness and white pepper as secondary flavors. Something in the profile is always changing, maybe a flavor adds itself or one flavor gets weaker. No two puffs are identical, though the hour or so I spend smoking through the second third is pretty homogenous all things considered. The finish has a unique nut mixture joined by a milky creaminess. The latter is an incredibly lifelike flavor, it really coats my mouth similar to if I had just finished a glass of milk. There’s also white pepper and some less burnt caramel. Retrohales have cedar over oak, damp woods, leather, brown butter, saltiness and dry fall leaves. As the transition to the finish happens, there’s some herbal flavors—oregano is the standout—that emerge, though for whatever it seems like those flavors are spatially further away. The finish has oak, leather, generic sweetness and some black pepper, the latter emerging as the cigar nears the final third. Flavor is full, body is medium-full and strength is medium. One cigar continues to perform flawlessly while another one sees the smoke production dip right around the halfway mark, causing a minor correction. 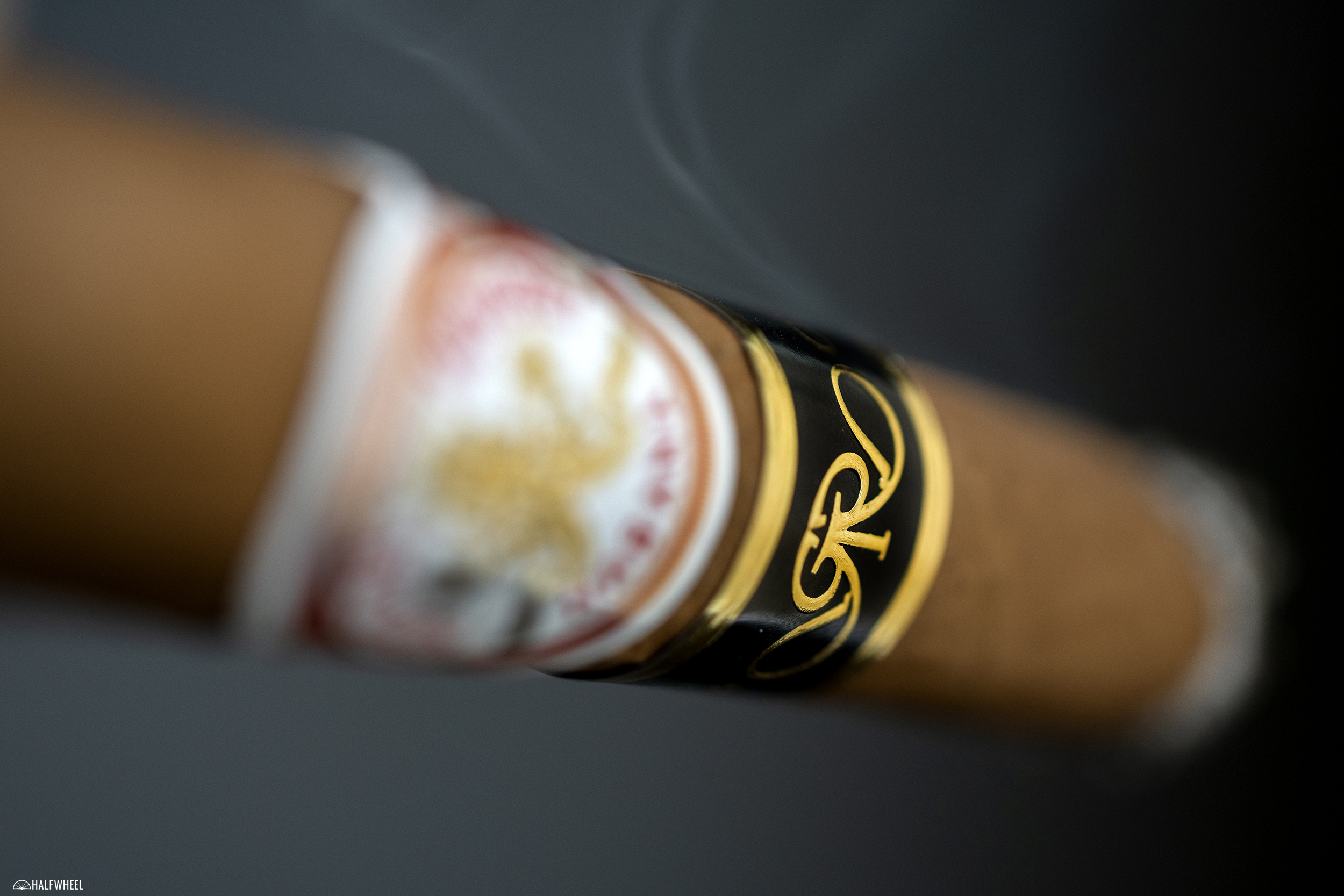 Given how smooth the first two thirds had been, pretty much any change would result in a rougher experience and that’s what happens during the final third of the Hoyo de Monterrey Double Coronas Gran Reserva Cosecha 2013. It’s not rough, but it is rougher, as lots of burnt popcorn flavors overtake the nuttiness as the strongest part of the profile. The burnt espresso sticks around and is joined by some tater tot-like fried potatoes. There are enough flavors and they are easy enough to identify that there’s a clear tertiary grouping of flavors that includes saltiness, brown rice, leather, white pepper and black pepper. The finish gets moderately toasty with sesame seed and burnt popcorn as the two stand-out flavors. There’s a mild white pepper, but the profile tastes spicy thanks to an added paprika. One cigar has a fair bit of mineral flavors during the finish, but the other cigar does not. Retrohales are surprisingly much brighter with citrus adding some extra life to other flavors. That list includes white pepper, a softer paprika flavor, gingerbread and liquid smoke. The finish has more properly cooked popcorn than burnt popcorn flavors over a mixture of bread and some beef-like meatiness. Flavor is full, body is medium-full and strength is medium. Construction is excellent on both cigars, meaning one of the two cigars made it from start to finish without a thought of a need to touch it up. 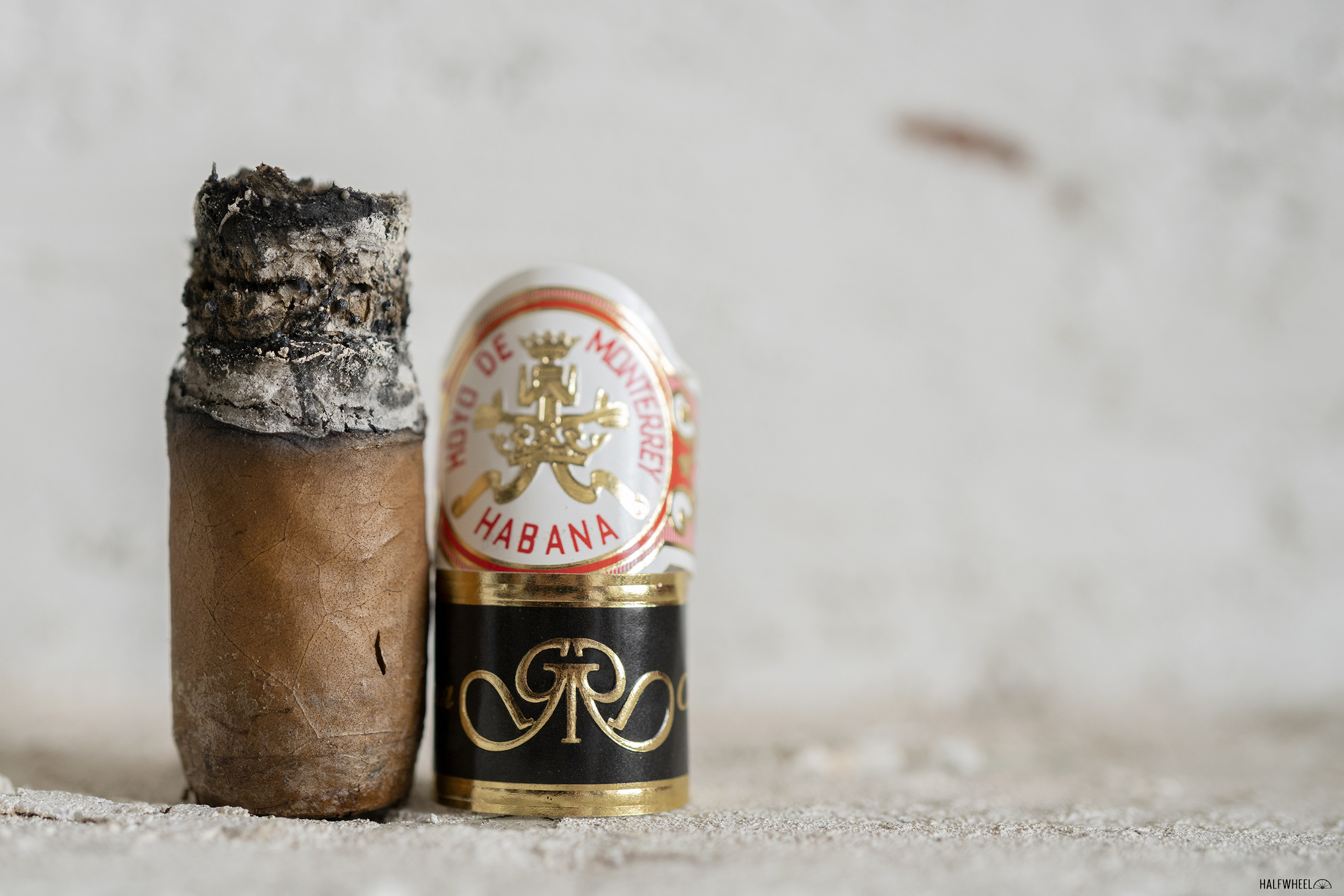 Being able to smoke not only one, but two of these cigars is an incredible privilege in the same way that eating an outstanding meal or witnessing a world-class pianist perform is. It's important to know that cigars like this exist. It's important to know that there are levels. The Hoyo de Monterrey Double Coronas Gran Reserva Cosecha 2013 gives me an appreciation not only for its excellence but also a better understanding of the cigars that don't quite get to this elite level. But this is not a cigar I could smoke every day. It's a bit large, it's very expensive, but more importantly, it's too good. If this were an everyday cigar, it would be difficult to find much pleasure from 98 percent of the other cigars in the world. Perhaps you want to live a life of that luxury, but for me, I'd rather explore it a bit more. However, cigars like this are exactly why we do holy grail week. Most importantly cigars like this remind me that it's important to smoke those grails and give them a chance to live up to your expectations, but equally important, a chance to fail. Without completing the exercise, what's the point of building the pedestal for a holy grail?