Last month, in addition to announcing a trio of cigars and a name change, Lost&Found—formerly Impromptu and later Bellatto / Caldwell / Sears—released another cigar, Holy Braille.

The concept of Lost&Found is actually fairly simple, although it seems to have garnered a fair bit of intrigue and even confusion. Robert Caldwell of Caldwell Cigar Co. purchases cigars that were originally created for someone else and presumably some other purpose from various factories. Jaclyn Sears, also of Caldwell Cigar Co., creates the artwork for the cigars and Tony Bellatto of La Barba Cigars handles the selling of said cigars.

These releases are relatively small in quantity—Holy Braille is limited to 999 cigars—and released without many details. In this particular case, all that was disclosed was that the 5 x 50 robusto uses an Ecuadorian habano wrapper. Lost&Found targets a certain sect of the online cigar market, specifically, more personalized retailers that seem more interested in newer and smaller brands as opposed to selling volumes of lower cost cigars.

Holy Braille is based off the Jay Z and Justin Timberlake song, “Holy Grail.” The soft-pack contains the following message:

The “And baby…” line is part of the lyrics for the song.

Holy Braille was one of four cigars that Lost&Found shipped last month. On wrapper looks alone, I would not be surprised if you had told me this was a Cuban cigar. While there’s no hints from the smell of the cigar, or the cold draw, there’s a few prominent veins and a very cylindrical roll. It’s quite smooth to the touch and I find some fruits, leather, mahogany and floral flavors. From the cold draw I get a dry floral flavor, some popcorn and floral on the back end.

Holy Braille starts out with a lot of unpleasant cedar surrounding the floral flavors. There’s some burnt citrus 15 seconds in and a very mild pepper follows. While it’s fairly mild to begin with, the flavors that are there are quite developed. The floral flavor decreases and the cedar increases and gets much more pleasant. What’s left behind is some sweeter citrus, mild coffee bean and some paprika. While the flavors increase in intensity, it doesn’t get to even the midway point of medium. Strength is also medium, but the body is mild, which creates an interesting dynamic. A charred orange peel begins to become a prominent part of the still cedar-dominated profile. Underneath it is a sourness, nuttiness and a lot of charred flavors. On the finish there’s a familiar floral sensation and burnt bell pepper. The mouth and nose do a great job of separating themselves with cedar on the mouth and pretty much everything else through the nose. Strength picks up a little bit, but still stays medium—other than that, there’s not a myriad of changes. I am required to touch up both cigars in the second third. 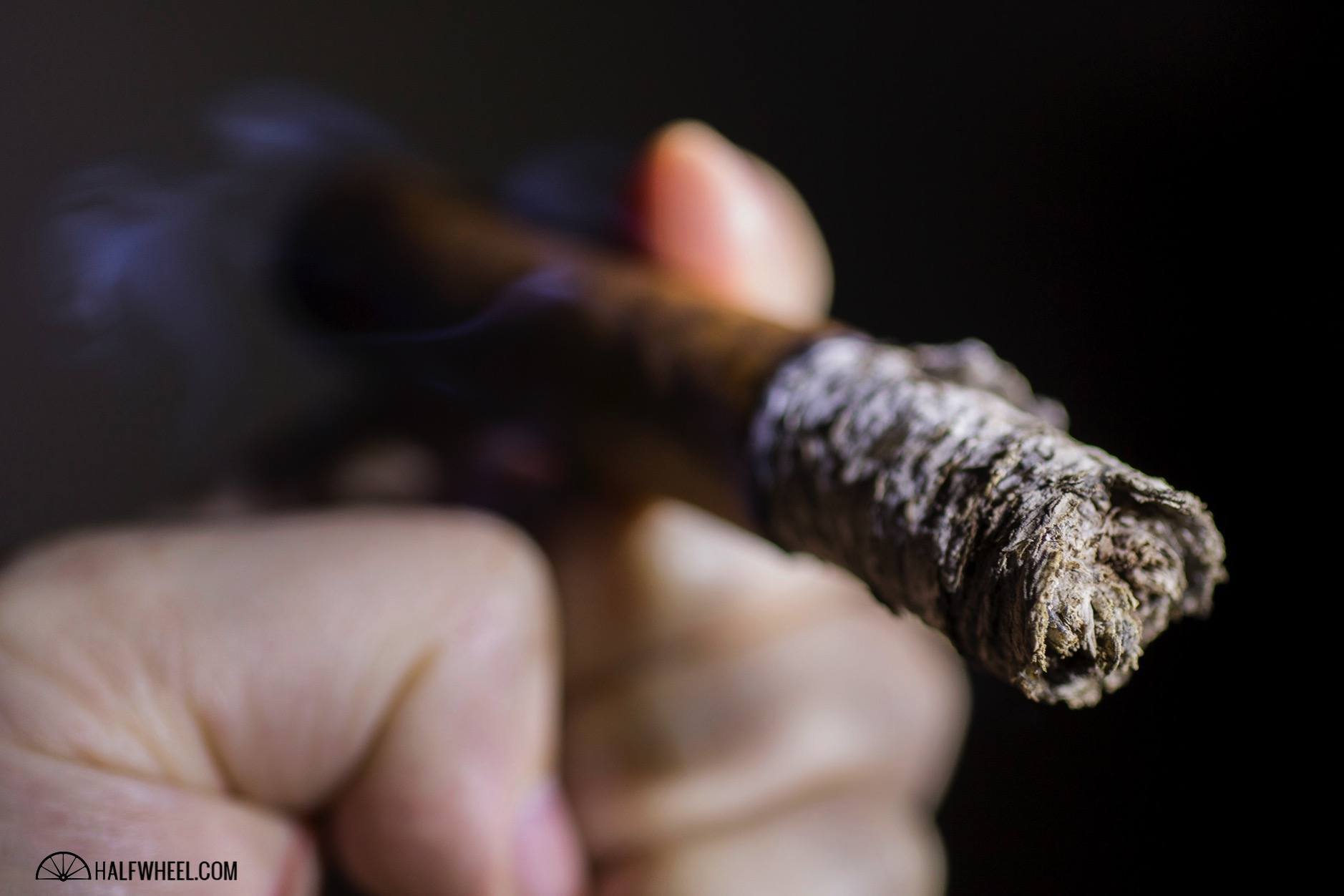 Hickory barbecue had been part of the aroma particularly in the second third, but now it becomes a prominent feature of the mouth. Sweet charred orange flavors continue to exist through the nose, popcorn also becomes a much larger part of the cigar, but there’s also some unpleasantness starting to develop in the Holy Braille, specifically a grass and spice mixture on the back of the tongue. Towards the last few puffs, there’s also some saltiness that emerges. I liked this cigar, a lot more than the score below implies. It was penalized for its issues on needing to be touched-up a few times over two samples, something that isn’t common on most the cigars I smoke for a review. I’d smoke another one, although I’ll be the first one to admit that at $15, I probably wouldn’t be in a rush for hoarding whatever of the 997 cigars remain. Lost&Found is a great concept, it’s just unfortunately expensive.