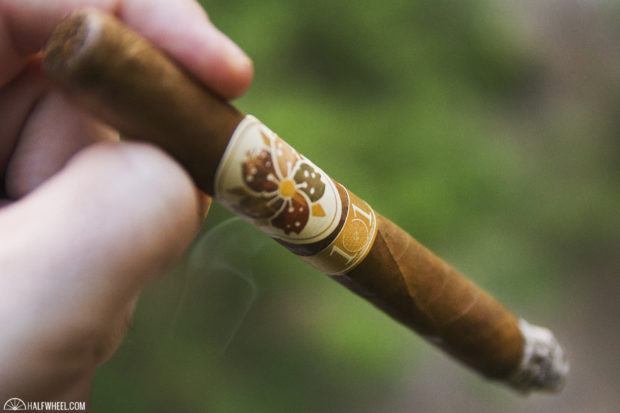 Matt Booth did both this year.

In January 2017, Booth announced that he was parting ways with Davidoff of Geneva USA, effectively bringing an end to his Room101 line of cigars, though the cigars would stay on the market as inventory was sold through. Booth decided not to renew his contract with the company that had produced and distributed his cigars since he entered the cigar business in 2009 by way of a partnership with Camacho, who while having been sold to Davidoff was still operating independently.

The announcement came with the words retire and depart the industry, making it seem that he might be out altogether, returning to focus on the jewelry company he launched in 2003.

Then in early July, Matt Booth came back.

He hadn’t signed a new deal to bring his Room101 lines back to the market, or found a new factory for his cigars, but instead would be collaborating with Robert Caldwell of Caldwell Cigar Co. on two new cigars, Hit & Run, and a second that was originally called The Truth but that has since become nameless due to a trademark issue. 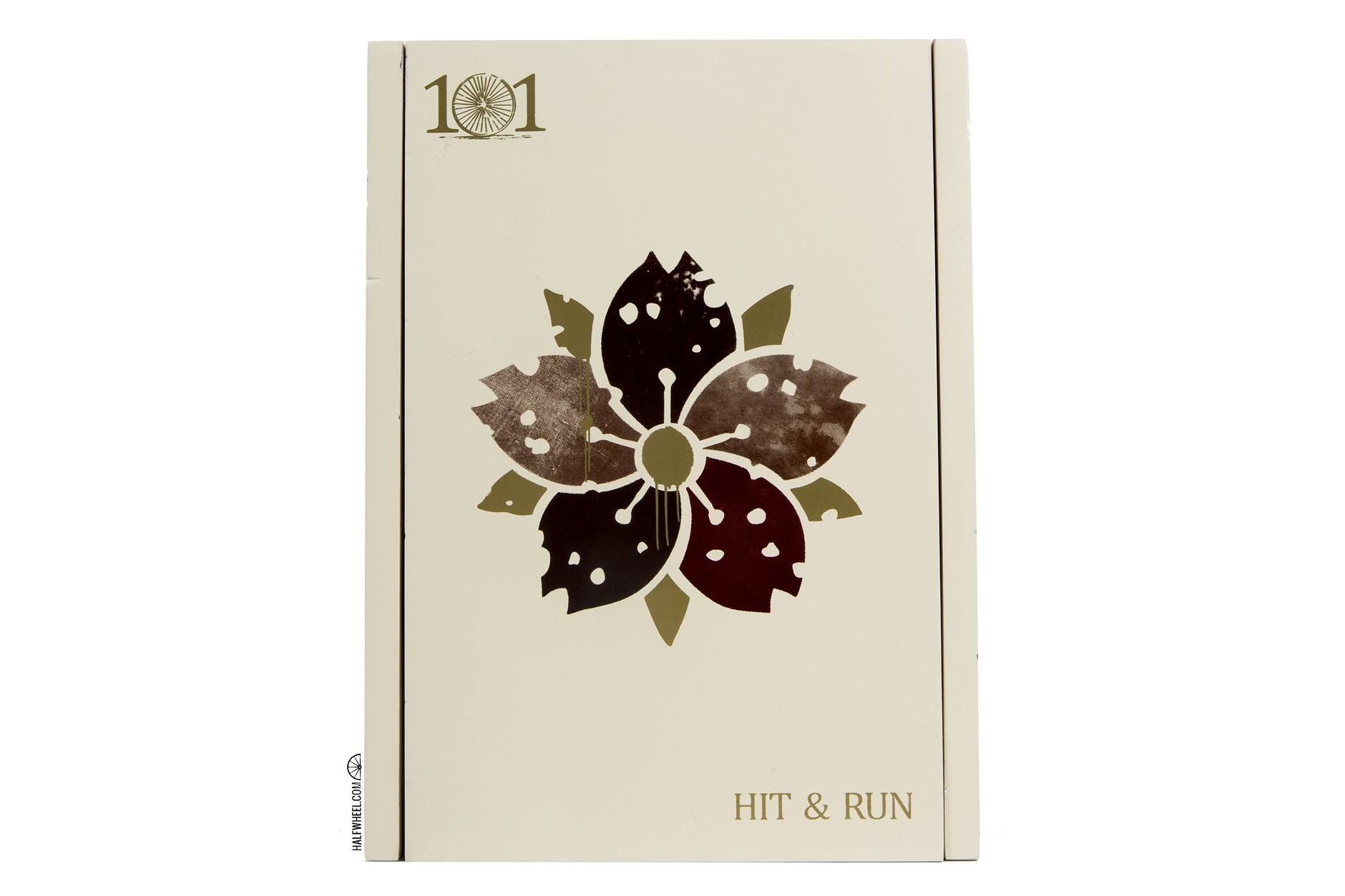 Hit & Run is a project that comes out of a factory that is very familiar to Caldwell, Tabacalera William Ventura. The project uses an Ecuadorian habano wrapper, Indonesian binder, and Dominican fillers, with the blend offered in five sizes:

Or so we thought. While not announced as part of the original batch of sizes, the Cannon was added as a limited edition, a lengthy 10 x 45 giant corona of which there are just 101 boxes of 10 cigars being produced. 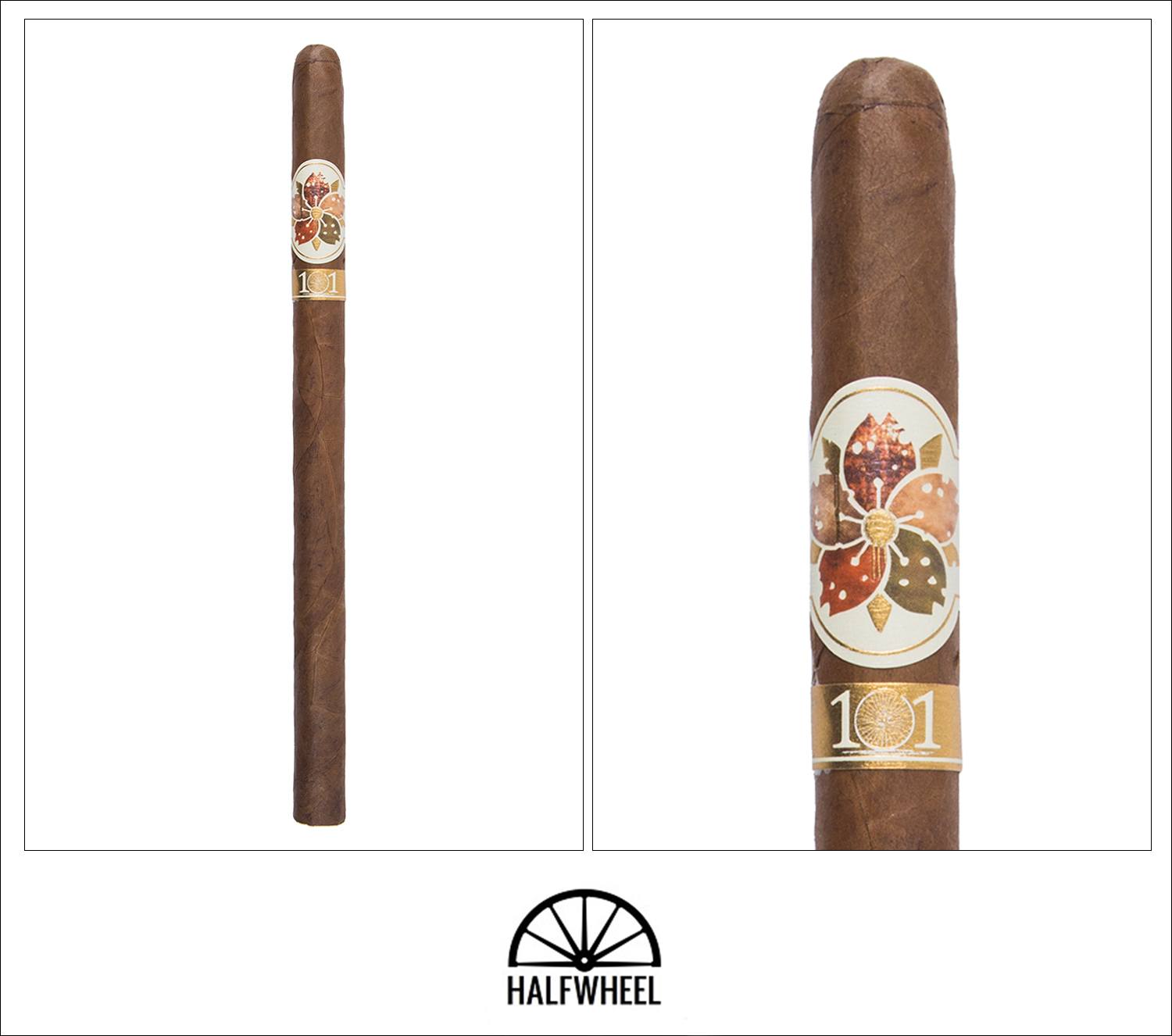 The Hit & Run Cannon is certainly a sight, impressive on its own as a finished cigar but more so if you understand the challenges that go into creating such a vitola, from finding a properly sized wrapper leaf to ensuring that the bunch draws properly. The capa is a tanned toffee color, generally even but variations are noticeable at the seams. There’s no shortage of veins, though most are small to medium-sized and hardly intrusive. The cigar has some give but is generally on the firm side, with flat seams and an impressive roll for a cigar of any size, let alone one 10 inches long. The foot offers a light and bright aroma of white breads, banana, and some hints at floral notes; the combination has me thinking Champagne at first but without the crispness or bubbly nose. The cold draw is just a touch tight, though it may be more due to the cigar’s length and how a bit more effort is needed to move air in this longer cylinder. The flavors are decidedly more bread-driven, with a basket’s mixture of white and wheat notes. There’s a bit of graham cracker sweetness lingering in the back as well, while some sweet chili pepper sauce appears on the tip of the tongue in select samples.

I’m impressed by the smooth and easy draw of the Hit & Run Cannon once it is lit, with the smoke a bit creamy, a bit peppery, and still showing some of the bread and graham cracker notes, though in a much less pronounced manner. The appearance of dry woods is dependent on the sample, as is the specific amount of pepper in the first dozen puffs. An almond flavor enters shortly thereafter, while some sweetness seems to be developing but isn’t quite ready to step forward, yet the result is still complex and delectable. The first clump of ash breaks off at just about an inch in length, though it does little to make the cigar appear much shorter. Retrohales in the first third are quite pleasant, with some pronounced but refined pepper balanced by a bit of thick cream. As the second clump of ash builds, the profile gets a bit more robust by way of more pepper and the introduction of some gritty, loamy earth. The draw remains quite good in this section, while the ash suddenly becomes much more flaky and delicate than I would like, ending up seemingly everywhere except the ashtray. With the second third on the horizon, the cigar smooths out a bit, less gritty than it was seemingly just a few moments ago yet not quite as smooth as at the start. It still pairs with retrohales, which I find myself enjoying. Almonds and pepper now are at the front of the profile on the tongue, while the pepper gets more complex through the nose with a mix of both white and black pepper that result in a bright, lingering tingle as well as some heavier punch. Both body and flavor have been medium to near medium-full, the latter a tick more than the former. 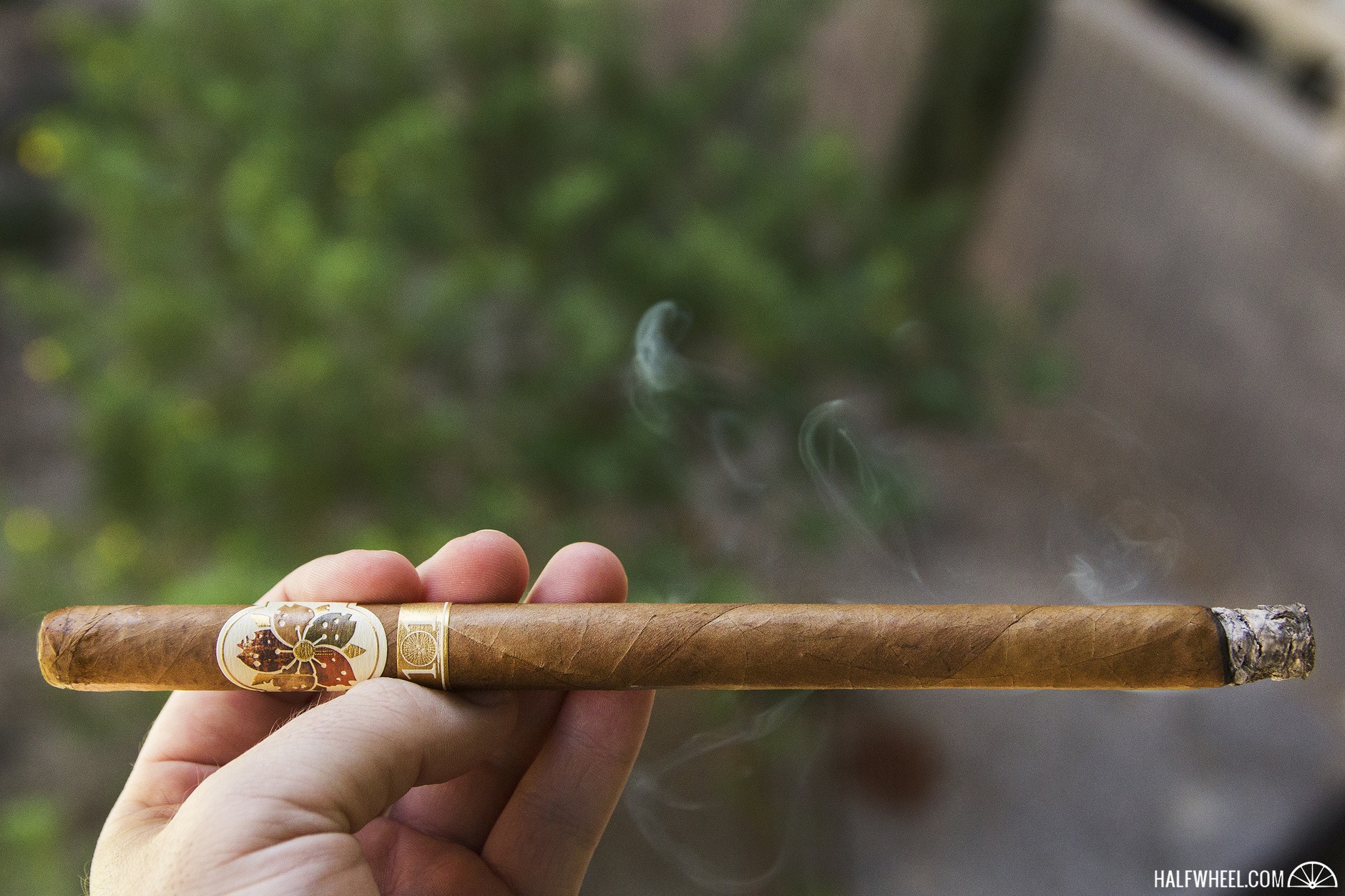 The second third of the Hit & Run Cannon starts by pivoting off the almond note to more of a mixed nuts flavor, thankfully with no salt. While the base notes aren’t as gritty as they were earlier, they are back to being on the heavier side and now there is a bit of dampness to the soil component. Retrohales are a good bit toastier as well, an attribute that occasionally makes its way to the palate, with the notes of the smoke on the palate complementing those through the nose quite well. The flow of flavors varies from sample to sample, as in the second cigar I’m getting the complexity I found at the end of the first sample’s first third, but regardless of where it shows up it is understated and easy on the palate, highlighted by touches of espresso crema, almond milk, and more mixed nuts. White pepper begins to build in the nose past the midway point, adding brightness and physical sensation to the mix, the latter of which is back from a brief hiatus. As the cigar eyes its final third, the draw opens up a bit and smoke production subsequently increases, with pepper still leading the way, backed by toast, cedar, and a first twinge of sourness. 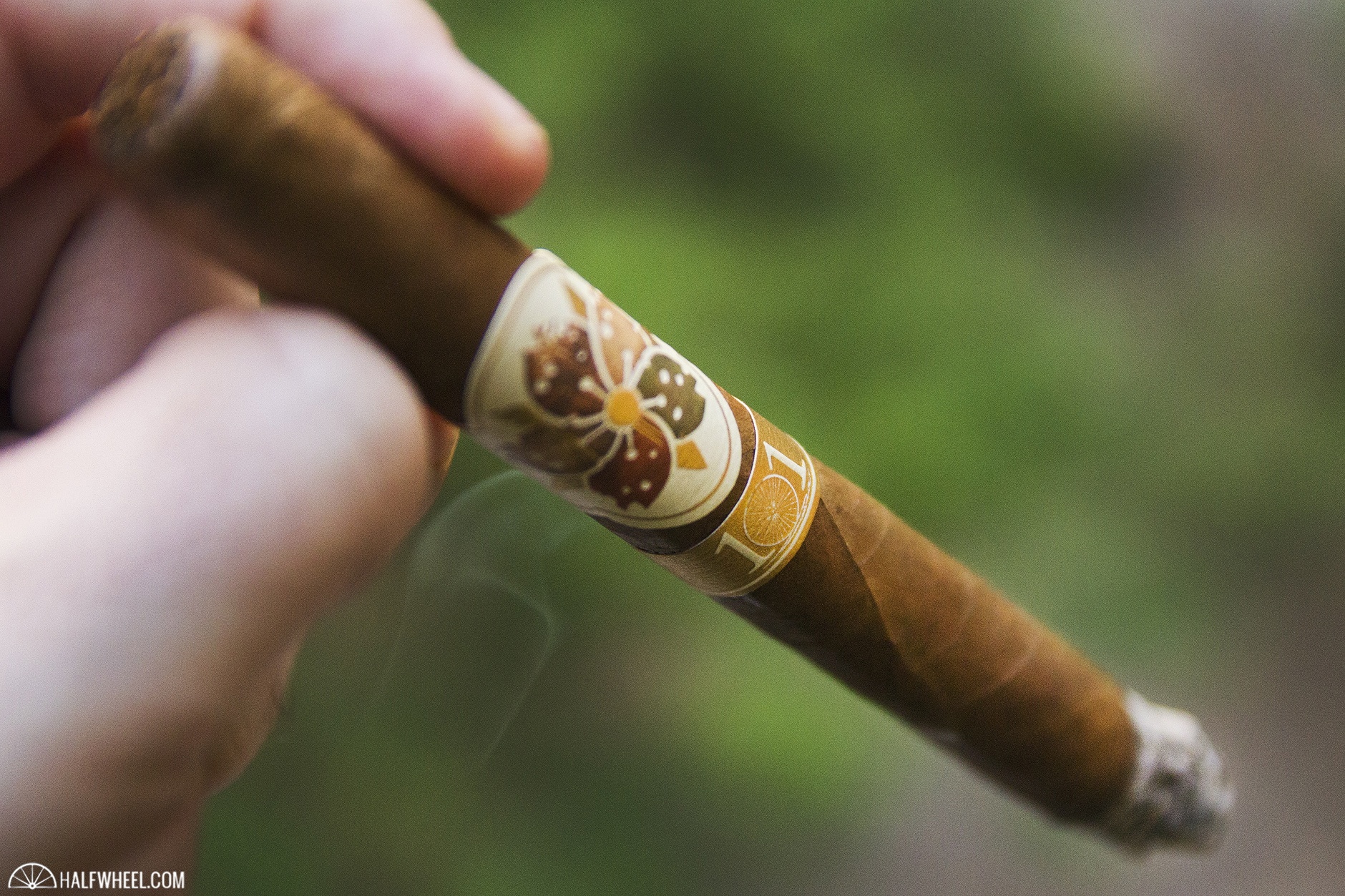 The start of the final third sees a fairly pronounced shifting of flavors, as the pepper suddenly gets a bit more assertive despite not increasing in quantity or dominance, while the overall profile can get a bit harsh towards the back of the throat. Ever flavor up to this point now has a bit of char on it, with the aroma picking up a decidedly peppery campfire quality. One flavor free of char is a dry wood note that goes after the taste buds in the front half of the tongue and keeps them tingling long after an exhale. The nicotine kick from the cigar also seems to ramp up rather quickly; whether it’s newfound or simply the accumulation from nearly three hours of smoking time so far, it really begins to be felt as the bands need to be taken off. The burn stays near flawless, while the flavor can’t seem to shake the charred notes it has picked up, and in the final inches a bit of heat comes in to further complicate matters. White pepper soaks the front half of the tongue to bring the Hit & Run Cannon to its conclusion. 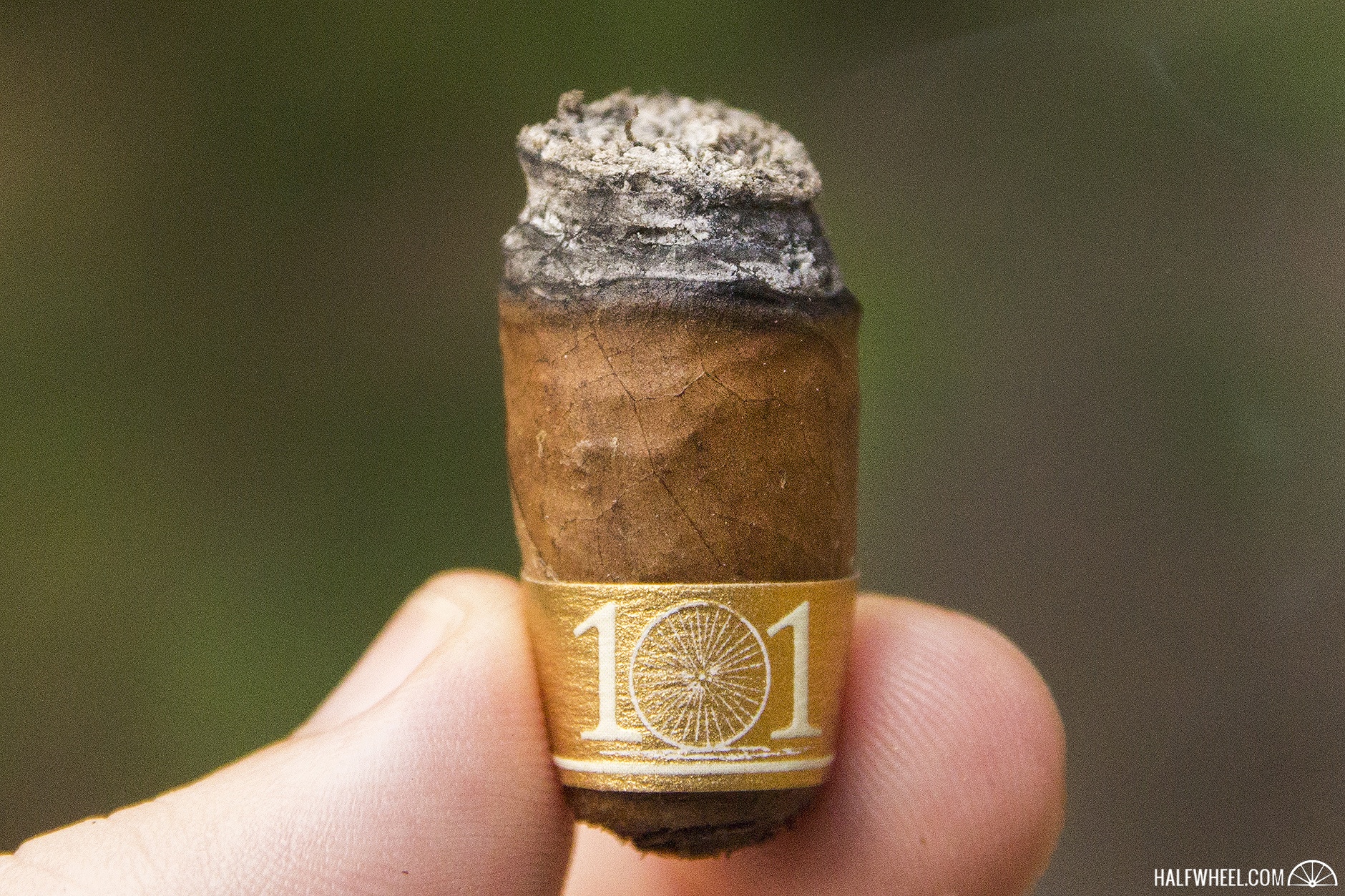 A 10-inch cigar comes with some stereotypes, the first of which is most likely that it’s a novelty. While the length of the Hit & Run Cannon may be a bit gimmicky, everything else about the cigar is top-notch. The flavor in the first two thirds is great to exemplary, offering nearly seven inches of box-worthy flavors and complexity. The final third in each sample performed the exact same way, picking up significant notes of char that throw the Hit & Run blend off course but not completely off the rails. Consider me impressed by the execution of this giant corona, and more than intrigued to try the other sizes in the line.