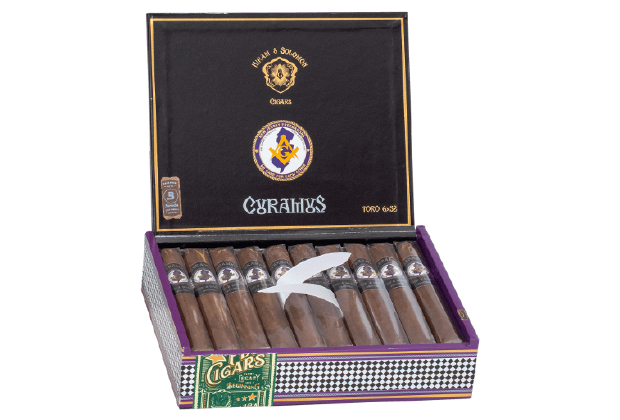 Hiram & Solomon has released its newest cigar, Curamus, a limited edition cigar that the company specially crafted for MW Robert V. Monacelli, Grand Master of the Most Ancient and Honorable Society of Freemasons for the State of New Jersey.

The Curamus is a 6 x 52 toro that uses a Pennsylvania broadleaf wrapper, a Mexican-grown binder and a filler that includes Dominican corojo seco and ligero, Dominican criollo ligero, and Pennsylvania broadleaf. It has an MSRP of $10 per cigar before taxes and is offered in 20-count boxes that contain a Boveda pack for freshness during transportation, the first time that the company has included the humidification pack.

“Our latest addition to the company’s portfolio is named Curamus, a Latin word which translates to ‘We Care’, a simple, yet important mantra for Freemasons,” said Fouad Kashouty, owner of Hiram & Solomon. “Like those that preceded them, Curamus will follow in the tradition of giving as noted in a letter from the MW Grand Master, which states a portion of the proceeds will go to the White Flower Society and the Almoner’s Fund for the Scottish Rite of the Northern Masonic Jurisdiction.”

The Hiram & Solomon Curamus is made at PDR Cigars in Tamboril, Dominican Republic, and is the first time that the company and factory have worked together to produce a cigar. Production is limited to 450 boxes and is currently available via the brand’s website but will be released to retailers in the near future.