There is no product that receives more universal praise from the members of halfwheel than Boveda.

It’s not because people from Minnesota are nice, though they do seem nicer, but rather, because the product Boveda makes—which is actually produced in Wisconsin—just works.

There’s also probably no product in the cigar market that has the sort of monopoly Boveda has. While it makes a variety of sizes and the applications are different, the company’s main product—a rectangular 5 1/2 x 3 1/2 inch brown pouch that humidifies cigars—has had no direct competitor, at least up until last year.

At the 2015 IPCPR Convention & Trade Show, HF Barcelona—a Spanish accessory company—privately showed off a new humidification product that was roughly the same size as the larger Boveda packs and promised similar results. Eventually, the company released its product, the Gelly, in three different configurations: Gelly30, Gelly60 and a bag with the humidity element built in. The Gelly is a bit larger than a large Boveda measuring 6 3/4 inches wide by 4 inches long. Both companies sell their units in a 60 gram variety, and for whatever it’s worth, both actually weigh between 63-64 grams, though the unopened Boveda has a bit of plastic around it which might lead to the added weight.

As for the HF Barcelona Gelly, it features two openings, covered by silver stickers that you peel off to allow the humidification to leave the bag. Each sticker hides 12 small circles below it where the moisture is released. In addition, the pouch features a small white circle that will display one of four colors based on to what the relative humidity is in the container it’s placed in, something Boveda doesn’t have. The humidity monitor—which is divided into 20, 40, 60 and 70 percent relative humidity levels—seems to work well as a non-scientific measuring device. It turned blue after I placed one unit in the fridge and then turned back to the pink color after being placed in a humidor. It won’t however tell you if the humidity is simply at 70 or above 70 and there’s no way of knowing how much above 70 it is, something that unfortunately is a relevant part to this review.

HF Barcelona describes the Gelly as “a mixture of propylene glycol and gel crystals.” Propylene glycol, oftentimes sold under a premixed solution, is used to help slow down the evaporation of water and prevent mold. It’s most commonly used in association with the green florists’ foam found for years in humidors, but also is used with XIKAR’s Crystal line of products. In fact XIKAR’s Crystal products are a pretty good insight into how the Gelly works.

The Gelly appears to use a combination of super absorbent polymers—something different than silicone beads from companies like Heartfelt—treated with propylene glycol. When dry, super absorbent polymers look like small chunks of sea salt, however, once they come in contact with water they expand to roughly 50 times their size before releasing the moisture into the environment around it and eventually shrinking back down to their original size. In the case of the HF Barcelona Gelly, it appears—after opening the unit up—the polymers are pre-soaked and then placed into a plastic pouch, which is similar to how XIKAR’s products are sold, i.e. treated and pre-soaked. (Above a Boveda and the Gelly60)

For those wondering, Boveda uses what is basically a glorified salt test inside some special paper. Boveda mixes a certain amount of salt—to achieve a specific relative humidity—with water and a proprietary gumming agent. That mixture is placed inside a permeable paper pouch. The Boveda functions as a regulator: if the humidity in the container is above the specific number it removes the excess humidity and the pouch gets bigger; if the humidity is lower on the outside than the preset number, the Boveda releases extra humidity. This is the two-way humidification element that Boveda uses as its biggest selling point. (Above a dried out Boveda and the Gelly60)

Super absorbent polymers are a great alternative to large amounts of still water and that’s why companies like Cigar Oasis have begun to use them—in place of having container full of water—in their larger electronic humidifiers. The reason as to why they are ideal for that application is because you can reduce the risk of mold and spilling while still having a similar effect to a fan blowing on a big bed of water. You still have a highly effective concentration of surface area that is releasing upwards of 99 percent relative humidity, but without some of the mess.

But that’s sort of the problem: super absorbent polymers by their very nature release a ton of moisture. That’s why propylene glycol is used to help slow down the rate of evaporation, unfortunately, HF Barcelona doesn’t appear to have figured out the ideal ratio.

When I first began testing the unit I did what I do with most humidification products. I placed it in a sealed container with a hygrometer to see if it would release the desired levels of humidity.

After around 24 hours inside said sealed container, I came back to see a hygrometer reading north of 85 percent relative humidity, something that should be of great concern to cigar smokers.

Now, that Gelly was given to me during one of the cigar festivals earlier in the year, so I was at least willing to give it a pass because maybe being stored in high temperatures had screwed up that particular pouch.

So I bought five more and began testing those. 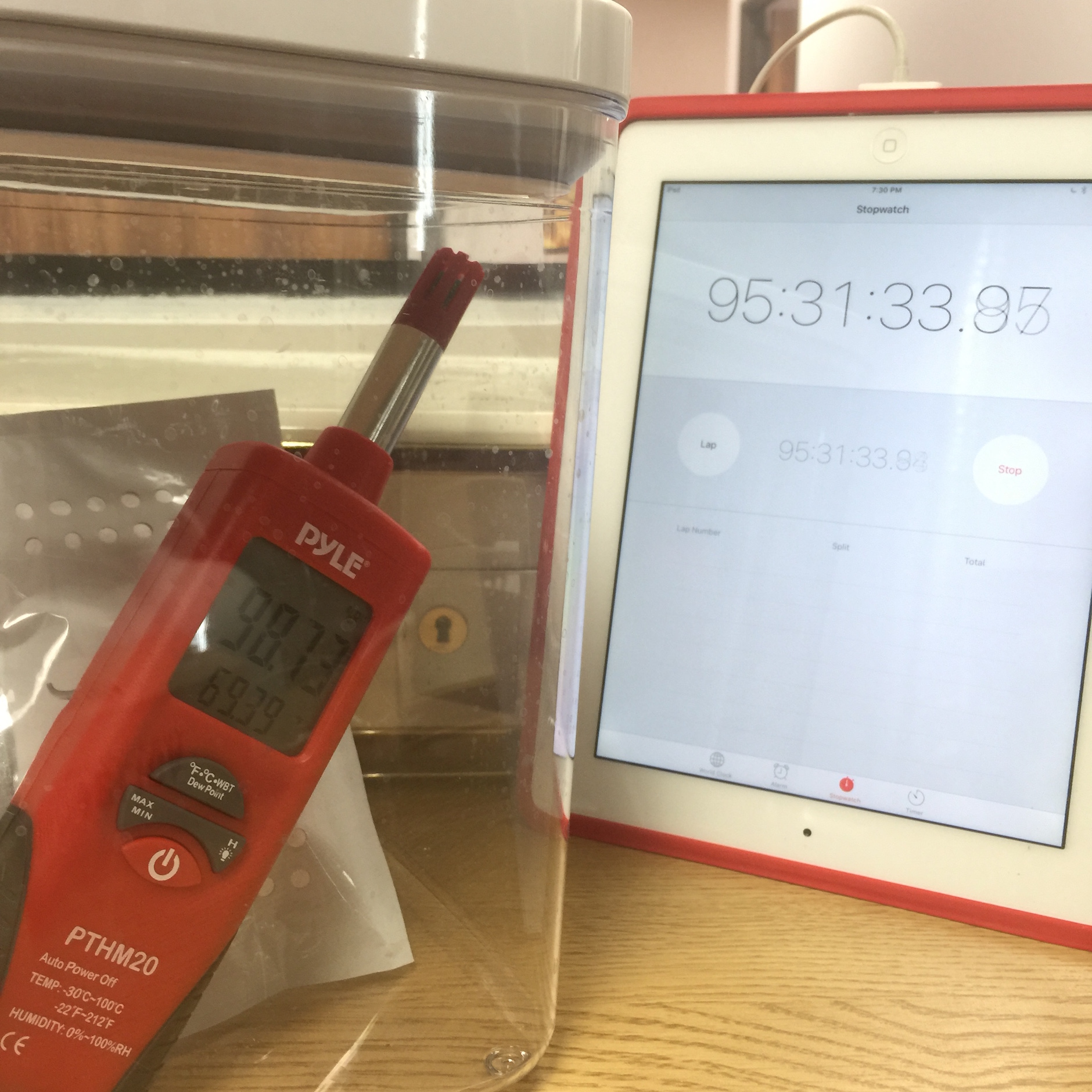 Even 80 percent relative humidity opens a cigar smoker up to a host of problems. Oils will start to escape the cigars at rapid rates, decreasing flavor. The cigars will have too much internal moisture creating issues with keeping a cigar lit. After a while the added moisture will force the tobacco to expand substantially, potentially causing cracks in the wrapper and binder. Finally, excessive moisture will lead to mold on cigars. Temperature plays a role in this too, but ultimately, if you keep your cigars at 80 percent relative humidity for six months, you probably aren’t going to like the results, though they will be colorful in a Jackson Pollock sort of way: mold, broken wrapper, tobacco shards and potentially tears, both rips and crying.

HF Barcelona’s website states the Gelly is supposed to keep the cigars at “optimum humidity tobacco conditions (68 – 72%).” In weeks of testing multiple units, I never saw anything that was below 80 percent relative humidity after 24 hours once the Gelly was open.

At the time I didn’t know the Gelly was using super absorbent polymers, but once I cut open one pouch, I immediately realized the problem. Super absorbent polymers will put off a ton of moisture and if you don’t use enough propylene glycol, you will have far more than the typical 70 percent relative humidity most cigar smokers want.

I never placed the Gelly into a humidor—large or small—and that’s unfortunate for a lot of reasons. I think Boveda makes a great product, one that, outside of cost I could complain very little about. But that doesn’t mean it cannot be improved and competition would force Boveda to be better. The Gelly might be marketed as competition, but when it comes to function, it’s only capable of competing with Boveda’s humidor seasoning pouch (84 percent) and even then it may be too wet. It’s certainly not something I feel comfortable placing with my cigars.

After finishing testing and the first draft of this review, I called up Miami Cigar & Co., which distributes HF Barcelona in the U.S., and asked two questions: A. Had they heard of anyone having similar experiences? B. Was I using this wrong?

The first person I spoke with told me no to both questions, but Jason Wood, vp of Miami Cigar & Co., told me that the silver strips that are removed to start using the product should be placed back on the pouch if it gets too humid. I never got to test this because my strips have been thrown away, but my guess is this would totally stop any humidity from leaving the pouch, which would help lower the humidity, particularly if you let some ambient air in and aren’t living on a tropical island.

Even if that’s the way the Gelly is intended to be used, I still have three larger issues with that solution.

First, it means not only that you need to have an actual hygrometer, but also that you need to be checking the unit regularly, probably close to daily. It also means that you might need to be constantly fiddling with the Gelly. For travel humidors, where hygrometers are rarely seen, or long-term storage solutions, the Gelly suddenly stops being an option.

Two—there’s no indication that the strips are supposed to be used like this. I’ve known about this product for over a year and this was the first time I’ve ever heard anything about resealing. There’s no mention of it on the packaging itself, there’s no mention on the website and I certainly haven’t seen it described in any product descriptions from the retailers selling it.

Finally, this doesn’t change the fact of how the Gelly actually performs. It’s a zero—when the holes are completely closed—to 100—if the unit is left open for four days—solution. That works fine for something like an electronic humidifier that automatically shuts off once it reaches a certain level, however the Gelly requires the user to not only perform the monitoring, but also the maintenance. It doesn’t help that the built-in humidity gauge doesn’t tell you how much over 70 percent RH because that’s where notification is really needed. And so we end back where we started. Why—unless of course you don’t like people from Minnesota—would you not just use a Boveda? It removes the need, space and added costs of having a hygrometer. It removes the activity of checking your hygrometer to see if your Gelly is putting out too much humidity, covering your Gelly back up and then waiting to see when the humidity has dropped to the right level, and then of course going back to see when you need to open the Gelly back up and repeating the process indefinitely. It also removes the Gelly’s fatal flaw, which is that if you—the user—forget or choose not to do these things regularly, the Gelly’s over humidification tendency seems almost guaranteed to damage your cigars over time. I won’t put one next to my cigars and I wouldn’t recommend anyone else doing it either.

One unit used for this review was provided as part of the bags given to attendees of the Puro Sabor and Procigar festivals. halfwheel purchased five additional units for testing.