Every week I seem to find out that there is some phrase or quote that I’ve repeated countless times but have been wrongly attributing it all my life.

As it turns out, “survival of the fittest” is not a quote from Charles Darwin, but rather the late Herbert Spencer, an English philosopher and scientist. He coined the term after reading Darwin’s On the Origin of Species and took some of the theories to an extreme. It and other writings gained him immense popularity at the time, but not long-term relevance as summed up by Steven Shapin in The New Yorker:

Spencer was, arguably, the single most influential systematic thinker of the nineteenth century, but his influence, compared with that of Darwin, Marx, or Mill, was short-lived. In 1937, the Harvard sociologist Talcott Parsons asked, “Who now reads Spencer?”

Since neither you nor I came here for my thoughts on philosophy, it seems wise to explain why Spencer is being brought up. It’s thanks to Jake Wyatt Cigar Co., a new project from Neil Garcia and Gerard Abajian. The latter is part of the family behind Mardo Cigars which has locations in Laguna Niguel, Calif. and Sarasota, Fla.

Jake Wyatt Cigar Co. launched in February 2020 with six lines, all of which feature a more interesting cigar wrapper than you typically see. Every cigar in the company’s portfolio uses an artistic design that encompasses different types of tobacco. That ranges from a classic barberpole to this striped design that is seen on most of the company’s line. Given the factory that’s making the cigars—Tabacalera JVM in the Dominican Republic—this should be of little surprise, as it is most famous for the playful designs on Marrero Cigars offerings such as the Aquatico 45 which featured different types of animals that live in water on its wrapper.

The Herbert Spencer uses a Mexican San Andrés wrapper over a Dominican binder and Dominican fillers.

It’s offered in five sizes, four of which are regular production, while the Figurado is limited to just 100 boxes. 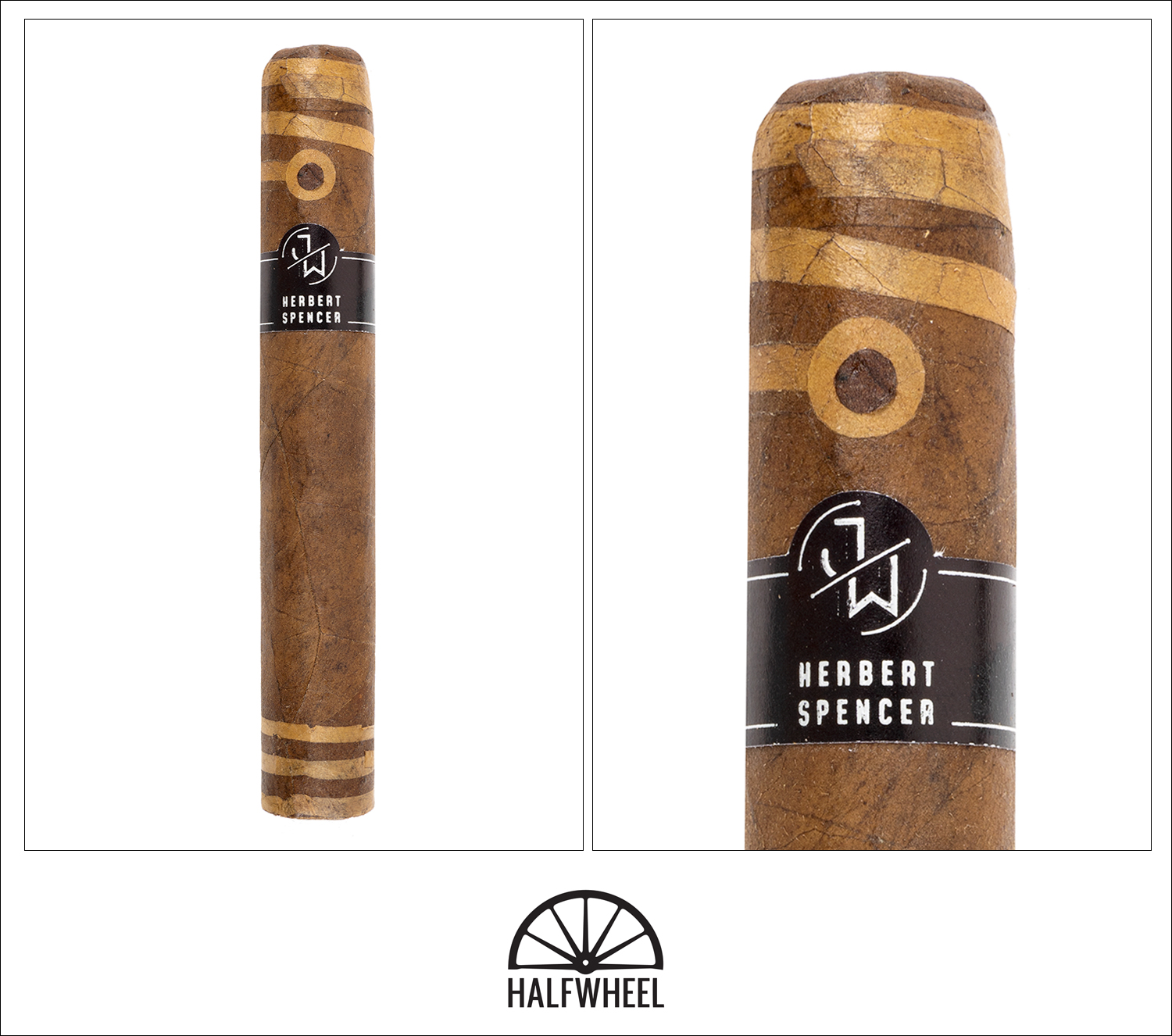 While I’m sure this is sacrilegious to the Paisley Park faithful, the top of the cigar reminds me a bit of Prince’s logo. Art designs on cigars wrappers are becoming much more prevalent in the modern cigar market and this is certainly an interesting one, particularly considering that it’s across a new company’s entire portfolio. There appears to be three different colors of wrapper tobacco, maybe four, as the accent pieces aren’t all the same hue. I suspect they are the same varietal of tobacco but the tobaccos are a bit more red for the upper accents on two of the cigars. Aroma from the wrapper is full with an underlying sweetness, a smell that reminds me of sandpaper, a touch of acidity and some pecan. The foot is medium-full with nuttiness, a sweet praline pecan flavor and some orange bitters. Cold draws have some pleasant floral flavors joined by some grassiness, sourness and some rocky flavors. At times, the profile reminds me a bit of good tequila. Two cigars have draws that are slightly open, one has a draw that is very tight, albeit not plugged. None of them are in a particularly great spot.

The Herbert Spencer Robusto begins with some earthiness and sweet mayonnaise. On the sample that’s tight, I barely get much smoke in the mouth so the flavor seems much milder. On the other two cigars, it’s more of a medium-plus. All three cigars have a relatively similar profile, a mixture of nuttiness, creaminess and some molasses accented by a bit of metallic tingles. Retrohales are awesome with a vibrant mixture of citrus, teriyaki sauce, nuttiness and a much more reduced metallic sensation. The finish has lots of nuttiness, oak and oranges. Depending on the draw, the profile is either medium-full in flavor or just south of medium. Body is medium-plus and strength is mild to medium. None of the samples need any help from a lighter but the tight draw isn’t particularly pleasant and is a stark contrast compared to the other two in both flavor and construction.

While I slightly prefer what was going on in the first third compared to the second third, there’s a lot more flavors in the middle parts. An earthiness emerges right as the second third begins and by the halfway mark, it’s the most dominant presence in the cigar. The teriyaki flavor is right behind it now, joined by some lavender and a bit of that metallic flavor. Retrohales are similar, but unfortunately much more metallic. There’s an increased citrus presence after the halfway mark, which is nice, but between the increases in citrus and mealtime flavors, I can’t taste any of the nuttiness. The finish has a distinct damp wood flavor, sweet creaminess and some more fo the metallic flavor. Flavor is medium-full, body is medium-full and strength remains mild-medium. On the two samples with slightly loose draws I avoid any touch-ups, but the smoke is getting hotter. On the other sample, a touch-up is needed to help with smoke production. At a certain point, things seem to fall apart for the Herbert Spencer Robusto. It doesn’t end up a horrible cigar, but the profile in the final third is a stark contrast compared to the first two portions. It’s almost like watching a swimmer or a runner in a race who jumps out to an early lead and then runs out of gas about 90 percent of the way to the finish line. Both the earthiness and the metallic flavors pick up, slowly growing out of the remaining flavors one by one. At times, particularly if I take long breaks in between the puffs, I can get some more flavors, but I’m really having to work hard to find them. Retrohales are a bit of a reprieve with earthiness dominating grassiness and some raspberry, but it’s a far cry from how much I enjoyed the retrohales in the first parts. Flavor is medium-full, body is medium-full and strength is mild. I end up having to make touch-ups in the final third to each cigar, twice because of a wonky burn and once to help smoke production. The Herbert Spencer Reserve is a good cigar for the first three and a half inches. But at a certain point, it just ran out of steam. It’s a shame because I really was enjoying a relatively easy smoking experience and the unique flavors, but the score here isn’t likely to reflect that. A lot of the blame goes to the one sample that was way too tight. Honestly, if that cigar wasn’t being smoked for review I would have walked away from it pretty early on and pulled a new cigar out of the humidor. It still produced similar flavors, but it added annoyance at the expense of a vibrant flavor. Still, these three cigars were promising enough that I’ll pick some of the other lines up to try the next time I see them on a shelf at a cigar store.