In 2003, Arturo Fuente released a special cigar as a promotion for retailers who won a contest. Only 165 boxes of 25 Hemingway Classics with a Ecuadorian sun grown wrapper were released. Those 4,125 cigars are the only example of this vitola with this wrapper and blend.

Thanks to a great reader with a keen eye, I was able to purchase a box of the Hemingway Classic Sun Grown from one of the original dealers who won the contest back in 2003. The box was unopened when purchased and had been sitting in the humidor since then. The cigar itself is quite rough to the touch with very little oil to speak of. It is a medium brown color and has small veins going up and down its length. The wrapper smells faintly of aged tobacco and pepper and the cellophane the cigar came in has a nice brownish tint. The cigar is also very firm when squeezed.

Immediately after torching the foot of the cigar, I get flavors of creamy leather mixed with tobacco and just a bit of pepper. Quite a bit less than I expected, but there seems to be very little actual flavors so far. 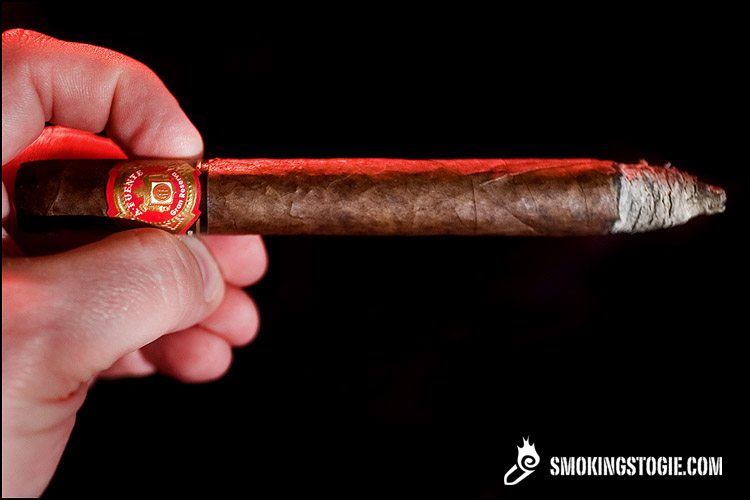 The second third started with a literal explosion of spice. The Hemingway Classic calms down after about 15 puffs, but the spice stays in the background for the rest of the cigar. The sweetness from the first third all but disappeared, although I could still taste a bit of leather, and was replaced with a wood flavor that was underwhelming to say the least. I also taste a bit of old, stale grassy taste that was borderline unpleasant. The final third is where this cigar really falls apart. Out of nowhere, the cigar gets extremely bitter, not the well, let’s keep smoking and it will get better bitter, but more like put this cigar down bitter. The bitterness overwhelms all other flavors and it is obvious to me that it was not going to get any better. However, I want to make sure, so I smoke as much as I could before finally giving up. “Disappointment" does not even begin to describe what I was feeling at the end of this cigar. I was expecting a fusion of two of my favorite cigars and instead I got a foul tasting mess. Every time I hear about a cigar that I have been wanting to try get a bad rating, the first thing I ask about is where the cigar came from, and where it had been stored, as storage conditions can be a huge factor in the quality of the final smoke. I know exactly where these cigars have been since they were released and I have to assume that these specific sticks have just gone way past their prime, perhaps never to return to anything close to their former glory.