There is a certain expectation in the cigar industry that when a new line comes out in a natural wrapper, a maduro version is almost certain to follow. It’s not a universal by any means, but look around and you will see more examples than can be listed here, and you probably don’t even need to be in your local retailer’s humidor to rattle off at least five examples.

In the case of Crowned Heads and the Headley Grange line, the process of releasing a maduro version took about three and a half years, but it has finally happened as an exclusive release to JR Cigar.

Headley Grange was Crowned Heads’ second line, the follow-up to Four Kicks. Unveiled at the 2012 IPCPR Convention & Trade Show, a limited batch of 1,000 boxes of the Estupendos size were released to retailers after the show, with the remaining sizes being released in Spring 2013. In addition to getting favorable reviews, the cigar also became very well known for the origin of its name, as Jon Huber wanted to create a cigar that tasted as distinctive as the opening drum beat of Led Zeppelin’s “When the Levee Breaks,” which was recorded at a studio in England known as Headley Grange. 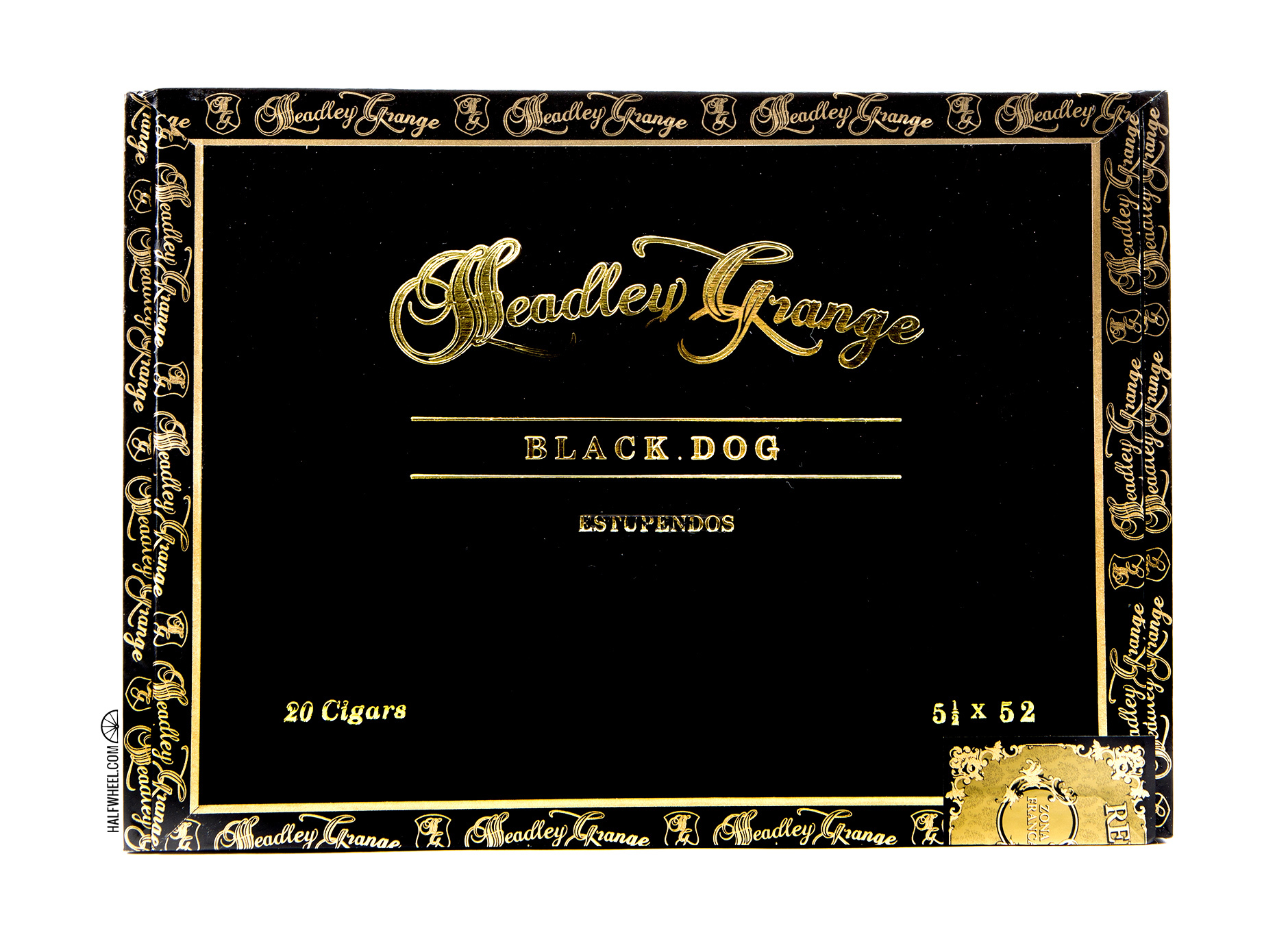 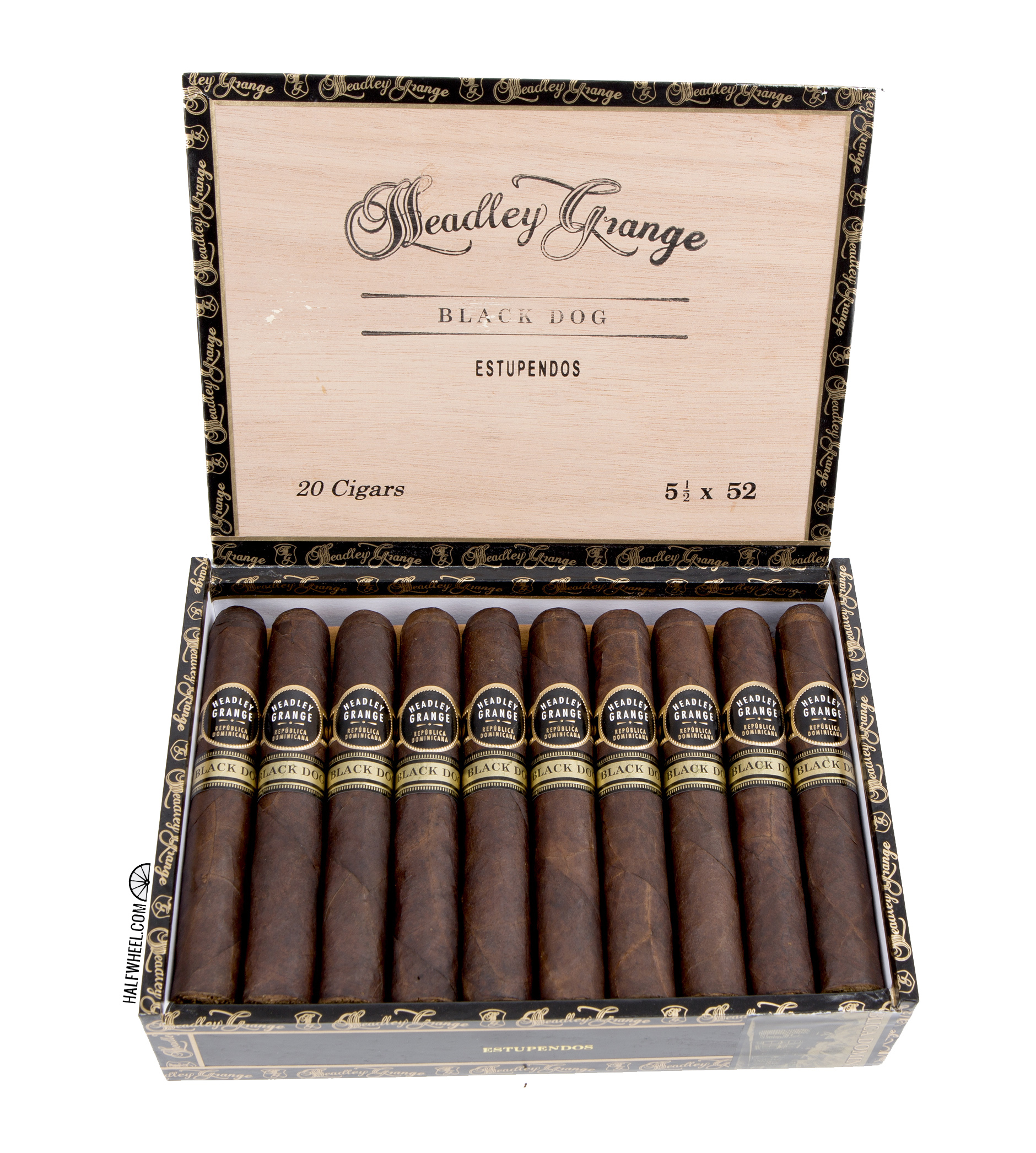 For this release, Crowned Heads returned to Led Zeppelin for inspiration, and in particular the album “Led Zeppelin IV,” which contains the song “When the Levee Breaks.” Also on that album is a song entitled “Black Dog,” which seems to fit with the dark Connecticut habano wrapper on the maduro version of the Headley Grange. Underneath, the Nicaraguan binder and filler remain the same as what’s used on the original. 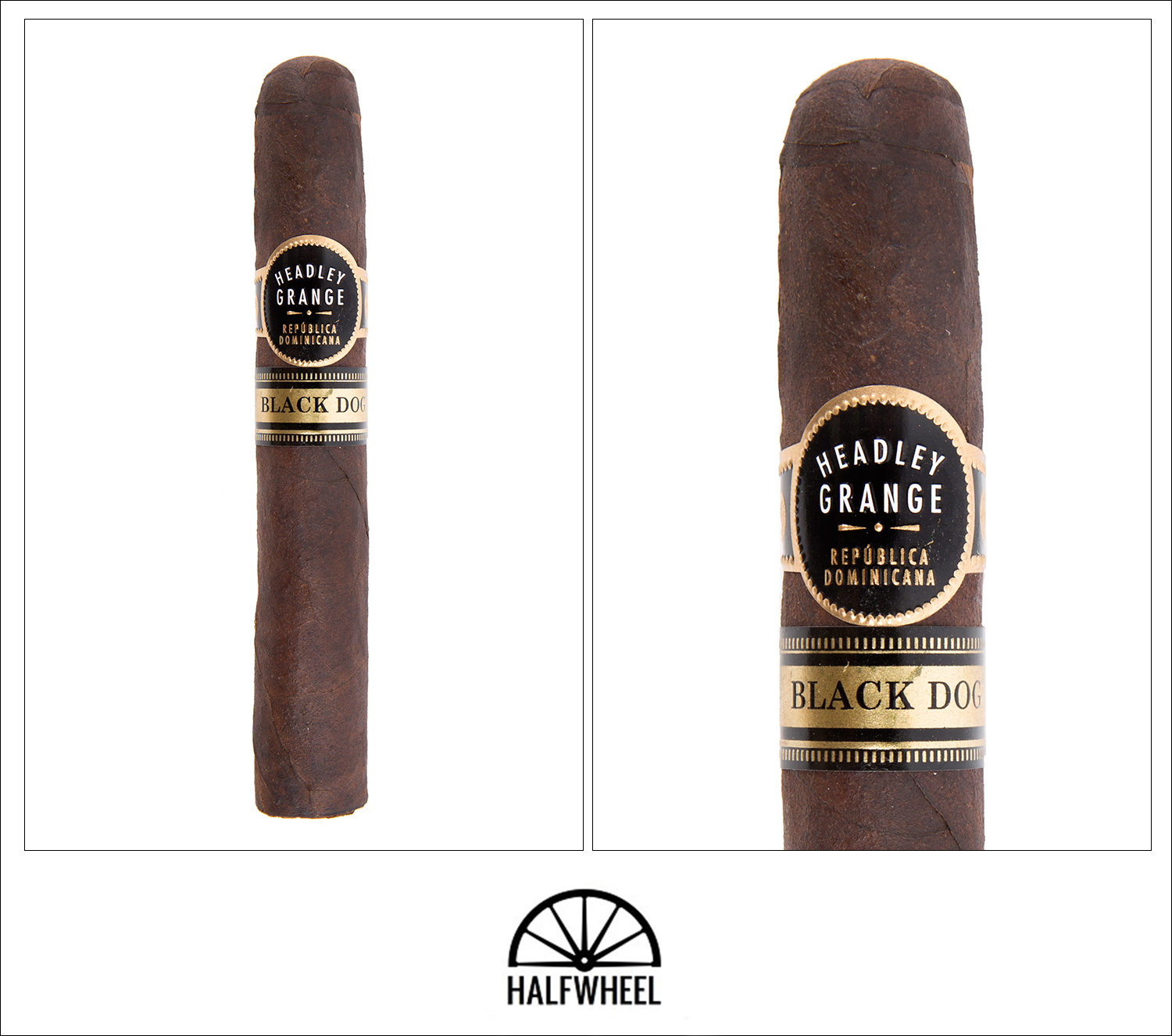 There’s a lot to like about the appearance of the Headley Grange Black Dog, but there is also a lot to take issue with. The dark, oily wrapper has an appeal thanks to a dark, oily shade of brown, decent veins and tooth and mottling that gives it some color variation, but depending on the sample, the wrapper turns several shades darker above the band and around the head, creating a visual mismatch between the two shades. Likewise, noticeably lighter spots appear around the veins in another sample. Similarly, the colors of the two bands are both black and gold, but the golds are drastically different as are the fonts, so any attempt at visual consistency has been broken twice. It appears to be a well-rolled cigar; the seams are flat, there’s a bit of uniform give and the cap is applied well. I have a hard time placing the aromas that come off the foot of the cigar; there’s a combination of warmth, wood and tobacco that have me thinking of a tobacco barn, but the tobacco component isn’t quite right and leads me into a factory sorting room where the tobacco is older and fermented. There are touches of chocolate and cherry sweetness, virtually no pepper, and an overall cohesion that works very well. I find myself having to take a few slices at the head to get to a point where I can draw through the cigar, as it appears to have more of a covering than other cigars. When I get there, I’m greeted by a very serviceable cold draw with air moving well but not too freely and a subtle tanginess of jerky, wood and dried fruits.

A biting flavor kicks off the first Headley Grange Black Dog that I light up, with pepper standing out among a confusing mix of flavors, though it seems isolated to that one sample. The other samples sort out the flavors much better, with the pepper still pronounced—particularly in the nose—and supporting notes of coffee with cream at the base and a varying amount of earthiness thrown in for good measure. The first clump of dark gray ash holds on for about an inch, which also happens to be when I need to relight the first sample. By the time it’s gone, the cigar has mellowed out the rougher parts and begins to show a very subtle bit of sweetness alongside an increasingly earthy profile that has some pepper, a bit of rock and a more fragrant version of the prelight aroma. 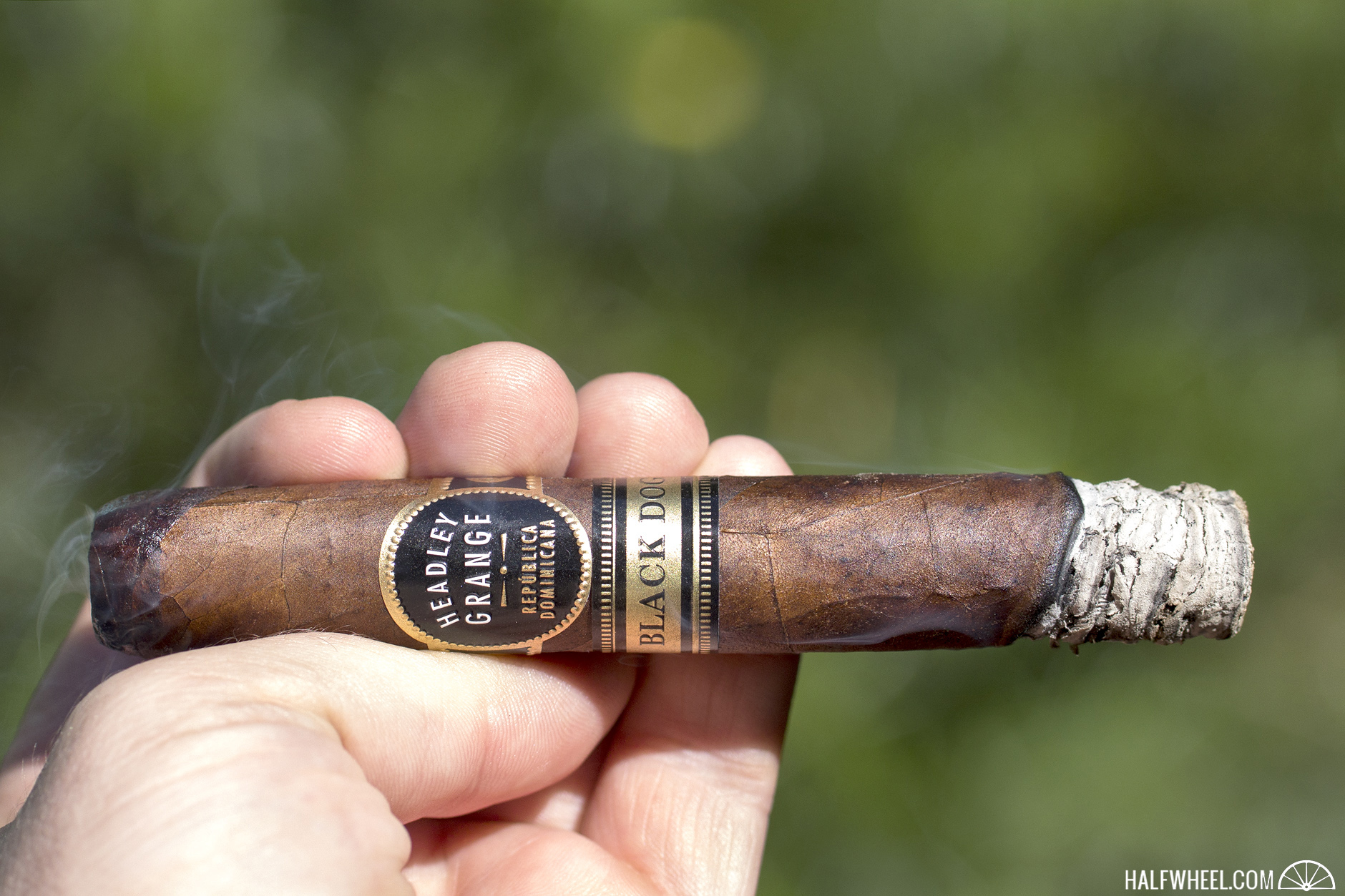 While it’s not the most upfront flavor I’ve ever tasted, a base note falling between regular coffee and espresso seems to be the one constant that my taste buds pick up through the beginning of the second third. At times it gets a bit earthy, at other times more peppery, but never sweet and never particularly acidic or bitter. The Headley Grange Black Dog Dobles continues to fall a bit on the boring side until the midpoint, and the change is fairly abrupt. To say that the cigar is in a much different place at the midpoint from where it started would be a gross understatement; it’s almost a different cigar as chocolate and raisin sweetness has emerged, the pepper is subtle but present on retrohales and in the aroma, while the overall profile is much more balanced and complex. A note of coffee begins building up at the start of the final third of the Headley Grange Black Dog Dobles, and while it starts out very enjoyably, begins to pick up a bit of acidity and harshness for a few puffs before fading away. While the cigar doesn’t become noticeably stronger, it does impart a growing presence above the neck, which is compounded by the fatigue from a slightly tight draw and slow burn in the second sample. There isn’t one particular aspect of the flavor components that begins to get harsher as none seem to be increasing in quantity or character, yet the last two inches begin to take a bit more aggressive tack on the throat and palate. That harshness also extends to the nose via retrohales; while still on the peppery side, it’s not the pepper that seems to be the culprit in the change, but rather just an overall pivot in the smoke’s character. The body continues to get fuller as the smoke begins to warm up a tough in the final inch-plus, remaining palatable but giving a clear signal that the end to the cigar is quickly approaching. A touch more harshness and pepper become the more concrete indicators that the cigar is ready to be put down, which for me tends to be with just over an inch left. 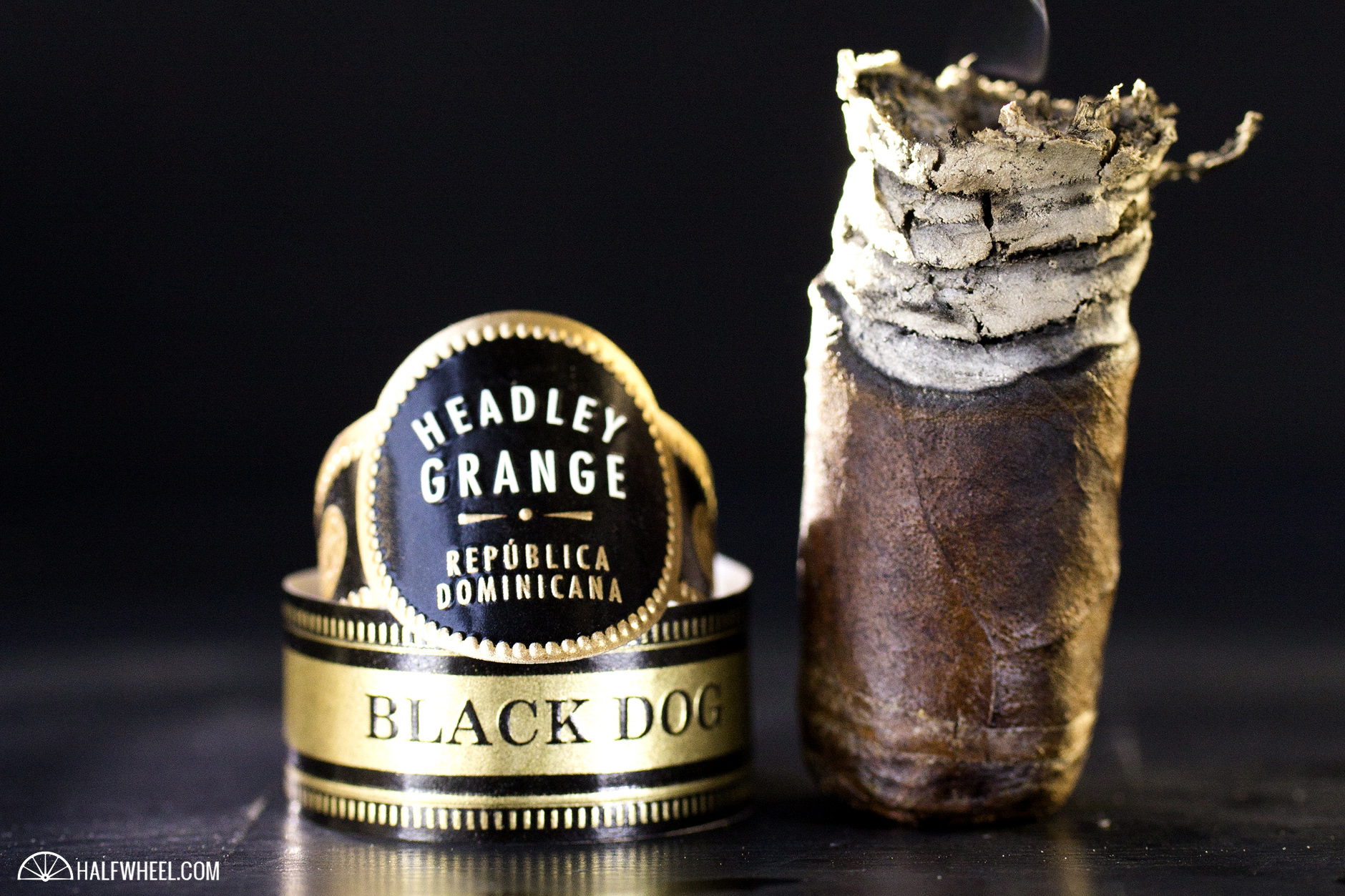 While the idea of putting a maduro wrapper on a cigar might be the norm, it doesn't always mean it's a good idea. The Headley Grange blend was fairly solid on its own, and while there were likely a number of different options that could have been used for a maduro wrapper, the one that got selected simply didn't add anything to the blend for my palate. A few burn issues didn't help either, but those were fairly minor compared to the issues I had with the flavor. If a maduro version of the Headley Grange blend was really in order, I have to think it would taste better than this, be much more widely available and would have come out by now. Unfortunately this feels like a project thrown together for any number of reasons other than delivering a good blend to market.