Originally named The Harvester after a race horse that set the half mile record in 1925 and jockeyed by legendary rider Edward “Pop” Geers, The Harvester cigars eventually dropped both theThe before its name and the somewhat iconic horse head logo on their boxes and bands, becoming simply known as Harvester.

Unfortunately, but somewhat predictably for such an old release, very little is known about the actual blend of these cigars, how many were made or even the specific factory they were rolled. What is known is that they were produced in Pennsylvania and that they dropped their price from 10 cents to five cents each in 1933.

An ad in The Milwaukee Journal explained a bit about the blend, if you can call it that.

Treat yourself to the luxury of prime, mellowed Havana blended with other expensive tobaccos.
Just a nickel—if you always say “Harvester.”
Even young fellows who smoke cigarettes agree with old-time cigar smokers that here is the kind of full rich flavor—the kind of mildness—that really is luxury; Harvester with a heart of prime Havana tobaccos, America’s biggest five-cent cigar value. Covered in a golden brown wrapper that is very rough to the touch, almost parchment-like, the Harvester is noticeably dry and quite fragile. While I am hesitant to put too much pressure on it by squeezing too hard, the cigar does not seem to be too hard or soft considering the size and ring gauge. There is a faint smell of oak and earth slight indeterminate sweetness coming from the wrapper. As with many cigars of this age, there’s a slight box-press.

Right off the bat from the the first puff of the Harvester, I notice a very interesting sweetness, almost like a sweetened tip on my lips and the front of my palate. The flavors come fast and heavy: aged oak, bitter coffee, earth and creamy leather. The sweetness in the profile reminds me strongly of vanilla bean, not overly sweet but extremely noticeable. There is some white pepper on the retrohale that comes and goes, and the smoke production is huge for such small cigar. I am noticing a small amount of bitterness on the finish, but it is not as bad as I was expecting, considering the age. The draw is excellent, and although the burn is a bit wavy, it starts getting better as the first third burns down. There is no strength to speak of by the end of the first third, and I would peg it firmly in the mild range. 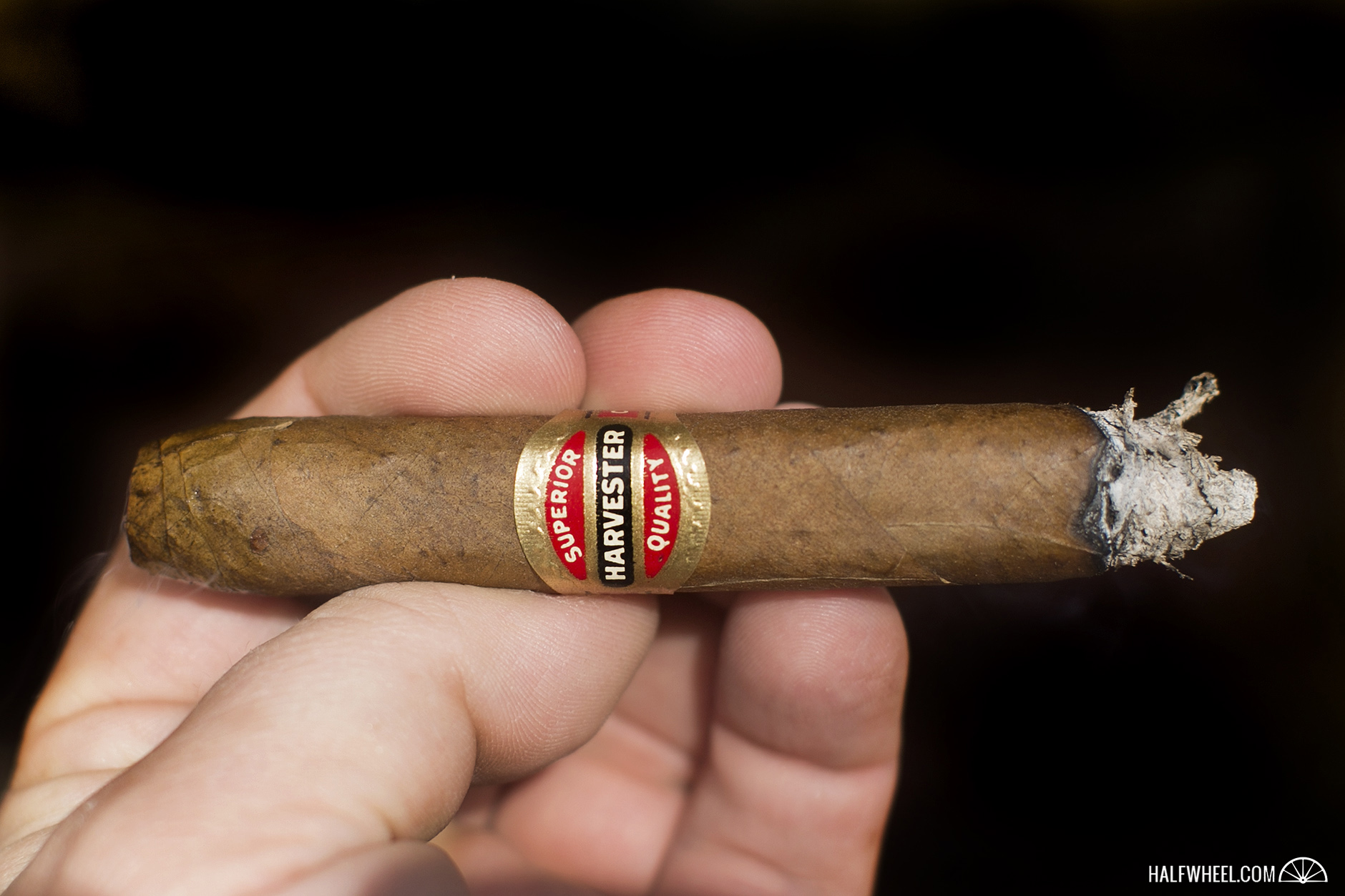 The vanilla bean sweetness is now very present on every puff of the second third of the Harvester, but the overall distinctness of the note has diminished so that I can taste other flavors of aged oak, creamy leather, earth and a slight cinnamon. Interestingly, the white pepper on retrohale as actually increased a bit, while the smoke production has decreased just enough to comment on. The overall construction is excellent at this point in the smoke, although the ash is quite flaky. There is still almost no strength to speak of, and it has not yet climbed out of the mild range by the end of the second third. 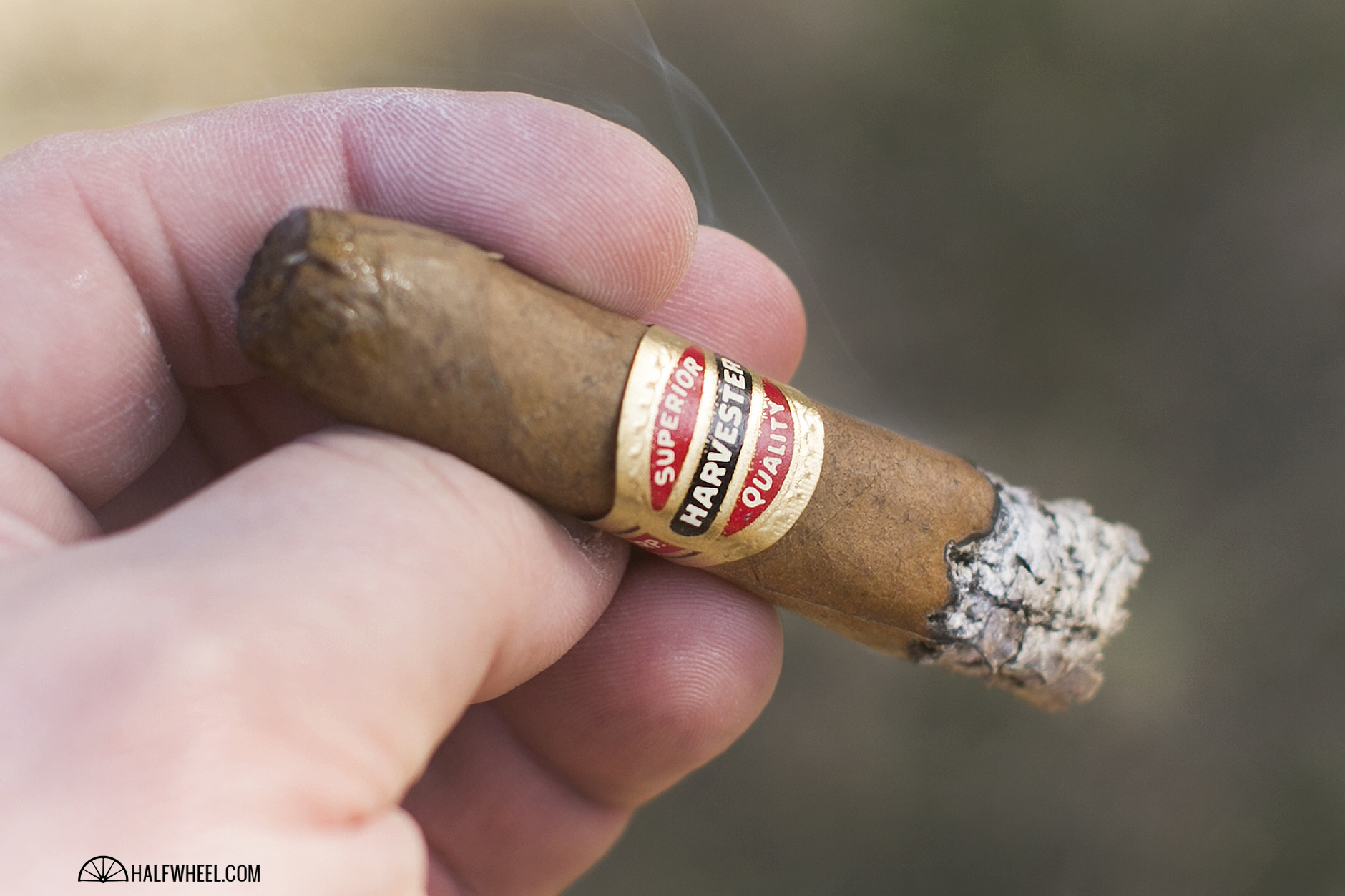 The bitterness is increasing noticeably in the final third of the Harvester, and there is less and less sweetness as the cigar comes to an end. The actual flavors in the profile have changed very little since the beginning of the cigar: earth, creamy leather, bitter coffee and oak. Construction-wise, both the draw and the burn continue to impress me, and while the smoke production has decreased since the first third, there is still plenty. The overall strength never makes it out of the mild mark, and in fact, never even comes close to breaking into the medium range. The bitterness eventually becomes overwhelming, and forces me to put it down with a little less than an inch left. I am really at a loss of how to score this cigar. Although there are exceptions, usually these types of cigars — more than 60-years-old, non-Cuban, made by the millions — fall into one of two categories: they are either totally nasty and obviously too old to smoke, or they are almost totally flavorless. The Harvester I smoked was the anthesis of both of those, with almost too much vanilla bean like sweetness that was both persistent and pervasive in the profile. In addition, after a somewhat rough start, the overall construction was excellent, and it produced more smoke than I ever would have dreamed it would. Not an amazing smoke by any means, but it was a surprisingly enjoyable cigar, and considering its age, to say I would smoke one again is a compliment.