If you visit Cuba for any length of time for the purposes of cigar smoking and enjoyment, it does not take long to hear someone talking about some of the legendary rollers that hail from the tiny island. While some are more familiar than others, there are a few who rise above the rest in terms of name recognition and accomplishments, with a prime example being Hamlet Paredes.

Patrick Lagreid did a masterful job of explaining the history of Paredes in his review of the Hamlet 25th Year Robusto here:

Paredes came to a certain level of global prominence after rising through the Cuban cigar ranks, starting as a factory roller before being moved to the front-of-house rolling table at the Briones Montoto factory where the old Romeo y Julieta store was located, and the La Casa del Habano inside the famed Partagás factory in Habana Vieja. What catapulted him into the minds of cigar smokers around the world were his travels as a global ambassador for the cigar conglomerate that began in 2000, as he would promote the brands of the Habanos S.A. portfolio in cigar shops in seemingly every corner of the world.

That would all come to an end in 2015, however, when Paredes would leave Cuba to begin a new career in the United States, joining forces with Rocky Patel Premium Cigars, working at the BURN by Rocky Patel store in Naples, Fla., and then launching his first cigar line, Tabaquero by Hamlet Paredes, at the 2015 IPCPR Convention & Trade Show.

While the Tabaquero by Hamlet Paredes was Paredes’ first line, he wanted to release a lighter blend for the market, a dream that was realized during the 2017 IPCPR Convention & Trade Show with the debut of the Hamlet 25th Year. As the name indicates, the line celebrates Paredes’ 25 years in the tobacco industry and is made up of an Ecuadorian habano wrapper covering a Pennsylvanian broadleaf binder as well as filler tobaccos sourced from both Honduras and Nicaragua. The new regular production blend was released in three different vitolas and is rolled at the Tabacalera Villa Cuba S.A. (TAVICUSA) factory in Nicaragua. Fast forward to late last year, when Rocky Patel shipped the newest vitola in the Hamlet 25th Year line to retailers. At 7 5/8 x 55, the Hamlet 25th Year Salomon is not only the longest size so far, it is also the most expensive as well as the only one to be packaged in 10-count boxes instead of boxes of 20.

“The Salomon shape has always been my signature shape to roll,” said Paredes in a press release. “I already have a Salomon for my Tabaquero cigar brand. And it’s always been very popular. So earlier this year, I rolled the 25th blend into the same shape. Rocky smoked one, looked at it, and said ‘this is really good.’ That’s where it began for this new Salomon.”

There are now four different vitolas in the Hamlet 25th Year line: 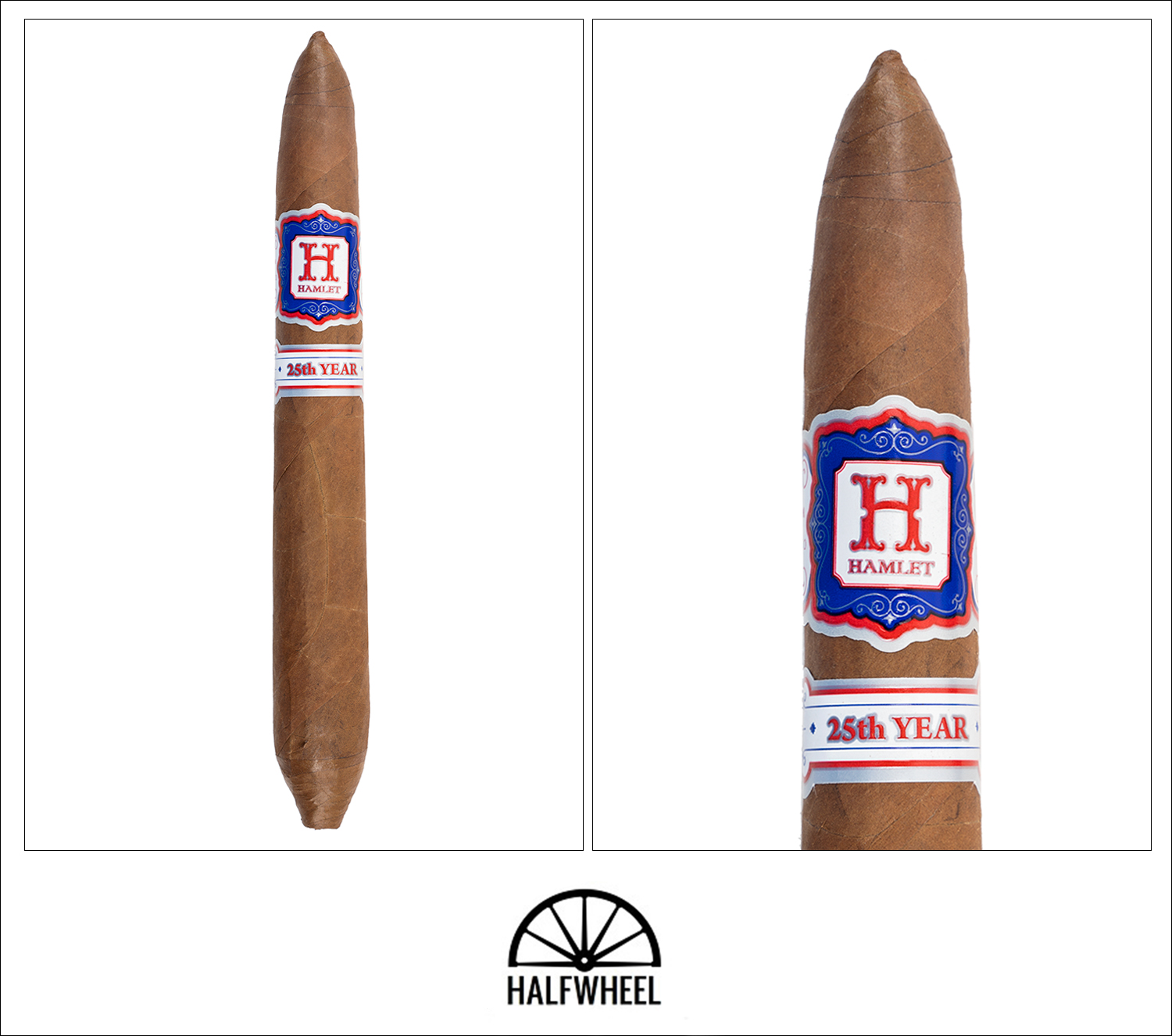 Covered in a milk chocolate brown wrapper, the Hamlet 25th Year Salomon is silky smooth to the touch, although there is not an abundance of oil present that I can see. The cigar is quite firm when squeezed and although there are a number of prominent veins running up and down the length, I can tell just by looking at it that the roller knew what he or she was doing. Aroma from the wrapper is a combination of oak, peanut shells, sawdust, hay and graham cracker sweetness, while the cold draw brings flavors of peanut butter, butterscotch, toast, tea leaves, cocoa nibs and slight espresso beans.

Starting out the first third, the Hamlet 25th Year Salomon features an extremely overt creamy oak note dominant, followed by lesser flavors of espresso beans, salted peanuts, cinnamon, cocoa nibs and even a bit of floral. There is no spice at all that I can detect, but do pick up a touch of white pepper on retrohale along with a little of the same graham cracker sweetness that has been pulled over from the cold draw. A massive amount of thick white smoke rolls off of the foot while the draw is perfectly fine so far, and although the burn is a bit jagged, it is not even close to needing a touchup yet. The overall strength struggles to make it out of the mild range by the time the first third comes to a close, and does not seem to be increasing anytime soon. Although the graham cracker sweetness in the profile starts to become a bit more prevalent as the second third of the Hamlet 25th Year begins, a new note becomes very obvious on the retrohale where it joins the still dominant creamy oak flavor, namely lemongrass. Having said that, the rest of the flavors in the profile stay pretty much the same as the first third, including more nuts, toast, cinnamon, dark chocolate and gritty earth. Construction-wise, the Salomon has calmed down a bit, with a wonderful draw and a burn line that is still trouble free, albeit still not razor sharp. Finally, although the strength does increase a bit, it still fails to come anywhere close to the medium mark by the time the second third comes to an end. The final third of the Hamlet 25th Year is a virtual carbon copy of the previous third, with the same creamy oak and lemongrass combination dominant, followed by other notes of gritty earth, toast, cinnamon, dark chocolate and a touch of generic nuts. Although the level of the white pepper remains about the same, the graham cracker sweetness on the the retrohale decreases just a bit, leading to a slightly less complex profile overall. The draw continues to impress, but the burn has started to waver, forcing me to touch it up a couple of times in quick succession. There is no surprise with the level of strength, which has failed to increase in any noticeable way, meaning that it ends up in almost exactly the same place that it was when the second third ended. To say the Hamlet 25th Year Salomon is a mild blend is a bit of an understatement, but along with that mildness comes both balance and an abundance of flavor. There are not many cigars you can smoke for more than two hours before breakfast and not really feel it, but this is easily one of them, a fact that I can attest to after doing just that with two of my samples. Yes, the profile does become a bit more linear in the final third—and the score does suffer because of that—but the flavors that are present that include oak, peanuts and lemongrass are still quite enjoyable, and the extremely good construction is just icing on the cake. Mild, flavorful and balanced—did I mention mild?—is the name of the game here, but people looking for any sort of overt strength need not apply.