While I remember each of my four visits to Cuba fairly well, I can’t recall when I first heard the name Hamlet Paredes, though I certainly remember finally meeting the man who at the time was one of the more well-known faces of the Cuban cigar industry.

Paredes came to a certain level of global prominence after rising through the Cuban cigar ranks, starting as a factory roller before being moved to the front-of-house rolling table at the Briones Montoto factory where the old Romeo y Julieta store was located, and the La Casa del Habano inside the famed Partagás factory in Habana Vieja. What catapulted him into the minds of cigar smokers around the world were his travels as a global ambassador for the cigar conglomerate that began in 2000, as he would promote the brands of the Habanos S.A. portfolio in cigar shops in seemingly every corner of the world.

That would all come to an end in 2015, however, when Paredes would leave Cuba to begin a new career in the United States, joining forces with Rocky Patel Premium Cigars, working at the BURN by Rocky Patel store in Naples, Fla., and then launching his first cigar line, Tabaquero by Hamlet Paredes, at the 2015 IPCPR Convention & Trade Show.

Of note about that cigar was that due to travel issues, Paredes wasn’t able to visit the Tabacalera Villa Cuba S.A. (TAVICUSA) factory in Nicaragua that would be making the cigar; instead tobacco and samples were flown to him in Naples for blending and review.

For his second cigar, Paredes aimed to create something a bit milder, as he noted that much of the feedback he got about the Tabaquero was that it was too strong.

“Every rolling event I would host, I would be asked for a medium or even a mild cigar, and my first blend was very robust,” said Paredes in a press release. “Now I’ll have a cigar for the everyday smoker on the market.”

That cigar would come to be known as the Hamlet 25th Year, making its debut at the 2017 IPCPR Convention & Trade Show. The cigar celebrates Paredes’ 25 years in the tobacco, with an Ecuadorian habano wrapper, Pennsylvanian broadleaf binder and fillers from Honduras and Nicaragua.

The Hamlet 25th Year is offered in three sizes. 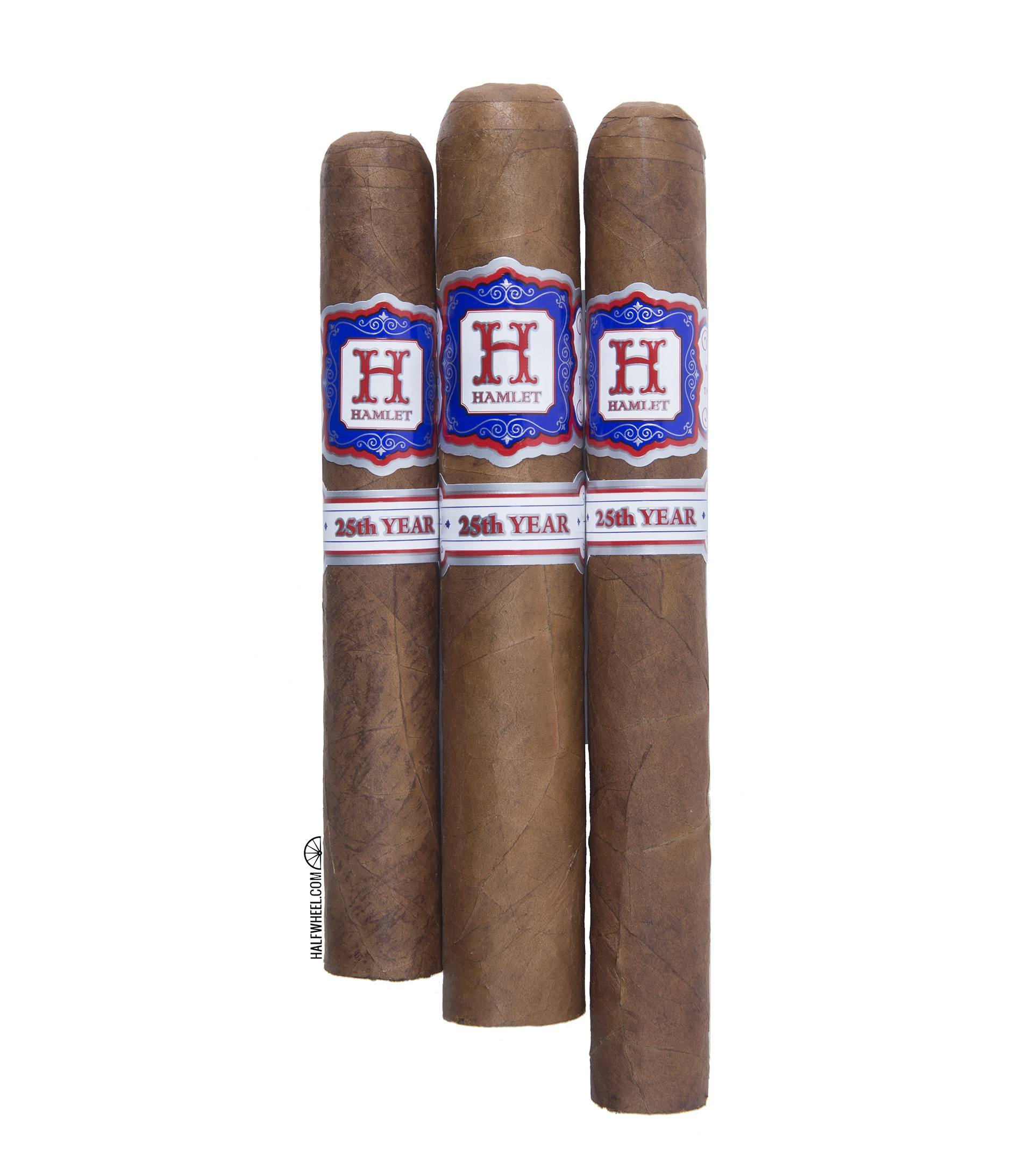 The first widespread shipment of the Hamlet 25th Year began in early October, though it was limited in scope due to delays caused by Hurricane Irma. 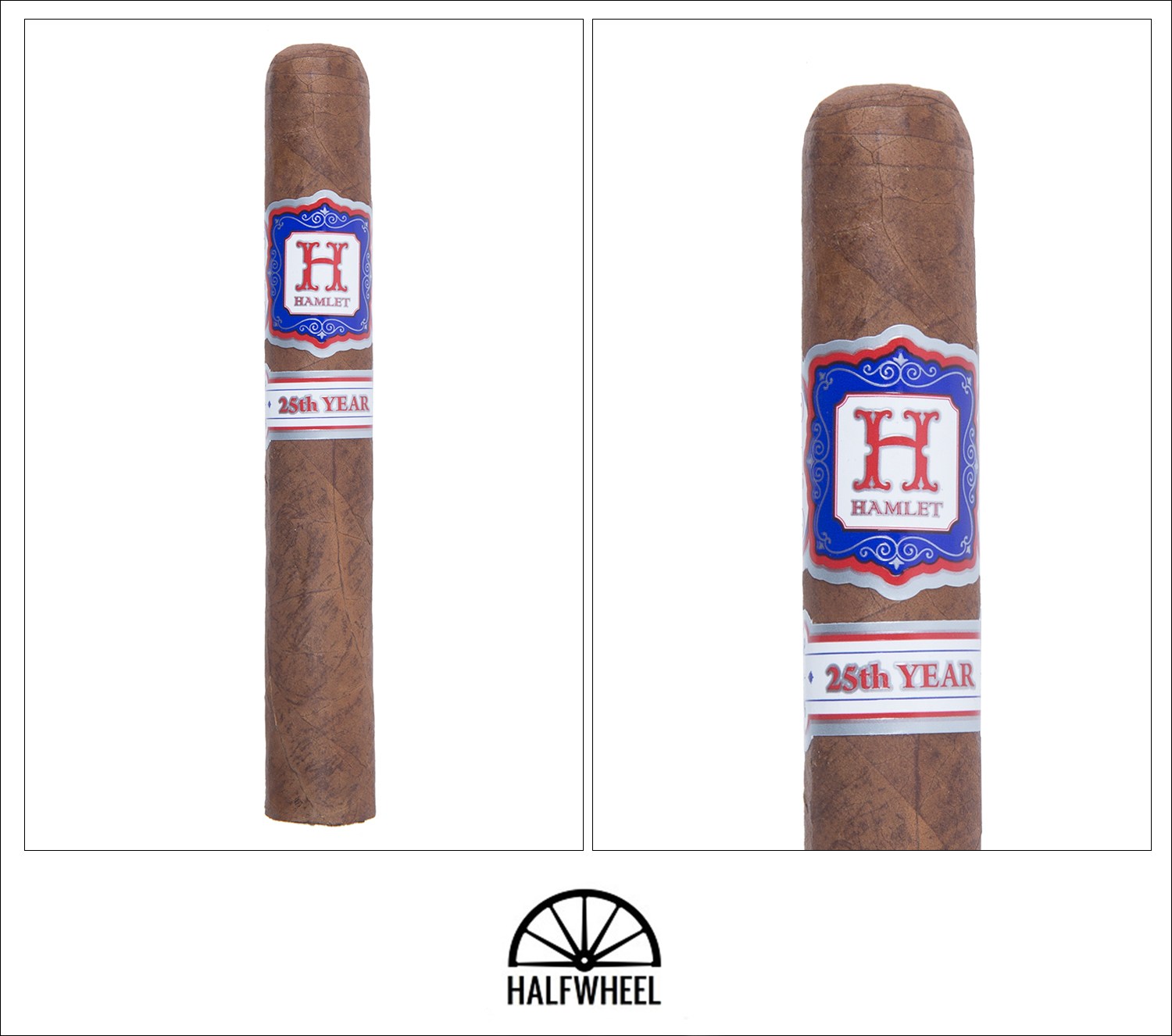 The Hamlet 25th Year Robusto is a firm cigar that appears well-rolled, though some interesting veins distract from the overall appearance on one sample, and a seeming plethora of seam lines at the cap compound that issue. Each of the three samples have an even, well-tanned shade of brown that is familiar and creates a good background from which the bands can stand out and create some good visual impact. The foot is cool and quite sweet with plenty of fruits and floral notes that stray into jellies and jams at their thickest presentations, with wheat and pretzel notes present in certain samples. While air moves well on the cold draw, it presents a near polar-opposite profile that is dry and a bit sharp, with notes of wheat bread, woods, and a sprinkling of pepper.

As you’ll recall, the Hamlet 25th Year was blended to be a bit milder than that Tabaquero, though I can’t say that would be the first thing to come to mind after the opening puffs. There is plenty of white pepper that goes after both senses, and retrohales in the first five minutes has my nose tingling quite intensely. Out of the gate I get plenty of white pepper, a bit of Champagne-style fruit and bread characteristics, and a lingering table pepper finish, particularly in the nose. By the end of the first third, the cigar has mellowed out a bit, flirting with notes of pretzel dough before picking up some cool creaminess. The cigar puts out an impressive of smoke both while being puffed on and while at rest, though the burn line is starting to get a bit wavy. 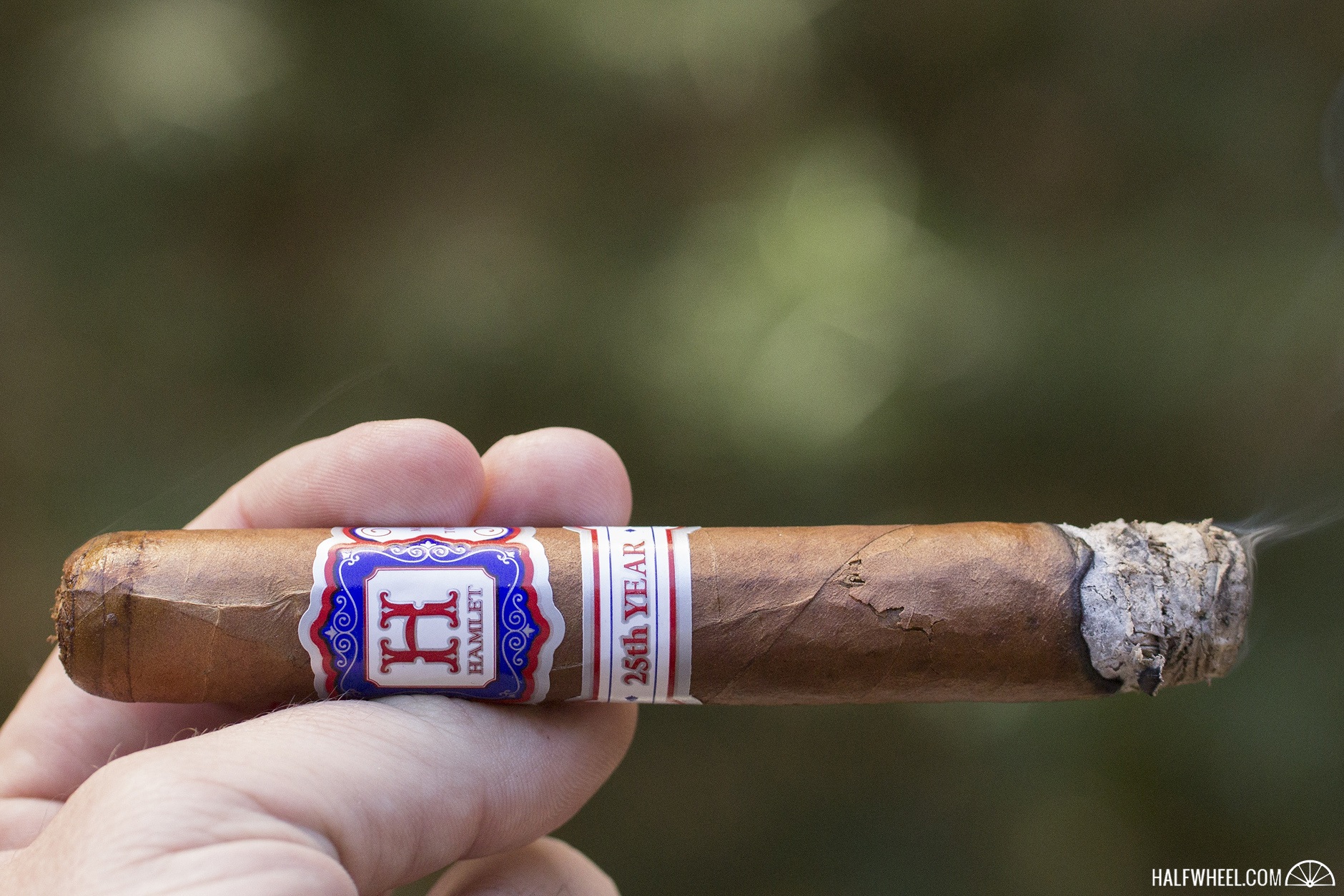 In addition to the burn line getting wavy, the ash has gotten flaky at the start of the second third, meaning I’m brushing myself off more than I’d like to while smoking a cigar. The Hamlet 25th Year Robusto has thankfully dialed back the pepper and replaced it with a cool peppermint note that meshes well with what’s left of the underlying creaminess. By the midway point, the combustion rate and smoke production have slowed a bit, with black pepper coming back into the profile and giving the smoke a good bit of kick through the nose first before making its way to the tongue. A bit of harshness and sourness makes an appearance right around the midpoint, and while it’s not overly significant, it does enough to throw the otherwise good balance just enough out of alignment to warrant mentioning. Thankfully it’s not present in every sample and fades relatively quickly when it is, with warm nuts taking its place in the transition to the final third. 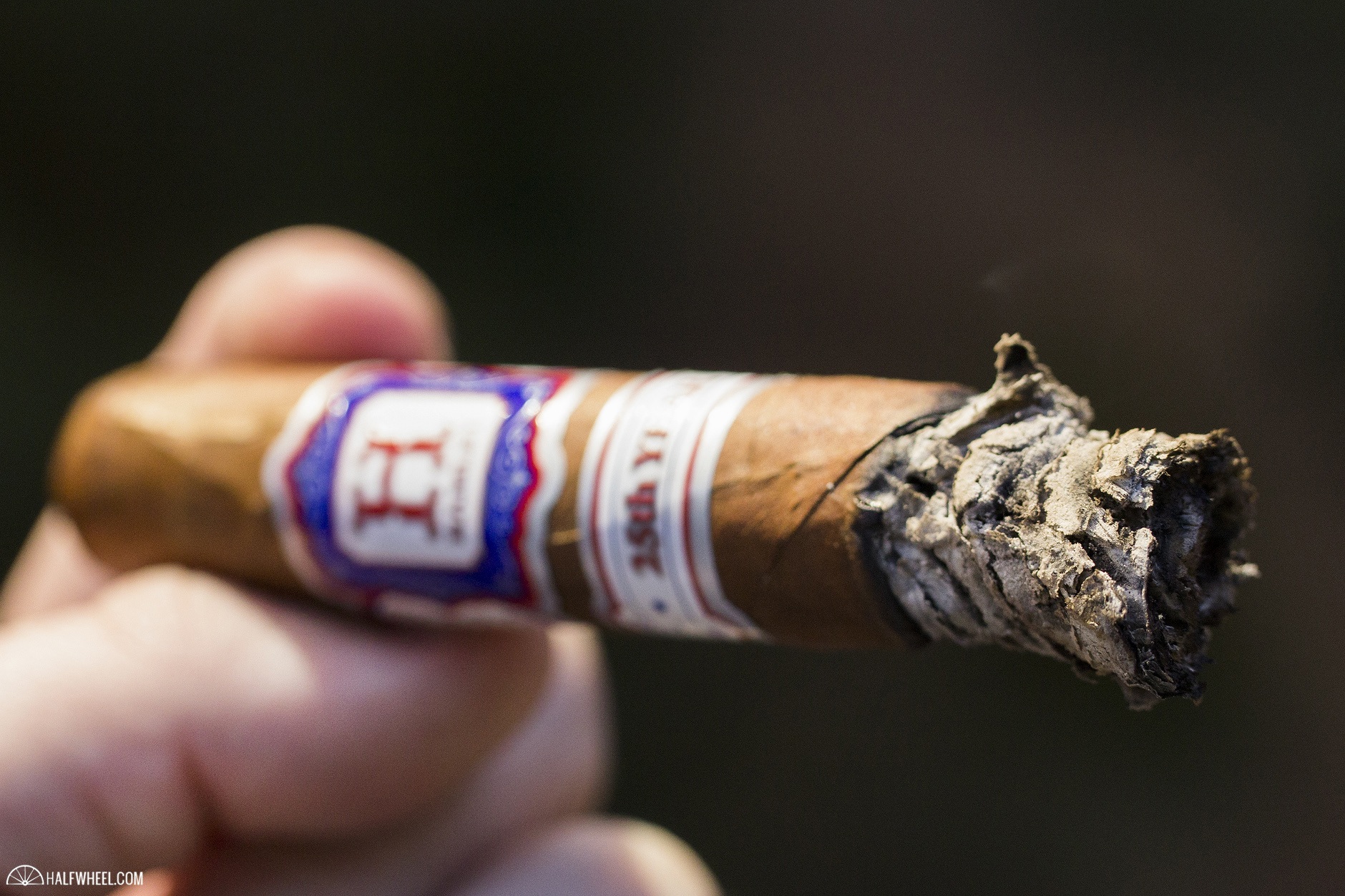 At the start of the final third, it’s clear that the Hamlet 25th Year Robusto is ramping back up in flavor, as pepper continues to gain hold of the profile, with hearty woods forming the backbone, and while earthy notes seem to get teased, they don’t become a full part of the profile. There are some trace amounts of sweetness coming out of the wood, almost like sap at times, though more along the lines of simple syrup that just glaze the profile. With about two inches to go the burn line has evened out, and smoke production is almost on par with where it was at its most billowing. 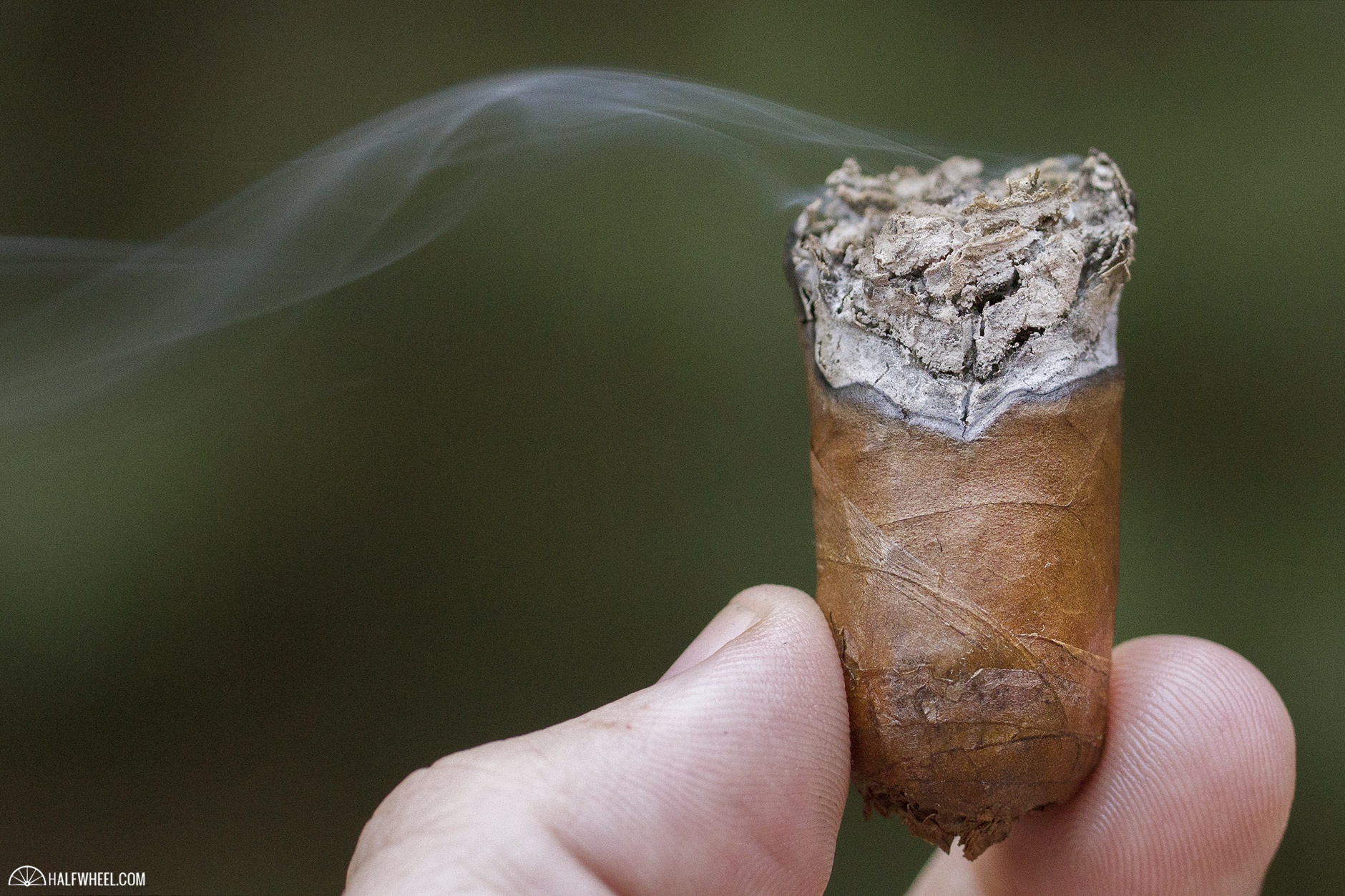 There are two things I tried to keep in mind while smoking the Hamlet 25th Year Robusto: did the cigar offer a milder alternative to the original Tabaquero by Hamlet Paredes, and of course, how did the cigar do on its own? The answer to the first question is a definitive yes, though I have to reiterate that this is not a mild cigar; I don't know if anyone could take the tobacco varietals used in this blend and create a truly mild smoke, which leads to the next answer. It is plentiful with flavor, far from shy with pepper, and strong enough to be impactful without overwhelming. While Tabaquero had its merits, I think this is much more the kind of cigar I had been hoping for from Hamlet, and one that should find a good bit more favor among his fans and cigar smokers in general.