As the saying goes, what’s old is new again.

Case in point, in October 2017, Habanos S.A. announced that it would be releasing a new collection called Linea Retro that would feature some of the company’s marquee brands in a petit corona vitola that comes packaged in retro-inspired tins.

The collection debuted with the Partagás Capitols and the Romeo y Julieta Club Kings, with the third cigar, the H. Upmann Regalías, released in November 2020.

All three of the cigars are 5 1/8 (129mm) long with a 42 ring gauge, a petit corona vitola that seems to be known by two names, the first being simply petit coronas, and the other being marevas. It is a vitola that can be found in numerous brands, including the Cohiba Siglo II, Montecristo No.4, Romeo y Julieta Mille Fleurs and Romeo No.2, the Punch Coronations and the Partagás Mille Fleurs.

It’s also a size that is found in the H. Upmann portfolio, and also under the name Regalías. The size has been available for decades, initially as a machine-made cigar before becoming handmade in 2002. The version that does not come in tins is offered in 25-count dress boxes. 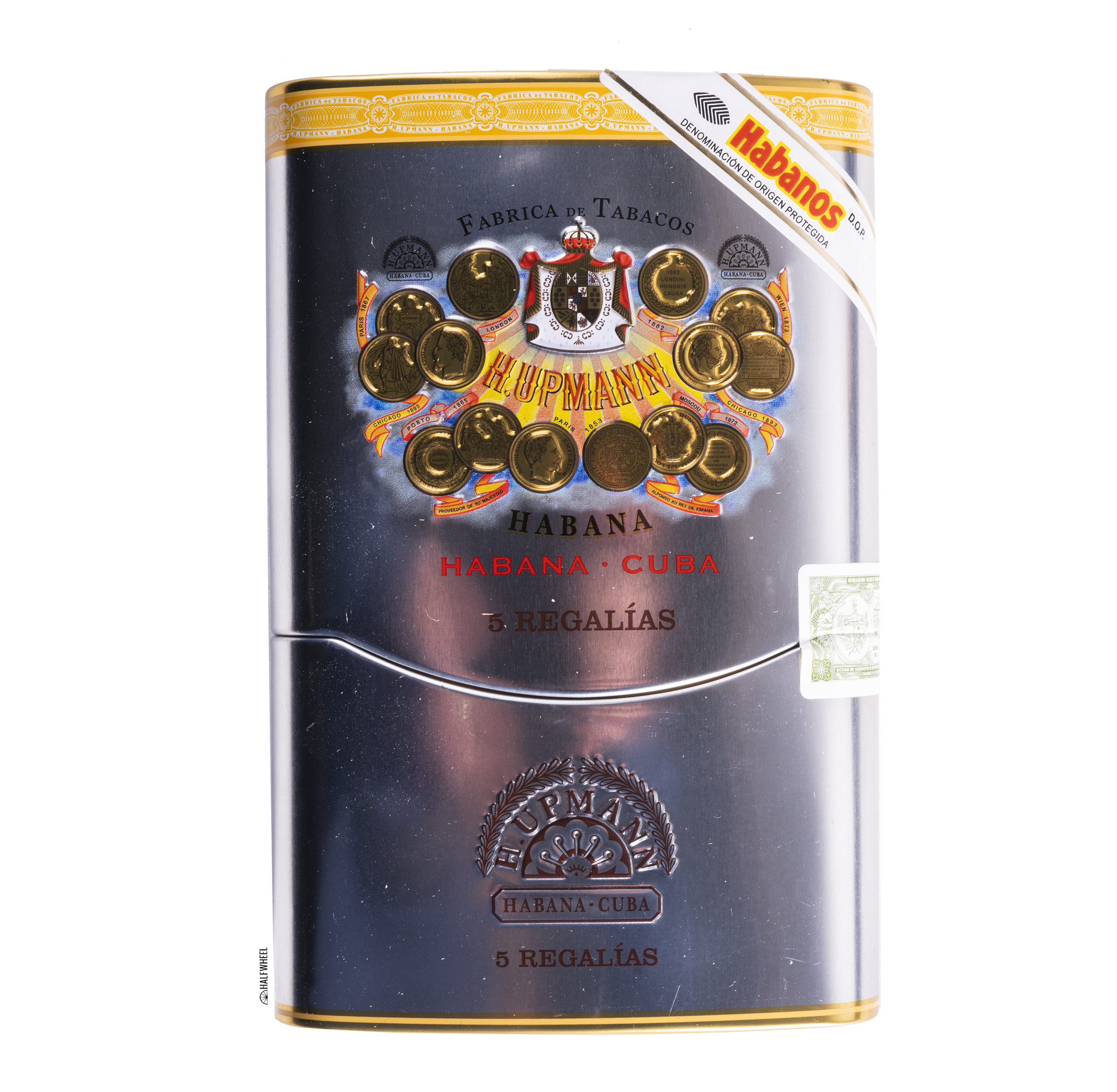 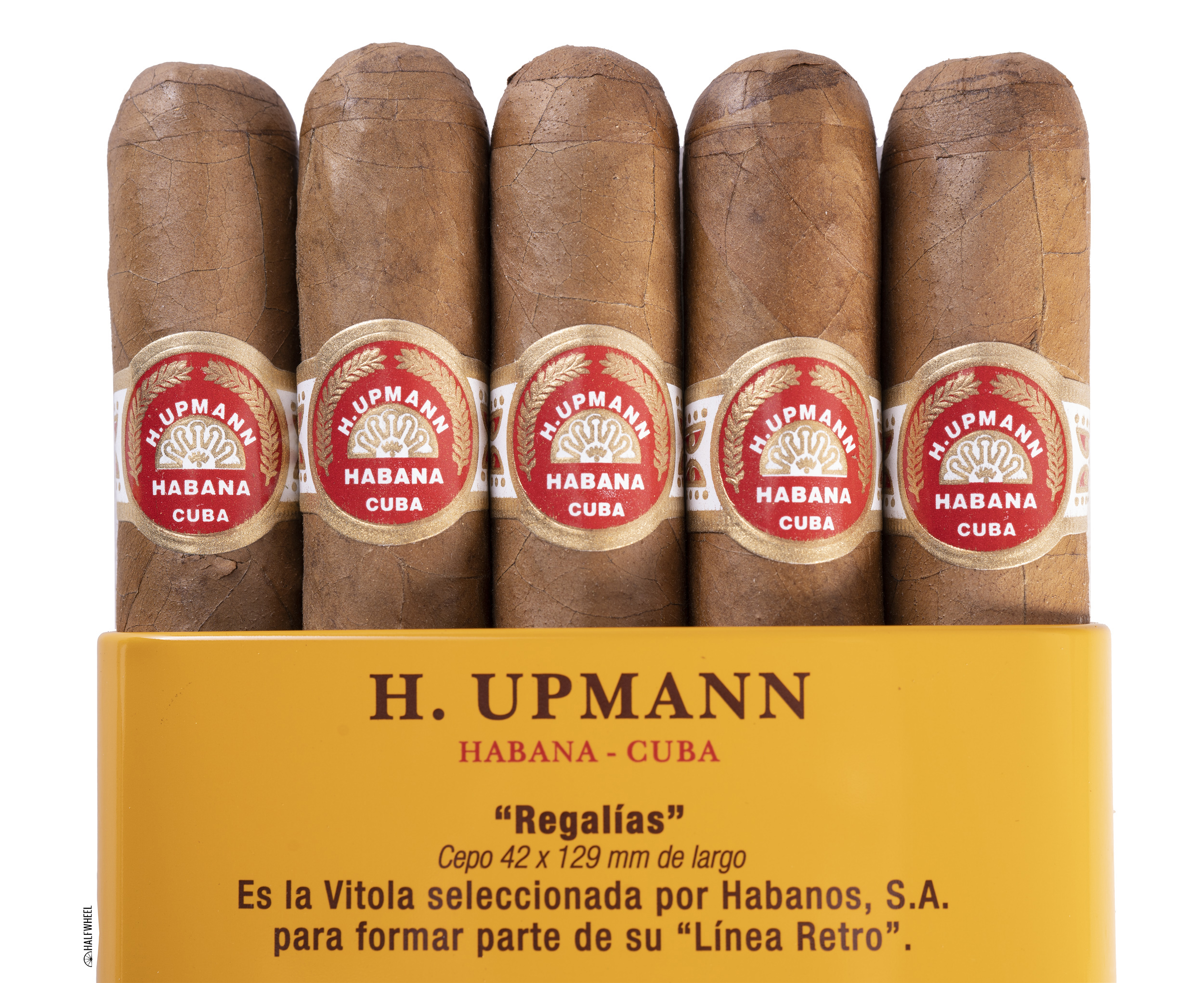 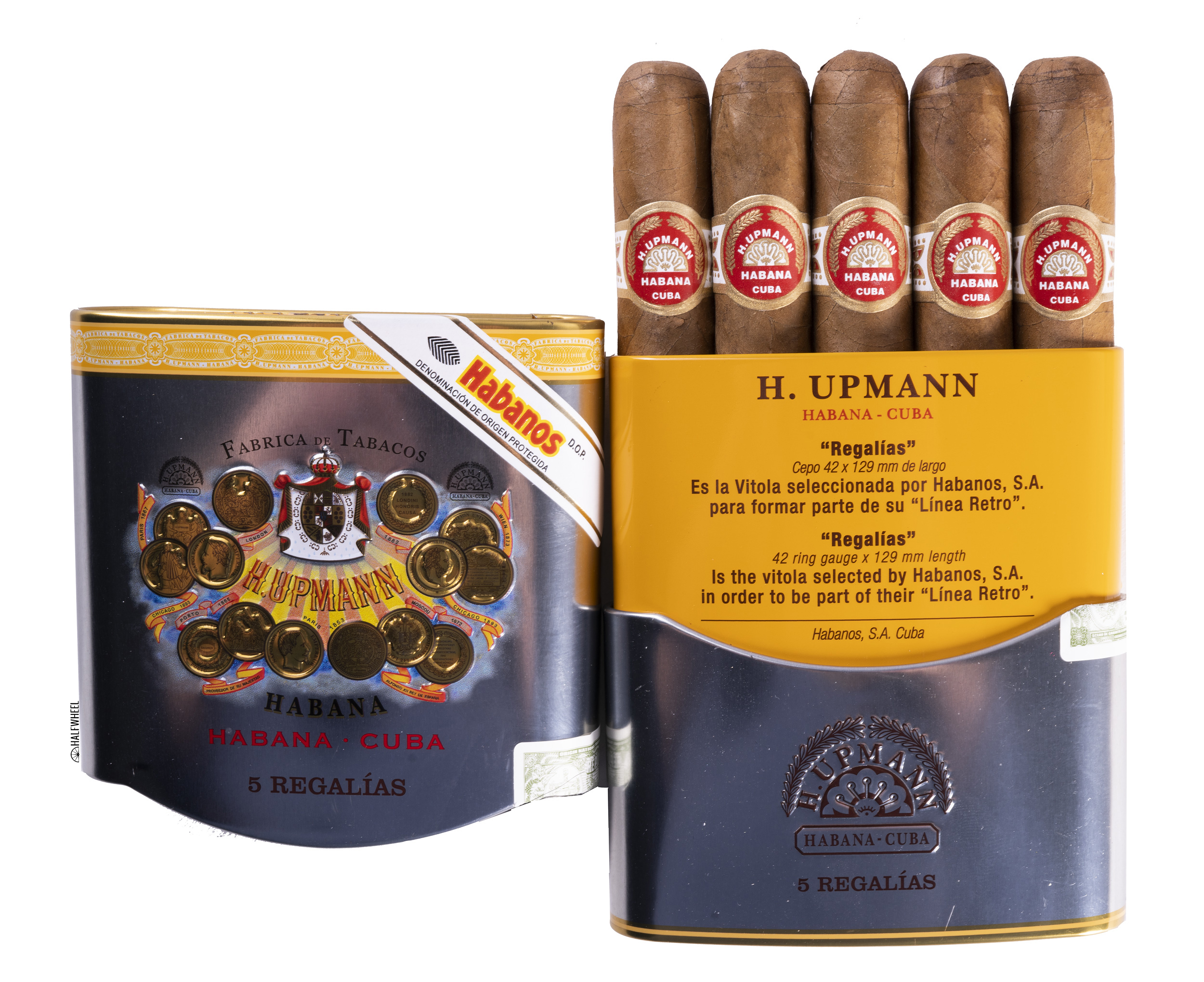 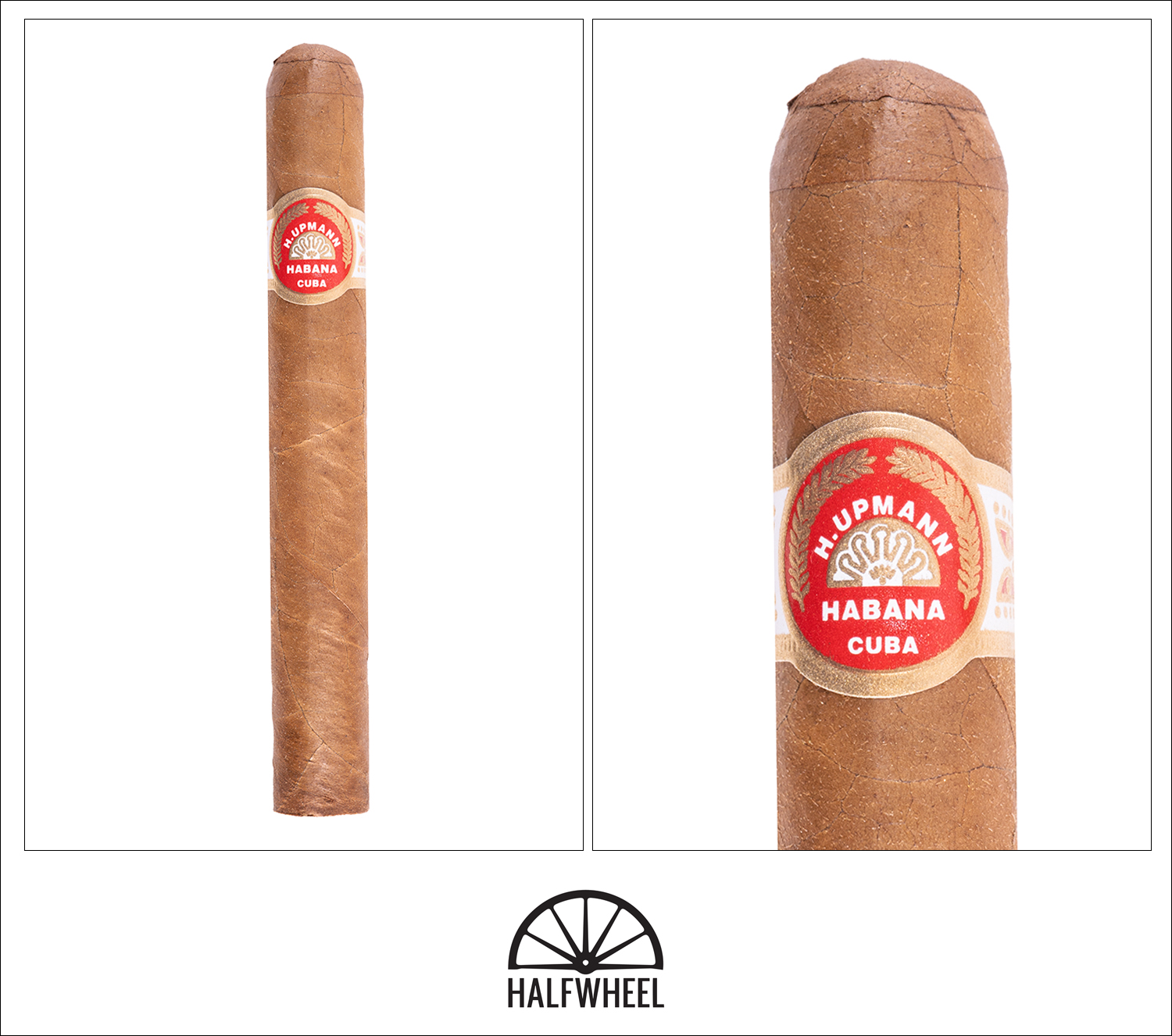 I rarely use the word golden to describe the color of wrapper leaves, but that is the first thing that comes to mind as I pull these cigars out of my humidor The leaves are perfectly tanned, and to draw a comparison, not the kind of perfectly tanned that comes from a booth but comes from just the right amount of time in the sun. The texture of the leaves might leave a bit more to be desired, primarily due to the network of veins that each one has, though none are completely problematic. It’s not bad, but as I get closer to the leaf I begin to notice more and more visual flaws. There’s also a bit of tooth to the wrapper, though it takes a bit of closer inspection to find it. The wrapper also feels quite thin to the fingers, which means I’m not inclined to check the firmness of the cigar too aggressively, but what I do get suggests it is rolled well. The foot of the cigar offers a pretty uneventful aroma, namely something between a fresh ream of paper and a new cardboard box, which is at least better than an old one. One cigar has a bit of honey graham cracker, which is quite enjoyable, while another offers a subtle hint at Honey Nut Cheerios. The cold draw is just a bit firm but not feeling restricted, while the tobacco itself imparts a building tingle on my lips and the front part of my mouth. The flavor has just a touch of creaminess, but I’m more focused on the physical sensation, which also leads me to think I’m getting some white pepper, although I’m not sure about that.

The first puffs of the H. Upmann Regalías have a good bit of creaminess, though it’s not long into the cigar that things go just a bit askew by way of chalk and a crisp white pepper that is harsher than it is enjoyable. It’s also a sensation that follows up with the tingling of my lips and the tip of my tongue, though in the case of the latter it feels a bit more biting or stinging than tingling. There’s just a slight bit of white bread or sourdough toast that emerges from that, which helps get the flavor headed in a better direction but it clearly isn’t out of the woods yet. The ash breaks off on its own a puff or two after the photo was taken, which I found myself a bit surprised by as I seem to have had fairly strong ash from the Cuban cigars I’ve smoked recently. Retrohales at this point have a bit of creaminess to them as well as some white pepper that gradually builds and tingles the nostrils, and are the more vibrant experience of the profile. If anything, the flavor feels a bit dense and reluctant to open up—or maybe simply not ready to based on where it is on the age curve—while the retrohales are a bit more forthcoming. Construction has been pretty good so far, as even with a slightly firm draw, combustion is good, the burn line is incredibly even and smoke production is sufficient. Flavor and body are on the lighter side of medium, while strength is almost non-existent. 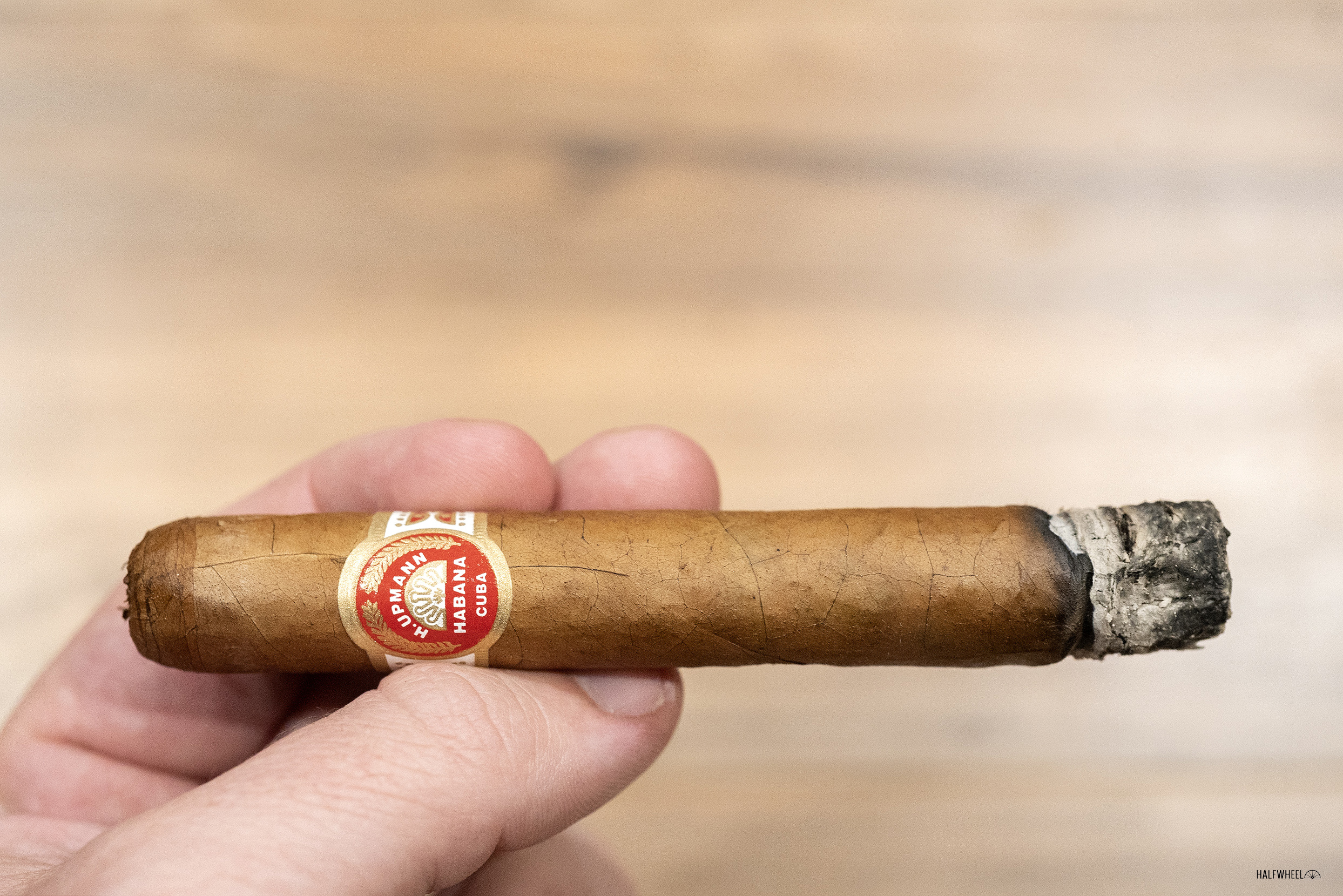 The second third of the H. Upmann Regalías picks up just a touch of black pepper, and while I don’t want to say that the flavor is finally starting to unpack itself, it’s at least evolving a bit. Retrohales are a bit fuller thanks to the black pepper as well, though I’d still be hesitant to call it much more than a light bodied, medium profile. That thought begins to change as the burn line gets closer to the medium mark, particularly when following a puff with a retrohale, as black pepper now has two venues to show its developing flavors. Creaminess is still part of the equation, while the toast note from the first third has been replaced by almond. There’s a bit of dry irritation on the back of the throat following each puff, not too different from what you might experience when eating dry corn flakes or plain tortilla chips. Once across the midway point, the pepper has to contend with a woody sourness for the lead flavor, the latter not too far off from the finish of some sour beers I have had. It’s a flavor that has me thinking more about the cigar’s youth than any inherent problems with the tobacco. Flavor is building up to a solid medium with body on its heels, while strength is still on the mild side. Construction remains fantastic, and easily one of the easiest cigars to smoke that I’ve had recently. I can’t say that I’ve picked up a lot of changes in the H. Upmann Regalías since the start, though there are some. One cigar still has a dominant flavor of toast along with a slight hint of creaminess and a light, dry wood sandwiched between the two. Another is much more black pepper dominant and a bit rougher, though the vibrance is encouraging that the profile is developing. By this point, the retrohale is well ahead of the flavor in terms of delivering a more complete picture of the profile. There is still white pepper but through the nose it is much more alive, something that might be a result of the sensitivity of the olfactory nerves more than anything. There is also more creaminess, which in turn gives a fuller body to the smoke. Yet the moment I stop retrohaling and return to just getting the smoke on my taste buds, it feels like whatever complexity it might be trying to show goes into hiding and has me thinking that these, while smokable and enjoyable now, still have a ways to go before really showing what they might have to offer. One cigar—arguably the most flavorful of the bunch—picks up a bit of chalk and sourness, which isn’t great but at least shows it has some vibrance. Flavor is medium-plus, body is medium, and strength is mild. Construction remains fantastic across the board. It's worth acknowledging that a number of Cuban cigars haven't been scoring so well on this site lately, much to the frustration and incredulity of a number of our readers. While the H. Upmann Regalias isn't an elite cigar, it is certainly pretty good for a fairly young Cuban cigar, one with a box code less than one year to the time of smoking. The flavor seems like it still has a lot of development to undergo and unpacking to do, but at this stage it is generally free from major flaws, and definitely more than just enjoyable from start to finish. It's a cigar that shows some decent progression of flavors and most notably the ability to combine the flavor and retrohale into something greater than just the sum of its parts. While I'm not thrilled about having to pay a premium to get the Línea Retro version of the Regalias, it did serve the purpose of introducing me to a vitola in the H. Upmann portfolio that I can't recall smoking before, and sometimes a bit of an uncharge is worth that to get a new experience.