It’s nothing new for a cigar company to put out a cigar in celebration of an anniversary, and It would seem that anniversaries would be a fairly easy thing to keep track of when used for such a purpose. But such is not always the case.

In the case of the Gurkha Treinta, it is a line that was released in celebration of the 30th anniversary of Kaizad Hansotia acquiring the Gurkha brand in 1989, and ultimately launching it on a new trajectory. Bear in mind that the band the cigar wears indicates that the brand was established in 1887, so it should be fairly easy to figure out this isn’t the 30th anniversary of the brand, as we’re approaching its 133rd anniversary. Additionally, Gurkha has celebrated that founding date separately, most recently with the Gurkha 125th Anniversary in 2012 and some follow-up cigars in the years since.

For the cigar, Gurkha turned to a new factory—AGANORSA Leaf— both for the tobacco and production. The blend features an Ecuadorian habano rosado wrapper over a Nicaraguan corojo 99 binder and a mix of Nicaraguan fillers that include corojo 99 and criollo 98 from the Estelí and Jalapa regions.

It is being released in three regular production sizes:

The first 1,000 boxes of each size were released in limited edition commemorative boxes. Gurkha is also releasing a five-count tin package with five Treinta Toros that will retail for $67.50.

In addition, Gurkha has released two exclusive sizes via Treinta Limitada humidors, with each humidor containing 25 of each vitola for a total of 50 cigars and selling for $800. The company is producing 1,000 of the humidors for the release.

Those cigars also were included in a second humidor release, though it’s better described as a chest that featured a fold-down front. Each chest contained 25 of each cigar, with 1,000 chests produced.
The Gurkha Treinta is being made by AGANORSA’s Tabacos Valle de Jalapa S.A. factory in Nicaragua. 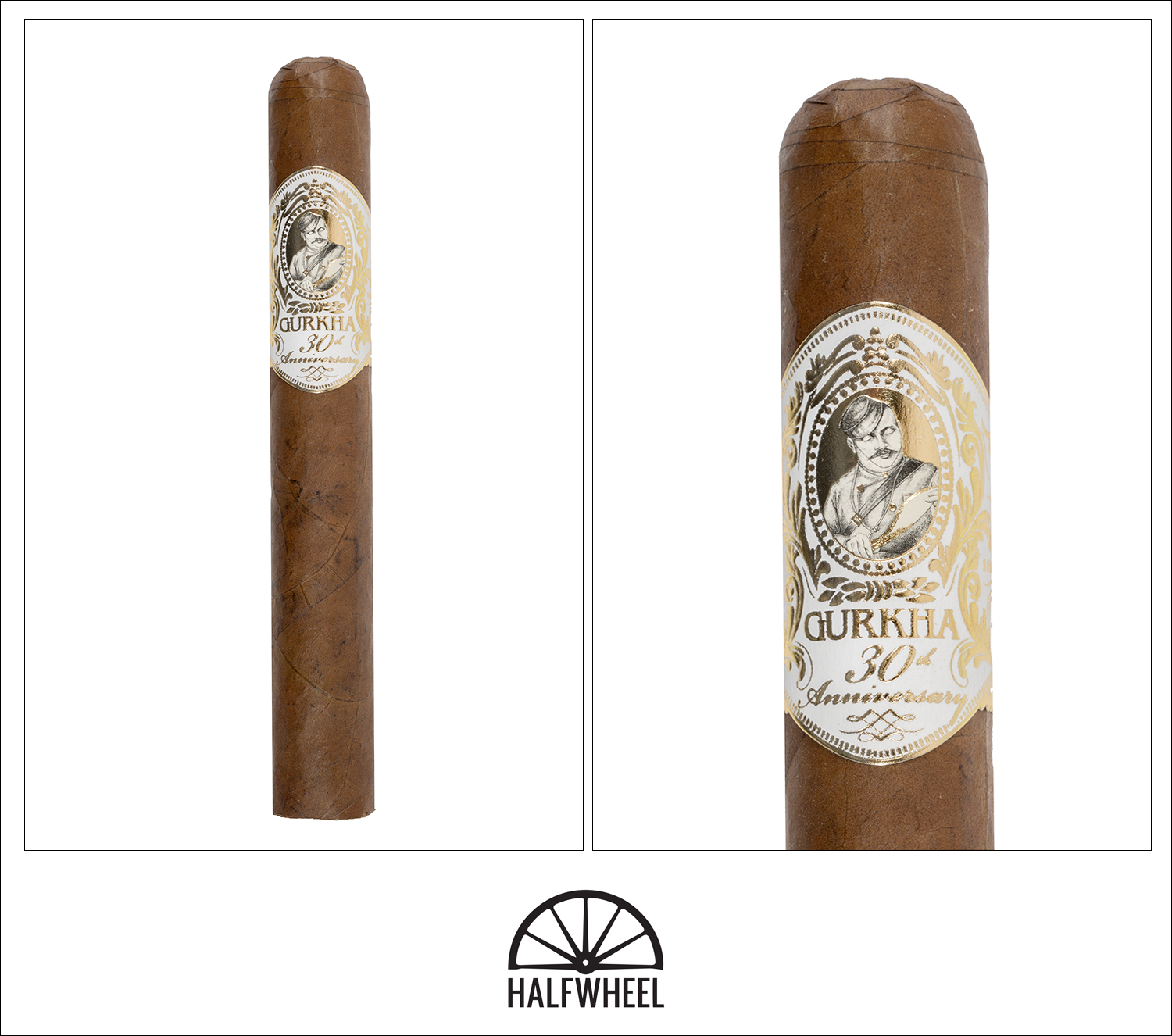 The Gurkha Treinta Toro looks pretty much like what I’d expect from such a cigar: well-rolled, medium-dark brown wrapper, and a band that has a decent amount of flourish and design. For a Gurkha anniversary release, the band feels fairly tame, with the gurkha figure featured prominently in the center, the Gurkha word mark under that and the indication that this is the 30th anniversary under that, though the fact that the word Treinta isn’t included is a bit odd. I could also easily see the addition of a secondary band—something that’s part of the humidor releases—but everything gets contained well on one. The wrapper leaf is just a bit darker than medium brown, very smooth and oily with a fairly average vein structure but absolutely no tooth. Each sample is rolled fairly firmly, not quite hard but on that end of the spectrum and with no firmness or visual imperfections. The foot of the cigar offers an aroma that at first makes me think of unsalted peanuts, but further inspection shifts that smell towards pastries, specifically the base of a cupcake, and even more specifically the part that gets left behind on the paper. It’s a bit sweet with hardly any pepper to be found save for one cigar. The cold draw offers generally easy air movement, smooth without being loose. Flavors are tame, with a bit of peanut butter, some white toast, dairy creaminess and just the slightest bit of pepper.

The Gurkha Treinta Toro starts with an easy draw that produces a plentiful smoke that takes just a few puffs to develop its character, bringing in a mix of black and white pepper that is very vibrant though the nose, whether it be a retrohale or simply the ambient smoke. The base of the profile has a bit of creaminess, some of the peanut butter flavor I picked up on the cold draw, cashew, and what tastes like a mix of dehydrated fruit, though it’s lacking overt sweetness and intensity. That fruit flavor isn’t as consistent as I had hoped, which is a shame given how enjoyable of an accent it is. If you retrohale frequently, you’ll find the black pepper creating a bit of an exclamation point on each puff; it’s quick and decisive but it does leave a lingering tingle in the nostrils. The white pepper is quick not to get overshadowed, regaining its place on the palate and pairing with a bit of earth, chalk and mineral to create a drying sensation on the front half of the tongue. It’s also making its way up to the nose, where it has brightened up the retrohale quite significantly. With these changes the flavor intensity has worked itself up to medium-full as the first clump of ash falls, while body is a bit behind and strength behind that. White pepper begins to take more the lead towards the end of the final third, giving the profile its brightest expression to this point. The draw has been good, a tick firm if anything, but problem-free with plenty of smoke and an even burn line. The transition into the second third is fairly unassuming, though the white pepper certainly commands the attention on each puff. As the Gurkha Treinta Toro progresses, the profile gets a bit fuller and just a touch more robust as black pepper gets back into the profile. There’s a bit of a woody undertone to the profile, more of an accent as opposed to a distinct core flavor, but it seems to steer the cigar in a slightly new direction as the burn line crosses the midway point. The mouth-drying aspect of the cigar seems to have leveled off, and while it still warrants having some water or other beverage nearby, it hasn’t increased much in this section. Past the midway point, the cigar takes a bit of a turn as the natural wood notes that were largely in the background step forward, and with it comes a bit of tanginess that gives the cigar a more distinct flavor, though I’m hesitant to say it’s for the better due to some tanginess. The technical performance is still very good, while the profile has backed off just a touch in flavor intensity and body, with strength beginning to tick up a bit. The final third of the Gurkha Treinta Toro hangs onto much of the same profile that the cigar has shown so far, with black pepper still prominent but not overpowering, and a mix of nuts and woods creating most of the base flavor. There is still a very enjoyable creaminess to the smoke, though it’s more in texture than flavor, and I wouldn’t complain if there was just a bit more of it at times to help further soften the profile while giving it a bit of sweetness as well as increased complexity. A bit of char begins to emerge in the profile, while the black pepper gets sharper, giving the cigar a slightly new profile that is more engaging on the palate but also a bit more agitating. The final inch sees the flavor turn just a bit as the wood gets a touch funky and I start to pick up a bit of sourness from the profile. It’s very subtle and hardly enough to really detract any points, but it serves as a sign that the cigar is coming to its conclusion, wrapping itself up at medium-full in flavor intensity and body, while strength is closer to the medium mark. Some slower smoking rates abate this change just a bit, but it’s inevitable after a certain point. Other than a sporadic touch-up due to some inattention, the technical performance has been outstanding. Between an anniversary cigar and the Gurkha Trienta being the first time that the company has made a cigar with AGANORSA, the stage could be set for some lofty expectations. While the cigar might not be transcendent, it is certainly enjoyable, offering clean and vibrant pepper accenting consistent notes of wood, earth and nuts. Additionally, the profile isn't stagnant, evolving steadily from start to finish and aided by near-perfect construction. While the idea of recommending a Gurkha won't sit well with some readers of this review, I can say without hesitation that the Treinta it worth at least a try, as I didn't find any significant issues with it and was pleasantly surprised by how well it delivered a profile befitting of such an anniversary.