Last year at the 2016 IPCPR Convention and Trade Show, Gurkha released a new infused cigar. Gurkha isn’t new to the liquor infusion game, probably known most famously for the cognac infused His Majesty’s Reserve that retails for $750 and now a bit more.

Besides that one however, there is the regular cognac infused Grand Reserve, the Private Select that uses 7-year aged Ron Abuelo rum, and now the Bourbon Collection.

The Bourbon Collection comes in two sizes: a Churchill (7 x 47) that uses a maduro wrapper and a Toro (6 1/2 x 52) that uses a Connecticut wrapper. The cigars are then infused with bourbon from the Hartfield & Co. distillery located in Paris, Kentucky. Founder and head distiller Andrew Buchanan had this to say in the press release:

When thinking about what Gurkha has meant to the cigar community for decades, it was incredibly humbling when they asked us, a new craft distillery, to join them in this partnership. Combining the legacy of Gurkha Cigars with our handcrafted bourbon made in Bourbon County, KY, was simply too incredible to pass up. In creating our bourbon, we focused on the complexity of the flavor and the experience we wanted when we sat down with a glass of bourbon. A fine cigar company does much the same thing. With two expertly crafted products combined into one, you have the chance to broaden the flavor profile and enhance the overall experience. Partnering with Gurkha Cigars seemed to be a very natural fit. Normally the first thing that I notice about the cigar is something visual, but the Bourbon Collection Churchill definitely leads with its aroma. As soon as I open the seal on the glass tube, I’m greeted with the warm aroma of bourbon and it continues to fill the area around me with that aroma long after it’s been taken out of the tube. The wrapper is bumpy, but smooth and oily, giving it a nice feel. There are a few significant soft spots when squeezed, enough so that it gives me a little trepidation about the burn. Getting back to the aroma coming off the cigar, it is almost all oaky bourbon, with hints of musty wood, earth, vanilla and a general sweetness. The cold draw is very similar, but is much more reminiscent of the leftover bourbon that’s dried in the bottom of a glass. It’s strong, but more of a concentrated taste than the artificial or unrefined bourbon flavor you might taste in those liquor filled chocolates.

Starting into the first third the lit profile is a little harsh, but mostly dominated by the concentrated bourbon note. In the background is a touch of pepper and a little earth, but that’s about it. The soft spots that worried me earlier start to cause some burn issues early on, with a run starting in one section that requires my intervention. After about an inch the profile settles down a little, with less pepper and harshness, while keeping the bourbon note up front followed by some earthiness. The concentrated bourbon note is kind of odd, not completely off putting, but certainly not what I would prefer. As the smoke wafts around me however, the aroma in the air is quite pleasant, with a sweet spice, bourbon and vanilla combination that makes me wish it tasted more like that on the draw. Moving into the second third of the Gurkha Bourbon Collection Churchill Maduro the harshness that had disappeared has joined the profile again, somewhat ruining the bourbon note that was already a little odd. The good news is the burn has evened up, staying fairly straight and producing ash that is a little more dense than before, though it’s still a little flaky. Pepper, earth and vanilla continue to try to check in every once in awhile, giving me hints that they’re still there despite the harsh draw and stronger dominant bourbon note. While the burn has stayed more even, suddenly the cigar just decides to go out, requiring me to relight the entire thing. 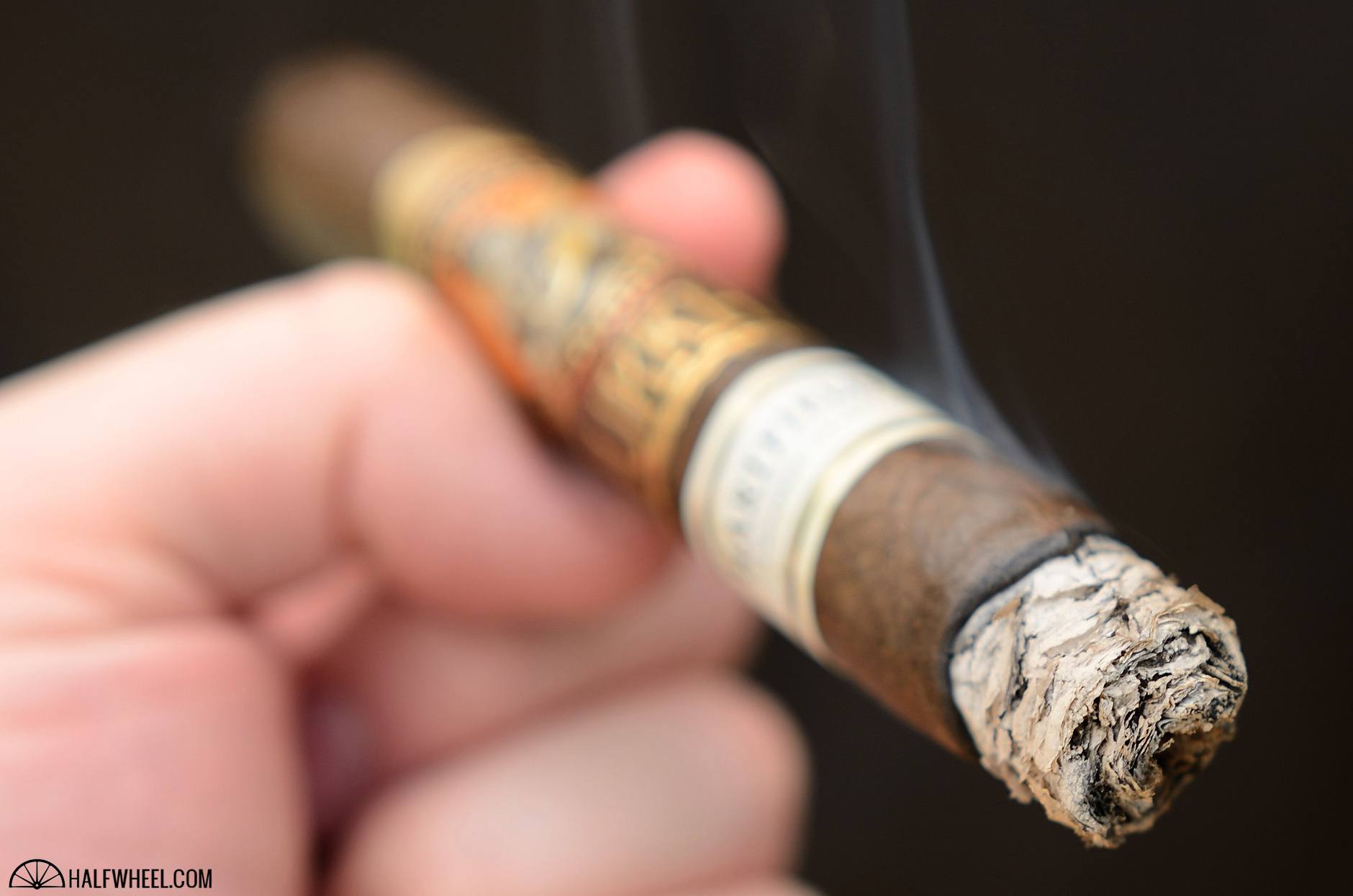 The final third continues with the same harshness and odd bourbon note. Thankfully the harshness has stayed fairly consistent, not growing or getting more intense, but it’s enough to put a damper on the entire thing. The burn has gone back to being somewhat finicky, though it’s at least staying lit. Pepper has grown a bit in strength, but it’s not an ideal addition to the already harsh profile – the sweetness from the cold draw would have been much more preferable to balance out the harshness and earthy undertones. Normally I’m not a huge infused cigar fan, but despite that I was interested in trying the Gurkha Bourbon Collection Churchill Maduro. The aroma off the cigar was pleasant enough, and the cold draw wasn’t necessarily great, but it was pretty good. Unfortunately the lit profile just doesn’t seem to work that well, whether it’s the tobacco that was used or just the infused aroma that tastes odd to me when it burns. The underlying harshness that persisted throughout the majority of the cigar also didn’t do it any favors, but even ignoring that the profile didn’t have much depth to it. I’d be interested in trying one of the Toro Connecticuts just to compare the two, but I think three of the Churchill Maduros were enough for me and I doubt I’ll be seeking these out again.