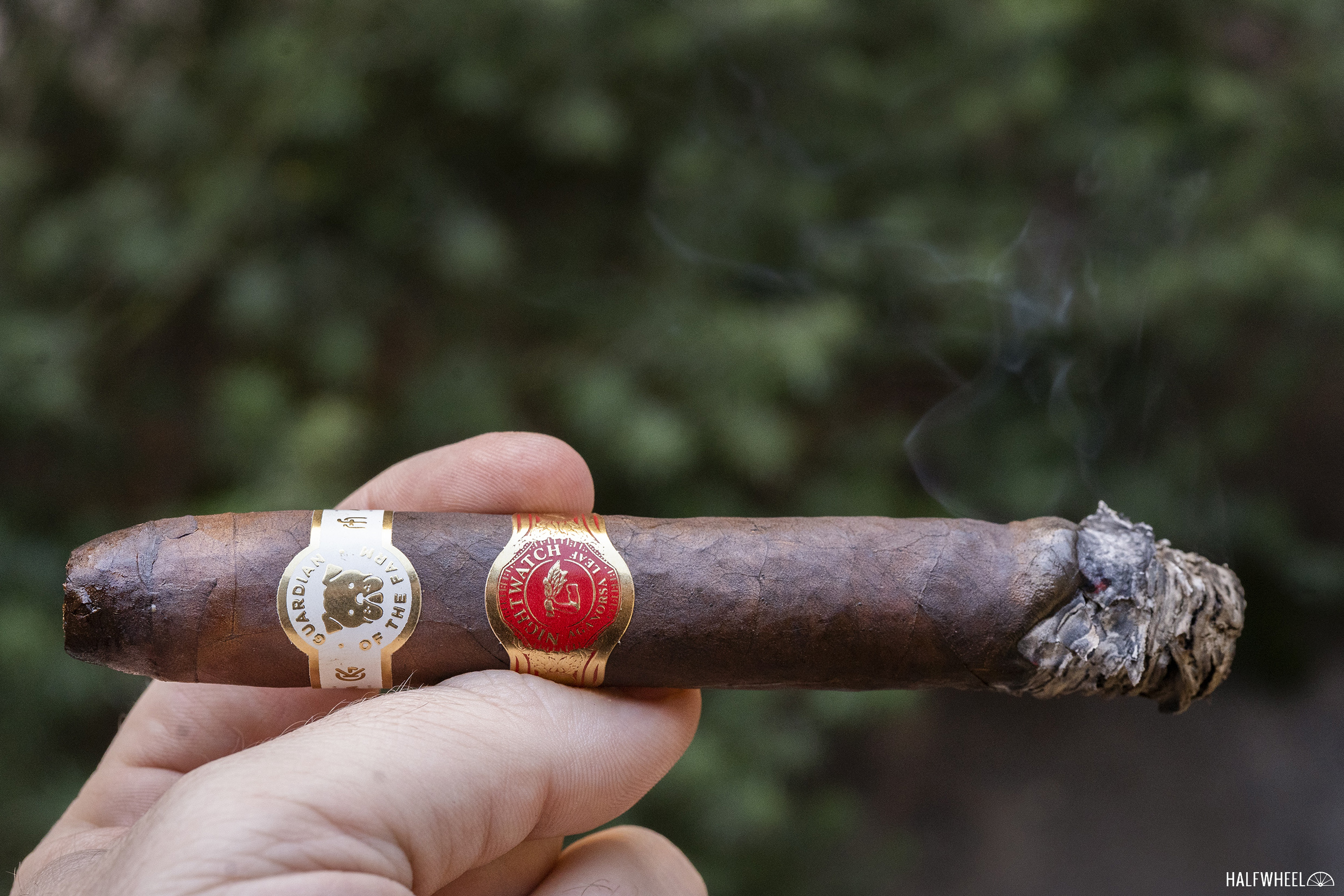 Guardian of the Farm Nightwatch Campeon

There’s a saying in the world of advertising that if you want to sell something, use babies or puppies. While the former isn’t an option when it comes to premium cigars, the latter certainly is.

While AGANORSA Leaf might not have used dogs to sell cigars, it did decide to honor a special group of them with a Guardian of the Farm, a line that honors the dogs that guard the AGANORSA Leaf farms and which debuted in August 2016.

It debuted in four sizes, each named for one of the four dogs who call the company’s farms home.

As is fairly common, after the release of a line, it received a maduro version, this time called the Guardian of the Farm Nightwatch, a name that seemed to both acknowledge the work shift and the darker leaf.

“To make a second blend for Guardian of the Farm and our loyal dogs is a blessing,” said Max Fernández Pujals, in a press release. “Every dog, whether it is one of ours or your own, is commemorated with this cigar.” 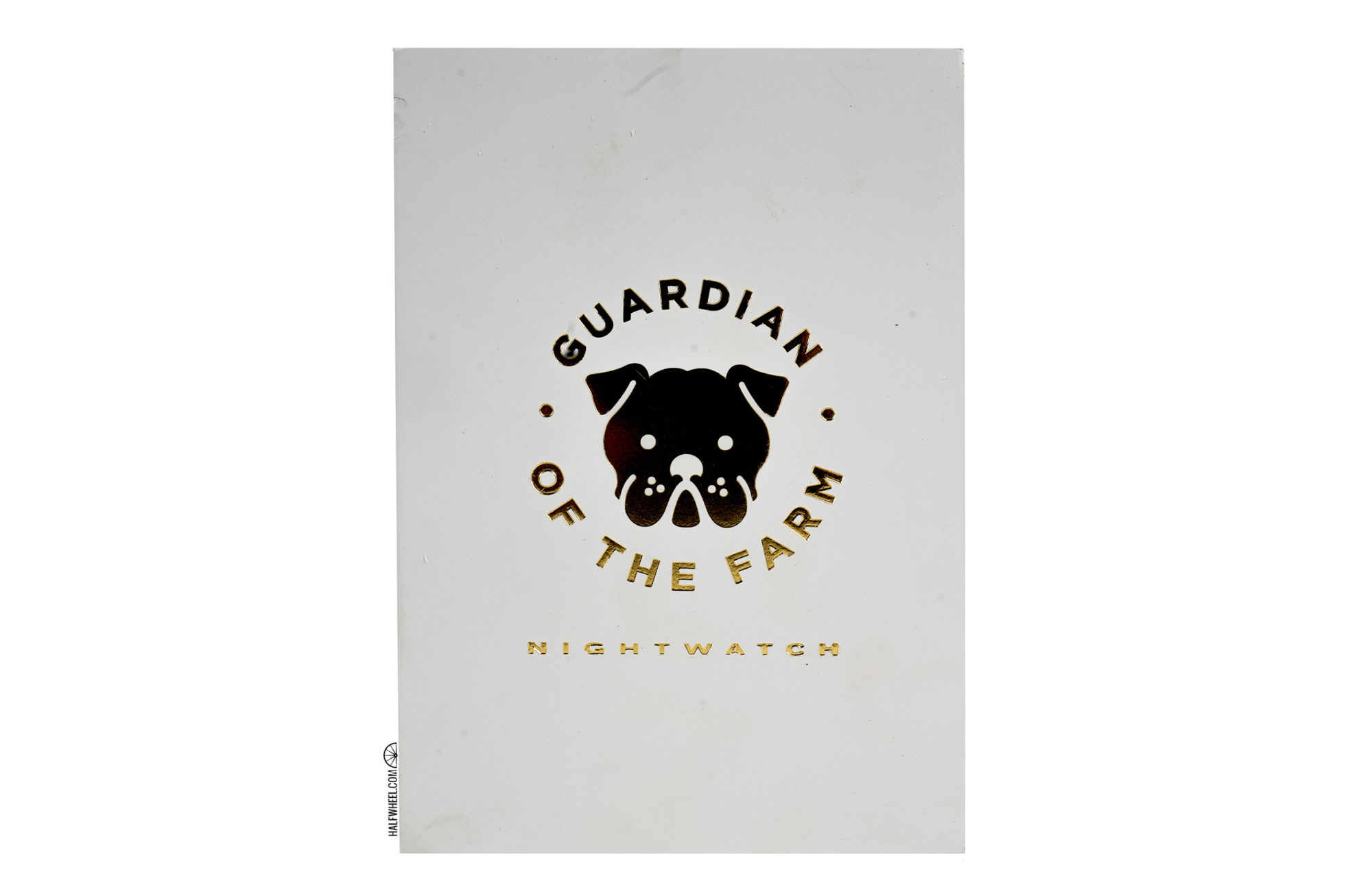 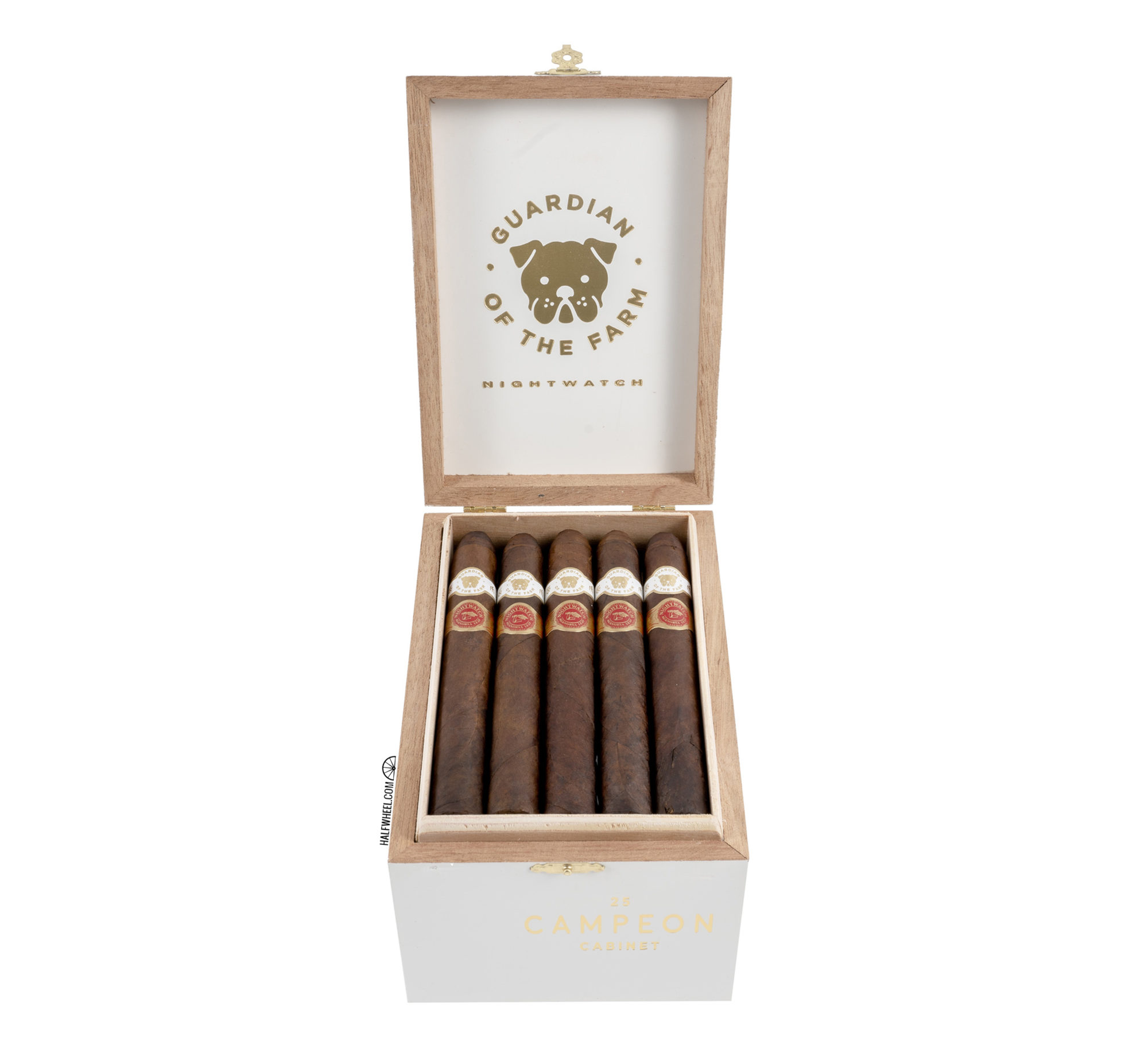 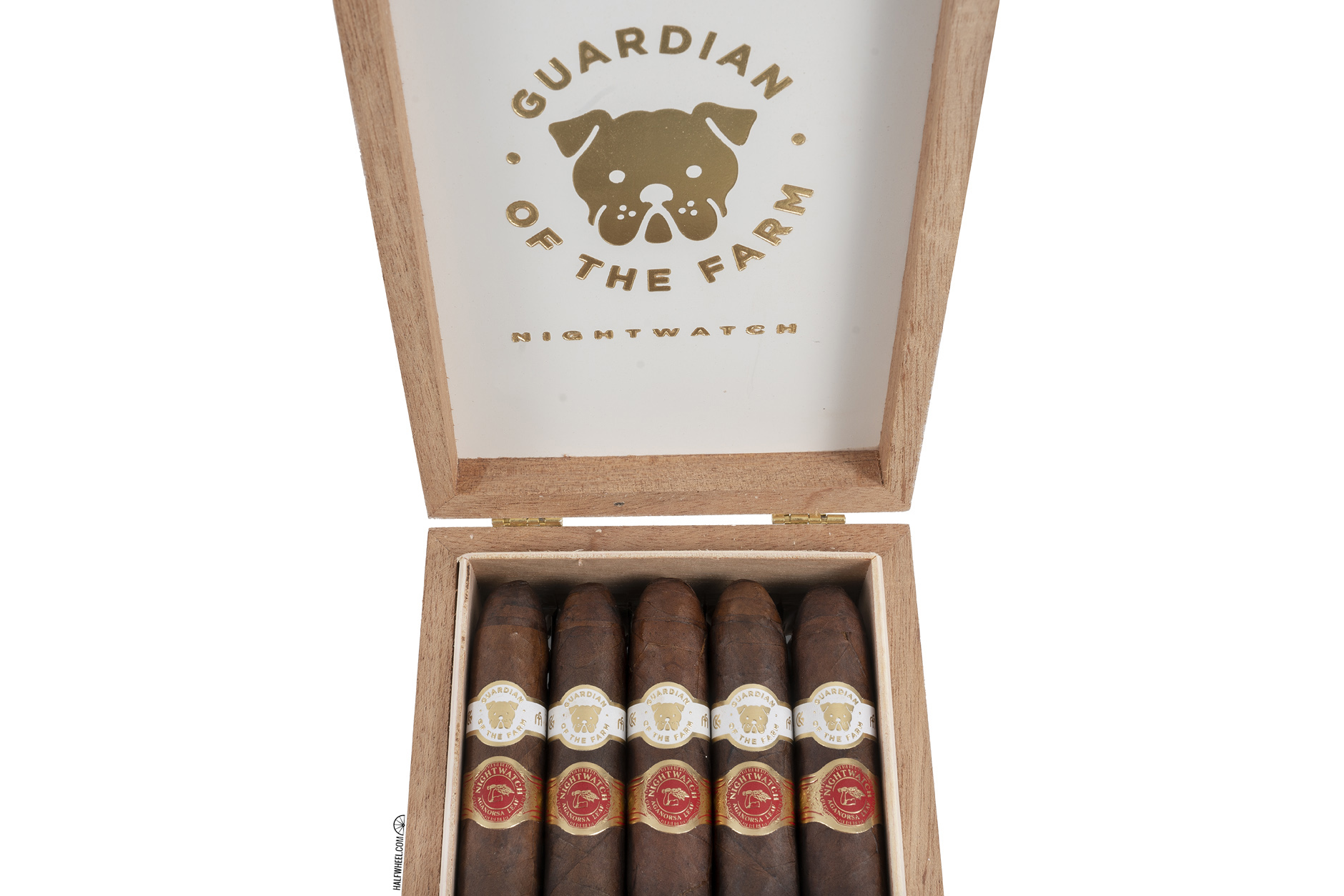 The wrapper leaf on the Guardian of the Farm Nightwatch is a corojo maduro leaf grown in Nicaragua’s Jalapa region. Under that sits a corojo binder that is also from Jalapa and a mix of corojo and criollo fillers grown in Estelí and Jalapa.

The line is offered in four sizes, all of which are regular production.

The Campeon is the lone figurado of the group and offers a 109 style head, which uses a softer taper than a traditional belicoso.

Here’s what I said about the Guardian of the Farm Nightwatch Campeon when I reviewed it in October 2019:

If you’d enjoyed the original Guardian of the Farm—as I did—but felt like it needed a stronger version—which I didn’t—then the Guardian of the Farm Nightwatch should be right up your alley. It’s strong almost immediately out of the gates, and while it takes a few opportunities to let off the gas, it never dips below medium-plus. Earth and pepper are prominent, as is nicotine strength, so should you light one up, be prepared for a strong, flavorful cigar. Personally, I’ve rarely been let down by the original blend, and save for the occasional desire for something stronger, would probably gravitate towards that cigar, but the Nightwatch certainly delivers on almost every front, only stumbling with some sporadic burn and combustion issues. Top it off with a nod to the canines who guard the tobacco that went into this cigar, a fun intangible that adds a bit of a feel-good backstory, and this is a solid cigar worth giving a shot. 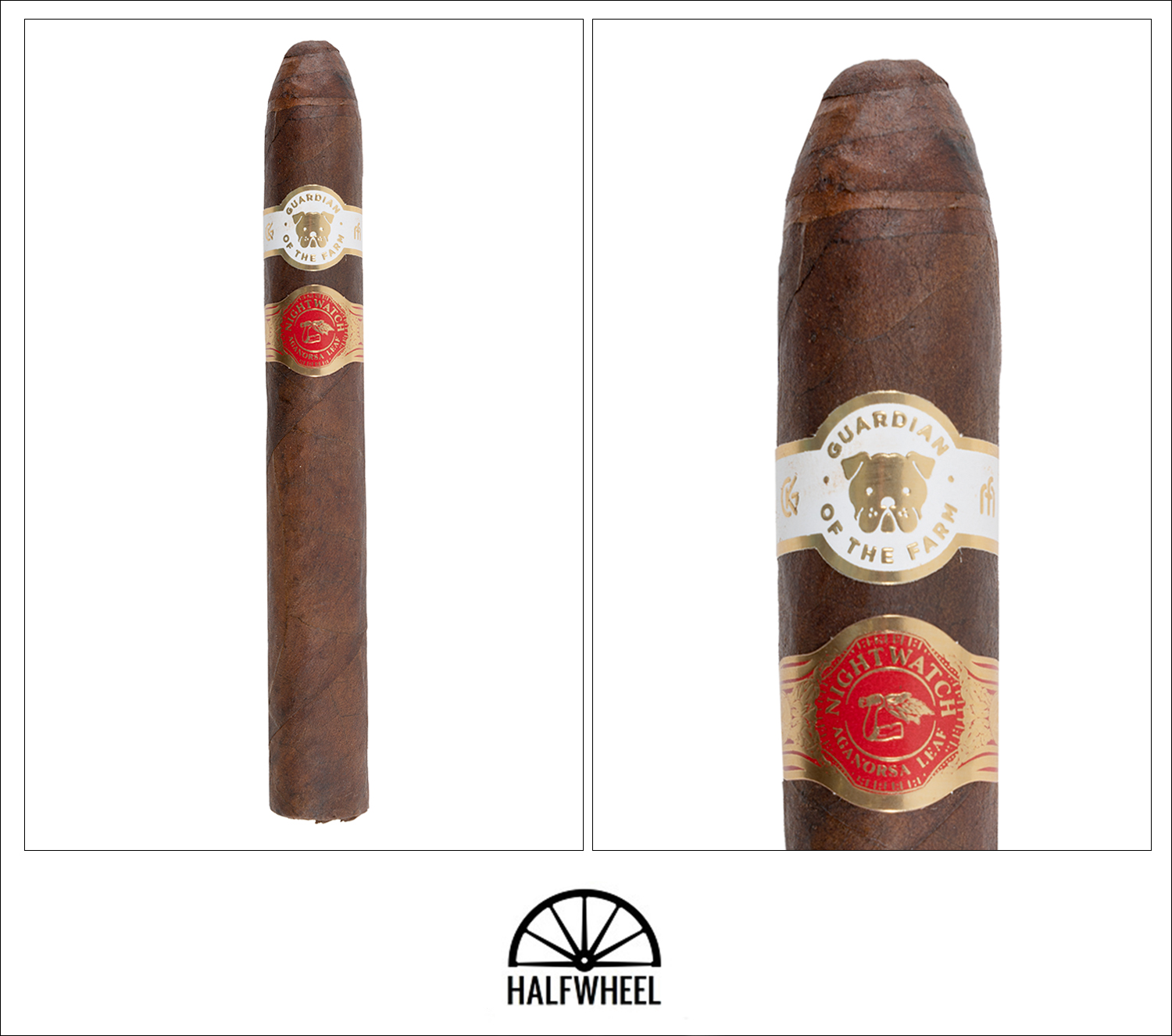 The Guardian of the Farm Nightwatch Campeon has a very interesting visual texture. It’s not only because of its dark brown color and mottling; between the small network of veins and the fact that it seems like the wrapper is draped over a slightly bumpy binder, it is quite eye-catching, if maybe not beauty pageant beautiful. This is furthered by the 109 head that on this sample has a slightly darker hue than the body, showing where the two begin and end. There’s also a small notch of leaf missing along one of the seams, almost as if the leaf split but there isn’t any damage to the wrapper. The covered foot offers a very enjoyable and complex aroma, sweet with thick cherry first before picking up wine barrels. Beef carpaccio and a fragrant upswing at the end of each sniff. The cold draw is smooth and easy, as well as a bit less flavorful. There’s still some sweetness by way of sweetened cranberry juice with a black pepper tingle on the front of the tongue, but between those two is somewhat opaque. The meatiness and wood are still there but dialed back, while there’s an overall smoothness to everything.

The first puff of the Guardian of the Farm Nightwatch Campeon is a bit funky, but it fades away pretty quickly and is replaced by a rich, damp earthiness and a mix of white and black pepper. That funkiness has a bit of chalkiness and a white pepper that is just a bit sharp. While I want to say there are a bit of metals to the flavor, it doesn’t feel like the best term. The cigar burns well early, though as I start thinking of taking the photo for this review, I notice that the burn line isn’t quite even, and appears to be puffing up just a bit right at the edge of the ash. Additionally, the ash is bending backwards when looking at the front of the cigar, all of which makes for an interesting visual. It gets to the point where I decide to give it a quick touchup, which seems to make that leaf puff up a bit just before turning black and burning. Thankfully, it’s not affecting my overall enjoyment of the cigar that much, which has found an earthy base note that is rich with minerals, while pepper has settled down both on the palate and through the nose. After the next small clump of ash drops and the second third begins, the earthiness takes on a much more vibrant expression, drier and more textured than it had been just moments earlier, with dry black pepper coming back as well. While draw, combustion and smoke production are all very good, the burn line and ash are a bit of a mess, including some serious flowering of the ash ahead of the midway point.

The second half of the Guardian of the Farm Nightwatch Campeon carries on with the revitalized profile, turning just a bit chalky and getting progressively drier both on its own and as each puff gets processed by the taste buds. While the initial flavors seem to be good, the finish seems to veer off the path, leaving a bit more harshness in its wake. Combustion also starts to struggle a bit, and it’s not long before I wonder if I should have dry boxed this cigar prior to smoking it, something I rarely do and certainly not something other cigars from my redux humidor have needed. But were I to smoke this exact cigar over, I almost certainly would have pulled it out a few hours prior to smoking it. The transition into the second third sees the profile get much more concentrated and smoky, with the existing flavors getting a bit more concentrated. Some puffs remind me of a smokehouse with this new profile due to its richness and ability to coat the senses. The finish still leaves a bit to be desired, but if it gets in line with the rest of the flavor, could easily deliver some very impressive puffs. Some pronounced black pepper joins in the mix near where the bands would be, with the flavor shifting into full territory, the first time I’d put it in this range thus far. There’s a resurgence of hearty woods in the final inches, with the Campeon showing it has plenty left in it and doesn’t seem to be slowing down. In a continuing evolution of the flavor, the earthiness lightens up a dries out, taking on some notes of clay and brick, which when combined with the white and black pepper, leads to a sense of palate fatigue setting in by the time the cigar approaches its completion. The burn line is still a bit off but combustion and smoke production are both good. Flavor finishes full, body just beneath full, and strength closer to medium-full but enough to leave a lingering feeling below in the chest after two hours and 20 minutes of smoking time.

I didn't look back at my notes prior to smoking this cigar after a year of rest, but it is interesting to see a number of the same sensations still part of the experience. Everything seems amplified in this blend, which should not be surprising given the maduro wrapper and the use of a good amount of corojo tobacco. The result remains a medium-full to full-flavored profile, one that can lead to a bit of palate fatigue but will certainly not leave those in search of lots of taste bud stimulation wanting for more. The burn issues remain. I do wish I would have tried some dry boxing, something I'd still recommend even for one coming right off the shelf. I'm still partial to the original blend, but the Nightwatch certainly delivers on being a fuller-bodied spin on the blend worthy of lighting up when your palate is craving what this profile has to offer.