There are a number of well-known store exclusive series around the country, but one of the more famous is the H-Town Series at Houston-based retailer STOGIES World Class Cigars.

Store co-owner Jorge Ahued is known for his love of the lancero vitola and has commissioned different manufacturers to produce a lancero exclusively for his store starting in late 2013. While the series was originally scheduled to end after just 10 releases, it has continued past that point and now constitutes 13 different cigars, all in the same 7 x 38 lancero vitola.

The newest release in the series is the Guardian of the Farm Guapo H-Town Lancero, a collaboration between two different companies: AGANORSA Leaf and Warped Cigars. Like the other vitolas in the Guardian of the Farm line, the Guapo is named after a specific dog; in this case it is the dog of STOGIES’ longtime manager, Jenny Leigh Hayes. Each cigar retails for $8.90 with only 200 boxes of 10made in the first run. Like the rest of the line, the Guapo H-Town Lancero is a Nicaraguan puro using a corojo 99 wrapper from Jalapa, as well as a corojo 99 binder and filler tobaccos made up of corojo 99 and criollo 98. The cigars were rolled at AGANORSA Leaf’s Tabacos Valle de Jalapa S.A. (TABSA) factory in Estelí, Nicaragua and were put on sale at STOGIES on Nov. 8, 2018.

There have now been 13 releases in the H-Town Series. The Guardian of the Farm H-Town Lancero is visually extremely attractive, with a cinnamon brown wrapper that is relatively smooth to the touch, albeit with very little oil present. It is a bit harder than I expected when squeezed—although not hard enough for me to think there will be any issues in that regard—and the covered foot is a nice touch. Aroma from the wrapper is a combination of leather, manure, sweet cedar and vanilla beans while the cold draw brings flavors of peanut shells, dark chocolate, earth, hay, leather and slight maple sweetness.

Toasting the foot of the Guardian of the Farm H-Town Lancero brings some immediate flavors to the forefront of the profile, including a dominant combination of cinnamon and sweet cedar, followed by notes of leather, earth, baker’s spices, creamy almonds and rich espresso beans. There is a significant and somewhat surprising amount of spice on my tongue for the first 10 puffs or so, although it starts to recede a bit after that. I also pick up some nice white pepper and slight maple sweetness pulled over from the cold draw on the retrohale, but neither are overly strong just yet. While the draw is excellent, nearly out of the gate the burn has issues. Strength-wise, the Guapo easily hits a point between mild and medium as the first third comes to an end, but it does seem to be continuing to increase. Although the profile becomes noticeably more creamy as the second third of the Guardian of the Farm H-Town Lancero begins, the main flavors remain the same: a combination of sweet cedar and cinnamon. Other notes flit in and out in various strengths as well, including fresh ground coffee, hay, yeast, leather, earth and a touch of floral to bring up the rear. The maple sweetness from the first third has increased in strength enough to really affect the profile, while the spice that was so prevalent on my tongue has thankfully decreased enough that I barely notice it. There is still some white pepper on the retrohale as well, but it seems content to stay where it is, neither increasing or decreasing in strength. Construction-wise, the Guardian of the Farm Lancero still features a burn that is far from razor sharp but also far from needing attention, while the draw remains excellent. Compared to the first third, the overall strength has increased, but the cigar still fails to reach the medium mark by the time the second third comes to an end. 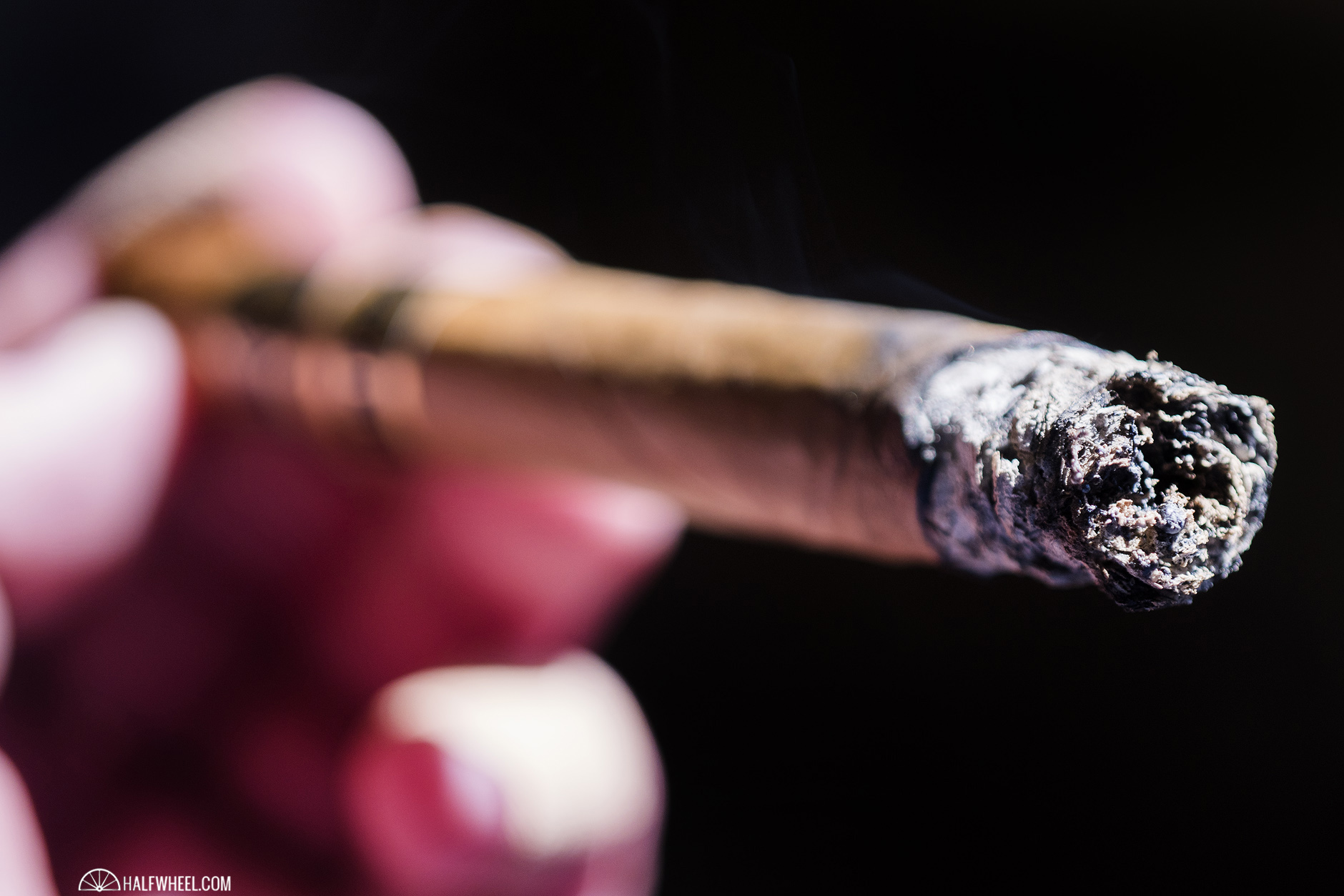 The final third of the Guardian of the Farm H-Town Lancero is a virtual carbon copy of the second third: the same creaminess in the profile as well as the same sweet cedar and cinnamon combination as the dominant note. Additional flavors include bitter espresso, cocoa nibs, hay, anise and leather on the palate as well as white pepper and maple sweetness on the retrohale, all of which show no signs of disappearing anytime soon. Finally, both the draw and burn continue to give me no major issues, while the strength finally reaches the medium point—and even goes a bit past that—before I put the nub down with a little less than an inch to go. The H-Town Series has featured some extremely enjoyable cigars over the years and at its best, the Guardian of the Farm Guapo H-Town Lancero can hold its own against most of them. Unfortunately, while two of the samples performed extremely well in just about all aspects, the third featured a tight draw that really affected not only the burn but also the profile, which was nowhere near as complex or as flavorful. It is unfortunate when poor construction brings down a score significantly, but that is exactly what happened with this cigar: having said that, when it is good, the Guapo H-Town Lancero is a nice addition to the H-Town Series and is well worth tracking down.