Once a new cigar line debuts, it’s often not long after that a new size will be added. In the case of the Guardian of the Farm series from AGANORSA Leaf, in less than six months after its 2018 debut the line added three new sizes, although all of them were single store exclusives. One of them—the Guardian of the Farm Claude Le Chien for SmallBatchCigar.com—is already back with its second installment, this time with a modified blend and updated bands.

Like the rest of the line, this vitola is named for a dog, specifically Claude, a blue French bulldog owned by Andrew Considine of SmallBatchCigar.com, the online arm of Maxamar Ultimate Cigars, which is based in Orange, Calif. The four other sizes that are not store exclusives are named for the dogs that guard the AGANORSA Leaf farms: Rambo, Campeon, JJ and Orpheus.

It returns in its short robusto vitola that measures 4 1/2 x 48 and gets a pretty extreme box press. Le Chien is still a Nicaraguan puro, with a corojo rosado wrapper atop a corojo 99 binder and filler, with criollo 98 joining the filler as well. The most notable difference with this new second release of the Claude Le Chien is that the filler contains a criollo 98 leaf that is five-years-old, which corresponds to how old Claude is.

Considine told halfwheel that he is planning to release the cigar every year, with at least one of the tobaccos corresponding to Claude’s age.

There’s one other difference between the two releases: the secondary band. The 2019 version has a new design that extends around the band, while the 2018 version did not have the full embossing. 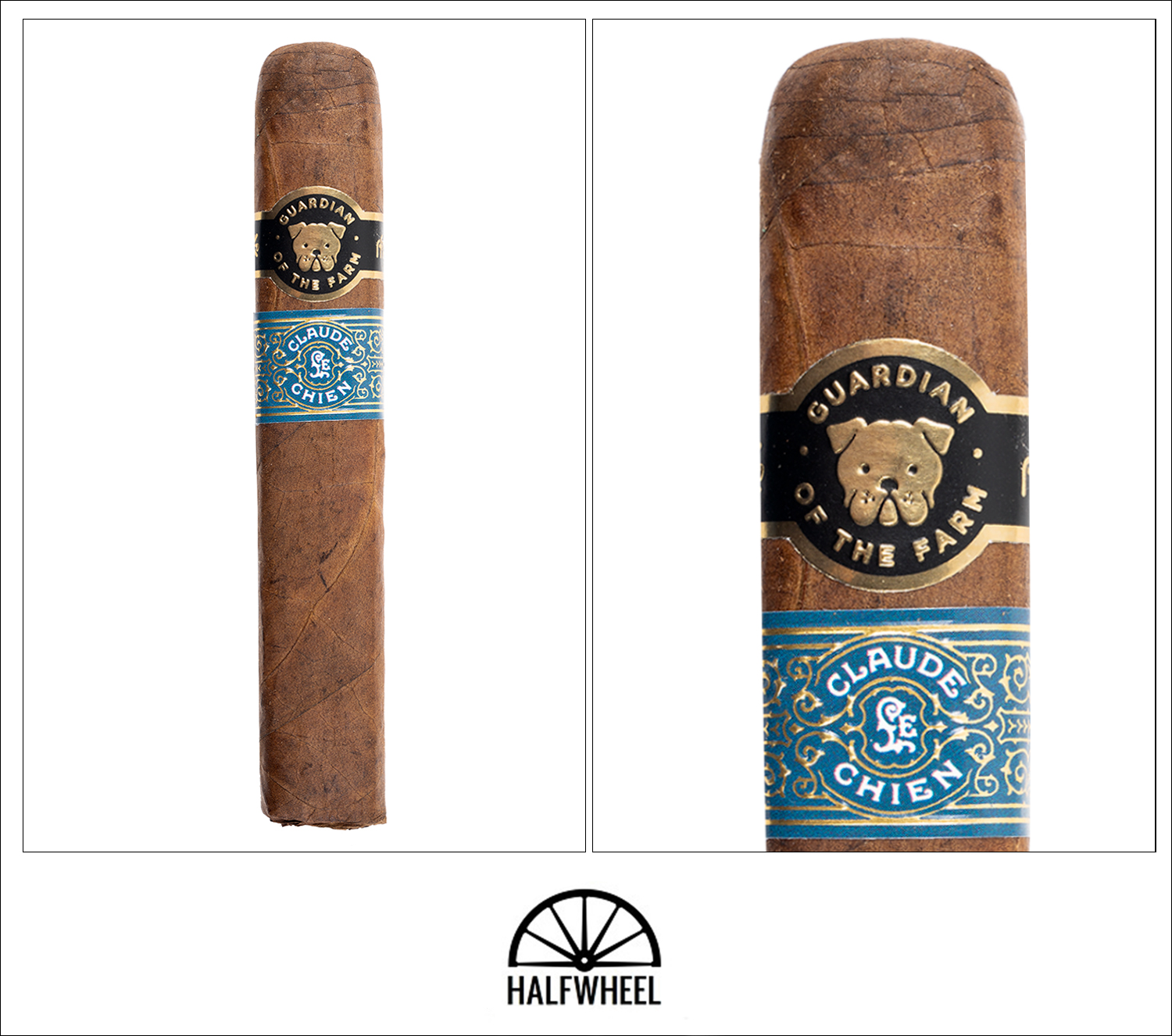 Between its length and the fairly extreme box-press, this second installment of the Guardian of the Farm Claude Le Chien its certainly visually distinctive. It’s a fairy firm cigar, and definitely firmer than most box-pressed cigars, which seem to have a bit more of a firm pillow feel. There’s some oil on the wrapper, while its color is a medium shade of brown, mottled in spots but with a fairly tight range of hues. The partially covered foot is open just enough to reveal aromas of Reese’s Peanut Butter Cups, though neither peanut butter or chocolate on their own, as well as earth, brown sugar and some coffee grounds. There’s a bit of pepper but I find myself having to work to find it, that is to say really sniffing the tobacco. The cold draw is firmer and sweeter than I expected, reminding me of cool apple cider and a bit more of the Reese’s flavor, though very little pepper is part of the flavor.

If the foot of the cigar was covered with the intent of delivering a vibrant starting note, consider it mission accomplished. The Guardian of the Farm Claude Le Chien opens up with much more pepper than the pre-light experiences would have suggested, though it comes packaged in the peanut butter part of the Reese’s flavor, as there’s no appreciable chocolate here. Through the nose there is black pepper that begins to tingle the nostrils, significant if not dominant in intensity. A bit of oily sweetness comes in before the half-inch mark, and I keep finding my thoughts drawn back to the kind of peanut butter found in chocolate candy. The tail end of the first third sees the vibrancy of the smoke through the nose really come alive, with white pepper picking up and teeing up what could be a progression in the coming section. The draw, smoke production and burn line are all good, with the flavor around medium but inching up while strength is a tick below medium so far. There’s a fragrant wood note that hits my nostrils while the cigar rests and I type the previous sentence; it has some sweetness of cedar though that doesn’t feel like a perfect descriptor. As noted earlier, the white pepper is definitely increasing, and I don’t even have to retrohale to get the effect. By the midpoint the cigar is at its brightest point, with incredibly vibrant white pepper leading the charge. There’s not much behind it, however, with just bits of wood, earth and coffee depending on the sample and the puff, so for as good as the first impression of the puff is, the finish struggles to match up with it. Even with that discrepancy, this cigar shines with its aroma, a sweet smoke that alternates between cedar and barnyard, with a bit of a floral note mixed in as well. One sample also introduces a slightly sweet, slightly oily and distinctly nutty flavor that needs some attention to stand out, but when given that attention, the results are very good. The first touches of harshness begin to emerge, though in varying amounts depending on the sample. The draw is smooth if occasionally just a tick firm, while smoke production is sufficient and combustion is solid. While the pepper came alive in the second third, it starts the final third by getting a bit too big for the profile and too intense for my palate. It’s not completely nor constantly going overboard, but there are spots where it is eliciting some irritation in the back of the throat. In that same vein, the supporting notes behind the pepper have begun to fill out; black pepper, earth and a bit of black coffee deliver a familiar robustness and a bit more irritation, though it’s manageable for the time being. The cigar’s aroma continues to shine, with a bit of orange marmalade now a part of it, and its sweetness finds ways to cut through the ambient air and get right into my nostrils. A bit of a warm, slightly over-baked pretzel comes into the mix during the final inch or so, giving the Guardian of the Farm Claude Le Chien one more flavor before it’s time to put the cigar to rest, and that’s with the pepper still kicking. The technical performance was solid from start to finish, while the flavor wraps up at medium-plus, strength a bit under medium, and body around medium-plus. Much like I’m sure Claude is a very good dog, this second iteration of the Guardian of the Farm Claude Le Chien is a very good cigar. Drawing on AGANORSA Leaf tobacco, it has impressive complexity and progression even in this smaller vitola, starting strong and showing that it can evolve and stay interesting until the very final puffs. Each sample came with a bit of irritation to the throat in the second half, something that held it back a bit but nothing that was strong enough to warrant deducting points. The technical performance was problem-free, and with no nicotine buzz to speak of, the finish of each sample had me considering going for another one.