As part of its new releases showed off at this year’s IPCPR Convention & Trade Show, Warped Cigars rolled out a new line called Guardian of the Farm, a collaboration release with Casa Fernández. 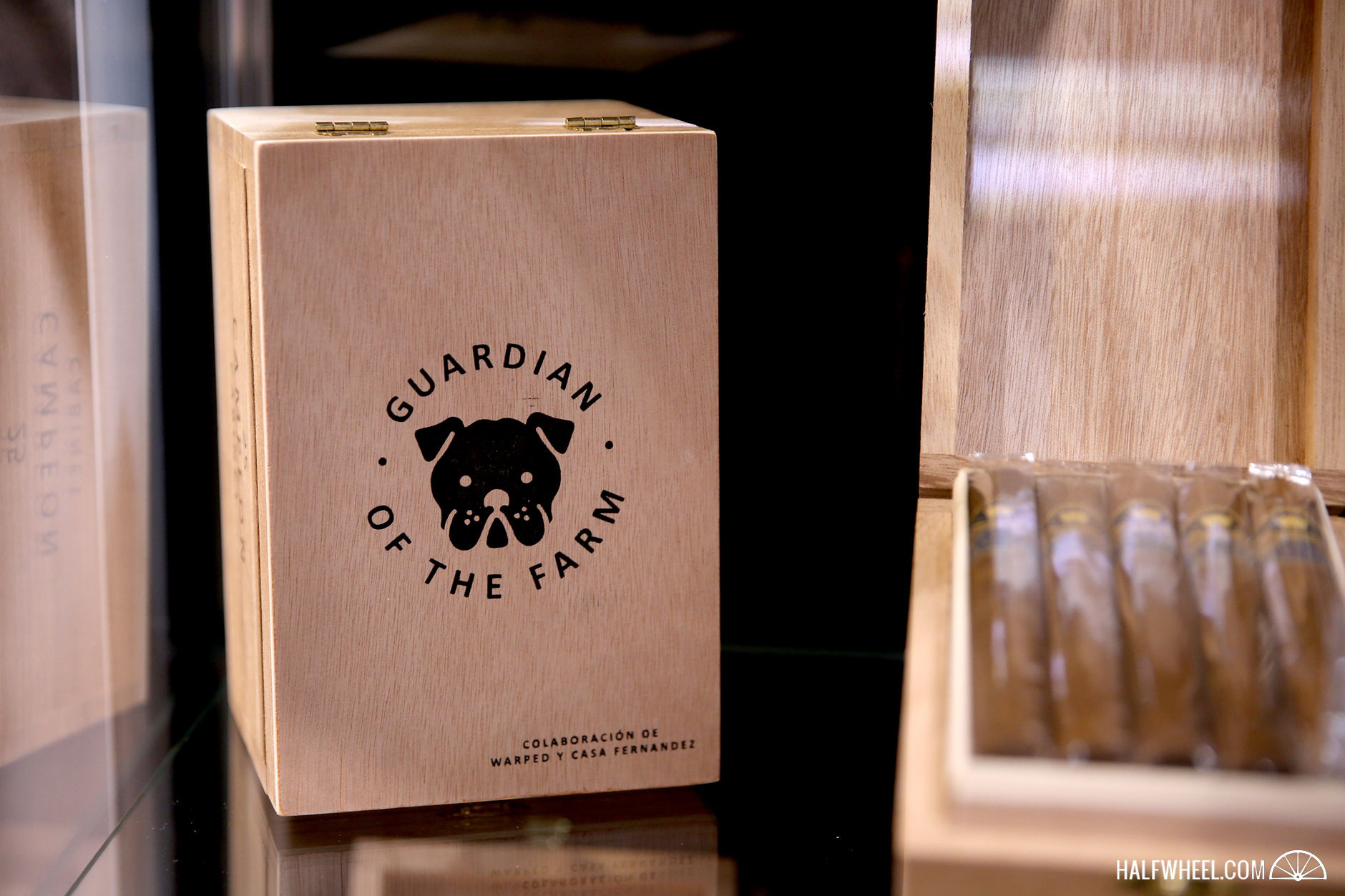 It’s the second collaboration cigar from the two companies, joining Futuro, which was released at the 2015 IPCPR Convention & Trade Show. That cigar came out of an idea between Kyle Gellis of Warped and Max Fernández of AGANORSA, with each picking a size for the cigar’s release. Additionally, both Warped and Casa Fernández handled Futuro’s distribution. 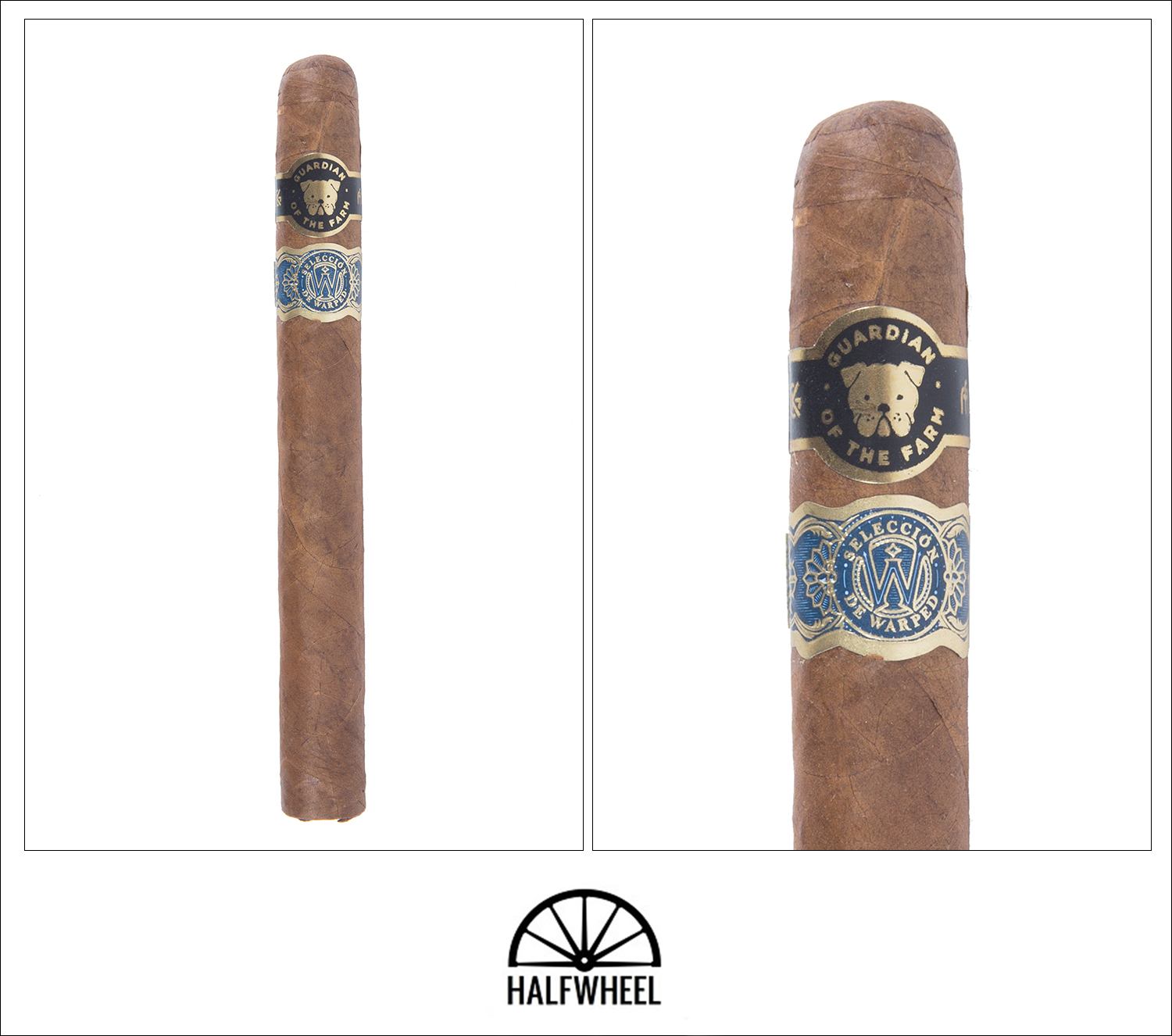 The Apollo comes in the wonderfully slender corona vitola though visually seems a bit slimmer than a typical 44 ring gauge. The wrapper is a veiny and mottled leaf with a shade that is hard to pin down, other than falling into the general colorado category and having a matte finish. The closed foot is generally executed quite well, as the excess tobacco is gathered tidily though not always in a quantity sufficient to form a complete covering. Above the foot the roll is generally good with flat seams and a cleanly applied cap; only a slight bump disrupts the straight line ideal of the cylinder. The aroma from the foot varies a bit; the first and third are  cool and creamy, not offering much in the way of distinct flavors but rather an ice-cream parlor like encounter, while the second is woody and slightly pepper driven, offering a dry and tingling sensation for the nose. Mild and creamy as well is the cold draw, with a sensation of cool, plain coffee creamer the first thing that I detect. I also get a very faint hint at orange sherbet, followed by a slight cedar undertone.

As to be expected with a covered foot cigar, the loose wrapper of the Apollo reacts a bit more visually to the flame than an uncovered foot would, swelling  before flaking off either into your lap or the breeze. There’s a good bit of pepper and sweet cream to be found in the first puffs as plenty of smoke coats the senses, and some early retrohales provide a light bodied but peppery tingle to the nostrils. The ash hangs on well, reaching over an inch in length before finally letting go, and the burn in the first 30 minutes has been dead-on even with plenty of smoke that falls on the thin side of texture but is more than capable of delivering plenty of pepper. After a fairly flavorful beginning, the flavor from the Apollo takes a bit of a break, retreating into a pepper-driven neutral note that is best described as cereal grains, wheat and dry wood, an enjoyable if uncomplying flavor that seems to best serve as a pairing canvas for spirits than a blend conveying its own flavors. 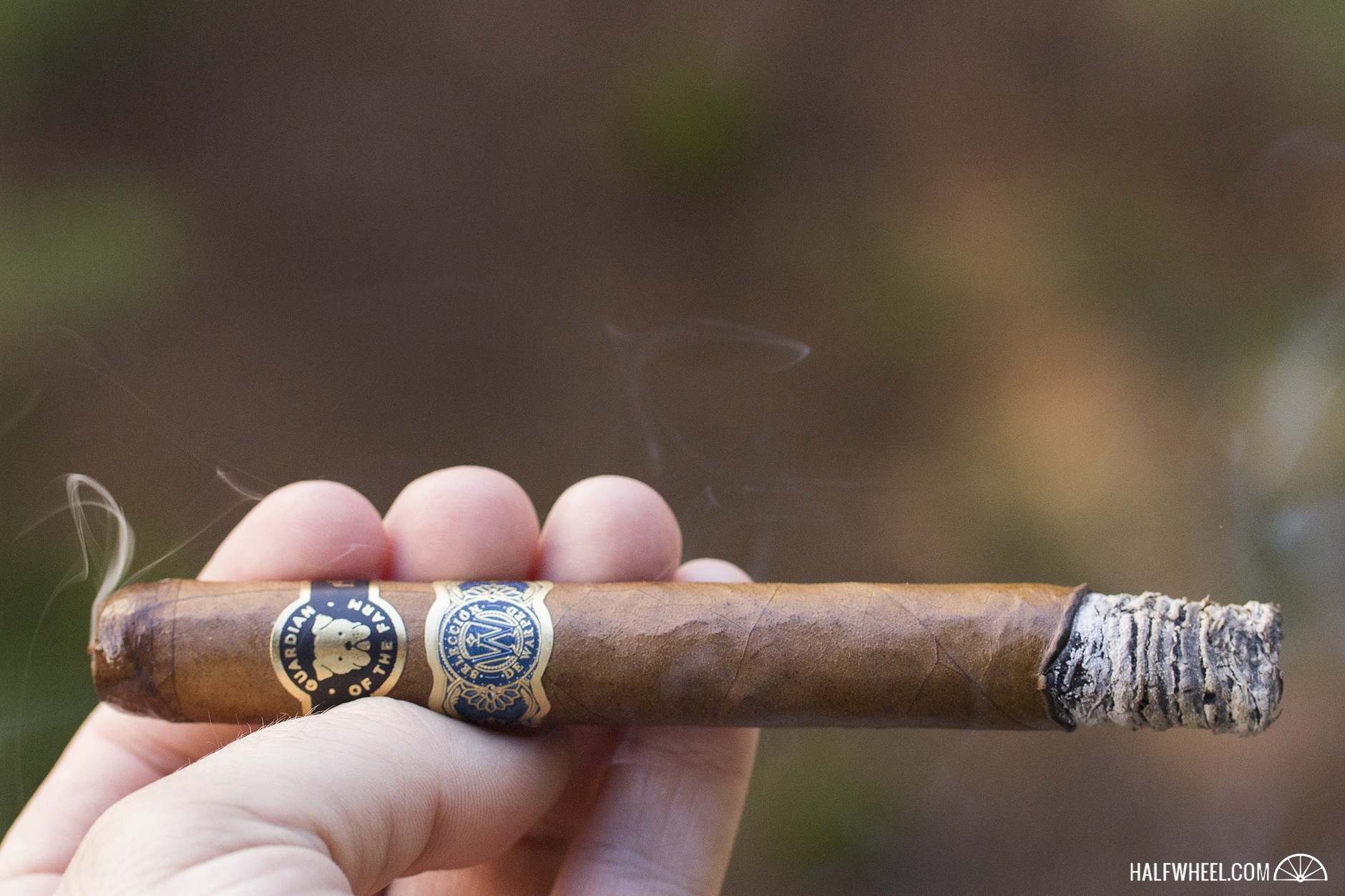 The Apollo doesn’t undergo many changes in the early goings of the second third, but when a touch of warm sweetness comes along just ahead of the midpoint, it’s quite a step forward. The aroma suddenly begins to offer a warm gingersnap smell, while the palate begins to get a warm vanilla latte note, though the coffee component is a supporting note at best, leaving most of the flavor to the flavored creaminess that tries to fend off the cigar’s overall dry nature. Retrohales continue to be the more stimulating of ways to experience the Apollo, as pepper remains bright while the smoke also carries a bit of wood, chalk and mineral-laden earth. By the midpoint, the pepper has settled on a strength that is a bit above medium, and it’s more potent with the tingle than with outright strength, leaving a finish that is almost equal parts earth and wood, with the sweetness having almost completely departed, a trend that continues for the rest of this section. Every aspect of the cigar’s technical performance is spot on as well, as the draw and burn are great and smoke production is abundant. 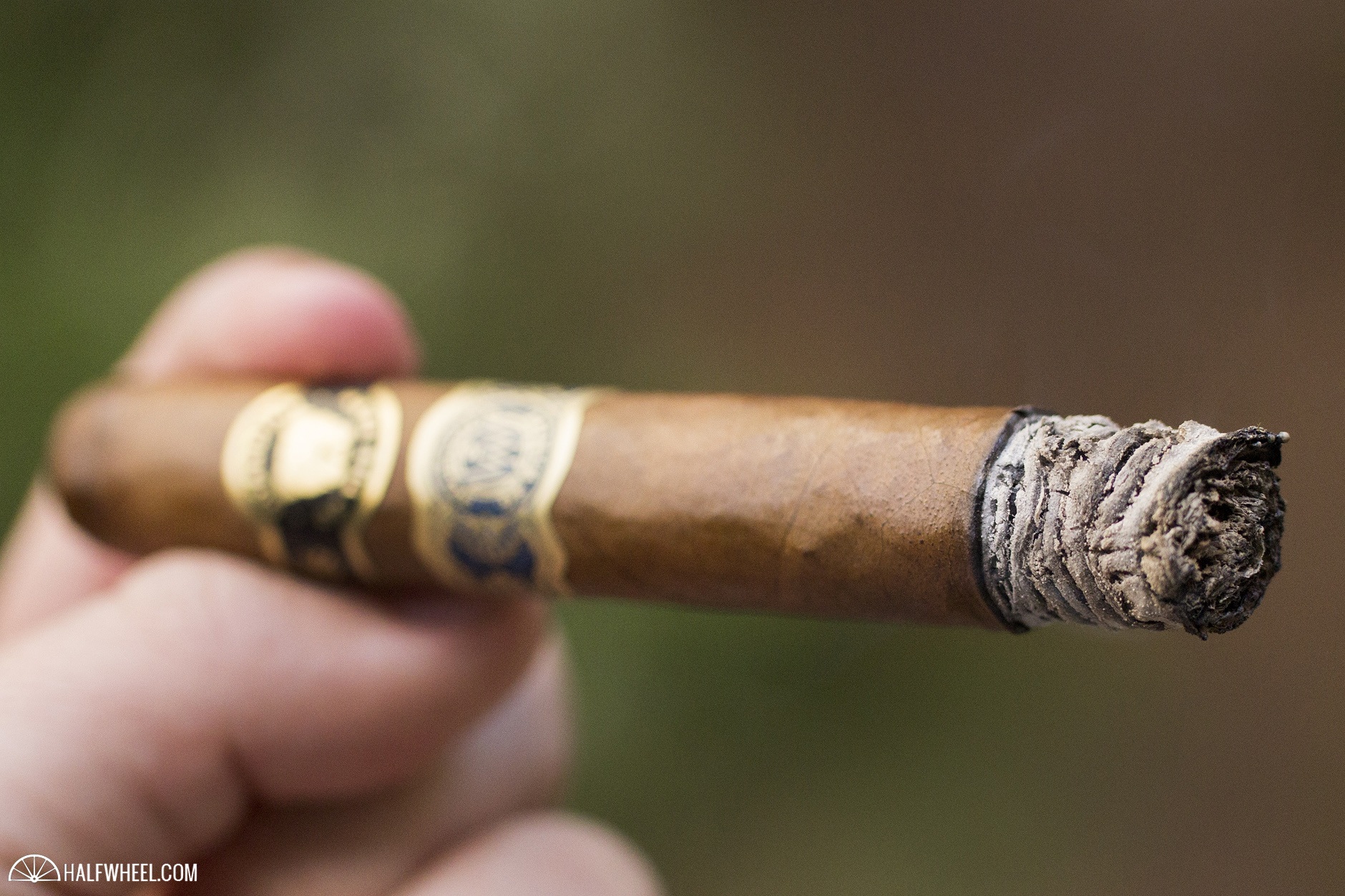 There still isn’t much in the way of changes from the Guardian of the Farm, as it has honed in on a note that has dominated much of the cigar to this point, though small shifts make the texture of the smoke a bit more granular at times and there are spots where some moist cake donut wedges itself in to moisten the palate and provide a bit more of a succulent flavor. Pepper remains constant in presence but varies its intensity, which its punch felt most distinctly through the nose, a part of smoking the Apollo that must be done on regular intervals to get the cigar’s full experience. 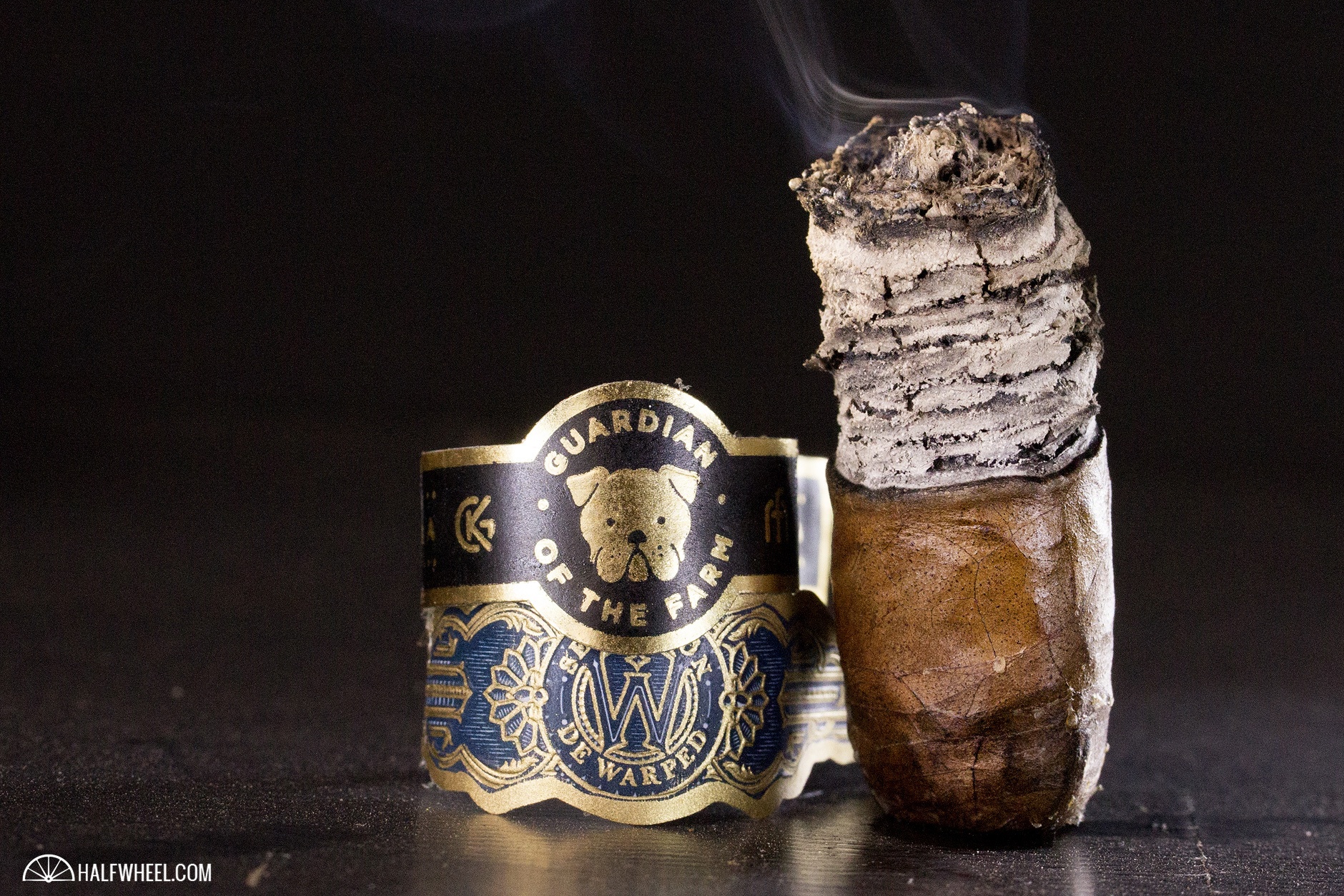 While it might not be the most flavorful or adventurous cigar around, the Guardian of the Farm Apollo Selección de Warped offers a good bit to be enjoyed, including consistent flavors from start to finish and a duality between retrohale and palate that is how the cigar shows it full range. I'd love to do a head-to-head on the three sizes, as while the Apollo gets the "Selección de Warped" designation and less production, the bigger ring gauge Campeon may well be where my preferences for this blend lie.