Last month, GTO Cigars debuted its newest line during an event at Cigars & More in Birmingham, Ala. Named La Cura—which translates to The Cure from Spanish—the new blend is a Dominican puro that incorporates a broadleaf wrapper as well as proprietary tobacco that has been aged for 10 years in the binder and filler.

The founder of the GTO Cigars brand is Dr. Oscar Rodriguez, so it is no surprise that the logo was inspired by Caduceus—otherwise known as the staff of Hermes, emissary and messenger of the gods in Greek mythology—which is used in the U.S. to depict medicine. However, Rodriguez modified the well-known original image by changing the wings into tobacco leaves.

The GTO La Cura was released in two different vitolas. Each vitola is packaged in 24-count boxes with only 2,400 total cigars released and both were formally introduced at the aforementioned event that took place on June 11. Boxes then began shipping to other retailers at the end of that same week. 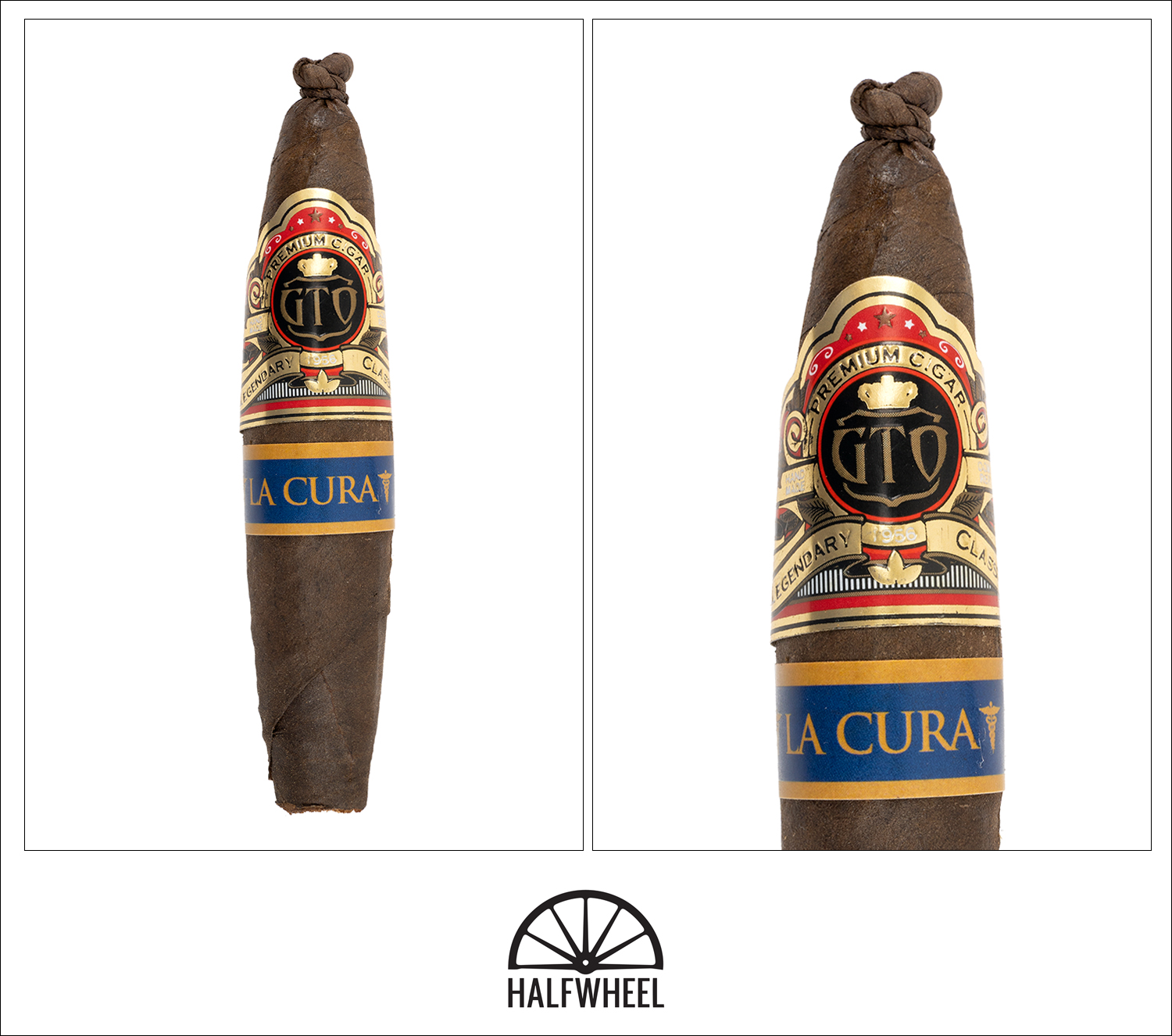 Visually, the GTO La Cura is an interesting looking vitola, essentially a small double perfecto covered in a dark espresso brown wrapper that is extremely rustic to the touch with quite a bit of tooth, bumps and protruding veins. The cigar is also quite firm when squeezed and the pigtail on the cap is a nice touch. Aroma from the wrapper and foot is a combination of strong earth, sweet leather, pungent barnyard, black pepper and dark chocolate, while the cold draw follows the aroma closely with notes of earth, leather, hay, cedar, powdery cocoa nibs, and slight vanilla sweetness along with a touch of spice.

Due in some part to the small size of the foot, the GTO lights up with no trouble, bringing immediate flavors of strong earth and leather followed by lesser notes of generic nuts, hay, cedar, dark chocolate and slight floral. In addition, there is some aggressive spice on my tongue that remains for quite a while as well as cayenne pepper on the retrohale that combines nicely with a slight vanilla sweetness. There is plenty of dense white smoke, the draw is excellent, and the burn is close to straight, albeit far from razor sharp. The overall strength starts off between mild and medium but increases noticeably before ending a bit closer to the medium mark by the time the first third ends.

While both the spice on my tongue and the cayenne pepper on the retrohale seem to decrease during the second third of LA Cura, the major flavors in the profile continue to be the same gritty earth and leather combination. Those flavors are followed closely by notes of bitter espresso, cedar, floral, cinnamon, hay and bread that flit in and out in various amounts, while the vanilla sweetness on the retrohale remains too faint to have any major impact on the profile. In terms of construction, the burn on the GTO La Cura has evened up nicely while the draw continues to impress and the smoke production has no major changes. In addition, the strength level has seemingly stalled, ending the second third still just short of medium. Although it is not exactly a surprise, it is a bit disappointing when the extremely familiar combination of strong earth and leather continue to dominate the final third of the La Cura, although a stronger freshly-brewed espresso note seems to be increasing in strength as the third burns down. Both the black pepper on the retrohale and the spice on my tongue have calmed down significantly, which allows flavors of bread, generic citrus, cinnamon, cedar, nuts and baker’s spices to ebb and flow. Unfortunately, the dissipating spice and pepper have almost no effect on the strength of the vanilla sweetness that is present on the retrohale, which continues to be strong enough to place, but too faint to really have an impact. Both the burn and draw continue to give me no issues whatsoever until the end of the stick, while the overall strength easily hits a solid medium by the time I put the nub down with a bit less than an inch remaining. Having not smoked a GTO Cigars release prior to the La Cura, I was essentially going into this review blind. What I found was a cigar featuring an extremely linear profile that basically consisted of only three major components: earth, leather and cayenne pepper, as well as a very small amount of vanilla sweetness on the retrohale. With that said, the overall construction was good—somewhat of a rarity when talking about a fat double perfecto vitola—and the solid medium strength was well-integrated. Having an extremely straightforward profile—one that I found boring— is not a detriment if you are craving stability, but if you are looking for any significant amount of change, nuance or flavor transitions of any sort, you won’t find them here.