With the IPCPR new release picture coming more into focus, there has been confirmation that The Griffin’s will release the Special Edition XVIII at the upcoming trade show. 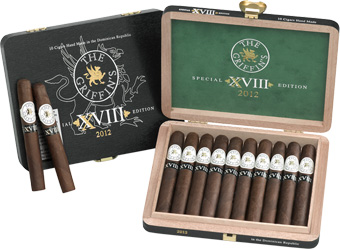 Manuel Fröhlich noted that the cigar hit Swiss retailers on Wednesday, July 11, and is currently available online via Swiss retailer Premium-cigars.ch. The cigar has a box price of SFr. 120.00, or US$122.35.

According to the release notes from The Griffin’s (translated from German via Google Translate):

The world’s most popular and prestigious Griffin’s Special Edition was designed in 2012 in a black wooden box with printed in elegant moss green felt lining on the inside cover. This year’s edition is very popular, something bigger, “Corona Extra” format available. The insole of specially long mounted strong Piloto, San Vicente and Criollo tobaccos has been refined with a share of spicy Nicaraguan Jalapa Especial and aromatic Peruvian Pelo de Oro tobacco. The mild Olor binder and the grand finale – the sun ripened Ecuador Special Sungrown cover – give this full-bodied cigar so-popular, multi-faceted and round Griffin’s smoke flavor that leaves you wanting more. The Griffin’s Special Edition 2012 is available in limited quantity of 3,000 casket available worldwide.

The Corona Extra vitola for The Griffin’s Special Edition XVIII measures approximately 5.5 x 46. The Griffin’s is owned by Davidoff of Geneva.

In addition, The Griffin’s will also be releasing some prior year LE’s that have been held in the warehouse, though specifics as to years and quantities available were not made available.