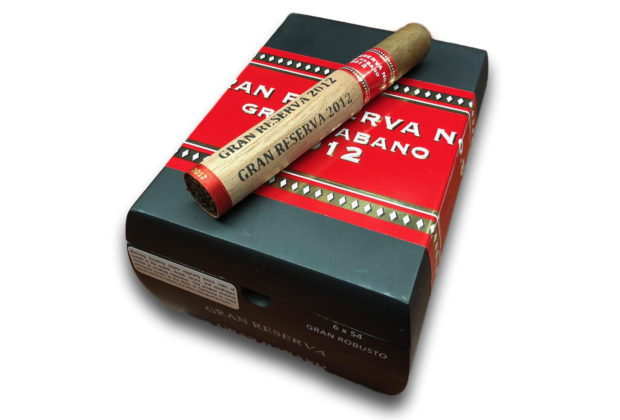 The newest Corojo #5 Gran Reserva from Gran Habano is ready to hit store shelves, as today the company announced the cigar’s release. The Gran Habano Gran Reserva collection are made using the top 10% best leaf from the yearly crop and aged for an extra seven to eight years prior to the cigar being rolled, according to a statement from the company. Following the rolling of the cigars, they are then aged for an additional period of four to six years.

In the case of the Gran Habano Corojo #5 Gran Reserva 2012, the cigars received an additional three years of aging, longer than any other prior Gran Reserva release.

Even with the aging, it’s still billed as a full-bodied blend, with a Nicaraguan wrapper and binder covering a filler of Nicaraguan and Costa Rican tobacco. The line is available in five sizes, all in 20-count boxes and produced by the G.R. Tabacaleras Unidas S.A. factory in Honduras:

The company says that the blend offers “a bold new experience in full-bodied premium cigars made with vintage tobaccos,” with a smoke that is smooth, earthy and spicy, accompanied by notes of sweet wood and espresso.

While specific production numbers have not been released, the company estimates the total production will be just over 200,000 cigars.