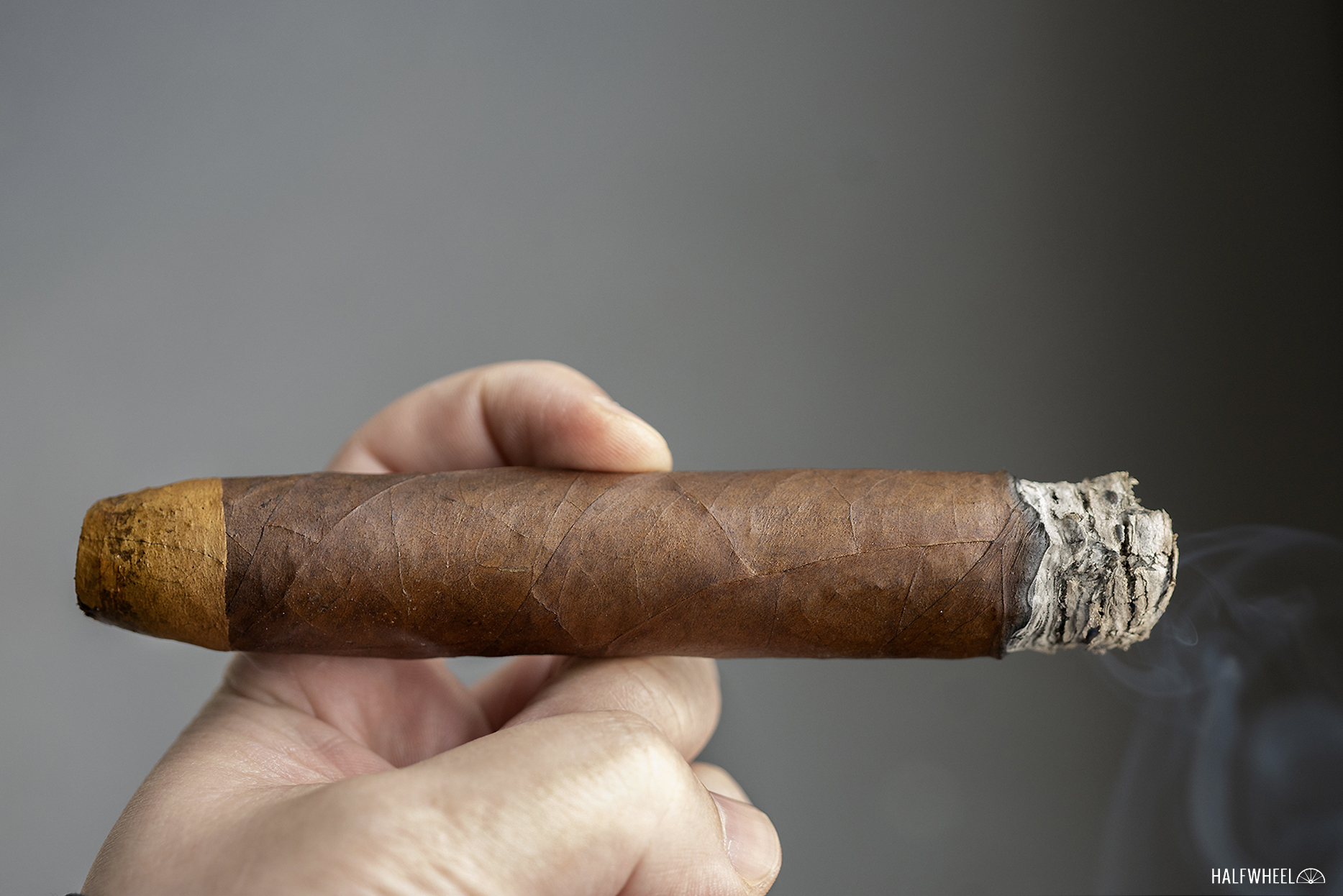 If you’ve been smoking cigars long enough, you’ve likely seen someone try to light a cigar from the “wrong” end. I suppose there’s no “wrong” end, rather, just the end that it’s designed to be lit from.

Earlier this year, Gran Habano became one of the rare cigar manufacturers to release a cigar that is purposely designed to be smoked from either end. The cigar is called the Persian King Type-Mod 60, an extension to the company’s Persian King line. It’s a 6 x 60 diadema that uses a Nicaraguan tobaccos for both the binder and fillers, though that’s hardly what’s notable here.

Rather, the cigar is capped on both ends. Not only that, it is capped with Ecuadorian Connecticut tobacco instead of the Nicaraguan habano wrapper that is used for most of the cigar. If that wasn’t enough, one of those caps is a parejo like you’d see on a robusto, while the other cap is shaped like a torpedo.

Like the rest of the Persian King line, it is sold without bands and in 50-count cabinets. It has an MSRP of $7.60 per cigar. 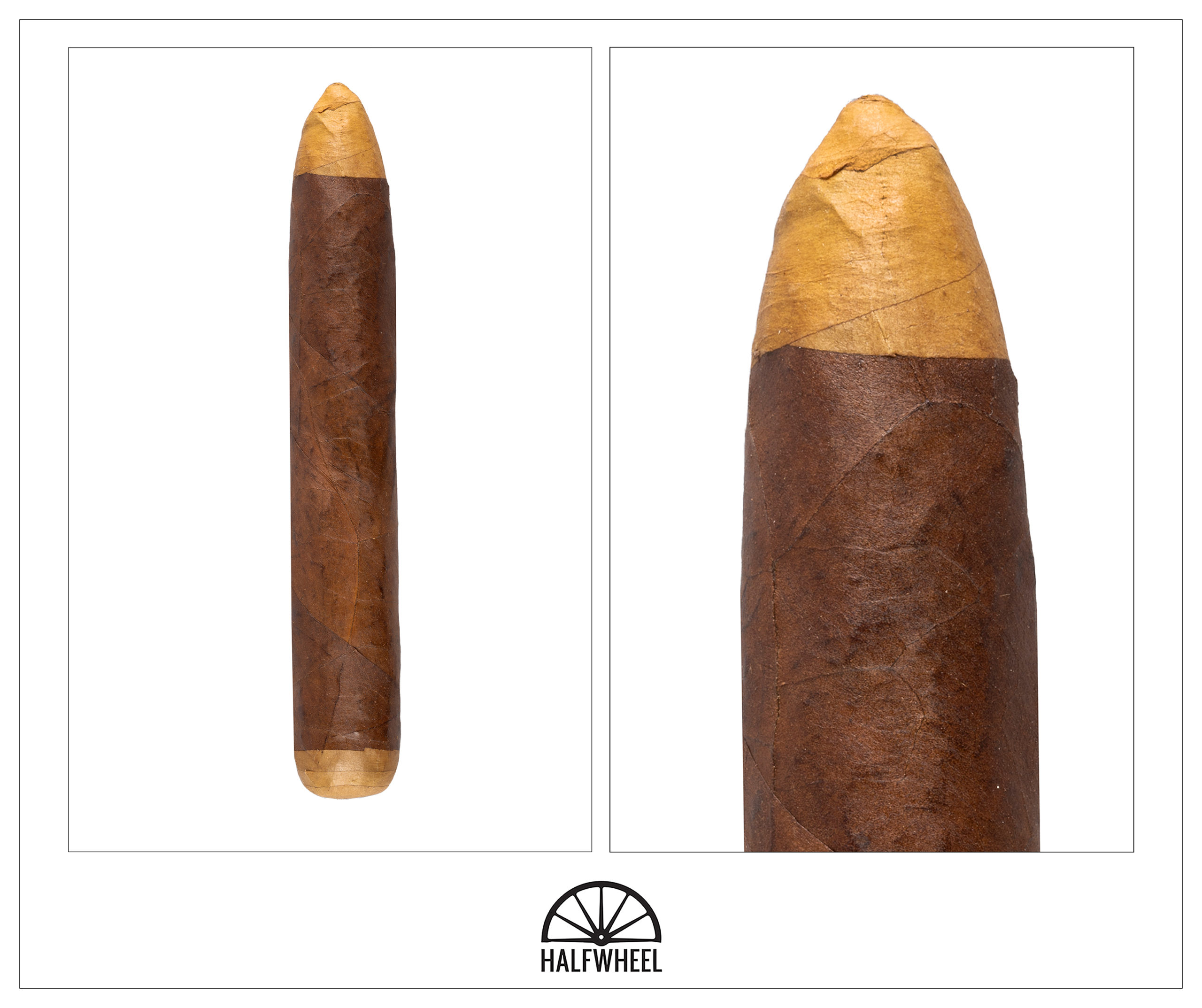 This is one of the more unique-looking cigars you are ever likely to see, particularly on a shelf at a retail store. Not only is it double-capped—itself a rarity—but the caps are a contrasting color. The vitola is basically a very large diademas, meaning there’s a parejo-style cap and a tapered foot—err, other end—akin to a perfecto. The main wrapper looks like a corojo varietal—turns out it’s habano—with a decent amount of oils and some reds breaking through, while the caps are very clearly Ecuadorian Connecticut shade with a milky, mustard brown color. All three cigars feel quite heavy in the hand, though there’s a slight amount of give, and I notice one cigar has a bit of a divot about halfway down the length of its body. The darker wrapper is mild-medium intensity-wise with some scents that remind me of a pile of dried leaves in the fall, some manure and acidity. I can’t really pick up anything from either end of the Connecticut shade caps. And then there’s the question of the day: which end to cut? After spending a few minutes thinking about how best to do this review, I decided to smoke each cigar the same way, cutting the tapered end like a torpedo. Cold draws are medium intensity-wise, there are some floral, oak and stale water flavors. One very interesting aspect is the complete lack of airflow—something that isn’t always the case with double-capped cigars. If I take a cold draw like a normal cigar, there’s basically no flavor because of the lack of airflow. Creating a slight gap between my lips and the cigar allows for just enough airflow that I’m able to taste some flavors.

If you’ve never smoked a double-capped cigar, the start of it is an interesting process. Like I would do with a cigar with a covered foot, I take extra attention to make sure that the end of the cigar is fully ignited, as I find cigars with covered feet oftentimes have an issue where only the foot ignites and the filler does not. That’s not something that happens here, but the lit cap looks a lot different than a lit foot of a cigar. The first puff has a tight draw, albeit nowhere near as bad as the cold draw. Flavor-wise, there are deep and rich flavors of cedar and oak. The cedar not only outlasts the oak, but also gets much more aggressive. It’s very rich but slightly rough around the edges. Underneath, there are nuttiness and midler flavors of toastiness, leather, creaminess and, on some puffs, black pepper. The finish has toastiness, nuttiness, creaminess and black pepper. Everything is pretty intertwined and everything is easy to pick up on, but there’s a bit of roughness. Retrohales have bread and grain flavors over creaminess and lemon. During the finish the lemon picks up a lot, particularly on my tongue, but I also taste some wheat bread as well. During all three cigars, I find that some retrohales are incredibly flavorful and a bit smoother than the main flavors, then there are other puffs where I can barely taste anything during a retrohale. During the first third, flavor is full, body is full and strength is medium. While I make it through the first third without any need for a touch-up, there are some signs that there’s excess moisture in the cigar. One area is that the draw always feels a bit tight—but not in a normal way—despite the relatively thick ring gauge. Smoke production is massive whenever I take a puff and the ash forms into thick, one-inch-long chunks.

The sharp cedar remains the main flavor during the second third of the Gran Habano Persian King Type-Mod 60, though the intensity reduces as I get closer to the final third. Secondary notes include white pepper, creaminess, meatiness and some generic bread flavors. One weird note, the more I salivate, the more intense the pepper note gets. The finish has some weird butter-like creaminess, almost sour at times, along with harshness, sharp cedar and a very mild pear-like sweetness. Retrohales have cedar, walnut and a damp nutty flavor. While I think the level of flavor intensity reduces itself during the finish, it’s a much more aggressive profile with earthiness and nuttiness drowning out everything else. Each flavor has a unique edge to it that reminds me of smoking a cigar fresh off the table. Flavor is full, body is full and strength is medium-plus. There are some touch-ups needed to help parts of the cigar that aren’t burning as quickly as others, something that isn’t all that surprising. One thing that is a bit odd is that the cigar seems to really accelerate its burn rate during the second third. 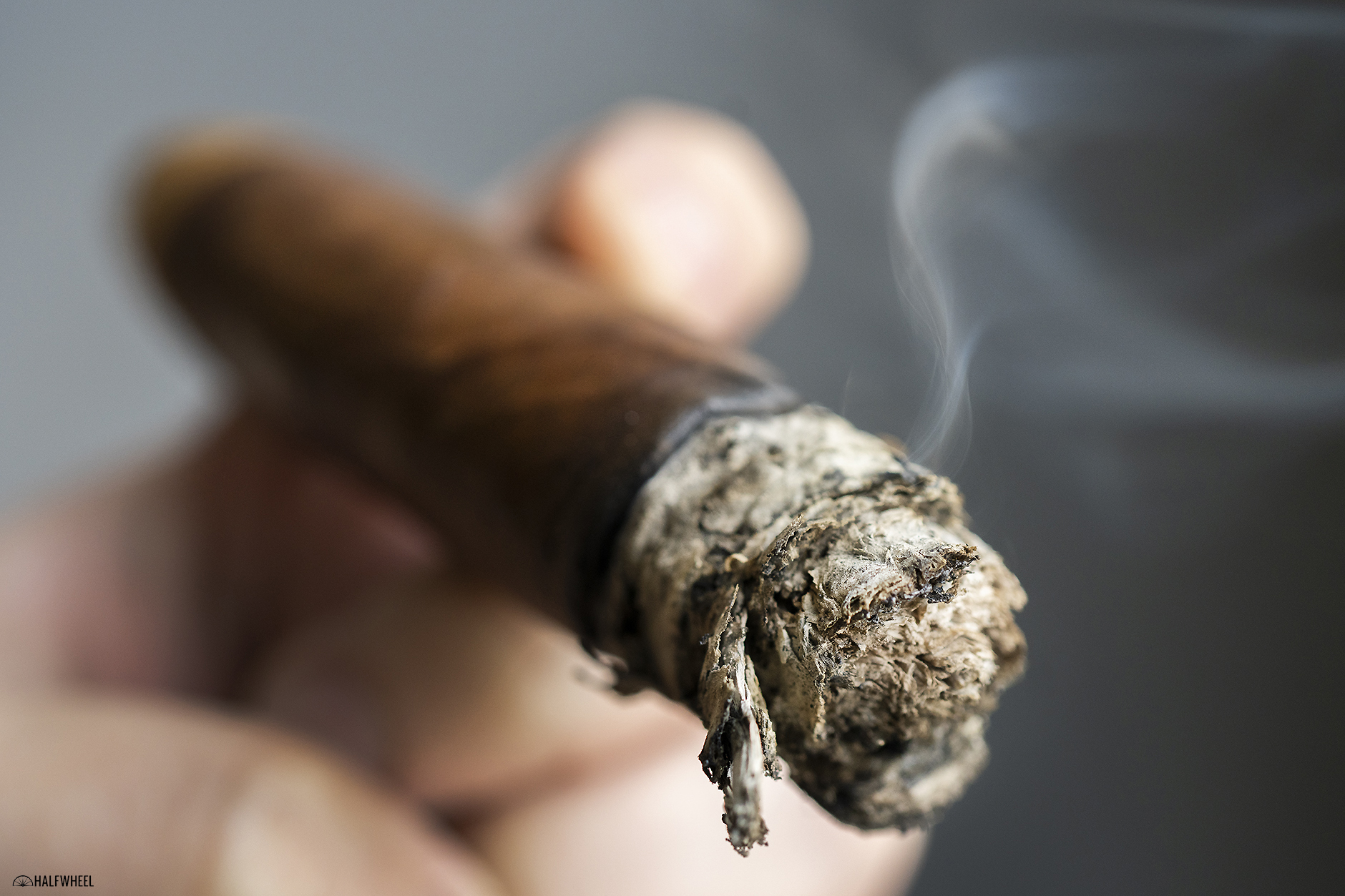 While there’s still this edginess that has been present from the start of the Gran Habano Persian King Type-Mod 60, the final third’s flavor is very different from the first two thirds. At times, I could be confused to think that I’m smoking a cigar that only uses an Ecuadorian Connecticut wrapper. There’s a familiar sharp nuttiness, a creaminess akin to any number of Connecticut shade-wrapped cigars, sunflower seeds and white pepper. Unlike the previous thirds, the intensity of the flavors are more defined: the nuttiness is stronger than the creaminess, which is stronger than the sunflower seed, which is stronger than the white pepper. The finish has a much more balanced approach: nuttiness and creaminess are on top, sunflower seeds are very much a secondary flavor and there’s some underlying tartness. Retrohales are also remarkably different than before: sourdough bread and leather over creaminess and something that reminds me of the quinine sensation of tonic water. They finish with a very dry nuttiness that overwhelms the sourdough bread and leather flavors. Even a minute after the smoke has left my nostrils, it feels like the nuttiness is getting stronger. Flavor is full, body is medium-full and strength is medium-full. The burn rate and smoke production both reduce in their respective aspects. Neither is an issue, but uneven burns continue to cause needs for touch-ups. 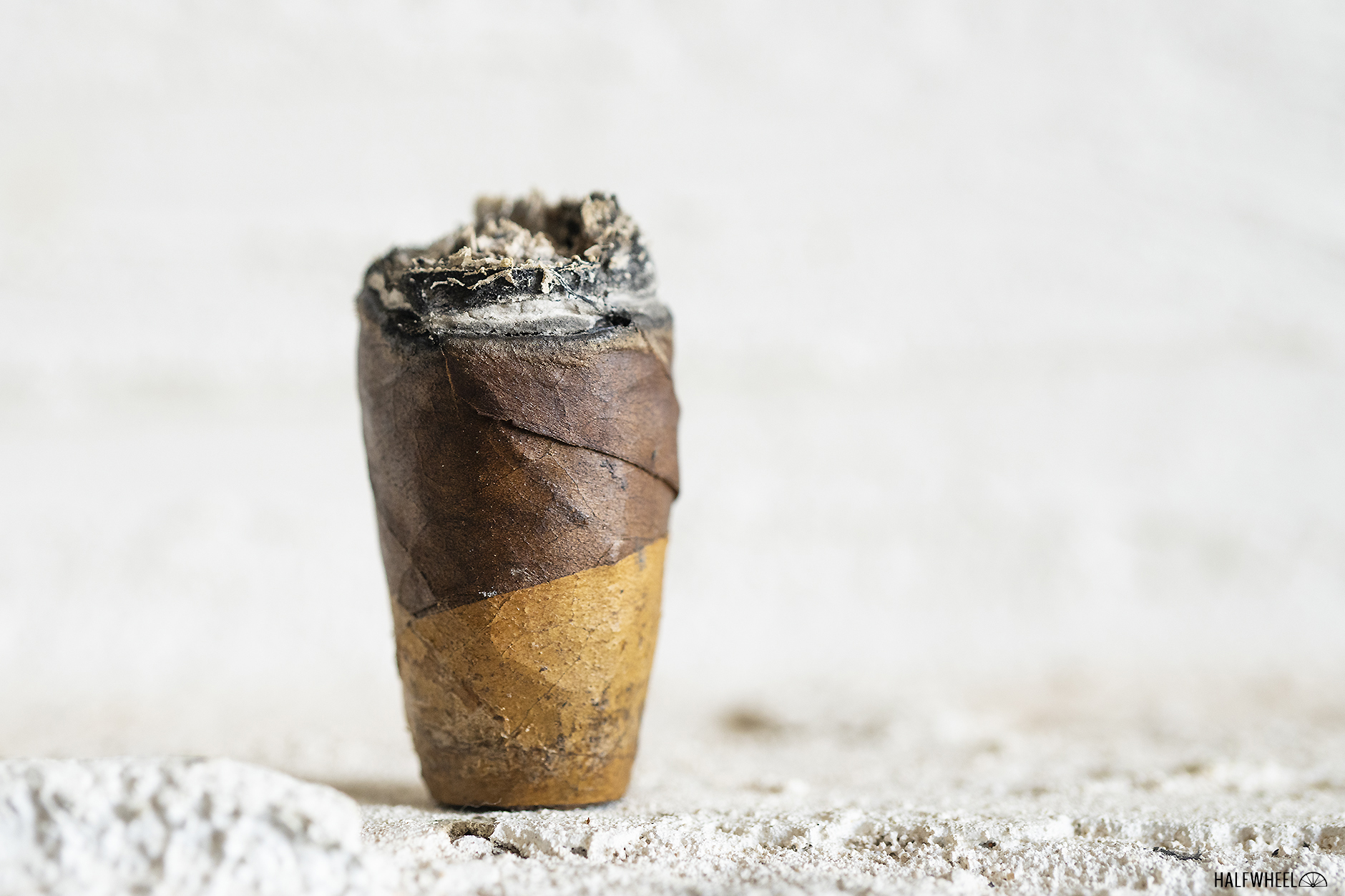 The Gran Habano Persian King Type-Mod 60 is a cigar that I find incredibly useful and will recommend to just about every cigar smoker. It’s not because of how good it tastes, but rather how it tastes, specifically like a cigar that is relatively fresh off the rolling table. When cigars are being made, there’s extra moisture added to the tobaccos to help make them pliable enough to be bunched and rolled. Smoking a cigar fresh off the table means that moisture is still in the tobacco and while you can generally get a good sense of how the cigar will taste once that moisture has left the cigar, I always find a sort of edginess and extra intensity to the flavors—sort of like going a bit too heavy on an Instagram filter—that isn’t there once the cigars have been properly aged in an aging room. The Persian King Type-Mod 60 replicates a lot of these sensations, but without the two largest hassles of smoking cigars fresh off the table: a. you need to be at a cigar factory, b. the excess moisture means the cigars won’t burn as well. While I had a few burn issues, I found the cigar to smoke more like a normal cigar, but the flavors reminded me of a cigar from a rolling table. It’s a different smoking experience—one that I found fairly enjoyable—but one that I think lots of people would find very educational.