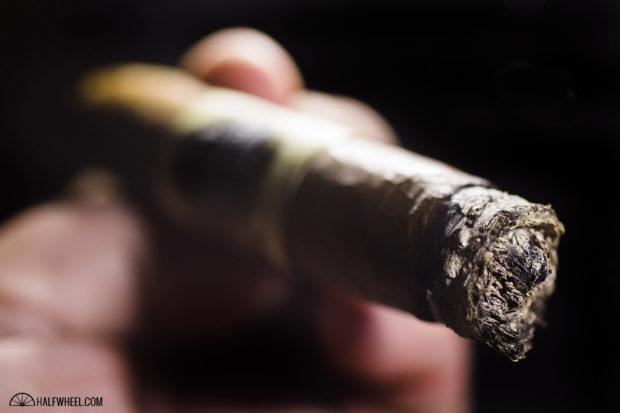 Back in December, we reported on two new lines coming from Gran Habano this year, La Conquista and Los Tres Reyes Magos, both of which are expected  to be released at this year’s IPCPR Convention & Trade Show in July.

The more traditional of the two new lines is La Conquista, a cigar that incorporates wrapper and binder from Nicaragua along with filler tobaccos hailing from and Colombia, Costa Rica and Nicaragua. The line is expected to launch with three different sizes packaged in 20-count boxes, and all of the cigars are being rolled at the company’s G.R. Tabacaleras Unidas S.A. factory in Honduras.

La Conquista will be released in three different vitolas: The La Conquista is covered in a mocha brown wrapper that features both some tooth as well as a touch of oil. In addition, there are multiple vines running up and down the length and the cigar has some nice give to it when it is squeezed. Aroma from the wrapper is a combination of sweet oak, creamy leather, manure, fresh ground coffee and pepper, while the cold draw brings flavors of aromatic cedar, sweet citrus, barnyard, earth and black pepper.

Starting out, the La Conquista features some of the same flavors found in the cold draw, including sweet cedar, earth, leather and green peppers, as well as a touch of black pepper on the palate. I notice some orange citrus on the retrohale, as well as a soft indeterminate sweetness in the finish. After a straight cut, the draw is excellent with just the right amount of resistance, while the burn is razor sharp so far. Overall smoke production is about average off of the foot, and while the strength is well integrated but fails to hit the medium mark by the end of the first third. Unfortunately, the orange citrus from the first third disappears completely by the start of the second third of the La Conquista, leaving the same sweet cedar as the dominant note, followed by flavors of dark cocoa, leather, earth, licorice and crackers. The profile is slightly more creamy overall, and I am noticing a thin nuttiness that is only present on the finish, but it is just not strong enough to really enjoy. Construction-wise, the draw remains excellent, and while the burn is not razor sharp anymore, it is close enough not to matter. By the end of the second third, the Gran Habano seems to be picking up strength, and it easily hits the medium mark. The final third of the La Conquista Gran Robusto is an almost carbon copy of the second third, with a sweet and creamy cedar note dominant interspersed with leather, earth, dark chocolate, espresso beans, yeast and tobacco. One notable change is the black pepper, which returns to the retrohale with a vengeance, decreasing the creaminess in the profile. The sweetness is still not a major player, but both the burn and the draw continue to impress and the smoke production has actually increased a bit. Strength-wise, the Gran Habano hits a point slightly above the medium mark, and remains there until I put the nub down with about an inch left. After smoking three samples, I can safely say that while the Gran Habano La Conquista has flavors that are distinct on the palate—especially the orange citrus that was present in the first third—it is a blend lacking in complexity. Having said that, the construction on all three samples was quite good, and while the strength was noticeable, it never became detrimental to the profile. An enjoyable cigar, and one that I can recommend trying, but it is not something I would go out and buy boxes of.