On the list of cigars that could be considered staples of retail humidors, I’d venture to include the three core lines of Gran Habano in ones to consider; the Connecticut No. 1, Habano No. 3 and Corojo No. 5. They cover three core flavor profiles, are available in a number of sizes, and are fairly wallet friendly.

If one of those has emerged as the most popular of that trio, I’d be inclined to bet it’s the Corojo #5. From my experience, it’s the most distinctive of the bunch, not just because of its strength but because it manages to maintain balance and complexity. Building on the line’s popularity, for several years Gran Habano has released a limited production version of the Corojo No. 5, the Gran Reserva.

First and foremost, each Corojo No.5 Gran Reserva release is made using the top 10 percent of the yearly leaf crop, which is then aged for an extra 7-8 years prior to rolling. Once rolled, the cigars receive an additional aging of between 4-6 years, according to a statement from the company. For the Gran Habano Corojo #5 Gran Reserva 2012, the company says that the cigars received an additional three years of aging, longer than any other prior Gran Reserva release.

While time has used to help smooth out the blend, it hasn’t come at the expense of strength, as the company still calls it a full-bodied blend, with a Nicaraguan wrapper and binder encasing Nicaraguan and Costa Rican tobaccos in the filler. Unlike the regular Corojo No.5 line, which is available in approximately 15 sizes, the Gran Reserva is made in just five, all in 20-count boxes and produced by the G.R. Tabacaleras Unidas S.A. factory in Honduras:

While specific production numbers are not available, the company estimated that there would be about 200,000 cigars released in total. This Gran Reserva comes dressed in a cedar sleeve stamped several times with the phrase “Gran Reserva 2012”, with the primary band also indicating the year, along with a small piece of ribbon at the foot that has a gold embossing of 2012. It’s not the most elaborate of presentations, but it definitely communicates what’s the cigar is. Once the cedar is removed, a slightly darker than medium brown wrapper is revealed, fairly even in color except along the seam lines and showing a good number of veins with just some oily sheen. Inspecting the cigar’s roll quality reveals some more oils, as well as that it’s a generally firm cigar, rolled seemingly well with very little give to be found and a well-applied cap, if somewhat at an angle when viewed from the front. There’s more sweetness off the foot than I would have expected, slightly meaty with a teriyaki glaze and backed by some tightly integrated pepper. The cold draw on the first sample is also looser than I would have expected as well as with less outright flavors. There’s a bit of sawdust at first taste but it quickly picks up some red chili pepper flakes for kick and a very thin bread component for body, though the loose draw seems to eradicate its staying power. One sample has a particularly long lingering tingle, something neither of the others had.

The Gran Habano Corojo No.5 Gran Reserva 2012 Gran Robusto generally starts off on a mild, almost pepper-free note in the first sample, while the second seems to have a red chili pepper component that goes right after every nerve in my mouth where it can cause some ruckus and the third is a tick up from that. The first retrohale has a bit of the red chili pepper to it, not overpowering but proof that a pint is all that is needed to really tingle the nostrils. By the one-inch mark there is some creaminess developing, and the profile is beginning to round itself out while staying very easy, almost gentle on the palate at its mildest and only slightly tingling the tongue at its relative fullest. The tail end of the first third sees a bit of caramel sweetness come in, diluted a bit by the creaminess but very enjoyable, reminding me a bit of the glaze on a tres leches cake or plate of flan. The burn, draw and smoke production have all been fantastic thus far. 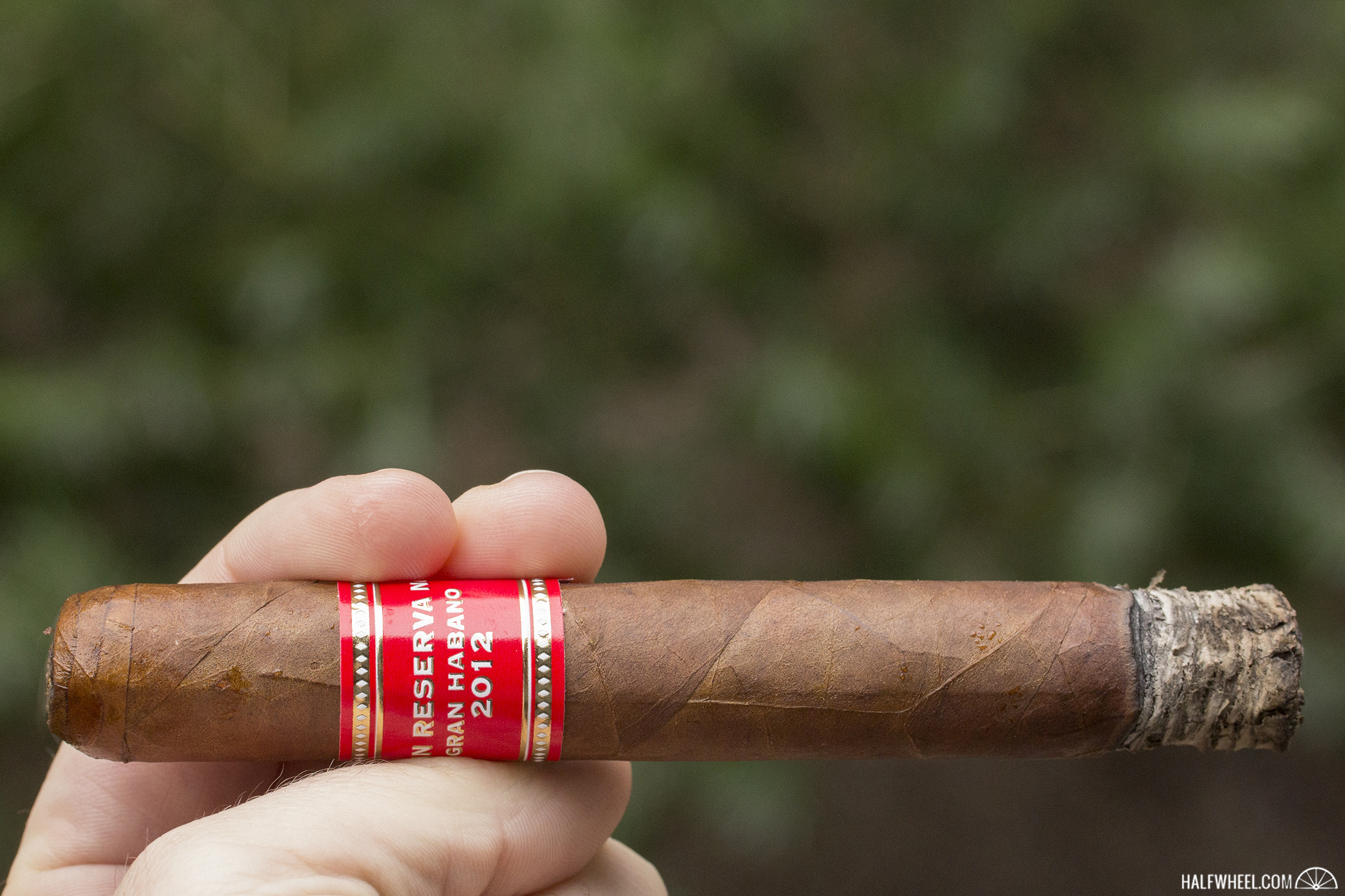 The start of the second third of the Gran Habano Corojo No.5 Gran Reserva 2012 Gran Robusto is where I feel like I have become fairly familiar with the blend, and much like a stretch of a long car ride with someone where not much is said, the initial puffs don’t have me writing down many words. There is some still some pepper to be found in the fuller samples, though I’d peg the cigar at medium at the moment, enjoyable but far from full-bodied. At the midway point, the sweetness has ramped up a few ticks and is now the focal point of the flavor, particularly so in the first sample which is head-and-shoulders ahead of the other two in this respect. A bit of chalky earth begins to make its way into the background of the flavor, not long after, disrupting the flow a bit but steering the cigar towards what would seemingly be its more staple flavors. Sweetness carries the Gran Habano into its final third, while the burn line is even, smoke production plentiful if a bit thin. It’s now in medium-plus territory, led by a bit more tongue tingle from some building red chili pepper flakes. It’s just after the start of the final third when I get hit with the first true package of flavors I’d even think to associate with corojo as the flavor gets a couple of ticks fuller and more black pepper forward. The smoke also begins to change its texture, and while it’s not gritty, it’s lost much of the smoothness that it had through the first two thirds. White pepper begins to take control of the profile, continuing the changes that have made this the most progressive third of the cigar by far, while the finish becomes increasingly toasty on the lips. There’s a bit of irritation in the final inch-plus, not so much pepper but a bit of roughness in the back of the throat coming simply from the smoke itself. Thankfully it is fairly fleeting and far from a defining characteristic, other than to note that it’s not any easier on the eyes, as the smoke becomes a quick-acting irritant when the breeze shifts. The finish is the most pepper-forward the cigar has been to this point, and probably the fullest flavor profile, medium-full by my gauge with a somewhat thin body holding it back from stepping into full territory. The final puffs maintain a sharp burn line, plenty of smoke production and no issues with the draw. Having a pair of cigars like the Gran Habano Corojo No.5 and Corojo No.5 Gran Reserva provides a great option for any cigar enthusiast looking for two different spins on largely the same blend; smoke the former for the fuller experience or light up the latter for a much smoother yet still engaging profile, and both at a very reasonable price. While I appreciate the age of the 2012 edition of the Gran Habano Corojo No.5 Gran Reserva, there is a thought that it might be too much, nudging it just far away enough from the Corojo No.5’s core profile, though there is something to be said for experiencing what a bit more time and rest can do to a blend. Personally, I’d take some of the previous incarnations of the Gran Reserva over this one, but it’s hard to feel let down with the 2012 version as it still has plenty to offer the senses.