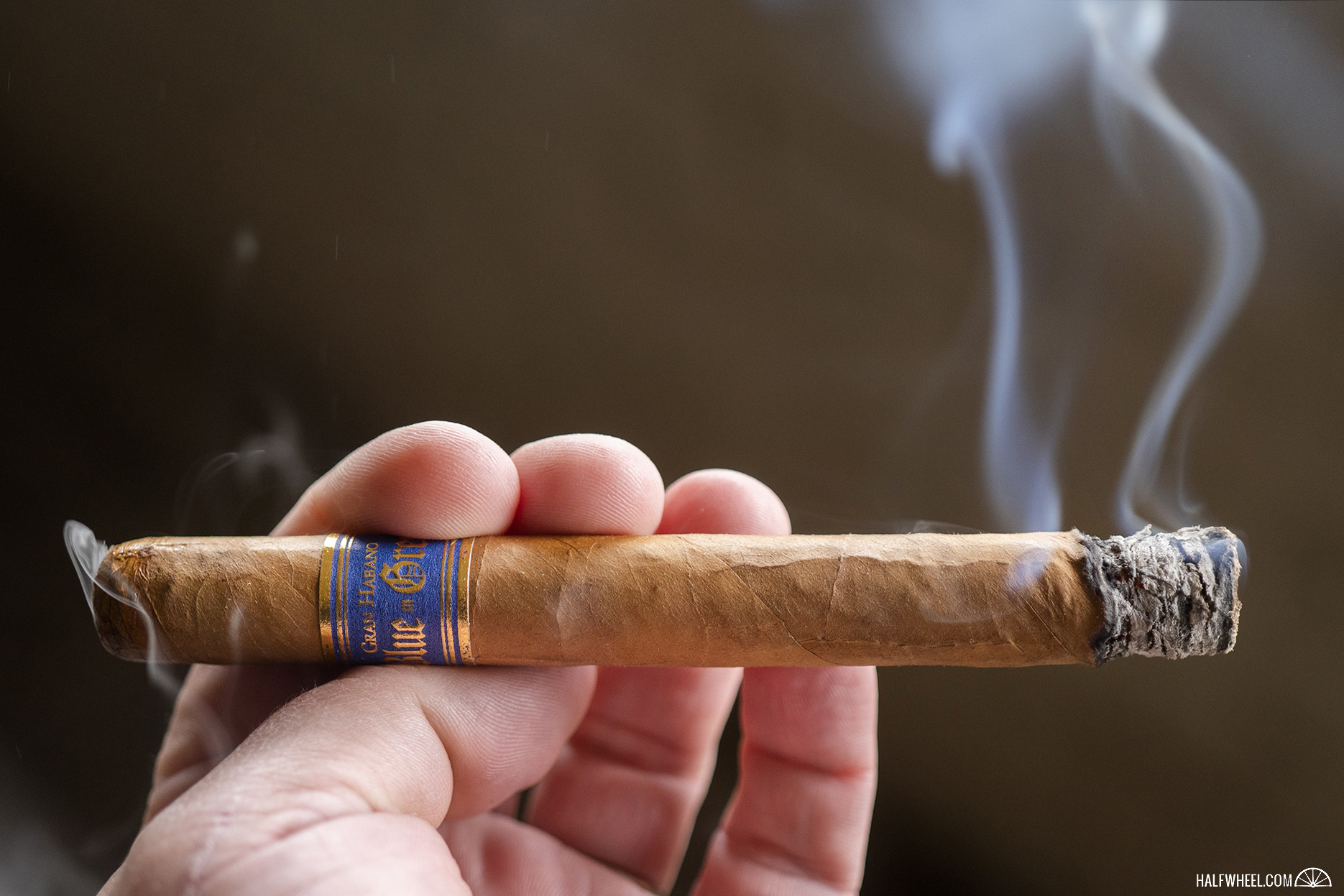 In June 2018, Gran Habano announced a brand new line named Blue in Green, which the company described as a medium-bodied cigar blended to embody “the rich nuances of its fillers.” The first three vitolas debuted during the 2018 IPCPPR Convention & Trade Show, albeit without the bands they would eventually wear.

Then in May 2019, the company announced it would be releasing the line’s first limited edition vitola, a 6 x 44 Corona. The blend remains the same, meaning a Connecticut wrapper covering Nicaraguan binder and Nicaraguan fillers, with the cigars rolled at the company’s G.R. Tabacalera Unidas factory in Honduras. The company has limited production to 1,000 boxes of 20 cigars, with single cigars having a retail price of $9.

There are now four different vitolas in the Blue in Green line:

The Gran Habano Blue in Green Corona began shipping to retailers in August after being shown off at the 2019 IPCPR Convention & Trade Show. I can’t deny that the Gran Habano Blue in Green Corona is easy to identify, with its combination of band and cedar wrap taking up at least 80 percent of the visual real estate. After taking the latter off, I can see a gorgeous-looking light brown wrapper that is smooth to the touch and features a small of oil as well as a number of bumps running up and down its length. Aroma from the wrapper is extremely fragrant, with notes of strong cedar, apple cinnamon, herbs, pepper, leather and barnyard, while the cold draw brings flavors of the same cedar, less apple, cinnamon, pepper, cinnamon, dark chocolate and a touch of floral.

Immediately after lighting the foot, the Blue in Green Corona features dominant flavors of both cedar and leather, followed by dark chocolate, espresso beans, butter, hay and a small amount of cinnamon. While I am noticing a small amount of caramel sweetness the retrohale, it is overwhelmed at times by a combination of white pepper and spice, although the latter begins to recede quickly as the first third burns down. Construction-wise, the draw is excellent after a straight cut, but the burn has issues almost out of the gate and I am forced to touch it up quickly. The overall strength shows no signs of taking off unexpectedly and ends the first third just about halfway between mild and medium. Unfortunately, both the apple and cinnamon notes from the first third are long gone by the time the second third of the Corona begins, leaving behind the same cedar and leather as the dominant flavors. Those are followed by notes of hay, dark chocolate, roasted coffee beans, peanuts, cloves and barnyard, while both the spice and white pepper on the retrohale have decreased noticeably. The draw remains excellent but the burn continues to give me minor issues, resulting in another touchup right after the halfway point. Strength-wise, the cigar has moved a bit closer to the medium mark, although it ultimately falls just shy of that as the second third draws to a close. The final third of the Gran Habano brings a nearly exact experience as that of the second third: dominant flavors of both cedar and leather—although the former seems to be more creamy in nature than before—followed by lesser flavors of bitter dark chocolate, creamy hay, coffee beans, cloves and generic nuts. While there is a bit more caramel sweetness noticeable on the retrohale, there is almost more white pepper, resulting in a bit of a balance issue between the two at times. Once again, the draw gives me no issues whatsoever, and once again, the burn line has to be touched up, albeit just once. Finally, the overall strength increases noticeably compared to the second third, hitting a point slightly above medium by the time I put the nub down with a little more than an inch remaining.

After smoking the Blue in Green Gran Robusto that is in contention for this year’s Top 25, I was really looking forward to a repeat performance from the Corona. Unfortunately, that was not to be. Where the Gran Robusto was a flavor bomb of complexity and nuance, the Corona is noticeably more pedestrian—especially after the first third—with dominant cedar and leather notes that never really waned as the cigar burned down. Each of my three samples had to be touched up at least once, and while I did not experience the amazing construction that Charlie did with the Robusto vitola, there was never a time when I thought it would get out of hand. In the end, if you are looking to try the Blue in Green, pay a bit extra and go with the Gran Robusto, which should be a bit easier to find as well.